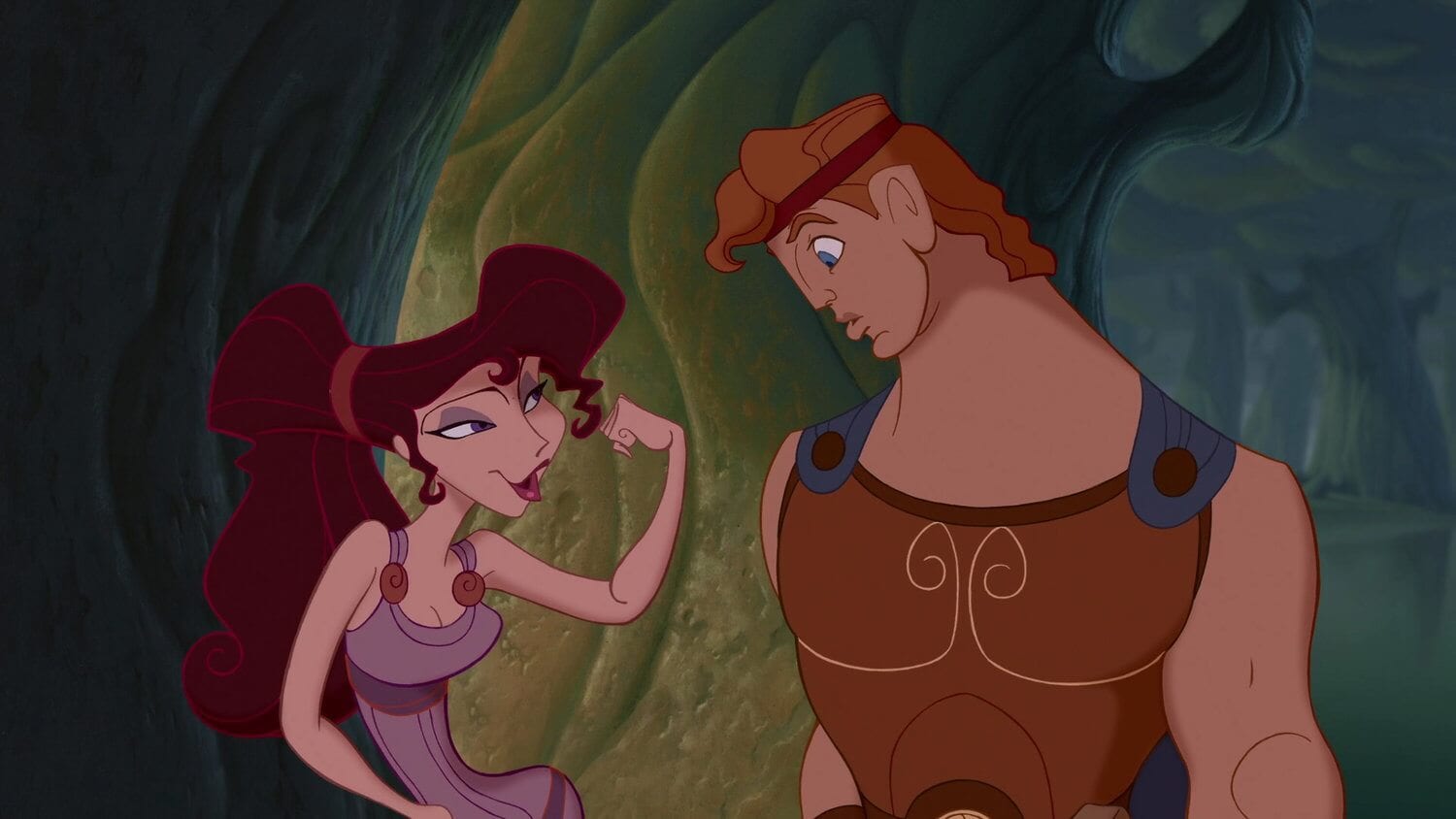 In our review of Disney’s The Hunchback of Notre Dame, I discussed the character of Esmeralda a little, and it gave me an idea. A while back, I ranked Disney Princesses with the intent of writing an additional piece on the animation studio’s other heroines, and today I’d like to do so. These can include princess characters that Disney doesn’t include as official Princesses, such as Kida or Eilonwy, but Pixar and live-action characters will be excluded this round. 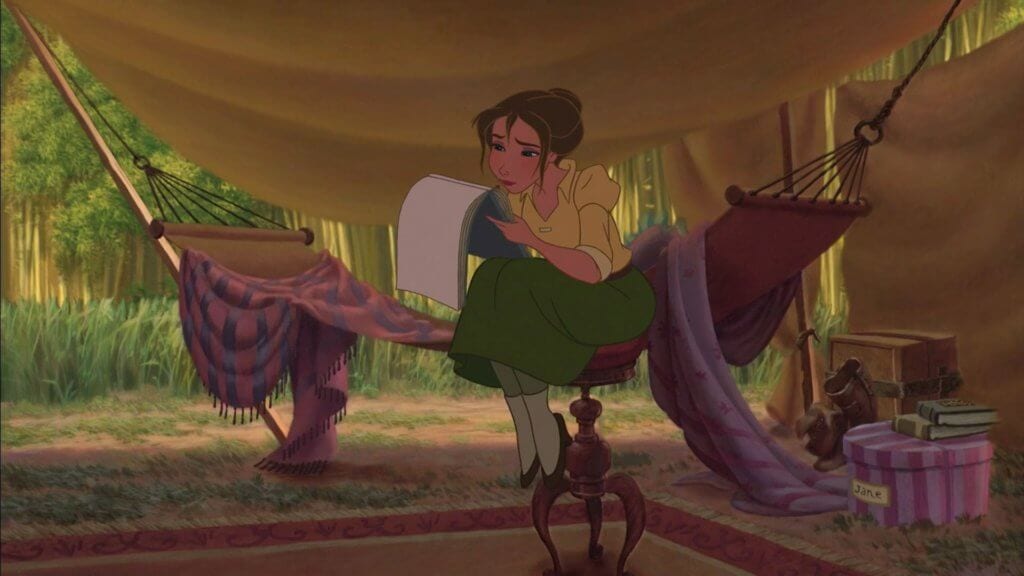 Disney’s version of Jane Porter is kind of an odd bird. She’s smart and artsy, but not great in social situations and totally inept at surviving in the jungle at first. Unlike Edgar Rice Burroughs’ American blonde vision for Jane, the animated incarnation is inexplicably British, brunette, and exceedingly quirky. While changing her national origin and hair color has no bearing on the story or the character’s quality, I actually like the other changes made a lot. In Tarzan of the Apes, ERB’s first Tarzan novel, Jane is very much the archetypal damsel in distress, developing gradually through the continuing novels into something of a badass. In a time as politically correct as the 90’s, I’m surprised Disney’s Tarzan didn’t just thrust this character development on her before it was warranted. As she appears in the film, Jane has many talents and strengths, but they all relate to hobbies she had at home in England, like drawing and teaching Tarzan to read. She’s very weak physically and frequently gets rescued, but in turn, teaches Tarzan everything there is to know about the strangers like him. This leads to some of the best moments in the movie. In the film’s finale, she is also shown to be a little more capable in terms of making her way through her new home. A lot of Jane’s quirkiness likely comes from Minnie Driver’s performance, as supervising animator Ken Duncan incorporated her body language and facial expressions into the character. Jane is pretty but a little unconventional, with chubby cheeks and some ditzy expressions. This is also likely thanks to Duncan, who animated other appealing-but-odd-looking characters like Hercules’ Megara and Captain Amelia from Treasure Planet. It’s nice to get such a unique character mixed in with badasses like Mulan and Megara, and I also really appreciate character designs like Jane’s. Disney’s character designs rarely push the envelope as far as DreamWorks or Pixar, let alone studios like Laika or Aardman. Disney is at times too focused on making sure their heroines look beautiful rather than distinguished or original. As such, little details here and there like an overbite or frizzy hair are much appreciated. 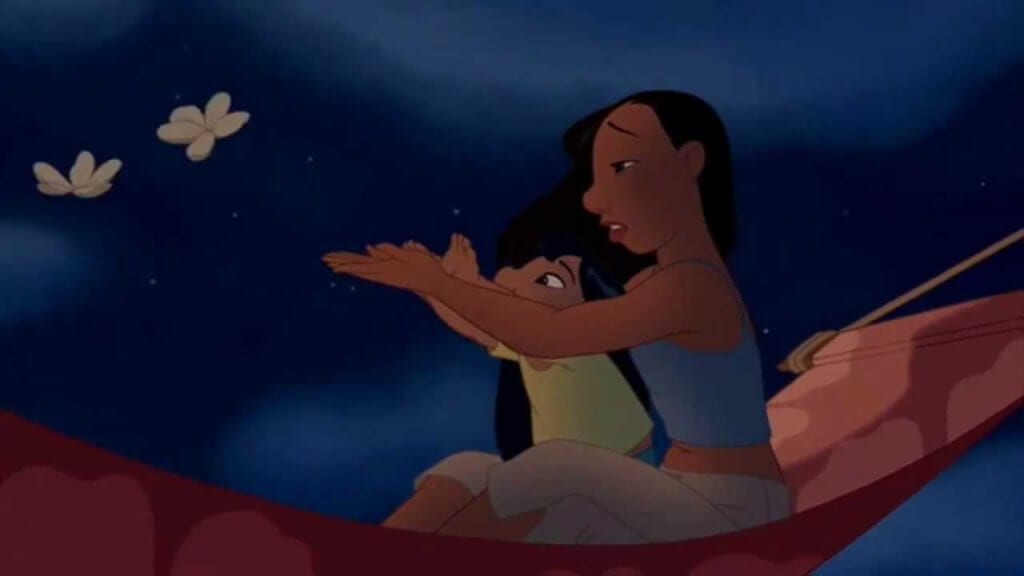 Lilo & Stitch balances its sci-fi premise with themes of family, isolation, and redemption. Stitch, the destructive and rude yet still cute and fluffy alien, could be the subject of his own article about character development. However, before he even enters their lives, sisters Lilo and Nani are struggling to make ends meet and stay a family after their parents died. This is made more difficult both by social workers who don’t think Nani is a suitable provider and by the sisters’ inability to see eye-to-eye on occasion. Nani is only 19 and unexpectedly has to take on the role of mother after the death of their parents. It’s even implied that Nani had to give up competitive surfing to get a day job and support Lilo. She also keeps David at arm’s length despite a mutual attraction both because she’s busy and to keep Lilo’s life as simple as possible. Younger sister Lilo displays traits of autism or perhaps even Asperger’s Syndrome, being very unconventional and unable to fit in with her classmates. Additionally, she has tantrums, making strange noises or falling on the floor. The film never belittles her problems, though, or treats her like just a dumb kid. Their relationship is as complicated as they are as individuals. In fact, it’s made more so when Stitch does show up, fulfilling Lilo’s wish for an “angel” to be her friend. Many have argued that the conflict the sisters face in trying to understand each other and stay together is more interesting than the dilemma Stitch faces, or his bond with Lilo. I don’t really agree with that assessment, but it speaks to the power of well-developed familial relationships in these films. Vocal performances courtesy of Tia Carrere and Daveigh Chase are also fantastic and instrumental in fleshing out the characters.

Judy has the distinguished honor of being the only animal character to make this list! She’s also the only character from the Disney Revival period, although this is because many of Disney’s great female characters this past decade have been princesses. As her parents say, Judy has always been a trier. Her goal is to become an officer in the Zootopia Police Department; she would be the first bunny cop, a notion that provokes childhood bullying. Nonetheless, she achieves her goal and is even valedictorian at the police academy. But my favorite thing about this character is her dynamic nature and willingness to re-assess her own beliefs. Judy starts out in Zootopia seeing the way that people stereotype and pigeonhole her, but never once questions her own assumptions about other people and groups – that is, until she spreads misinformation about the spread of a disease, making it out to seem like predator species are the only ones capable of “going savage.” Judy’s best friend Nick calls her out on this well-intentioned but harmful remark, and we see how it divides the citizens of Zootopia, spreading hatred and xenophobia. This turn of events comes well into the film and after the false ending of accusing and arresting Mayor Lionheart. This is where Judy’s character arc really kicks in, as she’s forced to re-evaluate her own values and what they say about her. This is a rare, complex message for a film like this. Yes, there are plenty of family films and series that advocate equality and friendship across backgrounds. However, Zootopia is very smart and sophisticated in its approach to its message. I admire that everyone, even the heroic lead, is a little bit guilty of bias. But the film isn’t all doom and gloom about its themes, either. Zootopia ultimately takes a very positive position in saying that we can all do better and make the world a better place for it. Once Upon a Time’s Ginnifer Goodwin is delightful as Judy, bringing life to her strong moral backbone and emotional breakdowns alike. 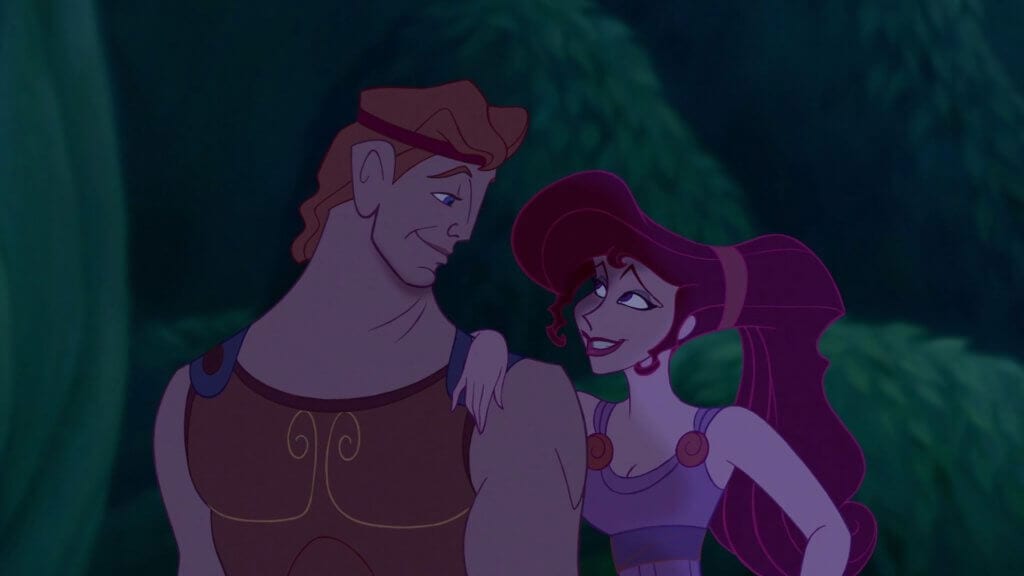 Megara also has Ken Duncan as her lead animator. As such, she resembles Jane a little, especially around the eyes. She gets the best song in Hercules, her actress Susan Egan is a Broadway legend (who originated the role of Disney’s Belle on Broadway), and she has a well-defined, interesting, and dynamic personality. Meg essentially starts out as a henchwoman to the main villain, Hades. She came to his service by way of selling her soul to save her boyfriend, who then left her for some other girl. She tells Hades she’s sworn off manhandling, and only agrees to help him sabotage the “wonder boy” when Hades makes it clear that this would earn her freedom. However, trouble arises for Meg when her seduction goes a little too well; Hercules falls hard for her, and the feeling is mutual. This leads into her aforementioned musical number, “I Won’t Say I’m In Love.” In addition to being musically gorgeous and visually appealing, this song explores so well the conflict the character is experiencing. She doesn’t want to fall in love again because of the fear that she’ll get hurt again, a notion she expresses directly to Hercules after their “date.” She maintains her sassy persona, but transitions from a bitter loner to a genuinely sweet, caring person. She even risks her own life, temporarily dying to save a weakened Hercules from a collapsing building. This act of selflessness and love is underplayed in favor of his visit to the Underworld; nonetheless, it’s a great scene and really displays how much she cares about him. Meg is definitely one of Disney’s most unique characters, particularly as a leading lady. 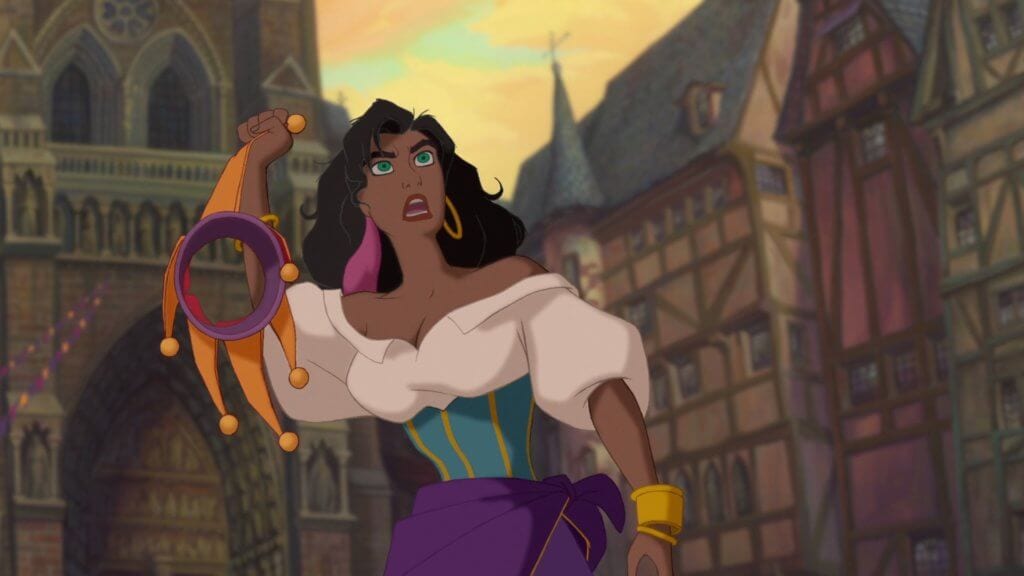 Esmeralda gets the top spot for many reasons, not the least of which is her moral compass and sense of justice. To a religious hypocrite like Frollo, she appears to be trash and a slut, defined by her ethnicity and the clothes she wears. However, the film presents us with a very different character, one who values the lives and well-being of her people and all under-protected groups above all else. Esmeralda, seemingly an agnostic herself, nonetheless prays to Mary to intercede on behalf of God’s forgotten children. As with Meg, this leads to one of the film’s best scenes, although “God Help the Outcasts” is in a better movie with more such moments. Esmeralda’s selfless prayer is presented in contrast to Frollo’s fire and brimstone theology, but also that of the regular churchgoers. Adorned in gold and fine fabrics, they pray for love, fame, and glory. The Hunchback of Notre Dame presents a complicated view of religion. Good people like Emseralda, Quasimodo, and the Archdeacon stand to one side, with Frollo and these selfish worshippers on the other. Esmeralda’s interest in justice and the less fortunate isn’t limited to the Gypsies, either. She’s the only one to stand up for Quasimodo at the Festival of Fools, outwardly defying Frollo and the guards at her own risk. In spite of having seen the suffering of others, and of her personal hardships faced daily, Esmeralda maintains a sense of humor. This is seen in her interactions with Phoebus, and even at the festival during her provocative performance. She’s also a very vivacious, sensual woman. I’m surprised they were willing to display it to this extent in a Disney film, though they would similarly do so with Megara. I think it’s great, and further distinguishes them from other Disney heroines. 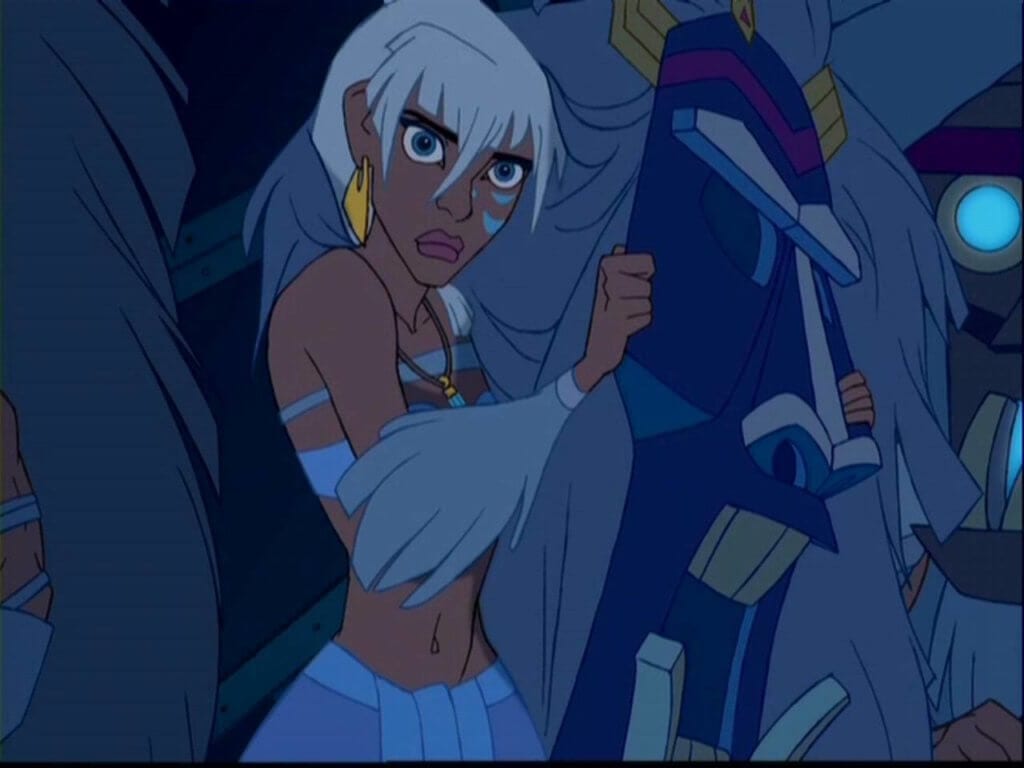 Atlantis is an imperfect but underrated film overall. Kida is an honorable mention for her sense of honor and loyalty to her people and her father. However, she doesn’t make the list because she doesn’t have much of a character arc herself. We also don’t get to know her as well as the other ladies on the list.

Alice is an intelligent, funny young girl who comes off as very likable and relatable. I don’t have any problem with her arc or personality, but the ladies on the list simply offer more distinguished and complex personalities.

Thanks for reading! What Disney topic or list would you like to see next? Drop your answer in the comments and make sure to bookmark Geeks + Gamers for all your geeky news, reviews and more!