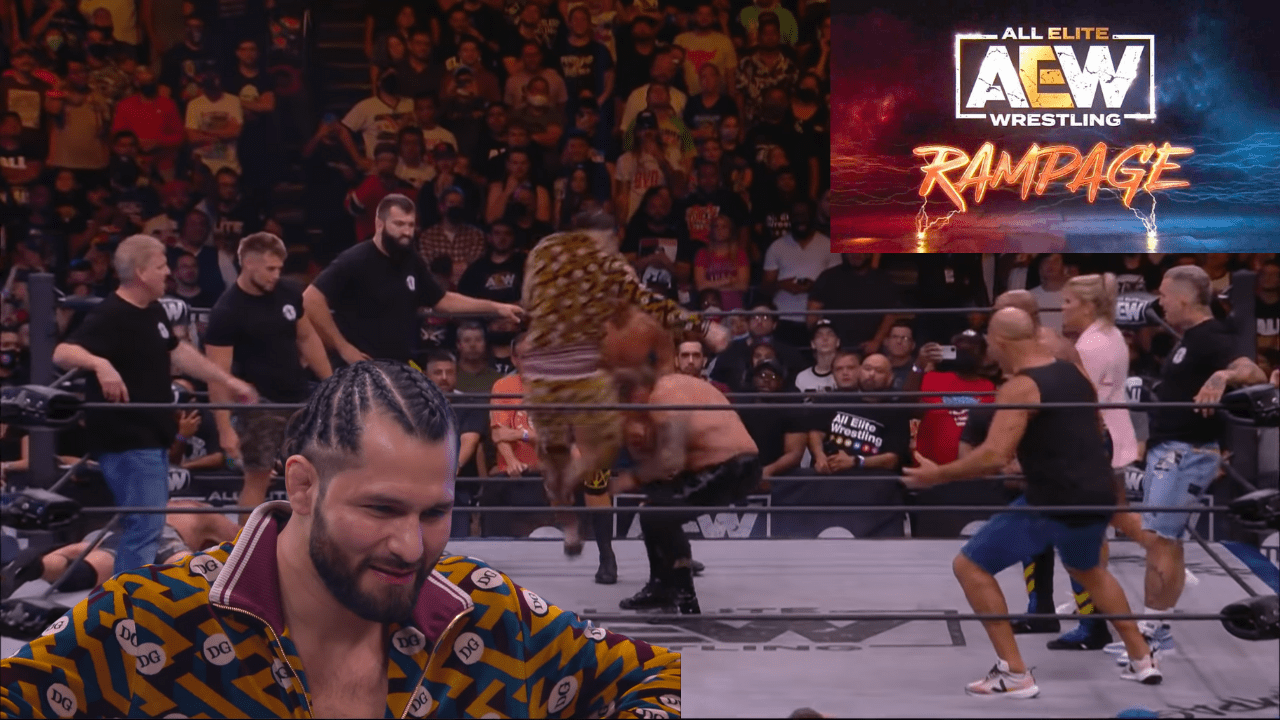 AEW’s Grand Slam Dynamite and Rampage shows were tremendous successes. Both nights had 20,144 in attendance, with 18,300 paid for a $960,000 gate, the third largest non-WWE Pro-Wrestling event in American history. And they were treated to a headline-generating angle on Rampage (taped after Dynamite on Wednesday) that made the mainstream world take notice.

Chris Jericho and Jake Hager were involved in a high-profile beatdown following their match with “Men of the Year” (Ethan Page and Scorpio Sky.) It involved MMA stars Paige VanZant and Austin Vanderford, former UFC Heavyweight Champions Junior dos Santos and Andrei Arlovski. Their head coach Dan Lambert (founder of American Top Team) has aligned himself with Men of the Year. Everyone got their licks in on Hager and Jericho (including VanZant). But the crescendo came when the BMF Champion, Jorge Masvidal, threw a recreation of the flying knee that knocked out Ben Askren at UFC 239 in 5 seconds, connecting with “Le Champion.”

Masvidal got a huge pop from his appearance, and the knee looked very good in the confines of the ring. Jericho was busted open, maybe hard-way or gigged, but clearly, this is a hot angle that will set the stage for something bigger. Jake Paul isn’t going to get his wish to fight the incredibly based Masvidal (check his Twitter for proof of concept @GamebredFighter), with Dana White swatting away the little pest. Considering White’s ignorance of American Top Team’s involvement with All Elite Wrestling, we may see more great stuff like this soon with more UFC talent. When he found out, he had nothing but praise for the hottest pro-wrestling brand in the world. This is the good type of celebrity involvement, not weirdo rappers and flaky “influencers.”

Awesome article. Please do more AEW articles. It’s nice to see a well informed perspective on here when it comes to AEW.

Thanks Thomas, really appreciate that. It’s been a product that I have enjoyed since it’s inception and been following the guys there since the New Japan/Ring of Honor days.

Be on the lookout for more coverage; AEW is bringing back the fans who loved the glory days of 1990’s All Japan tape traders, ECW/WCW Work-rate guys from the late 90’s, the 2000-2004 WWE fan and older Jim Crockett NWA/WCW fans who value realism over bombastic character work. I like where they are going and how they are getting there. Simple, straight ahead booking that if something doesn’t work, they change it to make it work.