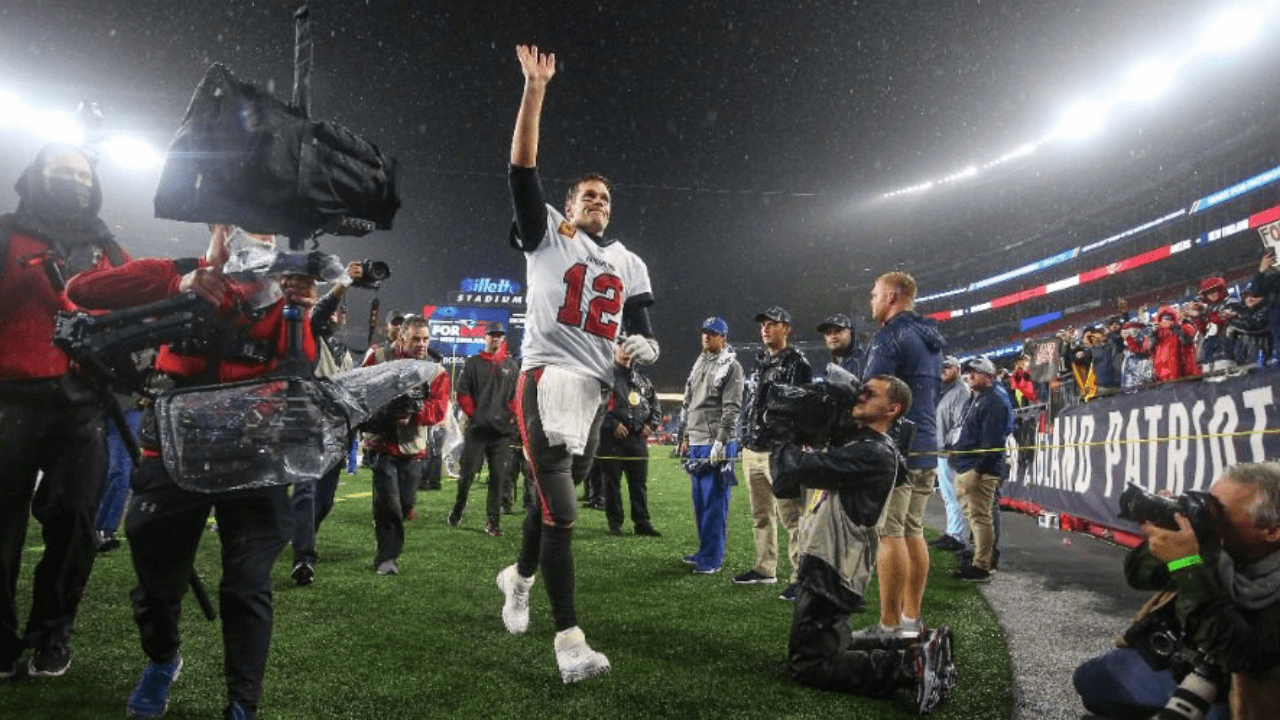 There are now only two winless and one lone undefeated team left in the NFL after Week 4. While the combined sum of all the games did not match up to the theatrics of the past couple of weeks, it was always to be headlined with the Sunday night game, featuring the conquering hero making his triumphant return to the home to which he had bestowed relevance over the past two decades. Did it live up to expectations? We will see!

This marks the 19th straight loss for the Jaguars (matching the second-longest streak in history, held by the 2007-2009 Detroit Lions and the 1961-1962 Oakland Raiders while in the AFL), but it was not because they did not put up a good fight.

Holding the game close, everything came down to the last-second field goal by Evan McPherson to spoil Urban Meyer’s Ohio Homecoming. McPherson drilled the 35-yard field goal as time expired, negating the rushing assault of the Jaguars (putting up 202 yards on the ground). Trevor Lawrence did not throw a pick for the first time in his young career, so that is a positive. But this was the Joe Burrow show (348 passing yards and 2 TDs), and everyone was invited, especially Tyler Boyd, snagging 118 of the yards through the air.

What has been interesting about the outcome of this game has been the afterparty that went down. Head coach Urban Meyer, calling the loss “heartbreaking,” decided to drown his sorrows with a lovely young lady at a club over the weekend while his wife was at home with the grandkids. For a written account of the story, the New York Post has a great retelling of events here, and Ryan has a full-blown video below on the Sports Wars channel.

The streak is over. Zack Wilson can call himself a winner in the NFL thanks to Matt Ammendola punching through a 22-yard field goal in overtime. The Jets went after Ryan Tannehill, sacking him seven times, with much of the disruption coming from D-lineman Quinnen Williams. Tannehill still managed to grab one more yard than Wilson (throwing for 298 on 49 attempts), but yardage has to be Derrick Henry’s middle name, snatching up 158 rushing yards on 33 carries with a strike. He has a legitimate shot a snagging 2,000 yards this year.

In the modern era, Patrick Mahomes becomes the 4th quarterback to start the season with 3+ touchdown passes in each of the first four games. Andy Reid collected his 100th win as head coach of the Chiefs in a game that was never in doubt past the second quarter.

Mahomes had 5 TD passes in total, three going to Tyreek Hill, and 186 yards from 11 receptions of Patrick’s 24 completions and 278 passing yards. Clyde Edwards-Helaire makes it back-to-back 100-yard games on the turf with 102 on the day.

Jalen Hurts had a big day for the Eagles (387 yards and 2 TD passes, also the leading rusher with 47 yards on eight carries) but the boy cannot do it all by himself.

Dak Prescott threw 4 TDs, and Ezekiel Elliot rushed for 143 yards with a score of his own as the defense was ruthless on Sam Darnold, getting to the Panthers pivot five times.

Saquon Barkley showed up when it mattered in overtime, punching in a 6-yard plunge to take that annoying “0” out of the G-men’s record.

Daniel Jones threw for 402 yards with a pair of touchdowns. Kenny Golladay was Jones’ prime benefactor, as he seized six catches for 116-yards.

Jameis Winston was ineffective against the Giants on defense. A measly 226 passing yards and one score got him platooned with Taysom Hill, who had punched in two rushing touchdowns but threw a pick when he would interject into the game. Alvin Kamara broke into the 100-yard rushing club, putting up 120-yards on the turf inside the Superdome for their first 70,000-fan game since the government locked everything down.

This game was brought to you by the fine folks at Lunesta.

Detroit, jealous of Jacksonville tying their winless streak on Thursday, decided to do them one better by handing a rookie quarterback his first professional win by not bothering to try. Jared Goff was the only outlier, passing for 299 with 2 TDs, but it is hard to do much surrounded by a roster full of bums.

David Montgomery’s 106 rushing yards and two touchdowns did the heavy lifting for the Bears, attempting to make up for last week’s mugging Fields had to endure. Unfortunately, Montgomery picked up a knee injury and had to leave the game; he will have his knee MRI on Monday, so his status for Week 5 at the Raiders is currently unknown.

I do not know what the Texans did to deserve this ass-whooping, but it was brutal on both sides of the ball.

Josh Allen had a pedestrian performance, tossing a pair of touchdowns and, at one point, giving way to Michael Trubisky (who ran in a 10-yard scamper for a touchdown in the blowout) to work garbage time. On defense, the Bills snagged 4 Davis Mills passes, held him to 87 yards passing, and sacked him three times.

Now the Texans understand how a date with DeShaun Watson feels when it is all said and done.

The Colts clawed the first victory of the season from the injury-riddled Dolphins. Nothing memorable happened, but Carson Wentz had his best performance as a Colt, throwing a pair of touchdown passes to Mo Alie-Cox on 24 of 32 passing.

Matt Ryan’s 4 TDs (3 of which went to Calvin Ridley, one a 42-yard strike) could not contain the tenacity of Taylor Heinicke’s late-game heroics. With 33 seconds on the clock, down three, Heinicke hooked up with J.D. McKissic for a 30-yard touchdown to put the Teamers ahead for good.

Jimmy Garoppolo was knocked out of the game with a calf injury, allowing newcomer Trey Lance to start the second half, and he did… fine, tossing 50-50 ball (9/18) for 157 yards and 2 scores in the air, adding 41 yards rushing. Deebo Samuel did not seem to mind who was under center, as he put up 156 receiving yards and catching both Lance-passing touchdowns.

Russel Wilson did enough to win the game. Throwing two and scoring another on the ground was enough to get past their NFC West rivals. They will have to bring their A-game next week as they host the Los Angeles Rams for the Thursday night game.

The Cardinals are looking like the most dominant team in the NFL at the moment, perhaps compensating for the awful season the Diamondbacks just wrapped up in the MLB.

Kyler Murray had an efficient day in, on, or around the pocket, going 24/32 for 268 in the air with 2 TDs. Chase Edmonds averaged 10 yards/carry on his 12 opportunities, racking up 120 on the ground.

Matt Stafford, knowing how to put up stats in games that are ultimately out of reach, grabbed a couple more passing TDs for the season, but it just wasn’t enough to stop the Cards this day, resulting in the first loss of the season for the Rams.

If someone could help out Ben Roethlisberger, that would be wonderful. Normally, the only helpless old man wanders around the White House and not the Steelers locker room, but after the shock victory over the Bills, the Steelers have been looking all out of sorts.

Jeopardy’s own Aaron Rodgers and Randall Cobb rekindled their relationship, hooking up for a pair of touchdowns that proved the difference as Shailene Woodley’s boyfriend poked into the endzone for a rare rushing touchdown these days.

Justin Tucker, not satisfied with his record-breaking kick from last week, decided he would simply be the leading scorer for the Ravens and singlehandedly win the game on his own. He might be the greatest kicker to play the game before it is all said and done.

Lamar Jackson put up more Madden-esque passing yardage, 316 (OH HELL YEAH) and passing for a touchdown. Le’Veon Bell, who had just been activated from the practice roster this week, was a total non-factor. But if the Ravens want to make a serious run at the dangerous AFC, he is going to need to get in there and show some of the flashes that made him such a focus of the Ravens defense all those years he was with the Steelers.

Teddy Bridgewater, who started the game and accounted for the only points of the day for the Broncos, was knocked (literally) out of the game with a concussion and was replaced by Drew Lock, who could not muster a thing against the suffocating Baltimore 11. Well, he did manage to complete a pass to cornerback Anthony Averett, so that is something.

The game everyone had circled since the schedule was announced in May was a bit of a dud if we are being honest. TB12’s return to Foxborough was met with a great ovation as he took the field, captured by Ryan here (as everyone knows, most of the Geeks + Gamers team was in Boston; plenty of coverage of the game can be found on Ryan, Jeremy, and Tuggs’ social media profiles):

It was full of highlights, to be certain, with Tom Brady entering the game only needing 68-yards to become the all-time passing leader, snapping the mark previously held by Drew Brees of 80,358. Brady did so by hitting wide receiver Mike Evans for a very odd 28-yard completion over the middle in the first quarter. Lyndon has a more detailed rundown of the milestone achievement here.

As for the game itself, well, Brady threw for 269 on an uncharacteristically poor performance in the scoring and efficiency categories (22/43 with no scores). On defense, Richard Sherman, who had signed earlier in the week, was active on the day and led the team in tackles and recovered a fumble to begin his Tampa tenure.

Mac Jones had a hell of a performance on the Patriots’ side of the ball, throwing an efficient 31/40 for 275-yards, with 2 TDs and 1 INT. Not all was well; Jones was sacked 4 times, and the Pats finished the game with -1 rushing yard. Yes, negative yardage on the ground.

Taking out the stats, the game wrapped up with a trademark, late-game comeback by a Tom Brady offensive drive. Ryan Succop drilled a 48-yard field goal just before the 2-minute warning to finally put the Buccaneers up for good.

Justin Herbert is playing like a man possessed, tossing up another 3 TDs to hand the Raiders their first loss of the season. Austin Ekeler’s 117 rushing yards and additional score secured the blowout for the Chargers. The game was never in doubt, with the Chargers scoring with 8:01 remaining in the 1st quarter and never looking back.

Derek Carr came back to reality, remembering what the name on the back of the jersey was and tossing 196-yards in the air, two scores, and getting put on the turf 4 times.

That does it for Week 4. Only the Cardinals survive to see if they can stay unbeaten, and the Lions and Jaguars hope to turn things around against some inter-division rivals on a stacked Week 5 schedule.