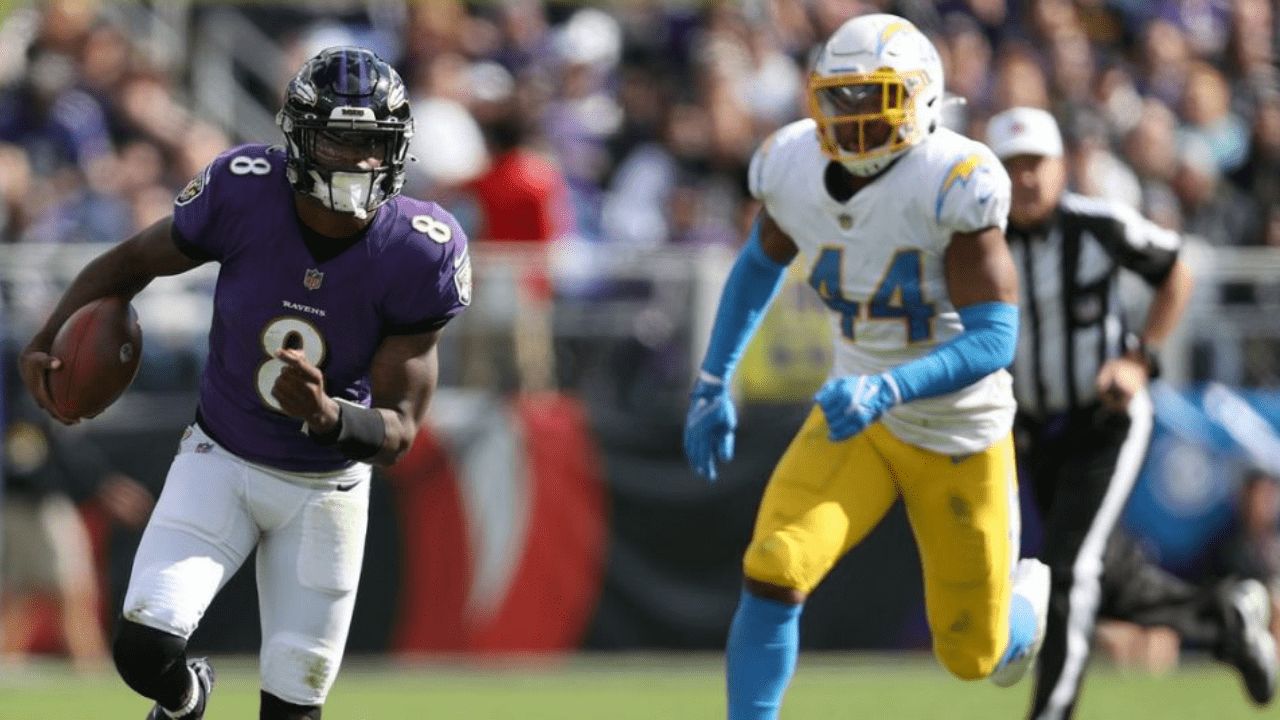 Week 6 of the 2021 NFL season is in the books. It’s the first week to have byes for 4 teams. This time around, Atlanta, New Orleans, the New York Jets, and the San Francisco 49ers are sitting out. So, in short, there were two fewer games, but the totals showed that there were more than enough points going around to make up for their absence.

Zack Ertz caught the only passing score for the Eagles in what proved to be the final game the Philadelphia legend would play. The next day, Ertz was shipped off to the undefeated Cardinals (spoilers) and will join that squad in their pursuit of their first Lombardi Trophy next week, at home against the hapless Houston Texans. Jalen Hurts ran in a couple of TDs, but the less said about his passing performance, the better.

On the other side of the ball, Tom Brady chucked 2 TDs up, and Leonard Fournette ran in a pair to put the Thursday-nighter on ice early.

The streak… is over. Halted at 20, the Jags finally picked up a win, but they had to do it across the pond in Tottenham Hotspur Stadium in merry old England; so, does it really count? Regardless, Matt Wright booted a 53-yarder on the final play of the game to break the tie and stop the slide. Urban Meyer can now head back home and party all next week with whomever he wants, as the Jags have the bye next week.

The game was full of shenanigans, with fans rushing the field to dab up the players before kickoff and a crazy blown call. It also marked the return under center for Tua Tagovailoa. He was very good, going 33/47 passing for 329 yards with 2 TDs and 1 INT, scrambling for an additional 22 yards on the turf. His Jacksonville counterpart had the best day of his young career. Trevor Lawrence threw 25/41 for 319 yards with a TD and NO INTERCEPTION! It was against the Fins, so don’t go getting the parade planned yet; you gotta make sure the coach won’t act up for consecutive weeks still. Baby steps.

The Bengals got back to their winning ways by keeping the Lions winless in the catfight with the ferocity of two strays going at it at the SPCA. Joe Burrows laid into the Detroit secondary, carving them up for 271 yards and 3 TDs, and Joe Mixon grabbed 94 on the carpet to keep the Blue and Silver down for another week.

Justin Herbert had a dogshit game, and where he goes, so do the Chargers. Justin was the leading rusher and passer on the day, yet combined only accounted for 207 yards combined. Baltimore is just that damn good.

Latavius Murray, Devonta Freeman, and Le’Veon Bell all punched into the endzone for a rushing TD. Lamar Jackson threw for another, yet tossed a pair of picks, but the ground game was the best game for the Ravens, 187 to 26 on the ground. You hate to see it.

Even with the circus going on with the Silver and Black, they managed to get it done – specifically, Derek Carr got it done, tossing for 341 yards and 2 TDs, including a bomb to Henry Ruggs for a 48-yard score in the 1st quarter to set the tone. Tack on a 51-yard grab by Bryan Edwards, and the Raiders weren’t letting the outside world affect their quest to reclaim the AFC West crown, which looks a lot more attainable now with the Chargers laying that egg.

Teddy Bridgewater, to his credit, tried his best to singlehandedly get the Broncos over the finish line, but when you get dropped 5 times and throw up 3 INTs, it’s tough going.

Patrick Mahomes got the Chiefs back to .500 with a dominant 2nd half, scoring 21 of the points to keep pace with the rest of the AFC West. 32/47 passing for 397 yards with 2 TD and 2 INTs was good enough for Mahomes, but that O-line needs to step it up, as he was dropped 3 times by a middling Washington pass rush.

Finally, one of these close games goes the Vikings’ way. Kirk Cousins connected with K.J. Osborn in the extra frame to cap off the day that the offense came to play – Cousins, going for 373 in the air with 3 TDs and Dalvin Cook coming back from an ankle injury to pick up 140 yards on the ground on 29 touches and a score of his own.

The Panthers didn’t have a ton of offensive standouts, but Kenny Robinson blocking a punt in the 3rd and returning it to the house set up Robby Anderson’s crazy ass to tie things up with 42 seconds on the clock to force the overtime frame they ultimately dropped.

In a match-up only a mother could love and the Texans offering an effort only a quadriplegic could be envious of, the Colts blew the doors off those clowns from South Texas from toes to titties.

Davis Mills, God love him, forced 2 picks on 43 attempts, and Mark Ingram regrets not re-signing with the Ravens,  having picked up 73 yards as the defense took the afternoon off.

Carson Wentz threw 2 TDs; one was a bomb to Parris Campbell for 51 yards, and Jonathan Taylor did his best to shoulder the entire load by scoring a pair of TDs, as well and picking up 145 rushing yards. Not a bad day from the offense, considering they were missing their most potent weapon on the wing, T.Y. Hilton, with a quad issue.

It was going to be tough for the G-Men, being short Saquon Barkley due to last week’s ankle injury in Dallas, but wow, someone’s gotta pick up the slack. Daniel Jones showed off his arm strength and compiled 242 yards and 3 INTs for his trouble. Thanks for hosting a fired-up Rams squad; it was nice.

The Rams are a scary bunch, and Matt Stafford is sensing that ring is a short few months away. He tossed 4 TDs on an efficient 22/28 passing, with 1 pick. These Rams are good.

It’ll be interesting to see how good the Packers truly are, as they crushed another can. So far, they have beaten 1 team with a winning record, that being last week at Cincinnati. Next week, hosting the Football Teamers is the last easy win as they head out to face the Cardinals in Arizona for the first tough match-up in a run of tough games for November. But Ellen threw a pair of TDs for the Pack against their historic rivals, who are experiencing some growing pains, to say the least.

Justin Fields would rather be anywhere else right now. He’s getting beat week in, week out like he’s pocketing money. Another 4 sacks, but he was able to get some help on offense by handing off the ball to Khalil Herbert 19 times as he picked up 97 yards. Send help soon.

If you think the Rams are good, the Cardinals handed them their lone loss and are only getting better. Kyler Murray is going to win the MVP at this pace, tossing 4 TDs, and the defense got to Baker Mayfield 5 times, momentarily knocking him out of the game. They beat the breaks off those kids and served them up to the Dawg Pound.

How ‘bout dem Cowboys? The back-and-forth affair, ending in a CeeDee Lamb 35-yard catch in the overtime frame, was easily the match-up of the weekend. Nothing wrong with Mac Jones and the future of the Patriots; eventually, one of these close games will go their way.

Damien Harris broke the 100-yard rushing plateau for the Pats, and Mac tossed a bomb 75 yards to Kendrick Bourne for the momentary lead with 2:11 left on the clock in the 4th. Some day soon, Playoff Football will return to Foxborough.

Dak Prescott is having a career year. 445 yards passing, 3 TDs, and CeeDee Lamb being the primary beneficiary on the day, collecting another TD prior to the game-winner and amassing 149 yards on 9 catches. The NFC has some deadly teams.

Without Russel Wilson, the Seahawks are in a lot of trouble. Geno Smith had an efficient start under center, completing 23/32, but getting sacked 5 times and coughing up the game-deciding fumble in overtime is a tough pill to swallow. Rumor has it that Seattle has reached out to Cam Newton, hoping that he might be the answer to keeping their season alive.

Big Ben is still looking a few steps behind. Not having a great game, but doing enough to keep the Steelers relevant in the AFC North.

The big story of the game is an unfortunate one. Seahawks defensive end Darrell Taylor was briefly paralyzed and had had to be carted off the field. The good news is that a day after, he was able to move all his extremities, but his return date hasn’t been announced.

Big night from the Boys in Double Blue. Derrick Henry got back into world-smashing form, scoring 21 points for the Titans with 143 rushing yards. Ryan Tannehill punched in a short 4-yard score but aired out a beauty to Julio Jones that went 48 yards to set up a touchdown. Not the longest play of the game; Henry unleashed hell in the 2nd on a 76-yard run that will be in the Bills’ nightmares for the rest of the week.

Josh Allen tried to do it all on his own, tossing a trifecta of TDs, but the Titans D took him to the turf on 3 separate occasions. They can regroup with the Week 7 bye before hosting the Dolphins on Halloween.

Lots of points, lots of close games down the stretch, but a great week for exciting games. One undefeated team remains, and one winless team stands alone at the bottom. It really would be something for the Lions to go winless in a season AGAIN for the second time in two decades, though.