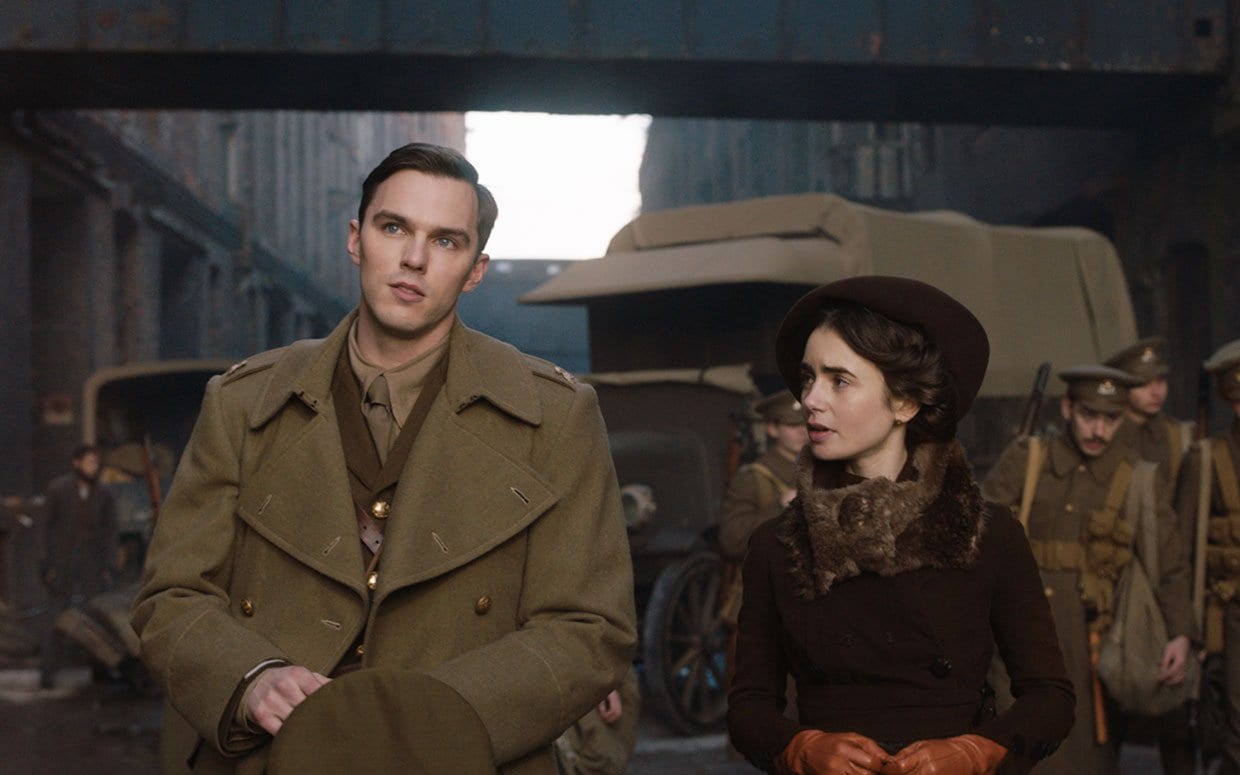 I’ve always been fascinated by a myriad of literary luminaries. Whether it’s J.M. Barrie (Finding Neverland), P.L. Travers (Saving Mr. Banks), or of course, William Shakespeare (All is True), the biopics of their lives give us insight into the works they bestowed on the world and inspire others to go forth and create. So when I heard they were making a biopic about J.R.R. Tolkien with X-Men: First Class’s Nicholas Hoult (who recently played J.D. Salinger in the Danny Strong-directed The Rebel in the Rye) in the titular role, I was instantly intrigued. There’s no denying the world’s perception of literature has changed since Tolkien’s day: the publishing industry is shrinking, ebooks are on the rise once again, and fantasy series are a dime a dozen, trying to either stand apart or be compared to George R.R. Martin’s Game of Thrones in the hopes of replicating the author’s success. Yet if you asked any fantasy author, including Martin, they will tell you how they are all standing on Tolkien’s shoulders, with Martin once referring to current fantasy authors as Tolkien’s grandchildren.

This legacy has been further cemented in part thanks to the efforts of legendary director Peter Jackson who has crafted two trilogies, the former culminating in a record 14 Oscar nominations. It would stand to reason, then, that the author himself would deserve the big screen treatment. However, that’s easier said than done, and there were many questions to answer before the audience could buy a ticket. In my view, the most important question is why Nicholas Hoult would be the ideal choice to once again inhabit an iconic author’s shoes.

Don’t get me wrong, I love Lily Collins and I can’t wait to see what she will do with the role of Tolkien’s lady love. However, seeing Tolkien on the screen is a moment all lovers of Hobbiton have been waiting for since the days of Frodo Lives. Casting Hoult in the lead role was a stroke of genius. I’ve been following his career since he joined the X-Men First Class cast as a last-minute replacement for Benjamin Walker. I was initially skeptical of whether he could pull off Beast; following in Kelsey Grammer’s footsteps is no easy task.

Regardless, he performed the role of Hank McCoy with aplomb and instantly became someone that I had to follow. While I wasn’t thrilled with his next franchise attempt, Jack the Giant Killer, I loved a lot of his other films, such as Warm Bodies and of course Mad Max: Fury Road. The latter is important, as it showed that in between various franchise fare he was always respectful to the fans. I’ll never forget when he joined an X-Men panel and a bunch of people were screaming “witness me”. He smiled, made the “witness me” gesture, and sat down to join his cast mates.

This has never been more clear than in his performance as JD Salinger. I’ll be honest, having watched the X-Men films and Fury Road more times than I can count, a part of me had almost forgotten he could play any other character.  When I saw him as Salinger, I instantly forgot about his other roles. It has often been said that The Catcher in the Rye’s Holden Caulfield was inspired by Salinger himself, and having read the book, I can say Hoult imbues Salinger with shades of Holden, experience he’ll need when he plays Tolkien.

There are a lot of parallels between Tolkien and Salinger, particularly when it comes to their love lives and war(World War I and World War II, respectively). They both had rather turbulent lives due to both their creative impulse and an inclination to serve their  respective countries. By the same token, their experience in war had a profound impact on their legendary tales, with Tolkien no doubt being influenced by the loss of several of his close war buddies on the battlefield, a tragedy that we can strongly infer informed the creation of the fellowship. The big difference, of course, is their approach to the writing life; Salinger put his sole focus on creating work in a shed for the remainder of his life post authorial success.

Aside from his writing, Tolkien was a linguistics professor, often engaging in literary discourse with The Chronicles of Narnia author CS Lewis. His primary goal had always been to further himself through education, Middle Earth having become an outlet to hone his linguistic skills. Yet, with the success of The Hobbit, there came a desire from his publisher for a sequel about hobbits. Tolkien dove back into his Middle Earth mythology and thus, Frodo’s quest to rid middle earth of the One Ring was born.

Interestingly enough, Lord of the Rings was not a runaway success when it was released in 1954, having not achieved true success until the sixties. So often in these biopics about writers, we see the creative struggle and the work comes out to massive acclaim and the authors life changes nearly overnight. Yes, that often is the arc of these types of films, but it’s clear that although Middle Earth was his life’s work, it was not his life. Through all the hardships of his life(his mother and father dying and to a degree, the war), it wasn’t necessarily Middle Earth that kept him going but rather his love of education. If the filmmakers are approaching this film correctly, it will serve not only as a celebration of Lord of the Rings, but of what someone can achieve when they devote their lives to academia.

The Tolkien biopic is shaping up to be an exciting prospect. With Nicholas Hoult on board to once again play an iconic author, I can’t wait to see how his experience playing Salinger will inform his portrayal of the progenitor of the modern fantasy genre. Although Game of Thrones now rules the fantasy landscape, it’s great to see the creator of the Elfin language finally getting his due.