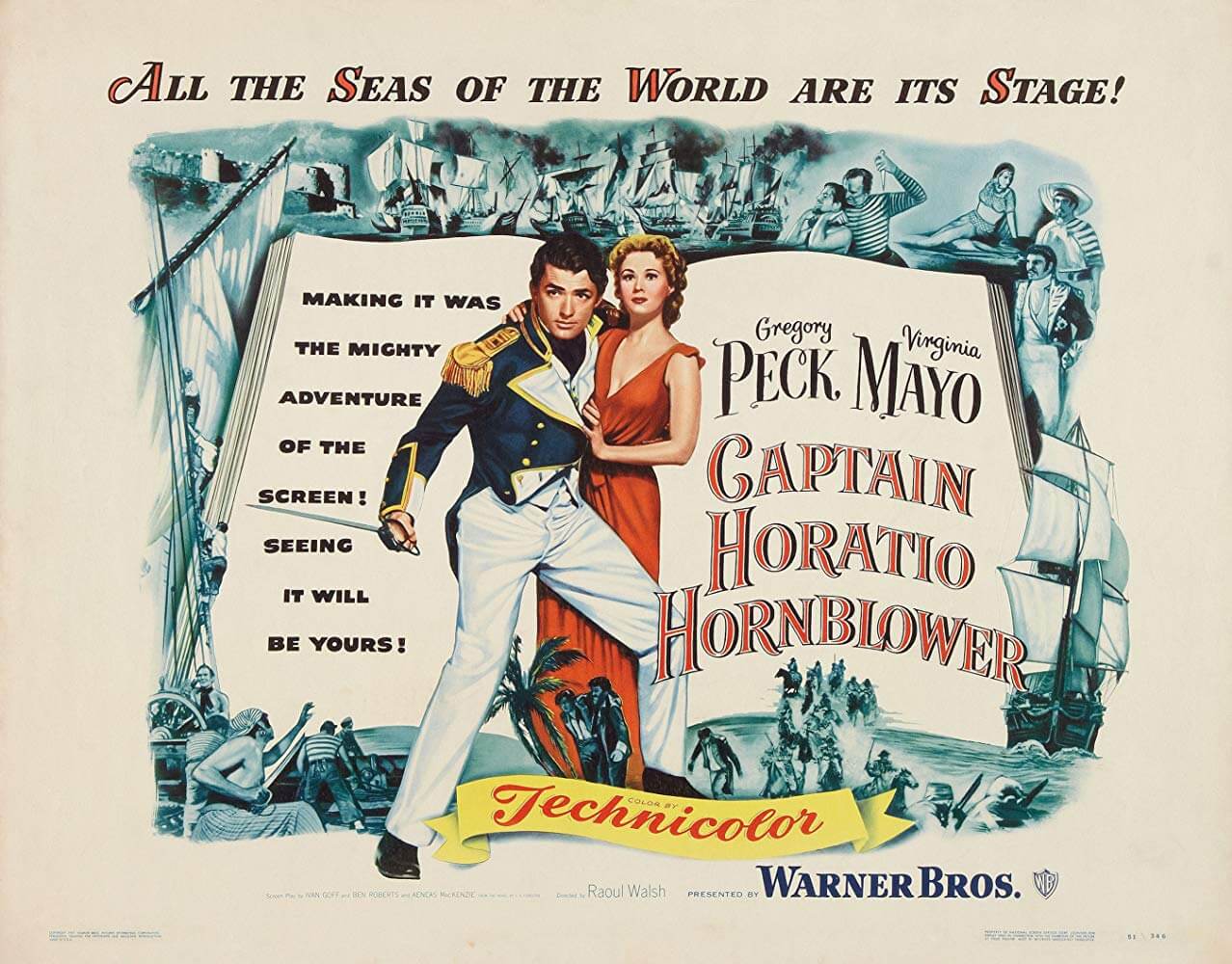 Welcome back to You Should Be Watching, the home of forgotten and underappreciated movies and series. This week, we’re sailing the high seas with Gregory Peck in 1951’s Captain Horatio Hornblower, R.N. The Hornblower character originated from several novels by C. S. Forester published between 1937 and 1967. I haven’t read these stories, but they are highly-regarded, influential, and have been adapted to radio plays, film, and TV series a few times. I’d actually never heard of the character until my husband’s friend from church lent us this movie on DVD.

Captain Horatio Hornblower, R.N. tells the stories contained in The Happy Return, A Ship of the Line, and Flying Colours, and Forester is credited as one of the film’s writers. Throughout the movie, Hornblower contends with the sea, his crew, a Paraguayan dictator who calls himself El Supremo, and, eventually, his own heart. It’s a film chock-full of action, adventure, and intrigue, with some surprises along the way.

It almost goes without saying, but Gregory Peck is superb as Horatio Hornblower. He displays a fantastic range of emotion and is very charismatic in the role. Virginia Mayo also shines as Lady Barbara Wellesley, his eventual love interest and one of the main sources of conflict in the film. Christopher Lee has a small role as a Spanish captain that amounts to little more than a cameo, but this was very early in his acting career and before he was very famous. Alec Mango is effective and rather funny as El Supremo, but honestly, I can imagine some modern viewers being put off by his performance. In fact, the way the Spaniards and the South Americans are portrayed in general would be considered abhorrent by today’s standards, but I appreciate the fact that you can see the film in its unedited form on DVD. In this sense, Warner Bros. is commendable for their transparency with regard to their past, especially in contrast to companies like Disney.  You can see the most offensive of Warner Bros.’ films and cartoons (in which category this film honestly isn’t) unedited on home video, and usually with a disclaimer contextualizing the content therein. Meanwhile, Disney refuses to produce copies of movies like Song of the South and cuts pieces out of Melody Time. One can understand both approaches as solutions to an uncomfortable situation, but I find Warner’s response preferable to simply pretending racism doesn’t and never did exist.

There are lots of things that can make a movie stand out, but for me, it’s usually the characters and their relationships that make or break a film. Hornblower is definitely an interesting character, with a multi-faceted personality and backed by a charismatic presence. He’s courageous and proud when commanding the HMS Lydia, but when first confronted with a beautiful woman onboard, he becomes like a confused child, equally annoyed and entranced by her. He proves to be intelligent, resourceful, and full of unexpected talents. Lady Barbara doesn’t get a whole lot of screentime, but she leaves a distinct impression nonetheless. The rapport the two develop on the Lydia surprised me in its effectiveness; after only a couple of shared scenes, you can feel their chemistry. I’m very particular about romance in movies, and honestly, it’s usually the aspect of most movies that I ignore or roll my eyes at. The romance in Captain Horatio Hornblower, R. N. comprises only a portion of the main story, but it’s extremely well done. It really feels like there’s a relationship there, and this is a rare “will they, won’t they” story that actually makes sense and didn’t annoy me. You’re forced to legitimately wonder whether things will work out for them, and how they could. Their banter feels exceedingly modern despite the film’s age, and even when Mayo isn’t on screen, you feel her presence in Hornblower’s more introspective moments. 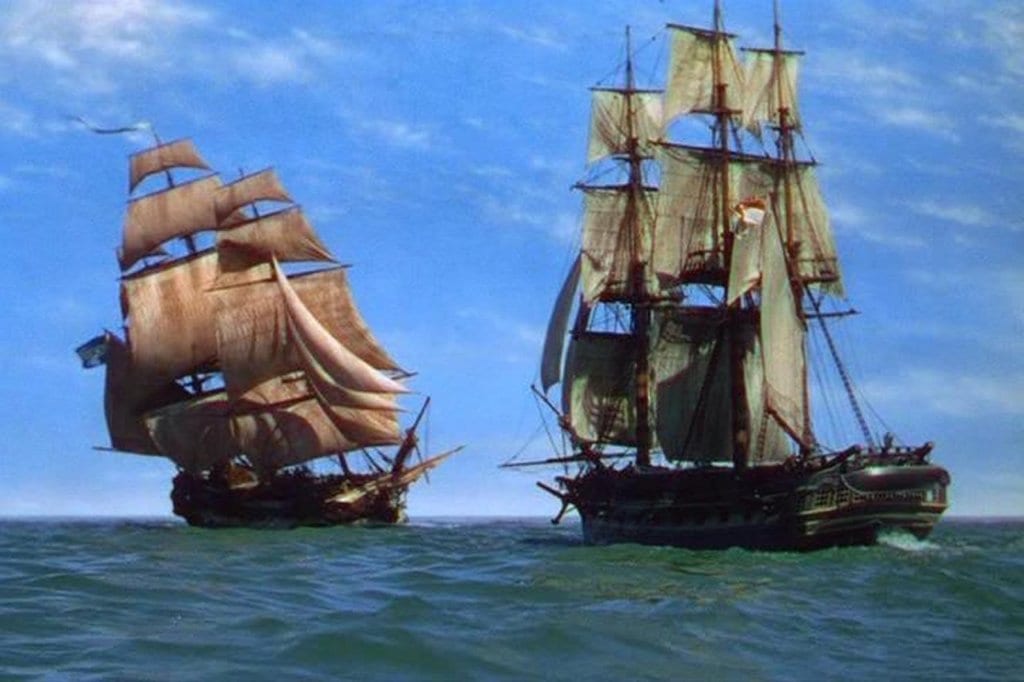 That being said, the film also succeeds at creating exciting battle sequences, such as the Lydia’s second encounter with the Spanish ship Natividad. The way the ship and the ocean are shot is glorious, and there’s also an exhilarating sword fight between Hornblower and Christopher Lee’s Spanish captain earlier on in the movie. The film has its share of heartbreaking moments as well, such as the death of one of the crewmen, and later, when Hornblower reads a letter from his late wife. Captain Horatio Hornblower, R. N. tells an epic story, and much like its protagonist, it has many facets and excels at lots of seemingly contrary feats. The film was marketed at the time as having the world as its stage, and you can see why; the landscapes are gorgeous and varied, as are the bodies of water. Captain Horatio Hornblower, R. N. is a feast for the eyes, as well as for the mind and heartstrings. The movie’s costumes are convincing and beautiful, and the original music by Robert Farnon is lush and always adapting to the setting and tone.

Captain Horatio Hornblower, R. N. is a movie I hadn’t heard of two weeks ago, and I’m very glad that it was brought to my attention. Some aspects of the film feel dated, while others are timeless, but the performances, dialogue, and visuals are always spectacular. It’s a story on the scale of El Cid told with all the technical prowess of Citizen Kane and the aesthetic beauty of Lawrence of Arabia. I’m not sure why time hasn’t been as generous with this film, especially as others like Gone With the Wind contain similar potentially offensive characterizations. I would recommend Captain Horatio Hornblower, R. N. with the caveat that it was made in a different time when different things were prioritized. For any faults in the way Hollywood treated certain people in the past, these films are still worth revisiting, and I appreciate that Warner Bros. recognizes that. The cast, visuals, and musical score are why you should be watching Captain Horatio Hornblower, R. N.

Captain Horatio Hornblower, R. N. isn’t streaming on Netflix or Amazon; however, you can purchase it online for about $15, and it comes with a humorous Looney Tunes Hornblower short, and a short film called My Country ‘Tis of Thee that contains one of the aforementioned disclaimers.