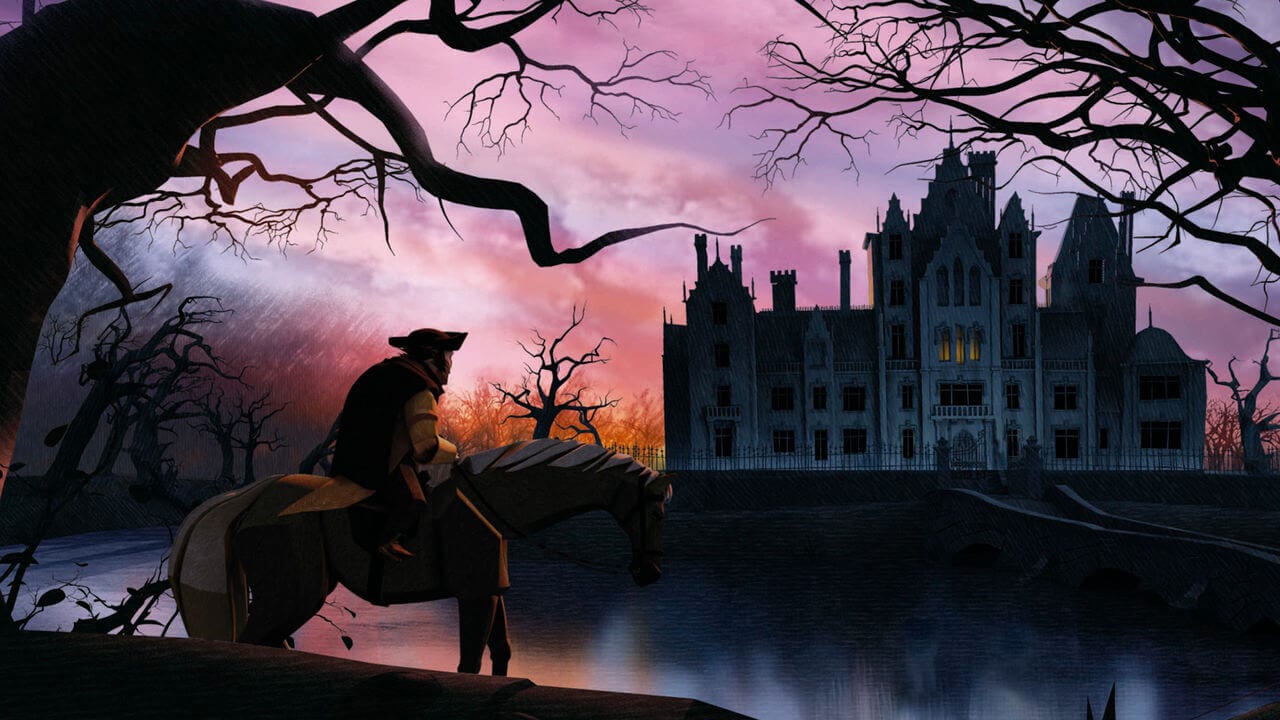 “Sometimes I think the only thing that kept me from you was my beating heart.

Welcome back to You Should Be Watching, where I recommend movies and TV series that deserve more recognition. This week we’re looking at Extraordinary Tales, an internationally produced anthology of Edgar Allan Poe adaptations. The film is written and directed by Raul Garcia and produced by several independent sources, including Bela Lugosi’s son. Extraordinary Tales presents Poe’s iconic stories “The Fall of the House of Usher,” “The Tell-Tale Heart,” “The Facts in the Case of M. Valdemar,”  “The Pit and the Pendulum,” and “The Masque of the Red Death,” as vignettes connected by a frame story in which Death appears to Poe, beckoning him to the beyond. The segments are narrated by Christopher Lee, Bela Lugosi (by way of an old recording), Julian Sands, and Guillermo del Toro. They’re all great choices for the creepy shorts, lending a convincing air of dread to the characters and scenarios. I think it would have been cool to incorporate Vincent Price and Peter Cushing somehow, maybe using old recordings of them too. But I won’t fault the film for something so specific, and I can’t help wondering if the main character in the Valdemar segment was modeled on Price.

“The Tell-Tale Heart” features original music by Javier López de Guereña, and the rest of the vignettes are scored by Sergio de la Puente. The music is hauntingly beautiful and extremely creative, adding another layer of atmosphere to a film already swimming in ghoulish goodness. In addition to having a totally unique sound, the film sports a gorgeous color palette. Each story features a different animation style; “The Fall of the House of Usher” looks three-dimensional and almost like a stop-motion movie, “The Facts in the Case of M. Valdemar” looks like a comic book come to life, and “The Tell-Tale Heart” is bathed in harsh black and white, creating something that is equal parts unsettling and eye-catching. Meanwhile, the discussion between Poe (represented by a speaking crow) and the voice of Death is something completely different from any of these; the characters look almost like they’re made of paper, with color and texture exploding from the screen. It has been a while since I’ve seen an animated film so visually striking, and so unafraid to try unconventional styles and designs. 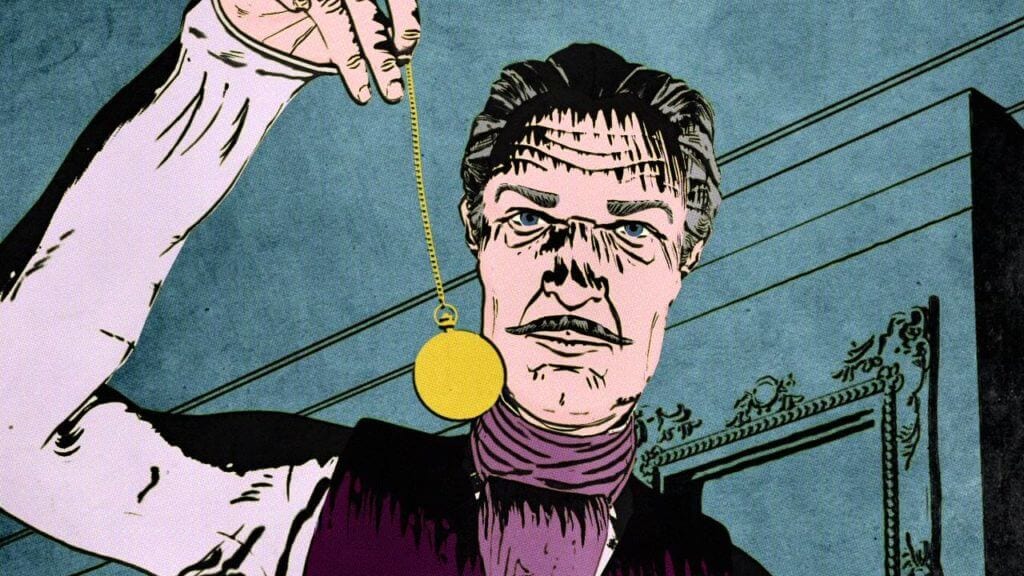 All that being said, the vignettes are somewhat uneven in quality. The aforementioned visuals and music vary but never lull, but the same can’t be said for the stories and characters. “The Fall of the House of Usher” and “The Masque of the Red Death” are the very best segments, and this is likely why they were selected to bookend the film. The middle three vignettes range from mediocre to pretty good; “The Tell-Tale Heart” shines in particular, with Lugosi’s reading over the animation.”The Facts in the Case of M. Valdemar” and “The Pit and the Pendulum” feature fantastic voiceovers and interesting visuals, but I found myself the least “sucked in” to these stories, for some reason.

Extraordinary Tales is also a film that may not play equally well for everyone; there’s pretty much no such thing as a movie that everyone likes, but there are films that have a certain appeal that transcends time and place to attract a wide array of demographics. I’ll save you the suspense: this is not one of those movies. If you don’t care for Poe’s writing, unconventional films, or even just the macabre in general, then this movie probably isn’t for you. However, there have been some criticisms of Extraordinary Tales that strike me as unfair, namely that it’s not suitable for young children. Have you read any of Poe’s work? It is neither appropriate nor accessible for kids and isn’t intended for them. This is something I’ve run into numerous times with animated films and series made for adults; people assume they can show it to their kids and then get upset when it’s not appropriate or entertaining for them. I wonder if this is the same crowd who gets angry with media that actually is intended for children, saying that it has bad role models, too much dialogue, etc. 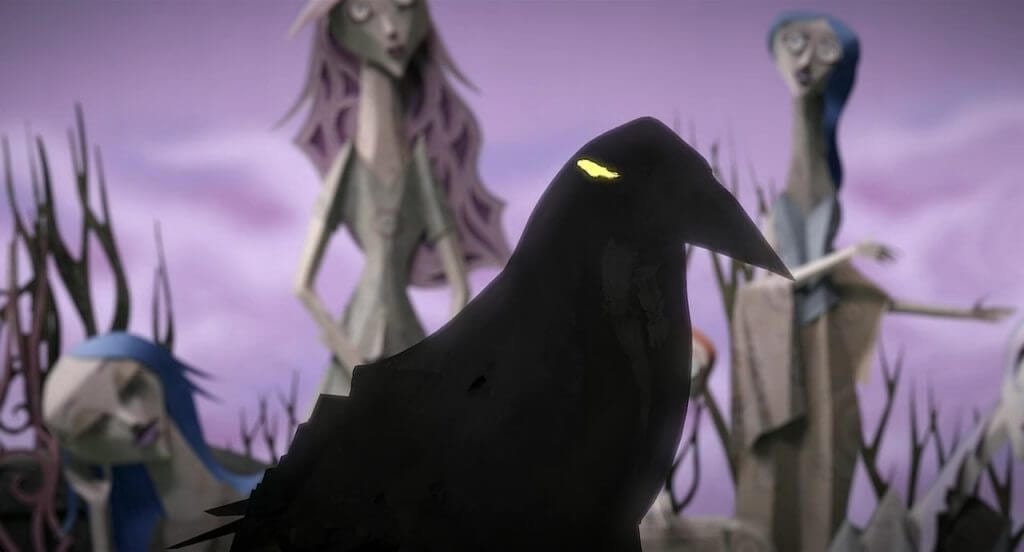 I’ve only just seen Extraordinary Tales this weekend, but I can’t get my mind off it. It reminds me a lot of the old Hammer horror movies, as well as the older Poe adaptations starring the likes of Vincent Price. I think this will prove to be a good one to watch in October, as every element of the film is straight-up spooky. Normally, I judge movies on things like themes and character development, but something like Extraordinary Tales is interesting because, even though those things are present, the anthology-style composition brings other things to the forefront. This film is more of an emotional experience than a logical one; you’re captive as it fills the senses with the morbid. You breathe in a piece like this, rather than guessing what will happen next or judging the choices the characters make. This movie feels like a Halloween special specifically for adults; it made me feel almost the way The Nightmare Before Christmas or It’s the Great Pumpkin, Charlie Brown do. Although the film is less specifically for the holiday and more a celebration of Poe’s work, it has exactly the right mood, look and sound for Halloween.

Extraordinary Tales isn’t a perfect film, but it is a lot of fun. The film brims with interesting sights and sounds and seems crafted with the intent to evoke older scary movies. I’d recommend this to any adults looking for something to watch next month, especially if you’re tired of the inevitable month-long Hocus Pocus and Halloweentown marathons; God, I know I am. Exquisite use of tone and mood, a great cast perfect for the material, and an apparent love of Poe and classic horror make Extraordinary Tales what you should be watching. Extraordinary Tales is available on Netflix, and Amazon Prime also has it, though not for free. I found it incidentally while scrolling through Netflix.