You Should Be Watching: Looney Tunes: Back in Action (2003) 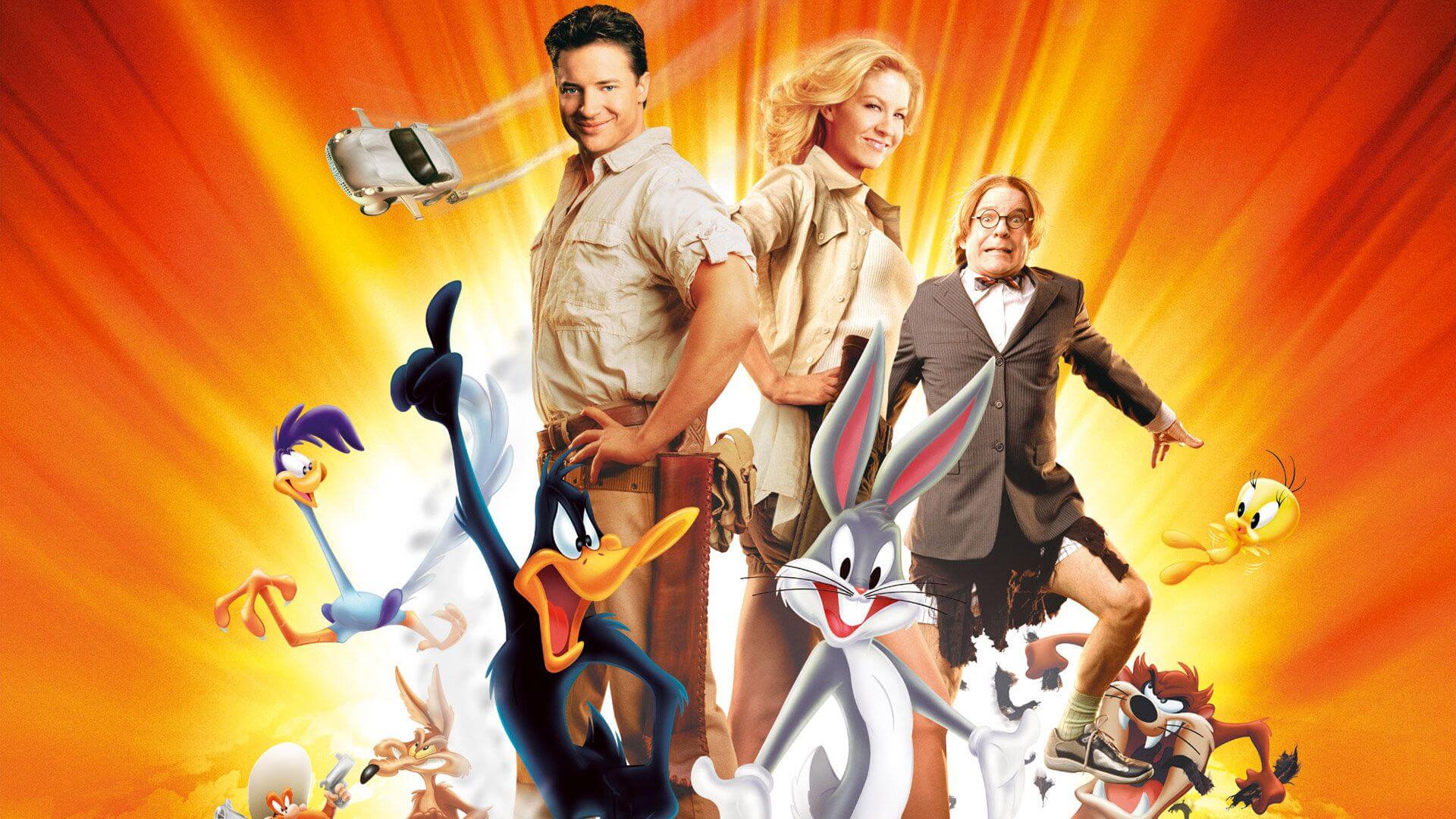 “Gee, it was really nice of Wal-Mart to give us all this free Wal-Mart stuff just for saying ‘Wal-Mart’ so many times.”

Welcome back to You Should Be Watching, where I recommend films and TV series that have been overlooked or forgotten. This week we’re getting a little animated with 2003’s Looney Tunes adventure, Looney Tunes: Back in Action. Much like the more fondly remembered Space Jam, Looney Tunes: Back in Action stars the famous Warner Bros. characters alongside flesh and blood actors. Unlike in Space Jam, however, the main characters are fictional, rather than having the actors portray themselves. There is one exception, though, and I won’t spoil it because it’s hilarious.

The semi-plot of Looney Tunes: Back in Action is initiated by a feud between Daffy Duck and Bugs Bunny, and the eventual choice of the Warner Brothers (actual characters in the movie) to fire Daffy and keep Bugs on the lot. Humorless VP of Comedy Kate Houghton (Jenna Elfman) is complicit in the decision to fire Daffy, so when Bugs convinces the Brothers to hire him back, it’s up to her to track him down and re-hire him. This becomes problematic because Daffy is with DJ Drake (Brendan Fraser), a stunt double and janitor Kate also wrongfully fired. He also happens to be the son of Damian Drake (Timothy Dalton), the studio’s biggest star who is known for playing spies, and who turns out to be a real spy. The two have hit the road in search of DJ’s father and the mysterious Blue Monkey he told them to find. Soon enough, Kate and Bugs decide to trail DJ and Daffy in Damian’s real-life spy car. It’s a race against the clock to save everyone on Earth from being turned into monkeys by the chairman of the Acme Corporation (Steve Martin). Can the frenetic foursome stop him in time and save Damian? 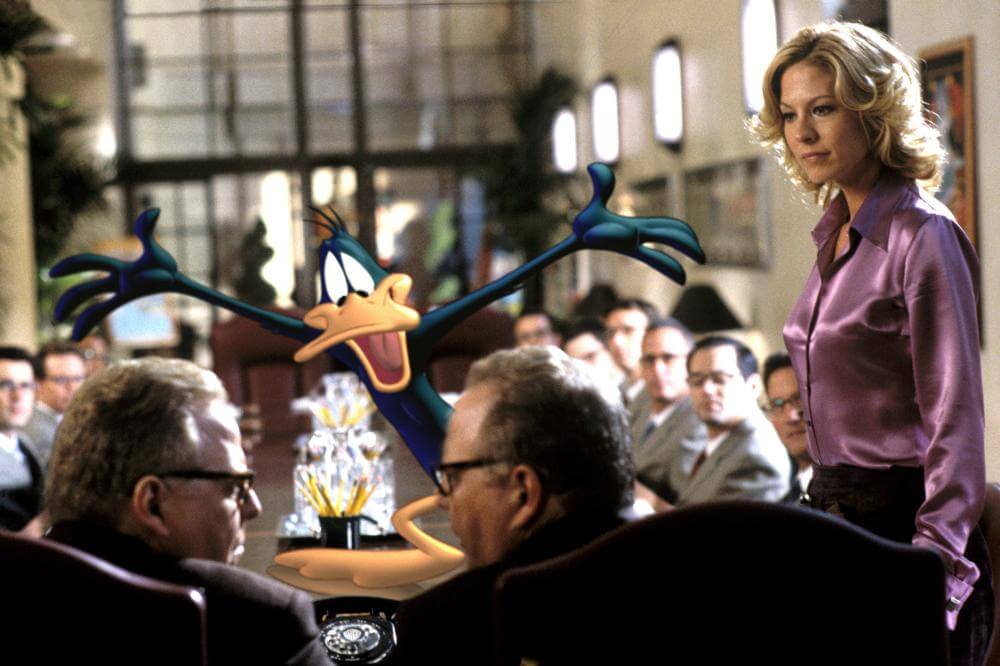 Brendan Fraser is really funny in this movie and pokes fun at himself and his image at the time as a big Hollywood star. I love when actors don’t take themselves too seriously and occasionally goof off like this. His character is also likable, and you can admire that he wants to find success on his own terms, not just as the son of his superstar dad. It’s genuinely sad when he initially gets fired. Jenna Elfman isn’t quite as good, although I blame it more on her character than her performance. She does pretty much what her role calls for, which is to be a stick in the mud. She gets a little better as the movie goes on, but she doesn’t really develop in the traditional sense. At one point in the film, DJ saves Kate’s life, and from then on she mindlessly smiles at him with googly eyes. I have no problem with the two growing closer and becoming a couple, but the writing and her performance don’t make it convincing. I do realize that this is a Looney Tunes movie and that it doesn’t necessarily have to follow the rules of the real world; however, excluding the romance, the human characters mostly react in a normal, human way, while their animated co-stars act more, well, looney. Steve Martin is quirky as the Chairman, and while he’s not laugh-out-loud hilarious, he does get some good lines.

I watched Looney Tunes: Back in Action specifically because of Brendan Fraser and Timothy Dalton, and to be honest, Dalton isn’t in the movie a whole lot. But he is good in it, as he is in everything.  Like Fraser, he also pokes fun at himself and his career throughout the film. I love that he’s famous in the movie for playing a spy and that he turns out to really be one. Although they don’t get to interact very much until the end, his chemistry with Fraser is good. Dalton’s role is indicative of one of the movie’s strengths in general: the comedy and references in this movie are great. And there are a lot of references. There are cameos, fourth-wall breaks and puns constantly being thrown at you throughout the film’s 91-minute runtime, and it is glorious. Aside from cameos, the film also features Heather Locklear and Joan Cusack in small roles. They’re good and funny as well, particularly Cusack.

Aside from Elfman’s arbiter of abrasiveness, I do have one other gripe with the film, and it’s the animation. The animated characters in Space Jam didn’t look great and stood out a little too much from the background, but they still looked a lot better than they do in Looney Tunes: Back in Action. The light doesn’t bounce off of them right and, as a result, it’s too apparent that they’re not really present with their living co-stars. Obviously, the audience will know in the back of their mind that Bugs Bunny isn’t real, but the idea of a film is to suspend the viewer’s disbelief to an extent that they can easily accept what happens on-screen. In an effects-heavy film like this one, the effects have a lot to do with that suspension. So while the animation on the Looney Tunes is by no means the most important thing to me, I do think it’s worth discussing. For reference, Space Jam was seven years before this, Who Framed Roger Rabbit was 15, and Mary Poppins was 39; all of these films featured heavy use of live-action-animation hybrid footage, and they all look better than Looney Tunes: Back in Action.

That being said, the cast, sense of humor and pure insanity in the film more than make up for it. I think Back in Action is well worth watching, or I wouldn’t be recommending it, but I think it’s also important to set up realistic expectations in addressing what I see as flaws. Unlike most of my recommendations, Looney Tunes: Back in Action isn’t what I would call a great film. All this being said, this movie is hilarious. Most of the actors help a lot with the comedy, including a ton of blink-or-you’ll-miss-it cameos. This is a movie where you can just tell how much fun the actors, writers and director Joe Dante were having, and that fun channels over to the audience. If you like the Looney Tunes, slapstick comedy or just want to turn your brain off and have fun for an hour and a half, you should be watching Looney Tunes: Back in Action. I saw Back in Action years ago as a kid but re-discovered it on Netflix last week. Amazon Prime also has it, but not for free.