You Should Be Watching: Monty Python’s Life of Brian (1979) 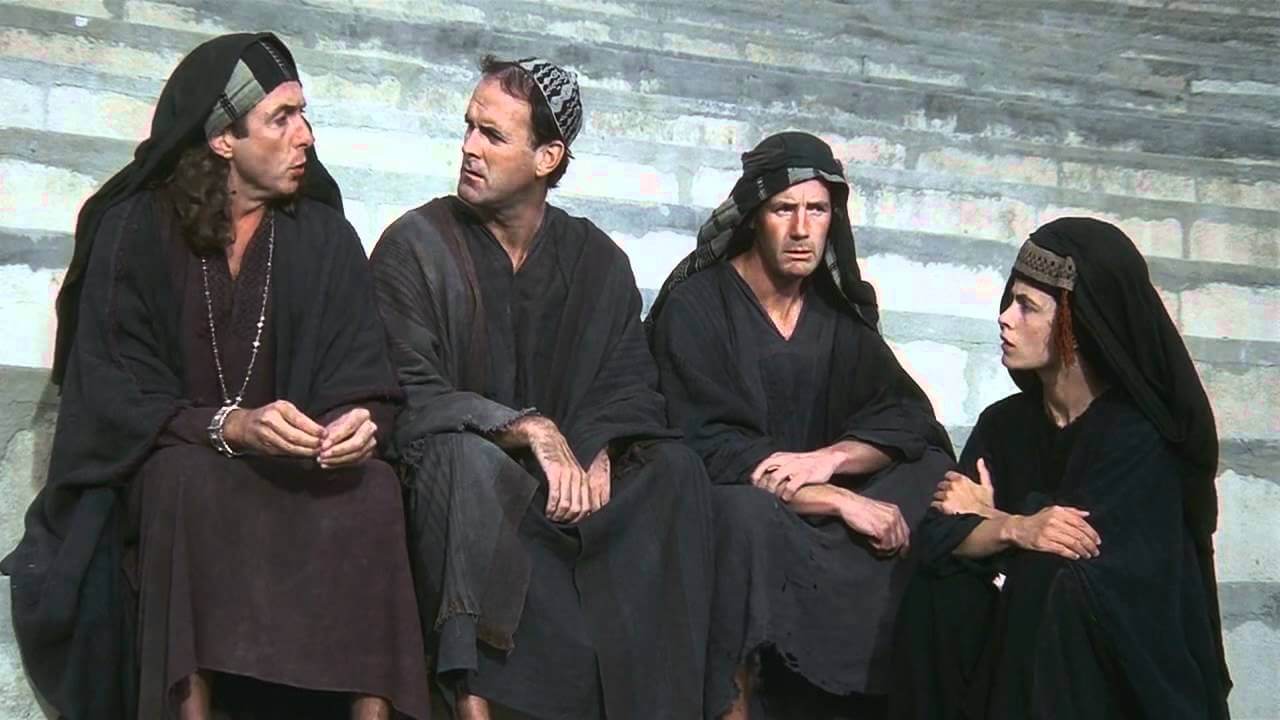 Life of Brian follows a man born on the same night as Jesus, and right next door to boot. The wise men mistakenly follow the Star of David to him, and for the rest of his life, he’s mistaken for the Messiah. Brian finds that if he claims not to be the Messiah, people just think he’s being humble, but if he admits to being the Messiah, they rejoice in the streets; he simply can’t get away from the mistaken label. Along the way, Brian deals with badgering from his mother and joins a political resistance movement. The film calls into question human individuality, groupthink, ideas within the Bible, and even the very concept of a Messiah sent by God to save everyone.

This movie is absolutely hilarious. The dialogue is lightning-quick, and part of the hilarity comes from how outrageous some of the subject matter is. There are a couple of scenes in Life of Brian that they’d never include in a movie today, even as a joke. The first time I saw this movie I was in utter shock during a scene in which they discuss whether men have a right to bear babies, despite their biological inability to do so. By this same virtue, some people might find the jokes and dialogue dated or offensive. Things that were too ridiculous to be taken seriously at the time are now serious political debates, and it’s easy to imagine someone watching Life of Brian and clutching their proverbial pearls. I often hear people say that comedy is subjective, and while I find that statement redundant, it applies here. The type of humor is either going to work for you, or it isn’t; it’s difficult to imagine feeling indifferent about something so outrageous. It goes without saying that this movie won’t be for everyone; there’s a lot of satire and outright criticism of religion in Life of Brian. My husband is a Mormon and loves this movie, so I’m not saying it will offend everyone who believes in Jesus or anything like that. But it could definitely be upsetting if you don’t have a sense of humor about the subject. This also isn’t a good movie to show to children, and in fact, I might recommend just watching it alone for the first time.

Beyond the absurdity of the situations and the boldness of the subject matter, Life of Brian is made funny by the performances of the troupe members, each of whom plays several parts throughout the film. Graham Chapman stars as the eponymous Brian, as well as appearing in a couple of smaller parts. He plays Brian as the everyman, just a guy trying to live his life who gets swept up in this enormous misunderstanding. Terry Jones is hilarious as Brian’s mother, who scolds him constantly. Her perspective on the whole Messiah thing changes depending on what’s convenient at the time. Jones’ woman voice for her is hilarious, and she has several knee-slap-worthy scenes. John Cleese shines in his many roles, but my favorite is Reg, one of the rebellious Jews with whom Brian joins ranks. My favorite of Michael Palin’s characters is Pontius Pilate; he’s featured in a couple of very funny scenes I can’t spoil here. Terry Gilliam and Eric Idle are also great, the latter especially as Stan/Loretta. It almost seems like something that should go without saying, but these guys had amazing comedic timing and played off of each other to gut-busting effect.

The costumes and sets in this movie aren’t Ben-Hur–level, being that Life of Brian is a comedy with a smaller budget,  but they serve well enough and help suck you into this strange world. Terry Gilliam did the production design for the film, and it shows; he would later go on to direct similarly visually engrossing films. The original music for Life of Brian is composed by Geoffrey Burgon, and it’s good, but not so good you have to run out and buy the soundtrack. The opening song, “Brian,” sets the film’s tone well enough, but the real winner here is Eric Idle’s final song, “Always Look on the Bright Side of Life.” The film’s dark sense of humor comes into play here, and it’s glorious.

I mean it when I say that you’ll be laughing out loud at every scene in Life of Brian, but what will bring you back is the ideas lying within the jokes, as well as the story itself. As I mentioned, the film questions the story of Jesus in the Bible, and it also criticizes the way people think and behave where God is involved. Brian’s followers are all just that: followers. They blindly do and say whatever Brian says, and even when he claims not to be their Savior, they insist that he is. None of them think about the situation or question why everyone has chosen Brian as their hero. They’re all like mindless sheep just looking for a shepherd, whether he agrees to lead them or not.

Monty Python’s Life of Brian isn’t for the very young or the very sensitive, but if you like satire and black comedy, this just might be the movie for you. Everything from the performances to the dialogue to the final, absurd musical number serve to create what I consider to be one of the funniest movies ever made. If you have seen The Holy Grail or anything else by the Pythons, you probably already know if you’ll like Life of Brian. The cast, visual humor and witty dialogue are why you should be watching Monty Python’s Life of Brian.

Monty Python’s Life of Brian can be obtained on Blu-Ray or DVD inexpensively on Amazon.