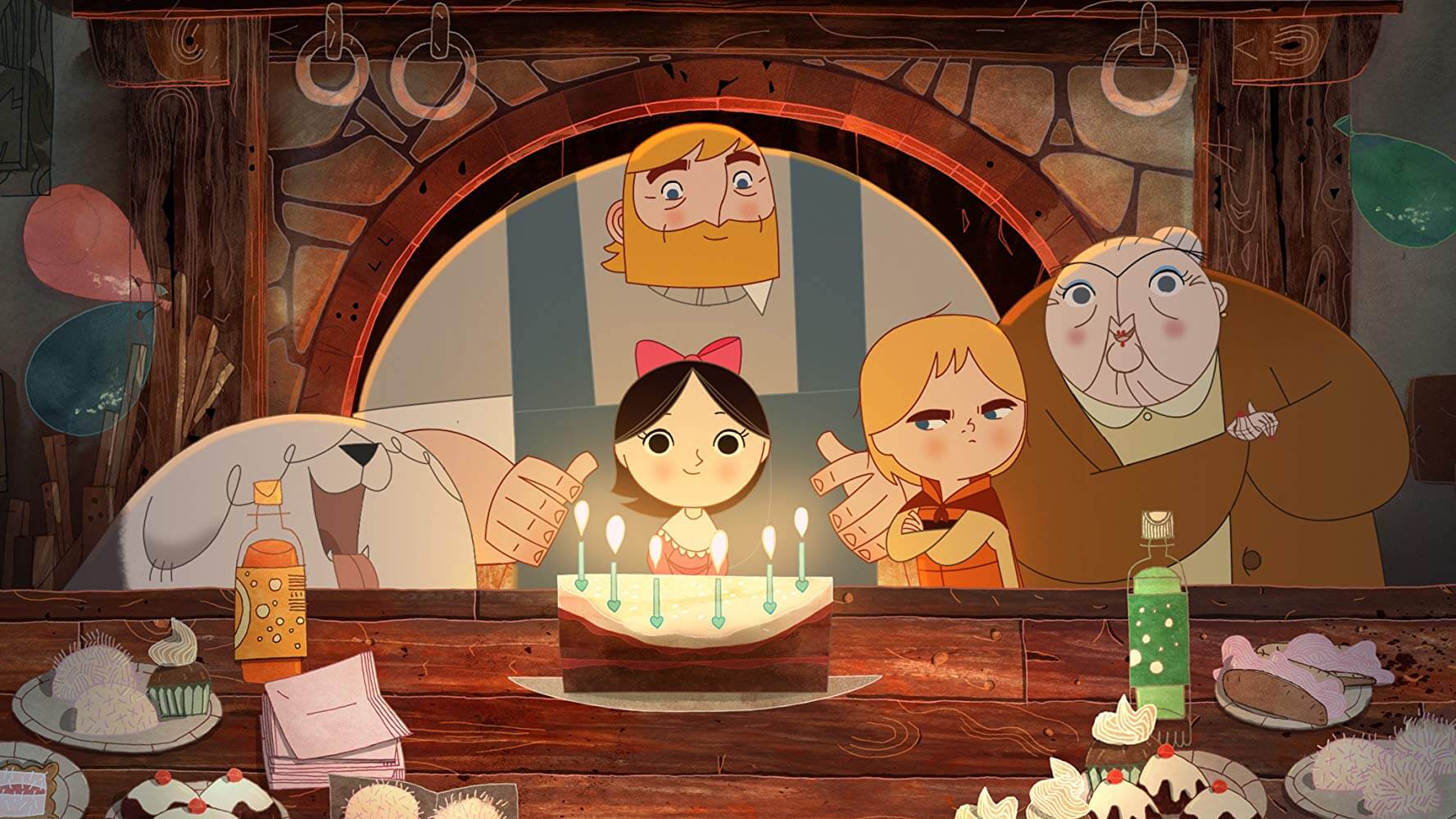 Welcome back to You Should Be Watching, where I shine a spotlight on movies and TV series that need more love. This week we’re going on an adventure through Irish folklore with Tomm Moore’s Song of the Sea. Aside from featuring the mythical characters and lore of his homeland, Moore also based aspects of the film on his own childhood. He is also known for directing The Secret of Kells and a segment of The Prophet, as well as producing The Breadwinner. Song of the Sea opens with a woman named Bronach singing and telling stories to her young son, Ben. She teaches him about fairies, selkies and gods. She gives him a shell that her mother gave her, which can be played as an instrument and from which you can hear the song of the sea. The tender moment is interrupted when Bronach unexpectedly goes into labor and disappears, leaving Ben’s new sister, Saoirse, behind. This experience leaves both Ben and his father Conor scarred and depressed, as well as complicating the relationship between Ben and Saoirse. On Saoirse’s 6th birthday she finds a chest containing a magical object and the key to her destiny, sending her and Ben on a journey to save the world’s magical creatures. With a little luck, they might just manage to save their family along the way.

Years ago I was a member of an online forum for Pixar fans, and I remember hearing about this film, as well as The Secret of Kells, from some of my friends there. For whatever reason, I never looked into either movie until I found Song of the Sea on Netflix this morning. I’ll definitely be looking out for The Secret of Kells because Song of the Sea is excellent, and I can’t recommend it highly enough. This film has a relatively small cast, as most characters outside of the family are just in the background and don’t have names. Brendan Gleeson provides the voice of Conor, and also that of the sea god Mac Lir. He does an excellent job portraying his character’s sadness and confusion, and though he isn’t the lead, it’s easy to empathize with his sorrow. Fionnula Flanagan plays the kids’ grandmother, as well as the goddess Macha. I had previously only seen Flanagan in The Others, but I found her performance in that quite charming. She’s great in Song of the Sea, giving Grandma a domineering veneer; deep down, she just wants what’s best for her son and grandchildren, but contrary to what she believes, she doesn’t always know what the best thing is. Child actors David Rawle and Lucy O’Connell are delightful as the young siblings, and O’Connell, in particular, has a beautiful singing voice. 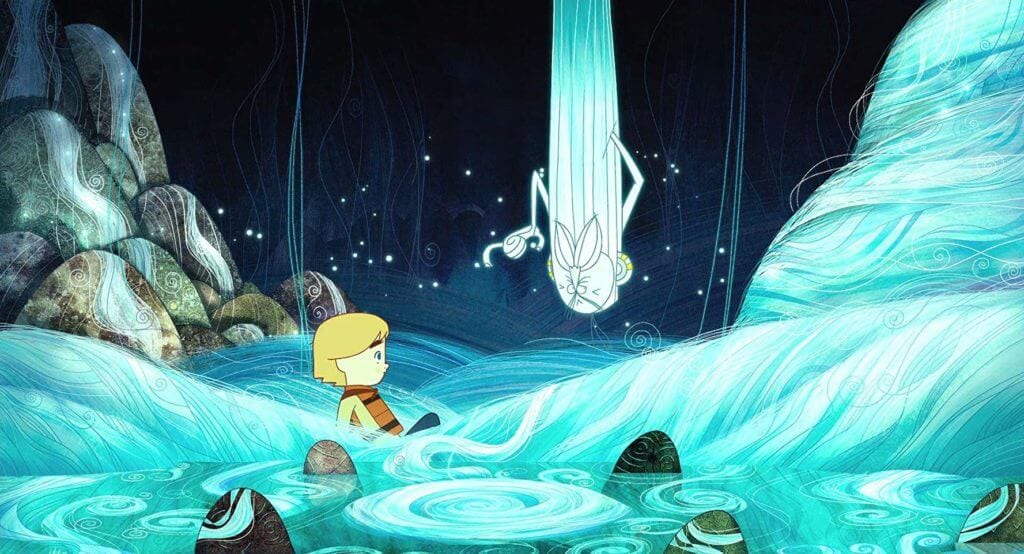 Ben isn’t a very likable character during the bulk of Song of the Sea. Near the beginning, his mother tells him that he’s going to be the best big brother in the world, and anybody who’s seen any movie ever knows this means he probably won’t be. Naturally, once Bronach is gone and he meets his baby sister, Ben blames her for the disappearance of their mother. He proceeds to treat Saoirse with disdain, at times putting her on a leash like an animal. Of course, their father comes to her defense when he’s not too distracted by his own grief. Ben doesn’t come to see how much he cares for his sister until she’s in danger; he then becomes her protector. There’s a lot to absorb in this movie, but I think Ben’s character development is one of the best-executed aspects. Although it’s more subtle, Conor and Grandma learn something in the film too. It’s no coincidence that their actors also portray the sea god Mac Lir and his mother Macha; Mac Lir becomes overcome with his own sadness, and rather than watch her son suffer on end, Macha resorts to unspeakable actions. The deities are a direct analogy to their voice actor’s mortal characters; Conor similarly mopes and visits bars to drink his pain away. His mother, like Macha, shuts him down, encouraging him to keep it all inside. She also thinks she knows what is best for her family, and again like Macha, regularly makes decisions for them instead of with them. The Great Seanachai also shares a voice actor with Dan the ferryman in Jon Kenny. This is interesting, as both serve as helpers and guides, albeit in wildly different ways. There’s also some symbolism in the names of Bronach and Saoirse. I thought Bronach sounded an awful lot like Brona, a character on Penny Dreadful who says her name is Gaelic for sadness. I looked it up to confirm, and Brona is considered a phonetic version of Bronach, both meaning sorrow. Saoirse, meanwhile, means freedom; Bronach brings sadness upon her family by leaving them forever, but Saoirse eventually frees them from their sorrows.

I love movies that explore the mythology of a given culture or place. It’s particularly interesting when it’s one I don’t know much about, and suffice it to say, all I previously knew about Celtic lore I learned from Disney’s Gargoyles; I know, very academic. I love the concepts and designs behind the fantastical creatures featured in this movie. In the end, I wanted to know more about Selkies and the Irish iteration of fairies, and that’s a success in my book. Song of the Sea introduces these concepts and explains them enough to be understood, but it’s not patronizing and never overstays its welcome. 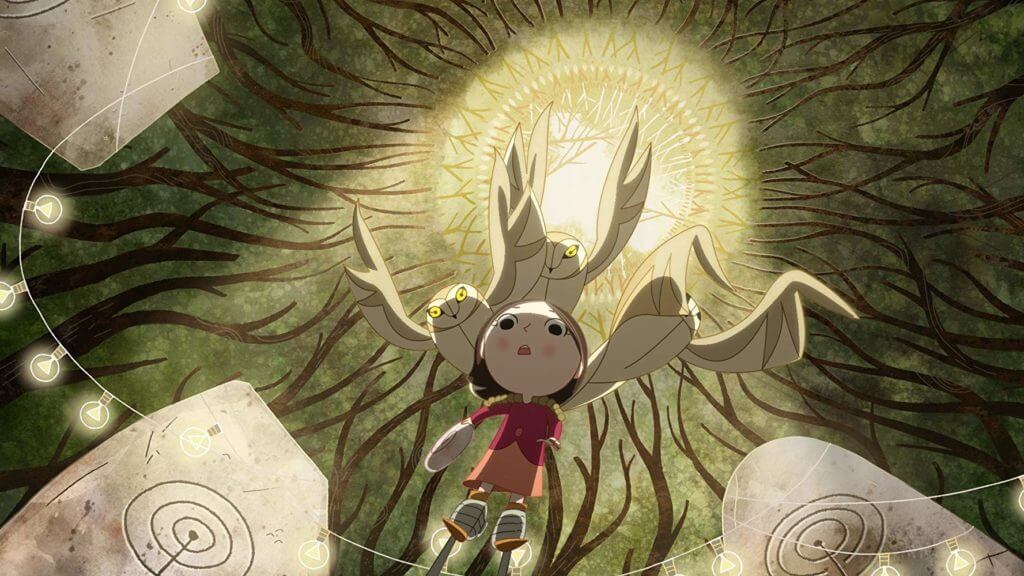 Song of the Sea has an art style that can be described as lovely, charming and soothing. The designs of the human characters are quite simple, to the extent that a small child could have conceived them, but it works so well with the tone of the movie. The backgrounds and mythical creatures also stand in contrast to this simple aesthetic; plants, buildings, even cars are represented in splendid detail. The designs of the gods and the Great Seanachai, in particular, really grab your attention and add a richness to this world they inhabit. The designs are lovely, interesting and unlike anything else I’ve seen in film. The music in this movie is also lovely and haunting; I’ve been finding myself humming the song Bronach teaches Been all day. Much like the film’s visual palette, the score and songs are unlike anything I’ve previously encountered. This movie is wildly different from any American animated films I know of, and for that and many other reasons, I wish it was more convenient to find and see a wide variety of foreign films.

Overall, Song of the Sea is a delight, and I only wish I had seen it sooner. It’s a rare movie I can sit back and enjoy without various nitpicks and annoyances distracting me. I wish Disney’s The Nutcracker and the Four Realms had been more like this, establishing empathetic and complex characters while introducing a mythology that ties into the story. The music, animation, and voicework in this film are an absolute treat I’d recommend to anybody. The fascinating world-building, mesmerizing visuals and music, and understated performances are why you should be watching Song of the Sea.