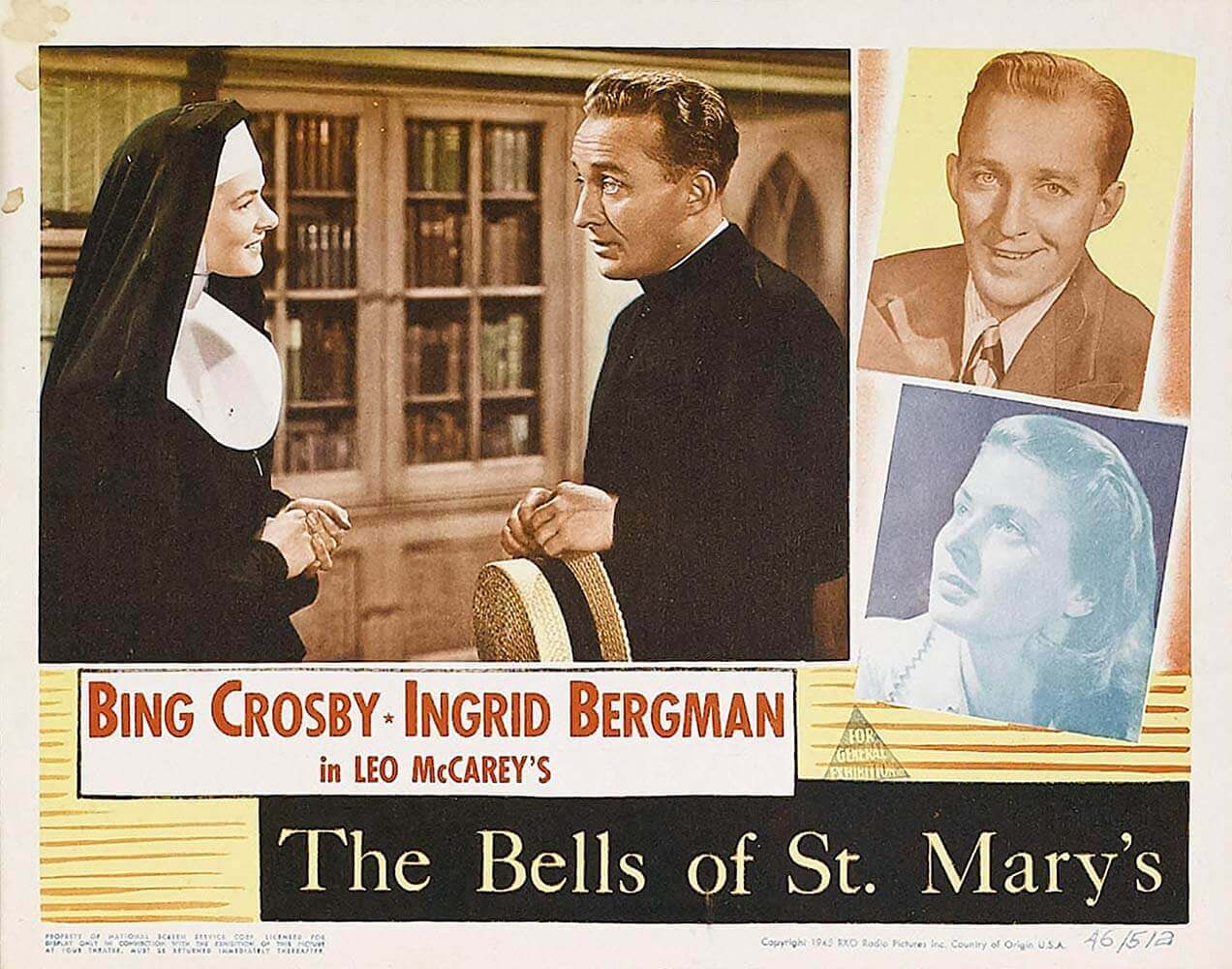 Welcome back to You Should Be Watching, where I recommend films and series that don’t get the attention they deserve. Sometimes this can include movies that were big successes at the time but have been lost to newer generations. In keeping with our Christmas-only theme, this week we’ll be saving a Catholic school with Bing Crosby in The Bells of St. Mary’s. It’s a sequel to Going My Way, in which Crosby portrayed the same character of Father O’Malley, and which won a whopping seven Oscars. The Bells of St. Mary’s isn’t a through-and-through Christmas movie like, say, Arthur Christmas, but a decent chunk of it happens during and around Christmas, and many people have come to consider it a film for the holidays. It’s also a very uplifting film, despite some serious plot points, and has themes of faith, forgiveness and charity.

The Bells of St. Mary’s follows Father O’Malley to St. Mary’s Catholic School, a parochial school in danger of being shut down. There, he bumps heads with Sister Mary Benedict (Ingrid Bergman) over methods of education, discipline and everything in between. A girl named Patsy is dropped off at the school by her mother, who fears she’s having a bad influence on the girl since her separation from Patsy’s father. O’Malley takes her under his wing, but he and Sister Mary Benedict disagree on how to help Patsy as well. In addition to the school itself, O’Malley helps (and arguably saves) Patsy and even Sister Mary Benedict, who receives some bad news from her doctor.

Bing Crosby is excellent in The Bells of St. Mary’s; Father O’Malley is an unconventional priest, but one with a good heart and a way with people. He’s very charismatic, and, of course, they don’t waste the opportunity to have him sing throughout the movie. Ingrid Bergman is possibly even better as Sister Mary Benedict, as her character is more conflicted and deals with more emotional turmoil. The two are particularly good together; their good-natured arguments are among the film’s highlights. Henry Travers, best known as Clarence in It’s a Wonderful Life, portrays stingy businessman Horace P. Bogardus. You can probably guess what happens there, but he’s good in the role nonetheless. Joan Carroll plays the young Patsy, and she’s absolutely fabulous in the part.

The film’s soundtrack is comprised of original songs as well as pre-existing ones. They all sound great, but my favorite is, fittingly enough, “The Bells of St. Mary’s,” sung by Bing Crosby and a choir of the school’s nuns. The costumes probably aren’t anything you’d notice, but I think that’s commendable in its own right; in a movie like this, there’s no need for flashy costumes. They would distract and make the story less believable. This is a much more restrained film than the usual Hollywood musicals of the time. The Bells of St. Mary’s is black and white, but there is a colored version available; I don’t understand the appeal of colorizing black and white films after the fact.

The bits with Patsy and Father O’Malley are among my favorites; he succeeds at explaining things in a way the girl finds more accessible than the Sister’s lessons. It’s also easy to feel bad for Patsy after the way she’s introduced into the story. Many of the scenes with Father O’Malley and Patsy or Father O’Malley with Sister Mary Benedict shine because they exemplify the film’s themes; he’s always gentle and forgiving with Patsy, who he knows must be having a hard time. This ultimately works out very well, getting her excited about her schoolwork and to a place where she can weather major changes in her life. However, there’s one decision I think is ultimately wrong in the handling of Patsy, and I think you’ll know what it is when you see the film. I’ll just say that, in the end, O’Malley may push Sister Mary Benedict to be a little *too* lenient with the girl.

While O’Malley and Mary Benedict disagree on many topics throughout the film, neither is really wrong, per se, and both only want what’s best for the school and their students. Likewise, the film has no villain; just those who need a helping hand and a little faith.  I’ve mentioned a few times that a good Christmas movie must have a feeling of hope and that people are ultimately good, and that’s certainly present in The Bells of St. Mary’s. There’s also a theme of redemption and forgiveness surrounding Patsy and her family in particular. At St. Mary’s, she receives a second chance at childhood and learning, and in the end, it’s her turn to give her parents a second chance. The larger story can also be seen as a chance for the school’s redemption.

All this being said, this is a fun movie too. One of the funnier moments in the story comes when Sister Mary Benedict seeks to teach one of the boys, Tommy, how to fight so he can defend himself from bullies. She has him practice on her, and one of his jabs lands squarely on her jaw. Another lighthearted moment is when the youngest children are trying to put the Christmas pageant together and chaos ensues. And even some of the more dire plot threads find happy endings for the characters, usually with the help of Father O’Malley.

It’s hard to say why interest in The Bells of St. Mary’s has waned as the years have passed. After all, many other Christmas classics like It’s a Wonderful Life and Miracle on 34th Street are in black and white, so that can’t be fairly blamed. I wonder if the setting isn’t secular enough for some, or if the premise just isn’t fantastical enough to grab their attention. Regardless, I’d recommend The Bells of St. Mary’s to anyone of any age.

The Bells of St. Mary’s is a wonderful movie, and perfect for the Christmas season. The characters are likable and, at times, funny, the dialogue is good, and the music is lovely. The cast is excellent, and this is another movie the whole family can enjoy together. Standout performance from Bing Crosby and Ingrid Bergman, an engaging small-scale story, and a dose of Yuletide joy are why you should be watching The Bells of St. Mary’s.