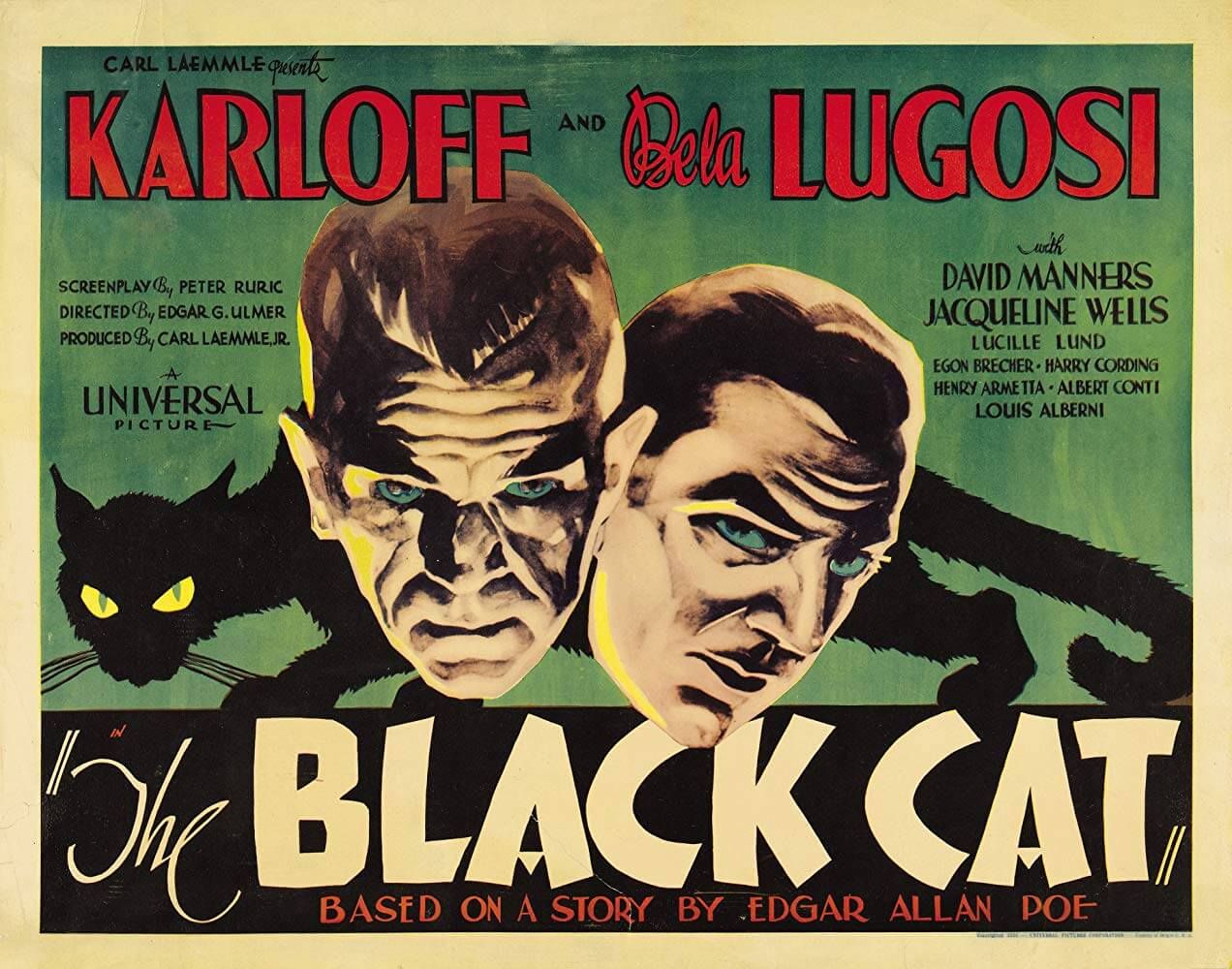 Welcome back to You Should Be Watching, where I recommend forgotten or underappreciated movies and TV shows that deserve to be kept alive. In keeping with my Halloween theme for the month of October, this week we’ll be trapped in a creepy house with horror movie legends Bela Lugosi and Boris Karloff in the classic Universal horror film from 1934 The Black Cat. Marketed as being based on an Edgar Allen Poe story of the same name, The Black Cat‘s plot actually doesn’t resemble Poe’s work; it was later admitted that this was done simply to enhance the film’s marketing. The Black Cat was the first movie to star Lugosi and Karloff together and was a huge success at the time, but I only heard of it when a friend wrote a glowing review. The Black Cat was also one of the first movies to have an ongoing musical score throughout, rather than just during the credits.

The Black Cat stars Boris Karloff as Hjalmar Poelzig, a mysterious man in a big, eerie house. Bela Lugosi portrays Dr. Vitus Werdegast, his rival who arrives in Hungary with honeymooning American couple Peter and Joan Allison (David Manners and Julie Bishop). The three travelers take refuge in Poelzig’s home after an accident with the bus on which they’re traveling leaves Joan injured. The history and intentions of the two men eventually become clear, and the Allisons soon come to realize that their refuge is more than a creepy house and they’re in real danger. The rest of the movie is a big game of finding out who they can trust and escaping in one piece. 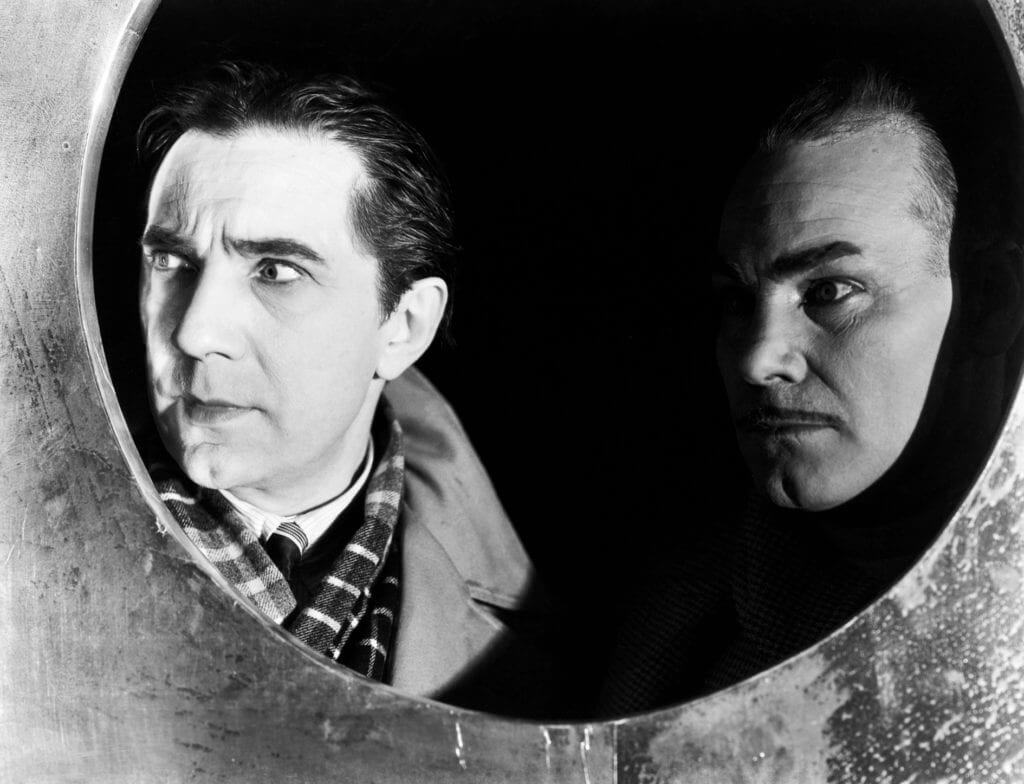 It goes without saying that Lugosi and Karloff are amazing in the film. They each have an undeniable on-screen presence that alone makes any movie in which they appear worth the watch. Their scenes together are enthralling and really suck the viewer in. The first time I saw The Black Cat, I was absolutely glued to the screen trying to figure out what was going on and who was the real bad guy. Manners and Bishop are good here too, particularly the former. Their characters are pretty straightforward; they’re a newlywed couple on vacation, so of course, they’re in love. They’re also pretty naïve, especially with regards to Poelzig and Werdegast, and they’re the audience’s emotional buy-in to the story. Lucille Lund plays Werdegast’s daughter Karen, though she doesn’t do or say much. Everybody does a good enough job in their parts, but it’s obvious that Karloff and Lugosi are the film’s big draws, and even more so whenever they’re together.

There’s a bit of a misdirect with regards to who the villain is in The Black Cat; at the beginning of the movie, it really feels like either or both of these mysterious men could have ill intentions for the young couple. Werdegast and Poelzig are both pretty interesting characters in their own right too; the first World War has had a different effect on each of them, and their idiosyncrasies are unique and fascinating. Werdegast’s fear of cats leads to my least favorite scene; he sees a black cat in the house and kills it. Poelzig also has some tendencies that are less than desirable. These quirks make the men complicated and interesting, if not righteous. Their respective relationships with women determine the fate of the Allisons and, eventually, themselves.

This film is special in that it was one of the first movies to have a musical score throughout. The music, by composer Heinz Roemheld, is very effective, providing creepy ambiance at times and an inviting warmth at others. The costumes in The Black Cat are interesting; Poelzig’s clothing stands out in particular, and the all-black robe gives a hint of his strangeness. There’s an unsettling look and feel within Poelzig’s house that’s so different from what came before that you can physically feel that something bad is going to happen there. The whole look of the house is quite well put together; it’s beautiful, but in a haunting, foreboding way. I love that the house isn’t evil or haunted in the traditional sense; the evil that takes place within is created solely by humans, and that’s much more disturbing in a way. 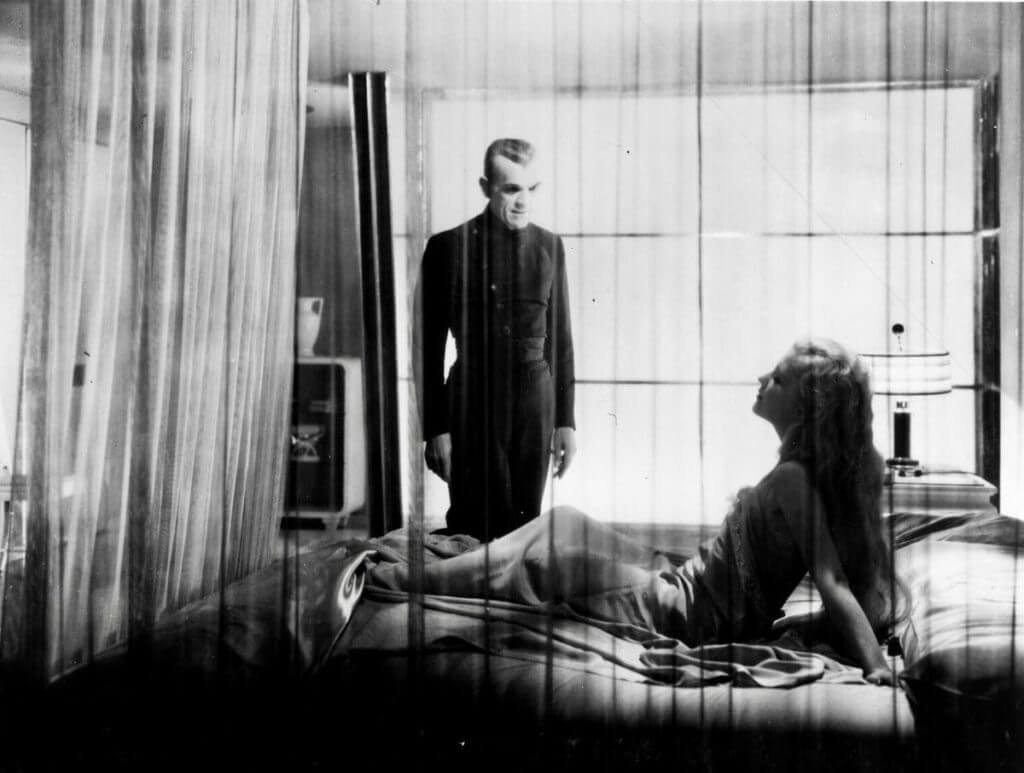 I can’t help wondering if The Black Cat isn’t as well remembered as some of its brethren in the genre because it’s not based on a classic horror story like most of the other Universal horror films from that era, like Dracula and Frankenstein, were. After all, it’s got two of the biggest horror actors of the time together and it’s got just the right atmosphere for the genre. The Black Cat is a perfect movie to watch on or just before Halloween, and it runs a breezy 65 minutes, but it feels complete and you never get the sense that the story or characters are rushed.

In short, The Black Cat is a fantastic, spooky story populated with interesting characters and atmosphere you can cut with a knife. It’s my favorite Universal horror movie from the period and a great pick for a cool October night. Two of the most iconic actors ever, a building, creepy ambiance, and an intriguing horror story are why you should be watching The Black Cat. I first heart of The Black Cat in 2017 when I read a friend’s review. You can purchase the DVD for about $12 on Amazon.