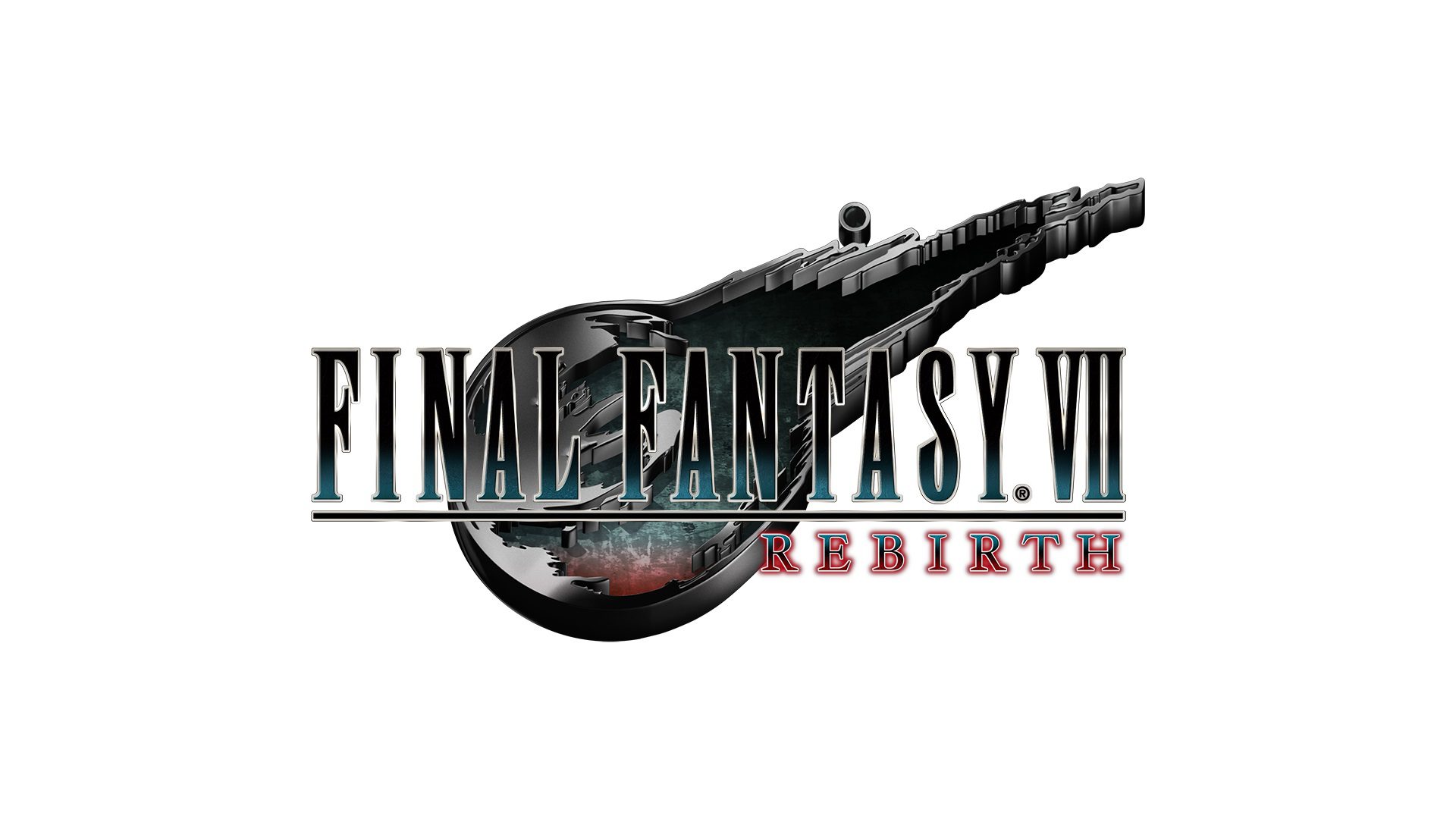 As part of the Final Fantasy VII 25th Anniversary stream hosted by Square Enix, the hotly anticipated 2nd part of the VII Remake was shown, with a cinematic trailer and release window of winter 2023. But that’s not all; a full remake of the PSP Final Fantasy VII prequel, Crisis Core, was also revealed. Let’s dig into that first.

The trailer to Crisis Core – Final Fantasy VII – Reunion doesn’t show any substantial differences from the PSP original. The differences are obviously more on the visual, audio, and gameplay side of things rather than story and sequencing. For example, the main character, Zack Fair, has a different voice actor in the remake. Likewise, expect a remastered arranged soundtrack of the original Crisis Core (hopefully with an option to listen to the original OST). Though I wouldn’t be surprised one bit if there’s a bait and switch regarding story changes, considering the development is by the core VII Remake folks.

What’s really exciting to me is the revamped battle system and engine. You’ll notice the UI is straight from Final Fantasy VII Remake, except without teammate actions since Crisis Core was mostly a solo affair controlling just Zack. The infamous DMW spin system is back, making an appearance in the trailer, though SP seems to be replaced by AP, as seen in the lower left of the trailer. 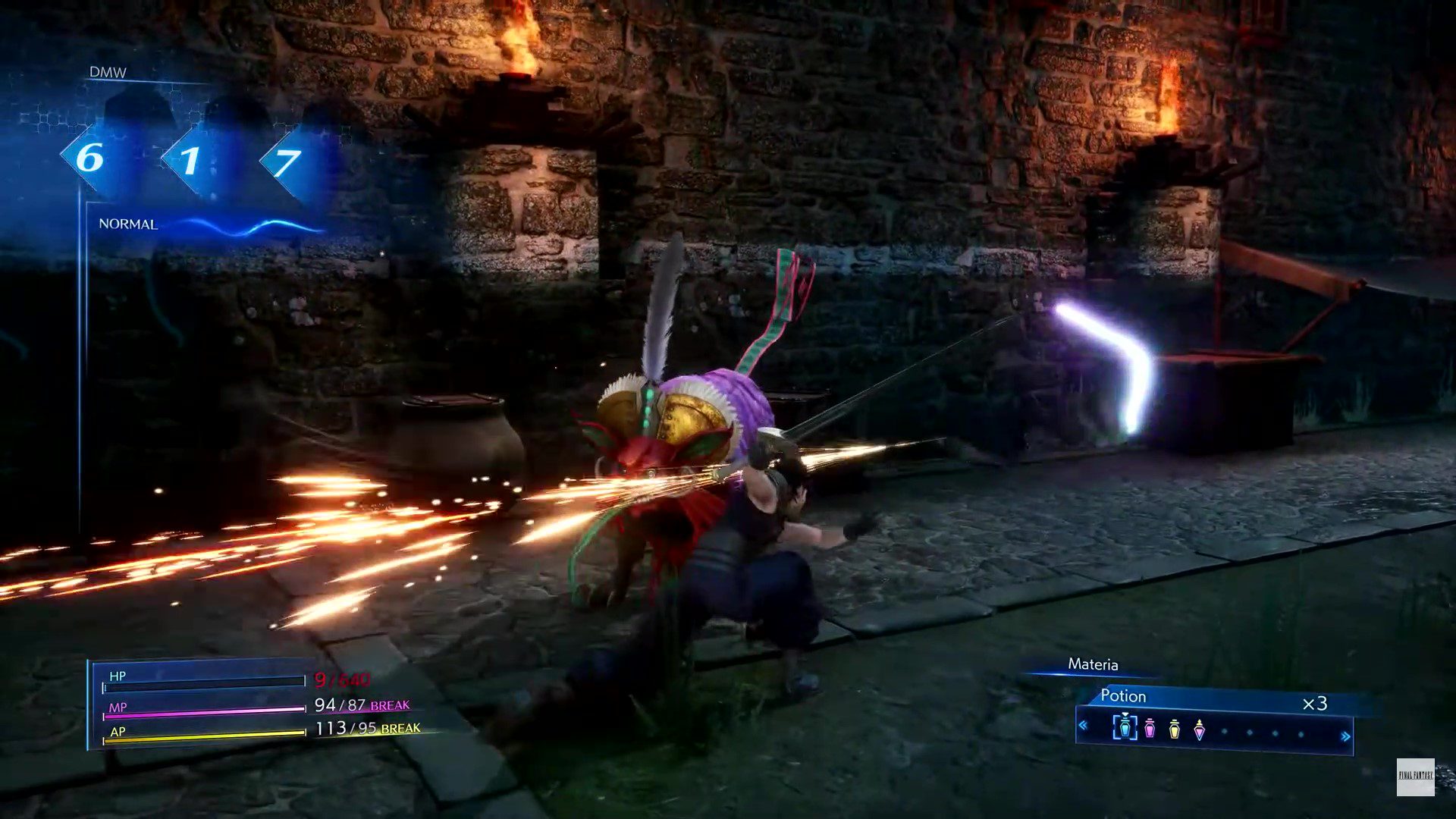 And since this is Crisis Core we’re talking about, the combat will no doubt be a smoother and faster-paced affair than Final Fantasy VII Remake’s Action Turn system, which was a compromise of turn-based and action. The engine for Crisis Core Remake will be the same one used for the core Final Fantasy VII Remake parts, so fans of Crisis Core have a lot of HD Genesis Rhapsodos to look forward to, in addition to better-looking battles and animations. 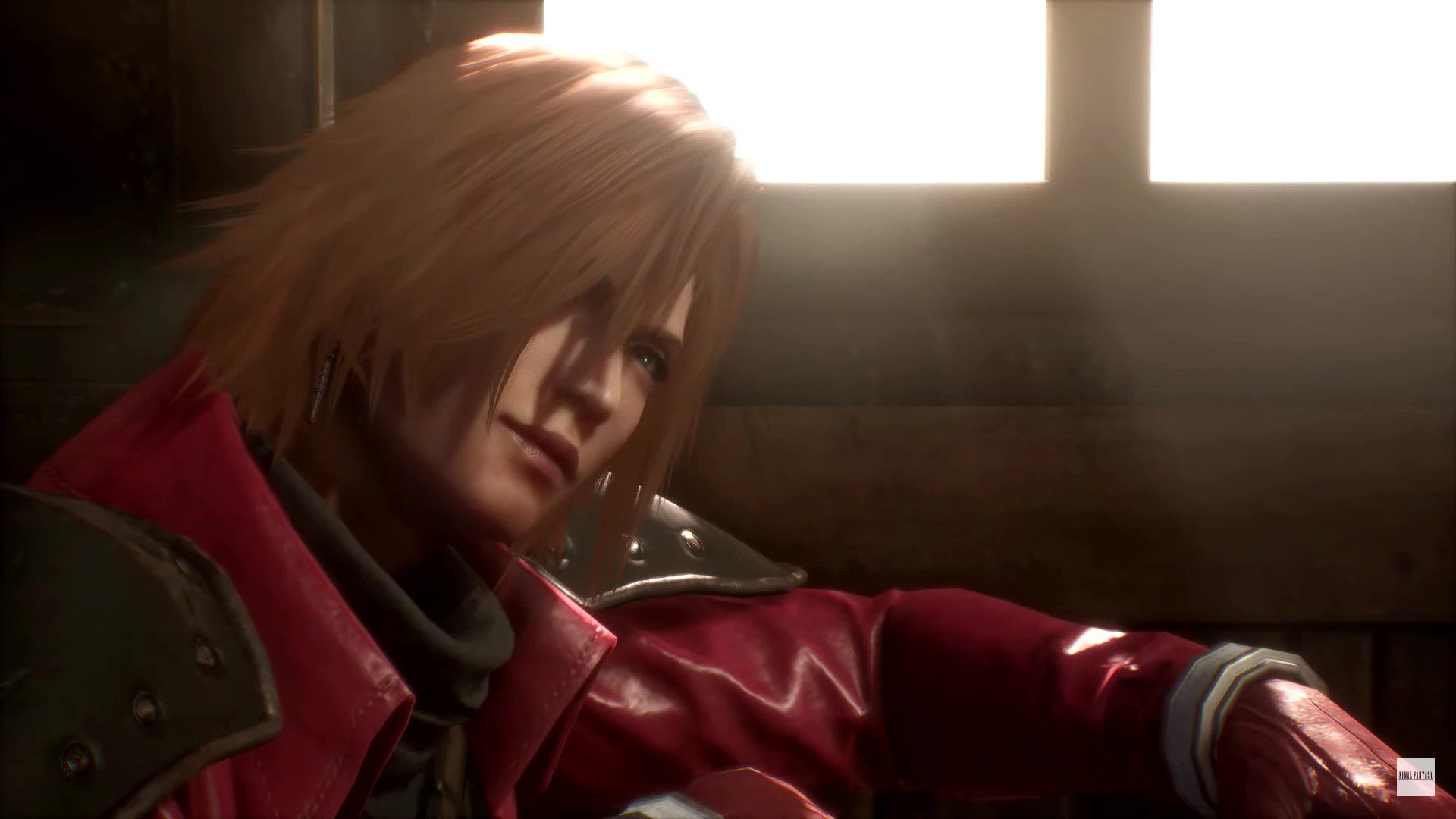 Yep, they didn’t end up calling it Remake Part 2 after all; the sequel to the first remake installment gets its own unique title. Rebirth is not just another stylish Square Enix title either; it has significance to the story and themes of the overall Remake trilogy. Trilogy? Yes, it was confirmed during the 25th anniversary that VII Remake will be a total of 3 parts. I highly suspect the final part will be titled Reunion, even if the Crisis Core remake already has that moniker. (How can it not?).

No gameplay was shown during the short cinematic teaser trailer, and the dialogue was your typical Tetsuya Nomura vague stuff that we Kingdom Hearts fans are used to. I admit I was excited seeing Cloud and Sephiroth walking towards Mount Nibelheim amidst the lush woodland, all being rendered by next-gen hardware. What Final Fantasy VII fan doesn’t want to see what the areas outside Midgar look like with current-gen hardware?

Also, don’t expect this to be open world; it’s far more likely to be wide-linear with somewhat large zones separated by loading screens like Final Fantasy XII. I could be wrong, though. I’m not going to go into the dialogue spoken by Jessie, Cloud, and Aerith in the trailer, but expect this second part to deviate quite a lot from the original Final Fantasy VII. Due to spoilers from VII Remake part 1, I won’t go into the whole rebirth theme this game is clearly going with, but yes, events from the original will be different in this title, even more than the differences that were present in part 1.

I could talk more about theories and speculation regarding the direction the story is headed, but I’ll shut up and let the developers do the rest of the talking. The following statements were released during the 25th-anniversary event by Final Fantasy VII Rebirth’s dev team. 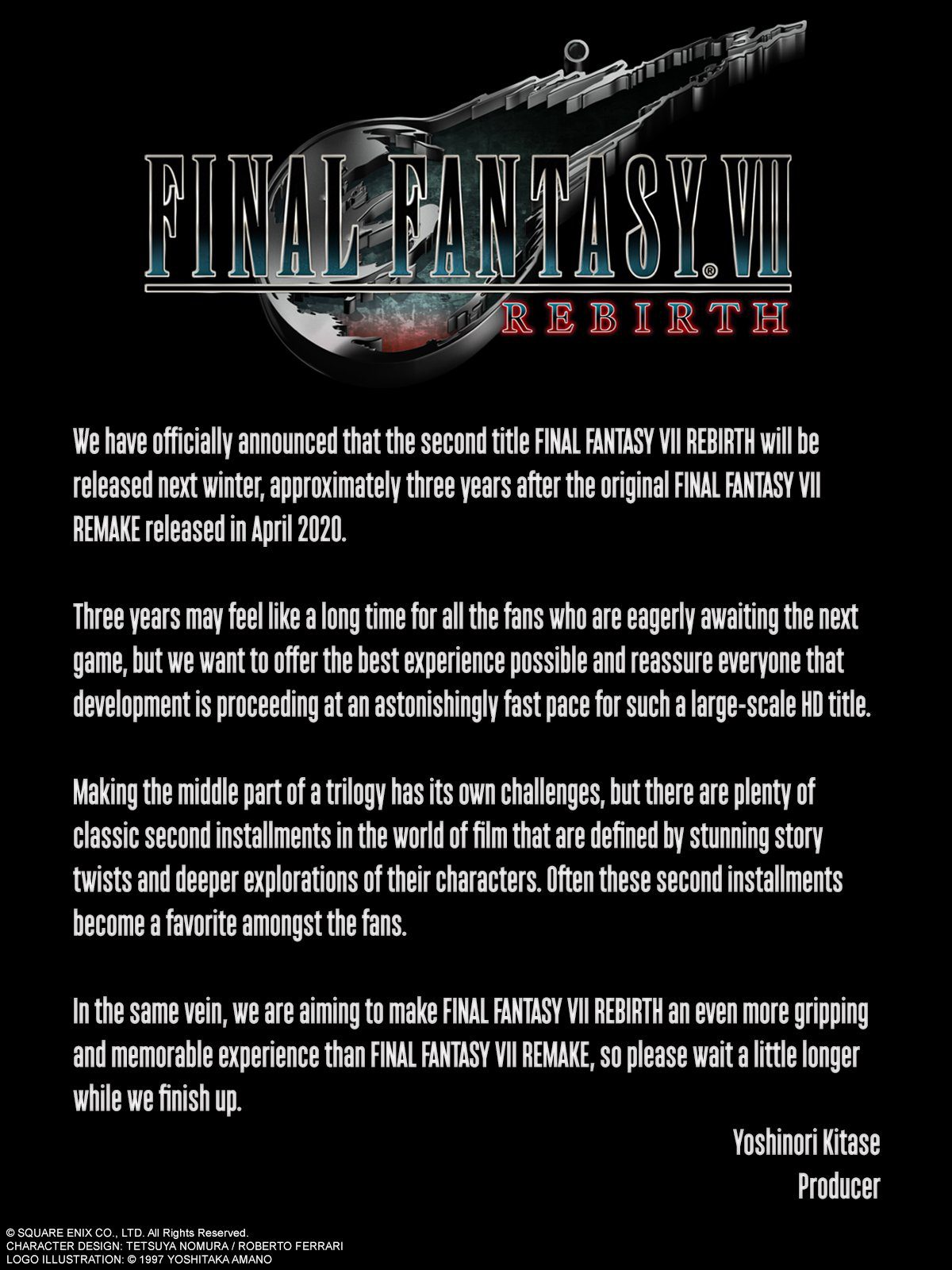 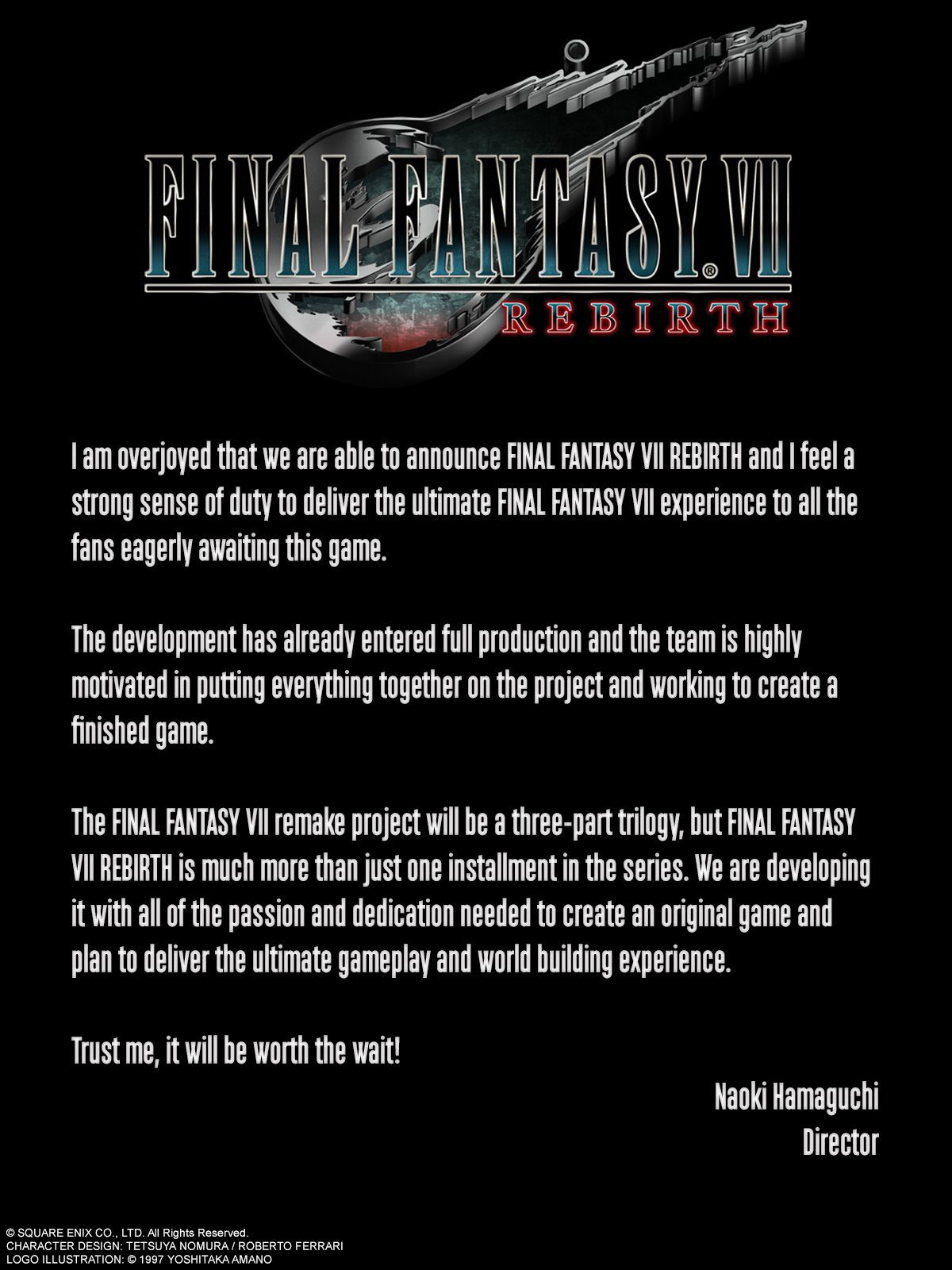 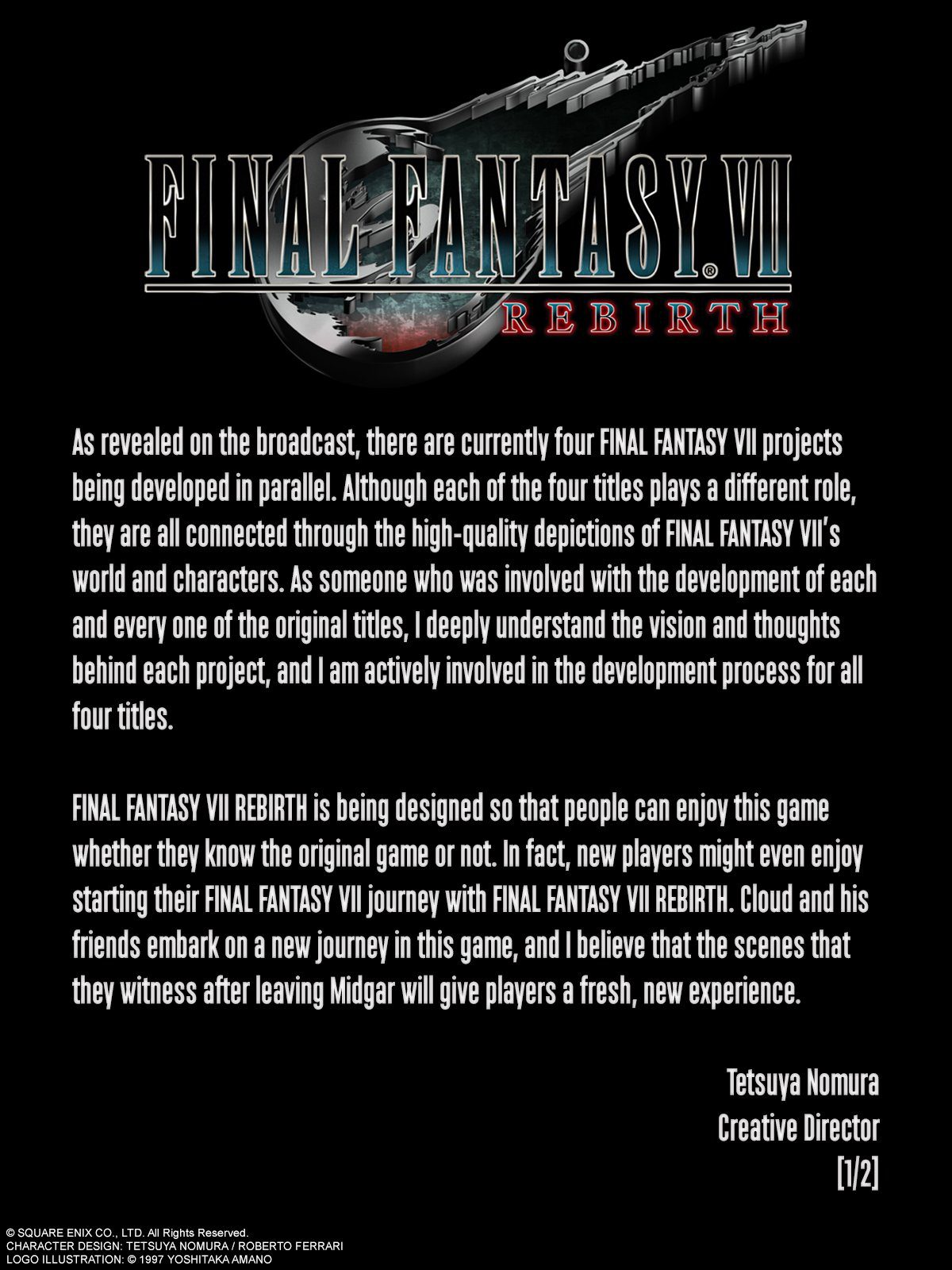 Let’s hope Yoshinori Kitase is correct regarding the 2nd part of a trilogy typically being “fan favorites” featuring iconic story twists and character development when Final Fantasy VII Rebirth releases as a PS5 exclusive around the 2023 winter projected release.

I can’t be the only one that thinks that Crisis Core looks like FFVII but with Zach and the others skin slapped onto them. I understand it all being based in the same city and similar time period, but I would expect a bit more polish or changes to make it stand out a bit more for uniqueness.

I also like both FF7 and Crisis Core and don’t like the idea of them milking these remakes as a money grab like so many other companies have done.

I wish they’d stop milking the nipples off of this. It’s really sad at this point.