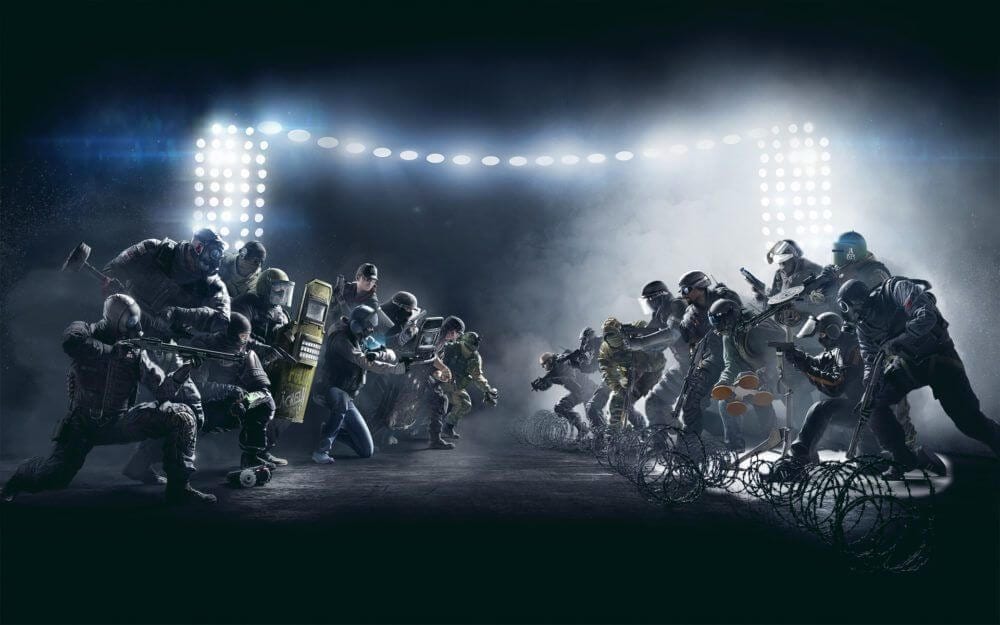 I’ve been playing first person shooters for a long time now, from Medal of Honor: Frontlines on the Nintendo Gamecube, to Halo 2 on Xbox, all the way up to last year’s Battlefield 1 on the PlayStation 4. I’m no stranger to the genre, but I hadn’t truly experienced a game quite like Tom Clancy’s Rainbow Six: Siege. The intense three minute matches, the crushing feeling of letting a clutch slip through my hands, the swell of excitement and accomplishment when I ace against the opposition. It truly is addicting, and I love how it makes me think about how I’m going to approach a certain situation, rather than the mindless twitch shooting you see more often than not in Call of Duty and even Battlefield. I love me some twitch shooters, but the tactical nature of the Rainbow Six series is a different beast.

The game was originally shown off at E3 2014, and as is the case with many AAA titles, did not fully deliver on the promise of what was shown. The reveal showed off the house map, but rather than just specific spots, the entire house was seemingly destructible. It looked insane. Definitely scripted, but insane nonetheless. What we ending up getting was significantly stripped down in terms of the amount of interactivity you could have with the environment, but the tactical gameplay was still there. Deciding whether breaching through a wall to get to your targets or picking people off while hanging upside down at a window is the better option is part of the allure. Add in each operator’s unique skill, and the decisions you can make are endless, whether its Sledge busting through walls like the Kool-Aid Man or Mute laying down drone cancelling scramblers. 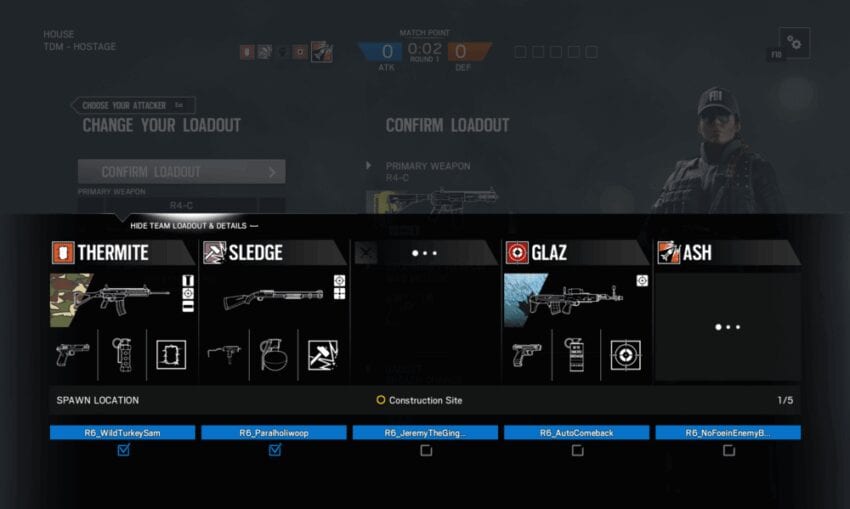 The game also forces you to be strategic whenever you select your operators and weapons. Some game modes call for different weapons, or for you to leave certain items out of your load out. The most obvious being no grenades/Fuze Charges on hostage. That’s just a recipe for disaster, as the hostage’s death causes the round to end and the opposing team gets a point. I learned pretty quickly NOT to throw grenades into the hostage room, because it almost certainly results in a prompt team kill at the beginning of the next round. On a map like Favela, almost everything is made of wood, so there are many different ways to gain a vantage point when rappelling. Flashbangs are highly important as well, especially in Hostage mode, because you can blind the enemy and clear a room if you are coordinated enough.

As much as the game is about taking out your opponents, conducting reconnaissance is just as important. Planning out your attack is always smarter than running in blind with guns blazing. You will die pretty quickly that way, so using drones to plan your route through the building and your breach patterns is key to formulating an effective team. That’s not to say that rushing the defenders is a bad tactic every time, because some of my most fun wins have been from taking the initiative and rushing unsuspecting enemies. 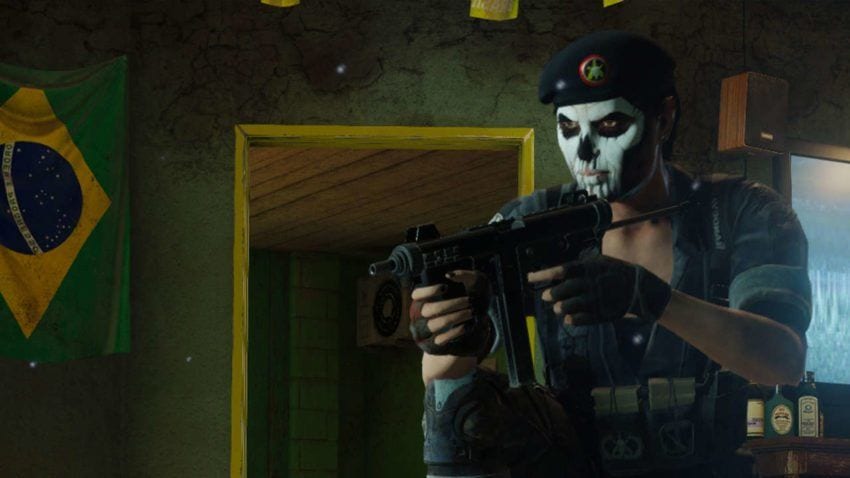 Surprise is the most powerful tool you have at your disposal here. For example, lurking in a corner waiting for members of the enemy team to sneak by you while playing Caviera is highly effective. You can watch the attackers slip by you and approach them from the rear with her Silent Step power and her extremely powerful silenced pistol. Down one of them, and you can interrogate them to reveal the locations of the rest of their team for your squad. Pair that with her USAS automatic shotgun and she is nightmare fuel for anybody unfortunate enough to be on the receiving end of her weapons. On the attackers side of things, the SAS Operator, Sledge, can use his tactical sledgehammer to bash through walls. If certain conditions are met, you can attack them from an unbarricaded wall. Pair this with his amazingly versatile choice of loadout, and you have one of the best attackers in the game.

I don’t normally mention this when I’m talking about a game, but it does have to be said: the community surrounding this game can be very toxic at times, even compared to other cooperative based shooters. It’s not a fault of the game itself so much as it is an unbridled pain in the behind when you just want to enjoy yourself. Whether it be getting dropped into a lobby of AFK users or having that one jerk on your team who kills you and the rest of your poor teammates and blindly attempts to take the opposing team by himself, it is aggravating how disrespectful many of this game’s players are. If you screw up, you can get some pretty nasty messages sometimes, and some people outright hate you for some of the Operators you choose. I can’t tell you how many people I’ve seen get pissed off when they get killed by characters Fuze, Ash, or Kapkan. 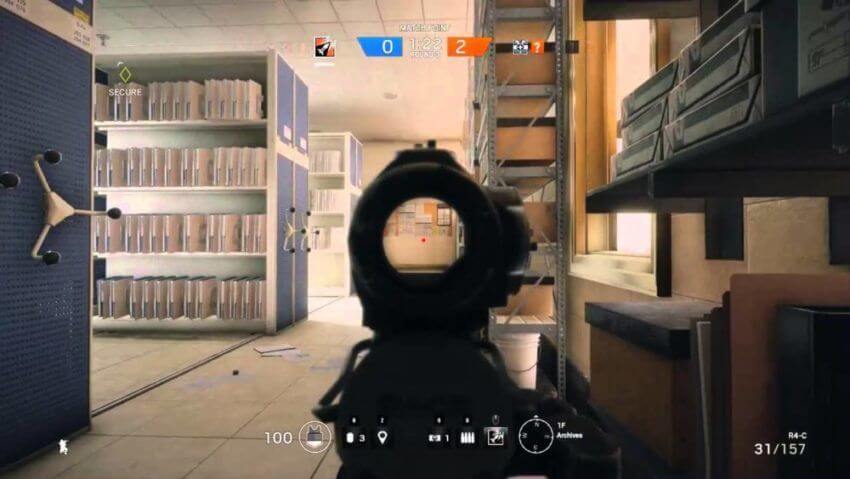 Rainbow Six Siege also has some pretty poor balancing issues, and Ubisoft will break one character after they fix another through patches. For example, Blackbeard, the Navy Seal with bullet shields mounted to his rifle, used to be a monster. They ended up nerfing his shields to the point now where he’s pretty weak. He’s still an okay character to play as, but there are better choices. On the broken end up the spectrum, Ash basically doesn’t have a head hitbox, and a lot of times the fire rate on her R4C rifle, paired its accuracy with her mobility, makes her the most overpowered and imbalanced operator in the entire game by far.

Still though, none of this outweighs the undeniable thrill Rainbow Siege‘s intense gameplay can give you. Its one of those games that is a rollercoaster of emotion when you play it for long enough. Whether you end up happy, sad, or angry after a match, its so much fun and I fully understand why it’s become an e-sport sensation. Even with its unbalanced characters, there are good ways of countering those balance issues if you know your way around the game mechanics. In regard to the toxic community, there’s really not much that can be done about it, and everybody has to accept that. But for the most part, I’ve played with some really respectable people and that’s a big part of why I do enjoy the game so much. 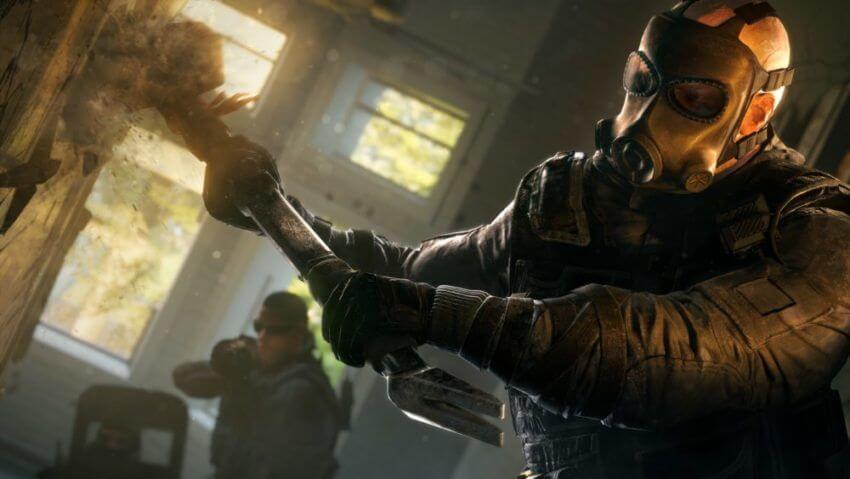 Tom Clancy’s Rainbow Six: Siege is a game I wholly recommend trying out if they ever have a free weekend on Playstation/Xbox/PC. Its not for everyone, I understand that. If you love games like Call of Duty and are expecting something similar, you’re in for a rude awakening. I know I was at first. But for those that take time to learn its intricacies and love the feeling of outsmarting you enemies, Tom Clancy’s Rainbow Six: Siege is the game for you!

That’s what I’ve been playing lately, have you played the game? Let us here at Geeks+Gamers know what you think of it in the comments below. What have YOU been playing lately? Be sure to stay up to date on all the gaming content we put out. Stay nerdy, everyone!