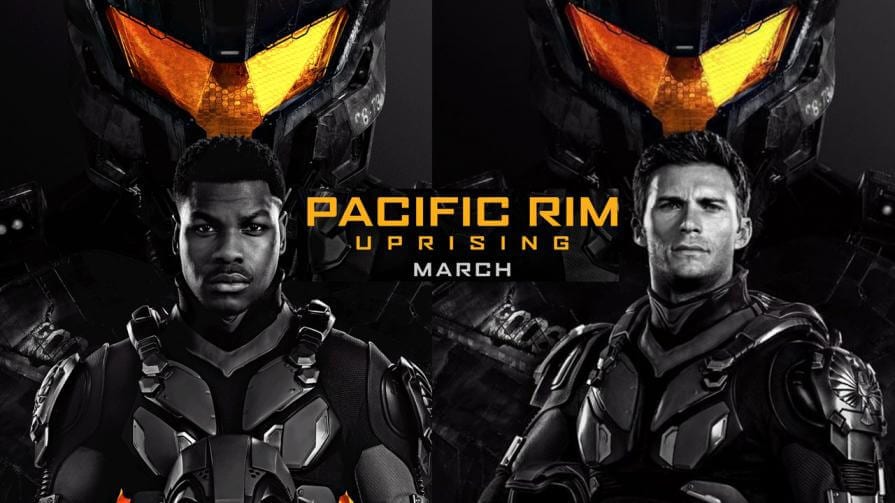 Pacific Rim: Uprising is the sequel to the 2013 film, and is directed by Steven S. DeKnight, starring John Boyega, Scott Eastwood, and Cailee Spaeny. The story of Uprising takes place a decade after the first film. The Kaiju portals are closed and the world is moving towards unmanned Jaegers for defense. After a scrape with the law, Jake Pentecost (Boyega) is forced to return to battle new enemies from within.

John Boyega is awesome as Pentecost. The script asks him to do some pretty stupid shit, but Boyega is so talented and charismatic that I got over the eye-rolls and sighs so many moments gave me. He has a couple of scenes, particularly with Cailee Spaeny, that are excellent and their chemistry is pretty on point. Speaking of which, Spaeny is great as Amara Namani, a tough street kid who built her own Jaeger from scratch. She bounces off a lot of the cast very well, delivering some biting one-liners and shining in some of the more emotional scenes. I’m definitely interested to see where she goes from here. Scott Eastwood is… surprisingly okay. Seriously, though, he has some rock solid comedic chops, provided you give him worthy content. He shares a lot of good moments with Boyega’s character earlier on that I couldn’t help but laugh at.This film really loses me with one performance, however, and that is Charlie Day. Oh boy. He’s good in the first half of the film, but in the back half he truly lost me. His performance is so over the top and grating, and the dialogue they wind up giving him is AWFUL.

From a plot perspective, Uprising isn’t particularly challenging, as it shouldn’t be. The problem is, a lot of the story they try to tell just isn’t interesting enough to entertain me when Jaegers aren’t punching Kaiju in the face. I don’t need wall-to-wall action, just give me something of interest. In the first film, they dealt with the issues in “drifting” between two people, a romantic relationship, and figuring out how to stop the Kaiju invasion. Uprising starts with the concept of a rogue Jaeger and the dangers of automation. The problem is the back half of the film, when the twist is revealed; the villain is laughable and that “twist” is so unimaginative. The worst part is how abrupt the ending of Uprising is, while simultaneously being INSANELY sequel baity (although that ending does set the franchise up for something that could be interesting). 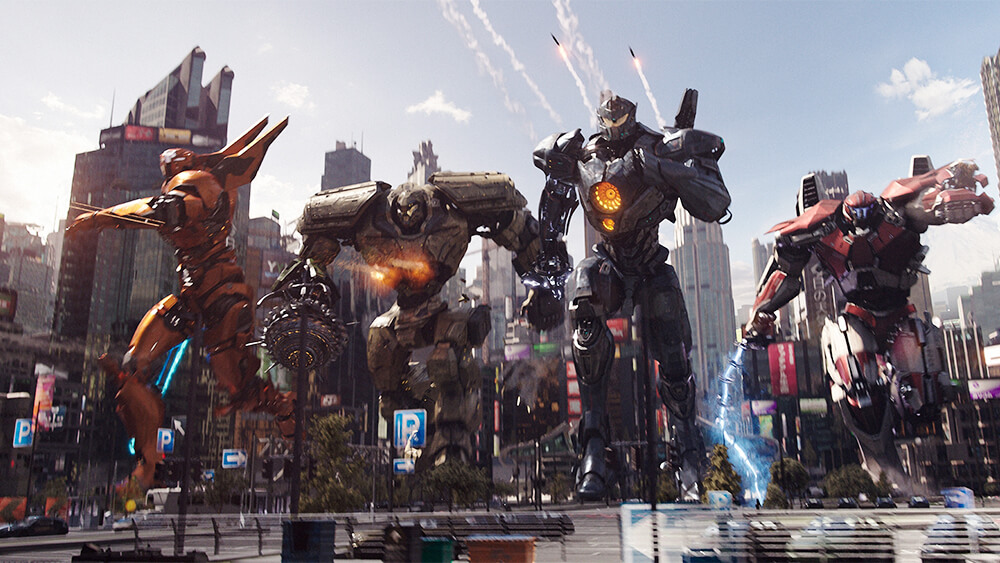 The characters are hit and miss. There are scenes where I really enjoyed watching Jake Pentecost as a protagonist: when he’s returning to the army, when he’s arguing with Eastwood’s character, and the scenes with Amara. There are also a lot of scenes involving him that caused me to roll my eyes on a semi-consistent basis; scenes like him imitating the “Salt-Guy” meme and some of the other really cringe-worthy jokes. Amara has some great character moments, none of which I’ll spoil, but they really don’t explain certain things about her. How she built her Jaeger from scratch, how she knew how to engineer it or how she knew how to create the system that allows her to control it on her own are questions that we don’t see answered.These are not small plot points, as they become the basis of her being in the rest of the film and even come into play in the final act. Then you have characters like Scott Eastwood’s, who is so stereotypical and one-note that he doesn’t feel like he has a distinct personality. Eastwood is a hard-ass soldier who has to train up some recruits and really doesn’t like Pentecost because of past experiences. Sounds like a bunch of different movie characters we’ve seen before, right? And finally, you have Charlie Day as Newt, who is so overblown it’s unintentionally comedic. The execution of his character arc is so laughable and cringe-worthy at times that it comes off as a huge missed opportunity.

The action scenes are pretty entertaining, mostly because they distract from the stock plot. The monster and robot battles are basked in sunlight, a change from the first film that featured night battles, allowing the detail on the Kaiju and Jaegers to really be brought out and shown to the audience. This time around, the Jaegers feel nimbler, faster, and there’s more variety in the way they fight. It’s still the same building smashing, everything-but-the-kitchen-sink action, but perhaps feels like it has more heart this time around. What I’m referring to might be a spoiler, so I won’t talk about it in depth, but there’s a great moment towards the end of the battle that actually choked me up. 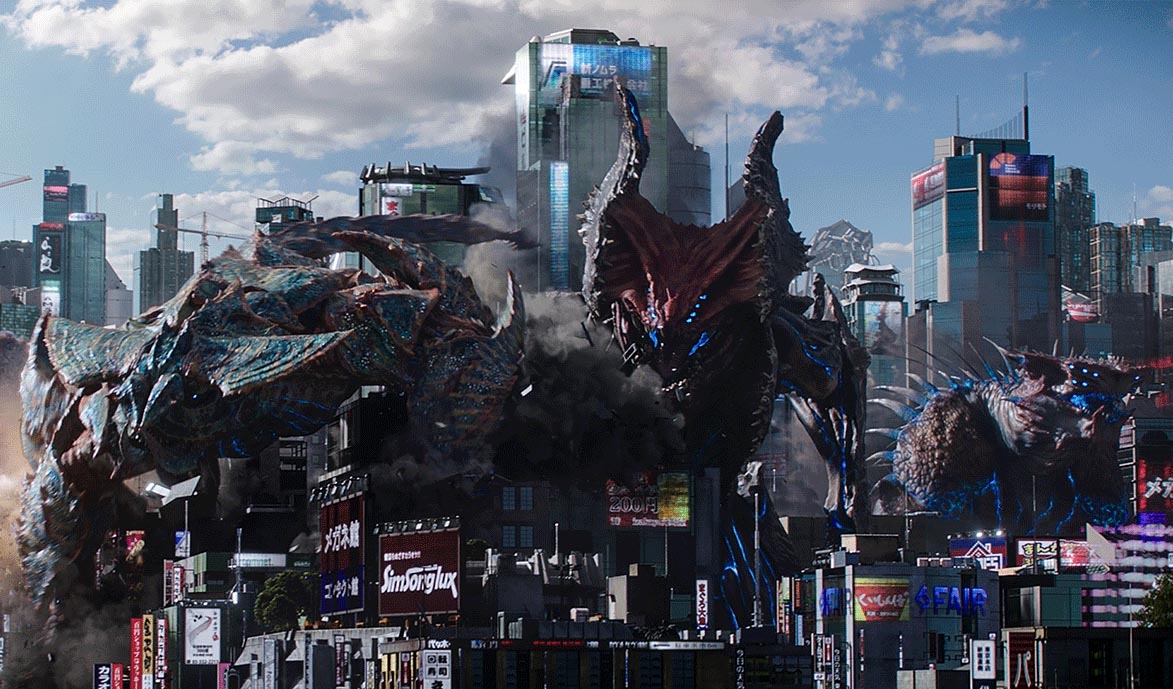 The visual effects are stellar, with gorgeous animation for the Jaegers and incredible detail with the Kaiju. There are a bunch of sequences that I was so drawn into I couldn’t tell what I was seeing was fake anymore. Having these battles take place mostly during the day really helps, as you get to see every detail they put into the character design this time around. The cinematography looks solid; it’s not going to win any awards, but it gets the job done. Where this film gets rocky from a technical point of view is in the editing; this movie is shorter than the first, yet it feels longer. Part of this comes from the story being boring, but also from sequences that feel drawn out or unnecessary.

Overall, Pacific Rim: Uprising is a bit of a mixed bag. There are some entertaining action scenes, funny jokes and great performances, but it’s really weighed down by a boring narrative, an insanely cringe-worthy performance from Charlie Day, and some aggressively obnoxious jokes. This is corporate film-making at its worst, with a sequel-bait ending as the bow on top. I wish I could thoroughly recommend this film, but I can’t. If you’re a big fan of the first installment, you’ve probably already seen it like me, but if you’re on the fence, just wait for home video or Redbox.

What did you think of Pacific Rim: Uprising? Let me know in the comments below. Stay nerdy everyone!

Pacific Rim: Uprising has a great cast, entertaining action, and beautiful effects but is dragged down by a horrible performance, boring narrative, and some awful humor.