Halloween III: Season of the Witch (1982) is a supernatural horror film written and directed by Tommy Lee Wallace. The film centers around Dr. Daniel Challis and Ellie Grimbridge as they investigate the Silver Shamrock Novelties company, which is under investigation for the death of Ellie’s father. A lot of Halloween fans still haven’t seen Halloween III due to its giant, Michael Myers-sized hole. However, in skipping this entry, they are losing out on one of the best horror films of the 80s. Halloween III is such an underrated and under-appreciated genre movie. It couples an amazing cast with a cool premise and delivers a surprisingly good time to those who give it a chance.

Tom Atkins is fantastic as Daniel Challis. Challis is an alcoholic struggling with a recent divorce and shared custody of his two children with his now ex-wife. When the events of the first act hit his character full force, Atkins dives into the role and nails every single necessary aspect. He is one of the best Every Man heroes ever to perform in a horror film. He has to deal with extraordinary circumstances along with bitingly real issues over the course of the film. His co-star, Stacey Nelkin, is equally good. She nails the inquisitive nature of Ellie on top of just being drop-dead gorgeous. Dan O’Herlihy is great as Conal Cochran, the main villain of the film. He balances menace with insanity and has one of the best villain voices. He oozes charisma and threat cementing himself as one of the best horror villains of the 80s. 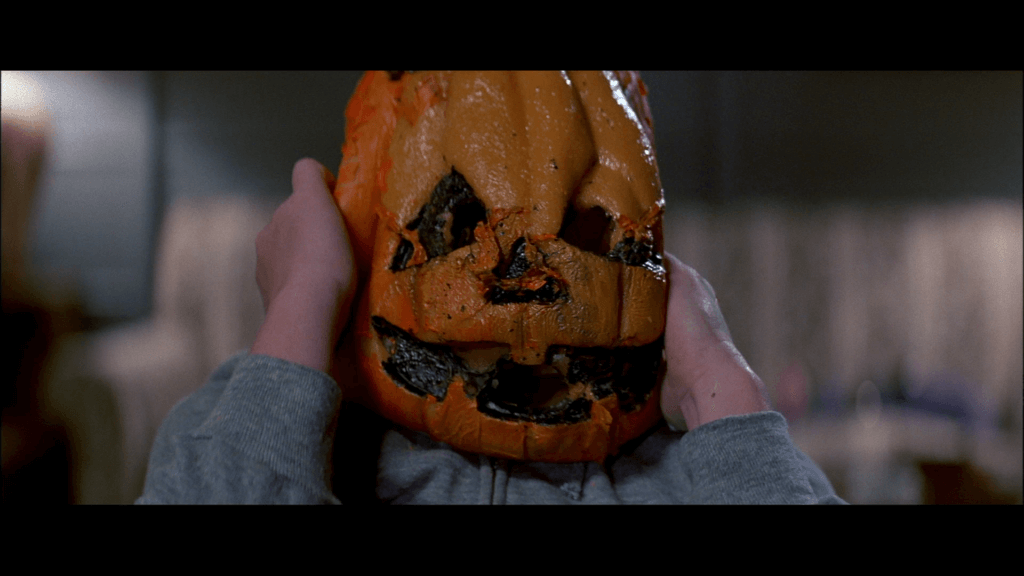 The film is, as I said, directed by Tommy Lee Wallace, the director of the TV version of It (1990). He draws some great performances out of his main actors and accomplishes something truly difficult in crafting an incredibly dark film that never feels suffocating. The main crux of Halloween III involves the death of children and the possible execution of millions of them, but by embracing the more whimsical elements of its story, it thrives on a truly fun level. The opening of the film — the classic Halloween pumpkin intro redone with a twist — has this air of absolute malevolence over it from John Carpenter and Alan Howarth’s fantastically atmospheric score. The synth tone of its predecessor returns and, perhaps, fit even better with this film (for reasons that are a spoiler).

This film looks dark from the opening scene of a man being chased through the night, to the Silver Shamrock Factory in Santa Mira and the hotel that Challis and Ellie stay at during their investigation. The camera glides smoothly and there are some truly great shots. My favorite scene in the film, for multiple reasons, is the final one. The way it is shot lends a lot to my love for it. The closeup that returning Director of Photography Dean Cundey utilizes in this scene magnifies the desperation and horror on Challis’ face, using Atkins’ powerfully emotive face to great effect. 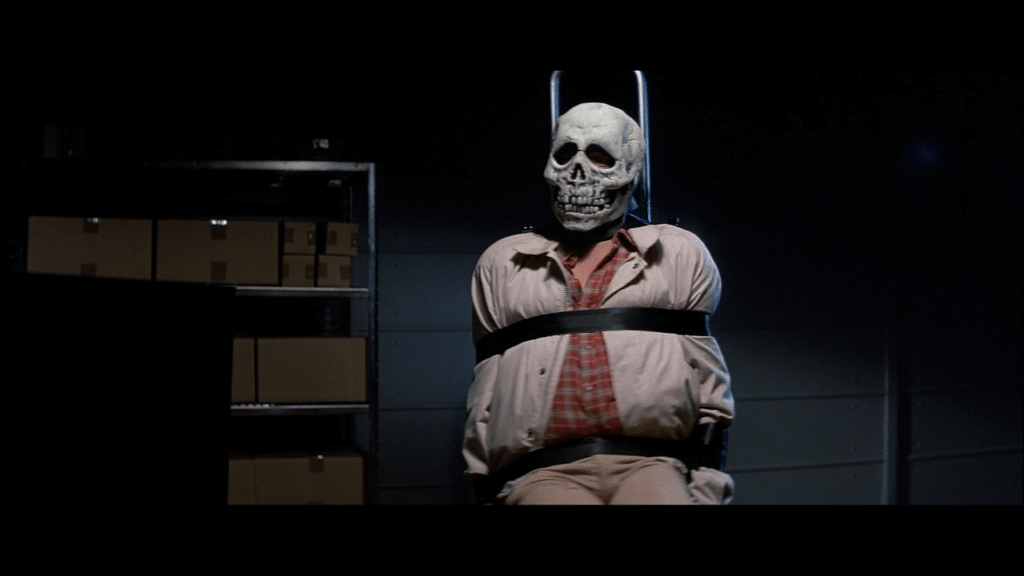 There isn’t a man in a ghostly mask slaying people in this film. Instead, Silver Shamrock sends these men in suits who are inhumanly strong and seemingly have no sense of self-preservation. If found out, they have no problem dousing themselves in gasoline and lighting a match. Their appearance and how calm and collected they are is slightly unnerving. The kills in the film range from nasty to straight up demented. Wallace doesn’t glorify the death, but its used for maximum impact to show viewers all that is at stake and just how bad it will be if evildoers succeed in their master plan.

I actually wish this film was a little longer so, maybe, we could get more background on Cochran and the magic he is utilizing. A lot of times, I think less is more when it comes to explaining backstories in these films, but I think it would have been interesting to see a bit beyond what we did, which would have further enhanced the film. I also do wish we got to spend more time with Ellie and Challis before their romance began. This would have strengthened the third act even more, in my opinion, turning it from a really good to a great finale.

Halloween III: Season of the Witch (1982) is a fantastic and underrated horror film. It has a great pair of leads, a great villain, and some amazing concepts. It could benefit from more backstory and a stronger written romance but those don’t bring down the film too much. If you have put off seeing this film because Michael Myers isn’t in it, please do yourself a favor and pick it up.

Halloween III: Season of the Witch