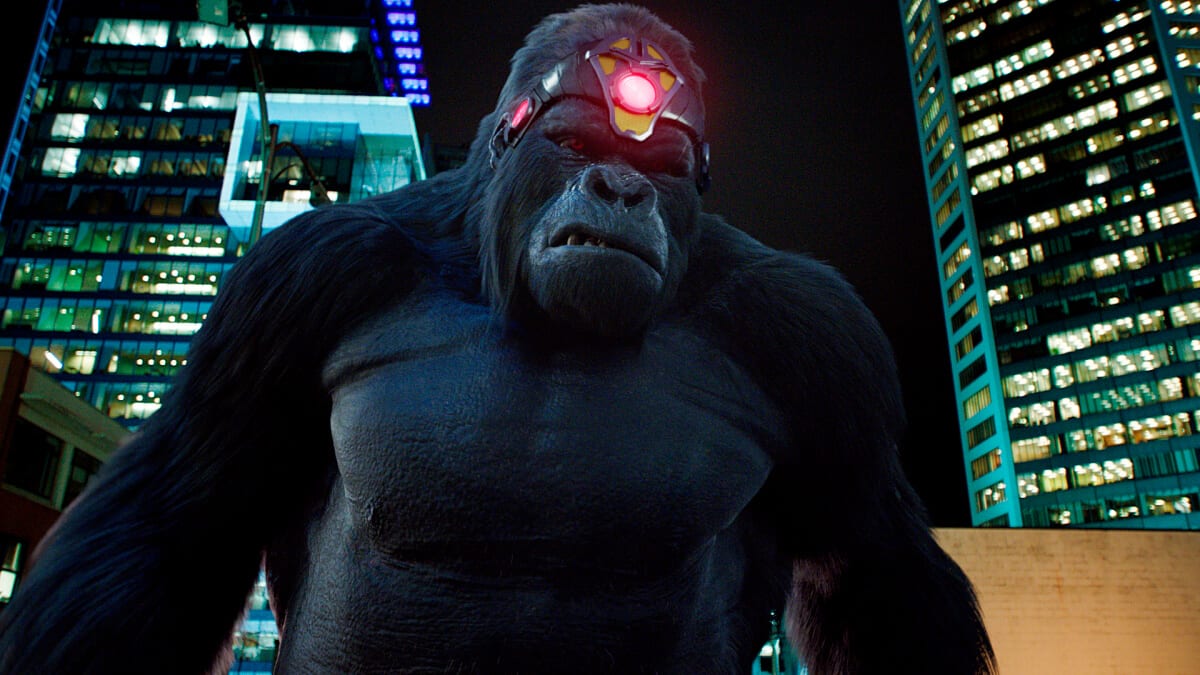 It was a Friday night fight – err, rather, a Tuesday night, but you get the picture; beast versus beast, and king of the jungle versus the king of the seas. I am, of course, talking about this week’s episode of The Flash, “King Shark vs. Gorilla Grodd.” Was the card overhyped? Read on to find out!

Cisco has finished his metagene cure and is determined to start testing on a volunteer metahuman. The key word here is “volunteer,” and it’s one of the topics of contention in “King Shark vs. Gorilla Grodd,” for not only Team Flash, but for me as the viewer. Following a brief brainstorming of which alternate earth they could travel to in an effort to pluck up a potential at-will guinea pig, Barry notes that they can enlist Lyla’s help at A.R.G.U.S., who has had the mutated King Shark (Earth-2 Shay Lamden) under surveillance. As a matter of convenience, it so happens that an A.R.G.U.S. scientist, Tanya Lamden, has been working with her husband’s alternate earth doppelganger to revert his intellect to the functioning level of a human rather than that of a rampaging and bloodthirsty mini-kaiju. The crux of Tanya’s progress with her not-husband is a high-tech telepathic crown that allows her to communicate with Shay. Naturally, something goes awry and futzes with the team’s efforts to work with Lamden (the one with the fins). Barry is forced to make a quick decision, one that I’ll discuss in short order.

When King Shark goes wild on the team, he gets ahold of Cisco and is primed to make him his new chum, so Barry acts fast and hits the mutant with the metagene cure, quickly reverting him to human form and proving that the cure works. Hooray! Right? Well, one might think it was high-fives all around following this, but Cisco and Caitlin are actually pretty pissed off at their fleet-of-feet leader. Why? Because, Barry chose to “use the cure as a weapon” against King Shark – which I might add prevented Cisco from ending up a snack. When the two of them confront Barry directly, to their credit, they pull out of him that he had planned to use the cure in a similar manner with Orlin. While their anger over Barry’s subversive plans is warranted to a point, Cisco’s displeasure with his friend for saving his rear end in isolation is absolutely not and had me throwing my popcorn (yes, I ate popcorn while watching “King Shark vs. Gorilla Grodd”) and yelling, “You ingrate” at Vibe. The only one who seems to be pleased with the cure’s use is its recipient, Shay Lamden, and appears grateful not to be a walking man-shark anymore. The catch is that the cure needs to be slightly modified further before it can be a permanent fix for Lamden.

The involvement of the furry side of this fight card deals with the team sensing something fishy with the way that King Shark lost control of his faculties, and sure enough, it was due to external forces – Grodd’s telepathic powers. Grodd takes control of Cisco and Caitlin, and commandeers Dr. Tanya’s telepathic crown, with the goal of amplifying his own telepathic powers, which would allow him to control the minds of everyone in Central City. The ensuing battle between Grodd and King Shark occurs when Shay gives up his human form (presumably indefinitely) in order to take on the telepathic ape in his own form of gorilla warfare. I’m not going to lie; the fight itself is pretty badass, to the point where I almost entirely ignored Barry and Nora’s involvement. The CGI effects for King Shark and Grodd in “King Shark vs. Gorilla Grodd” are pretty high-tier (for a CW show anyways), and I appreciated the attempted lighting effects on both titans’ bodies from the water in which they’re covered. Staying on-topic with the CGI, Shay Lamden’s reversion back into a human being and his subsequent transformation to his King Shark mutation are both done quite well too. It’s too much to expect this quality for every episode moving forward, but it was a nice treat. As a quick aside, Gorilla Grodd is one of the biggest things wrong with CW’s Flash. The show has been consistently using classic Wally West (not the version they have in the show, which is loosely based on Wallace West II from DC’s New 52 era) villains throughout each season and missing every possible opportunity to use actual Barry Allen Flash villains. They squandered their opportunities with the Rogues, and especially with Grodd, who is one of his most notorious foes. An entire season could easily be dedicated to Grodd if they were to use him properly, and this season’s atrocious usage of Cicada is proof positive that they should have gone that route. Rant over.

Following the events of the last episode, wherein Nora managed to make her father’s most notorious mistake… 52 times… to avert outcomes that involved her friends or family members, Iris has been feeling on edge. This is pretty understandable, as one of the aforementioned scenarios involved her dying. After some father-daughter time with Joe, Detective West notices that something is off with his daughter and notes that she appears to have an aversion to spending time at her shiny new office space alone out of fear for Cicada catching her off-guard again. The scene that ensues is a fairly cookie-cutter girl “gets mad punching a punching bag in order to feel more confident about herself” scene. It’s a pretty inconsequential sequence and feels more like filler than story or character progression; in fact, it’s one of Iris’ weaker moments this season, especially when compared with the much-improved use of her character the last 15 episodes. Joe’s character also felt very surface-level in “King Shark vs. Gorilla Grodd,” which is definitely atypical for him. The rumors swirling the drain of the internet that he may be departing the show following this season may hold more merit than we first thought. He talked about “finding renewed life” in mind and body when in Tibet with Wally, but I saw no signs of this reinvigorated energy in the show’s stalwart old man. This filler sequence aside, “King Shark vs. Gorilla Grodd” is yet another example of how inconsequential and useless Cicada is to the season. While this episode is light on plot, it supplements it with entertaining concepts and action, topped with some of the series’ best CGI effects to date.

"King Shark vs. Gorilla Grodd" wasn't exactly what I would call "plot heavy," not by a longshot, but the action and great use of CGI kept me entertained.