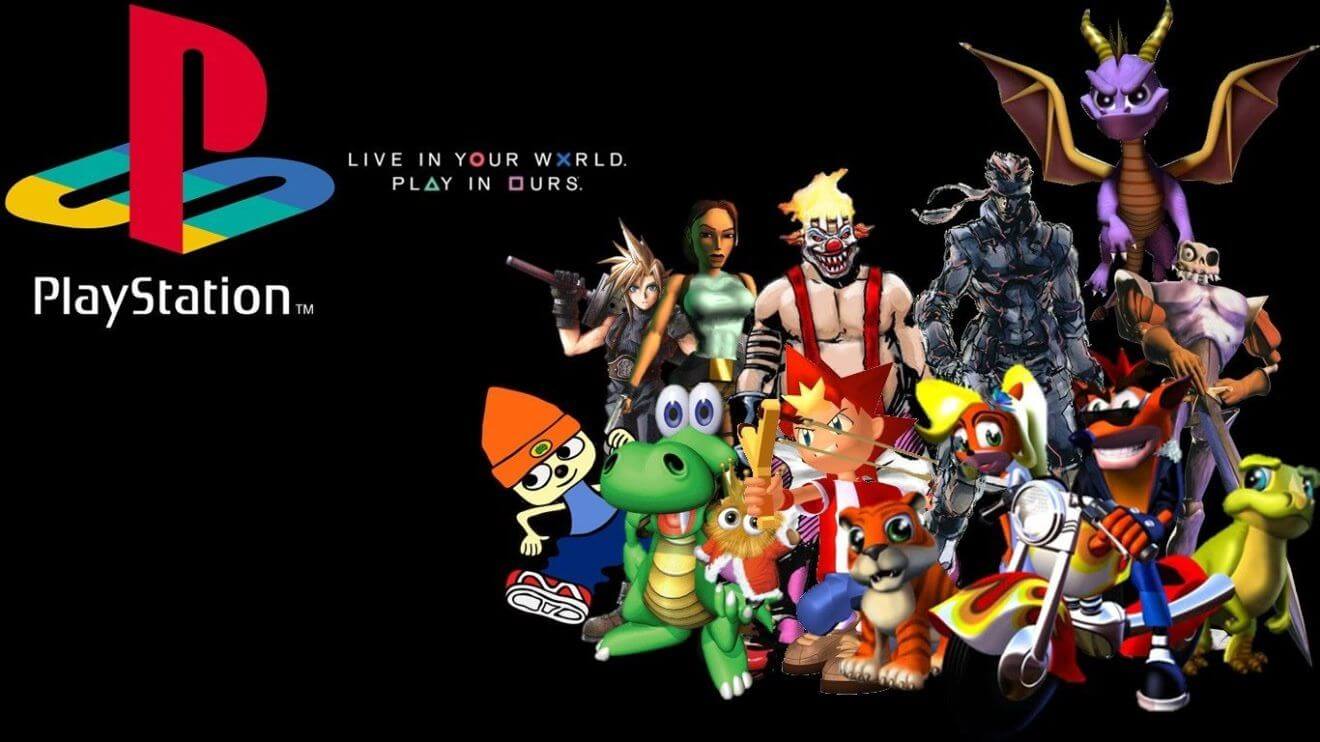 For a moment, think back twenty years with me. Tamagotchis had taken the world by storm, the words “Bop it! Twist it! Pull it! Pass it!” were stuck in everyone’s head, and Sony was in the midst of creating one of the world’s most iconic systems: the PlayStation 1. As the world’s first CD-ROM based machine capable of rendering real 3D games, Sony’s console introduced us to some of our most beloved video game characters. As we reminisce, let’s take a moment to look at the best PlayStation 1 games.

Considered the first fully capable 3D platform game for the PlayStation, Spyro the Dragon is one of the most iconic titles attached to Sony. Despite utilizing a relatively new 3D engine, this game featured an extremely colorful environment, as well as sharp animations. After his first appearance in 1998, the charming, purple dragon became one of the most recognizable video game characters amongst the gaming community.

The memorable soundtrack, adventurous atmosphere, and well-designed characters and environments made for an extraordinary  experience. Like most gamers who had the opportunity to experience Spyro the Dragon, I will never forget the first time I breathed fire, charged an unsuspecting enemy, or defeated Gnasty Gnorc. To put it simply, Spyro’s first entry into the gaming world helped define the adventure genre. For that reason, Spyro the Dragon has landed at #10 on my list.

Let’s be honest; you can’t talk about the PlayStation 1 without mentioning Final Fantasy VII. This game revolutionized the RPG (role-playing game) genre. Introducing us to iconic characters such as Cloud and Sephiroth, Final Fantasy VII succeeded in all three major phases of gaming (gameplay, story, and graphics).

The Materia-based battle system is still defining the way games are designed today, and Final Fantasy VII’s story is still recognized for including one of the biggest plot twists in all of gaming. Not to mention, the game’s graphics were significantly better than anything that had been published at the time. All of this culminated into one of the best games on the PlayStation 1, and quite frankly, one of the greatest RPGs of all time.

Before the days of Spider-Man 2, the PlayStation 1 Spider-Man offered the best web-crawler experience. From crawling up skyscrapers to web-swinging across the city, this game allowed you to do anything Spider-Man himself could do. Utilizing advanced video game physics and presentation, Spider-Man did a phenomenal job of engrossing you into the game world.

Futhermore, it is safe to say that the geniuses at Activision more than succeeded in creating an engaging and stylish action game worthy of representing the long-standing comic book. With no better superhero game available at the time, Spider-Man presented itself as the perfect platformer for fans of comics and video games alike. Based on all this and more, I have Spider-Man at #7 on my list.

Known as the long-awaited sequel to Blood Omen, Legacy of Kain: Soul Reaver was one of the most iconic action adventure titles on the PlayStation 1. Utilizing a dark story, excellent voice acting, and various mechanics, this game was a massive success.

Stylistically speaking, Legacy of Kain: Soul Reaver was quite different from its top-down RPG predecessor. Utilizing a gameplay system very similar to Spyro the Dragon, this game was a hell of a fun time. From setting vampires on fire to impaling them with stakes, Soul Reaver gave its players plenty of opportunities to kick some serious vampire ass.

Although it may have been too easy, there weren’t too many other games that offered the same kind of kickass experience as this entry into the Legacy of Kain series. Thanks to its greatness on so many different levels, Legacy of Kain: Soul Reaver has found a spot at #7 on my list.

Did your parents ever mistake Gran Turismo 2 for a TV program? If so, I wouldn’t be surprised. Visually speaking, this game was brilliant. The endless selections of cars (over 600 to be exact), licenses, courses, and upgrades were unmatched. The accuracy in car specifications and mechanical possibilities were utter genius.

Of course, Gran Turismo 2 was more than a glossy, tech game. This entry into the Gran Turismo franchise helped revolutionize the racing sim genre with its accurate yet stylish action. Simply put, Gran Turismo 2 was about as good as it got on the PlayStation 1. Even gamers who may have been disinterested in cars or racing were drawn to the ingenuity of this title. Gran Turismo 2 has landed at #6 on my list.

This game was physiologically devastating. Silent Hill aimed to make you afraid to go asleep at night, and I must say, they were quite successful.

With its use of opaque fog, overwhelming darkness, and various dimensions, Silent Hill created one of the most terrifying game environments ever seen. Backed by a frightening soundtrack, this game never lets up on its eerie atmosphere. And, in the end, it didn’t help keep our nerves calm that the protagonist was an awkward and inept fighter.

Because of this, Silent Hill was an excellent entry into the darker universe of video games. To this day, many game designers still look to Konami’s iconic title for inspiration in their creepier endeavors. It should come as no surprise that Silent Hill has landed at #5 on my list of the best PlayStation 1 games.

Tony Hawk Pro Skater combined two of the biggest pastimes of the 90s – skateboarding and video games. From the start, THPS was an instant classic. So, it only makes sense that Tony Hawk Pro Skater 2 became one of the most iconic titles on the PlayStation 1.

Featuring an increased level size, custom skaters, and the ability to create your own unique park, THPS2 more than built on Tony Hawk Pro Skater’s concept. Not to mention, this game had a hell of a soundtrack. “When Worlds Collide,” anyone?

Quite simply, Tony Hawk Pro Skater 2 created an entirely new breed of gamer, as well as helped shape the sports genre. Due to its legacy and its quality, it has landed at #4 on my list.

Resident Evil 1 was iconic in its own right; however, it suffered from poor mechanics and awkward FMV (full-motion video) sequences. Once Resident Evil 2 released, it was obvious Capcom had learned from their mistakes. The sequel to Resident Evil was simply better in every phase of gaming. With the inclusion of new weapons, better character animations, and greatly improved FMV sequences, it was hard not to love Resident Evil 2.

Quite similar to Silent Hill, Resident Evil 2 featured an overwhelming feeling of horror and anxiety. The grotesque environments, unique puzzles, and interesting characters made for some of my most memorable memories on the PlayStation 1.

Even though Resident Evil 3 would go on to offer advanced gameplay and visuals, it never quite gave me the same feeling as its predecessor. And, for that reason, Resident Evil 2 sits at #3 on my list.

#2 Castlevania: Symphony of the Night

Symphony of the Night is commonly the first title that comes to gamers’ minds upon hearing the Castlevania name. That is entirely justified considering the game’s phenomenal quality in every aspect.

With the decision to amplify the 2D graphics instead of delving into the murky waters of 3D, Symphony of the Night didn’t appear to be anything visually extraordinary. But this is where that old proverb, “don’t judge a book by its cover” comes into play. Despite its disappointing visuals, C:SotN took similar gameplay mechanics from previous titles and significantly improved upon them. Featuring a plethora of weapons, an entire cast of bad guys, and plenty of secrets to unlock, this entry into the Castlevania universe was not only a vast improvement over its predecessors, but also one of the most iconic 2D platformers ever created. It more than deserves its spot as #2 on my list.

Simply put, Metal Gear Solid revolutionized the gaming community. Featuring vastly different game mechanics than anything published at the time, Metal Gear Solid was a game of stealth and story. Players simply couldn’t run into a room guns blazing. If so, they were met with swift defeat. Patience and strategic movements were key to successful beating MGS.

At its core, Metal Gear Solid was a breathtaking, interactive experience. Its cinematic cutscenes and carefully-designed levels were evidence of a production value not yet seen amongst the gaming community. It was evident Konami was aiming high with this project, and I must say, they succeeded. For that reason, Metal Gear Solid has landed at #1 on my list of the best PlayStation 1 games.