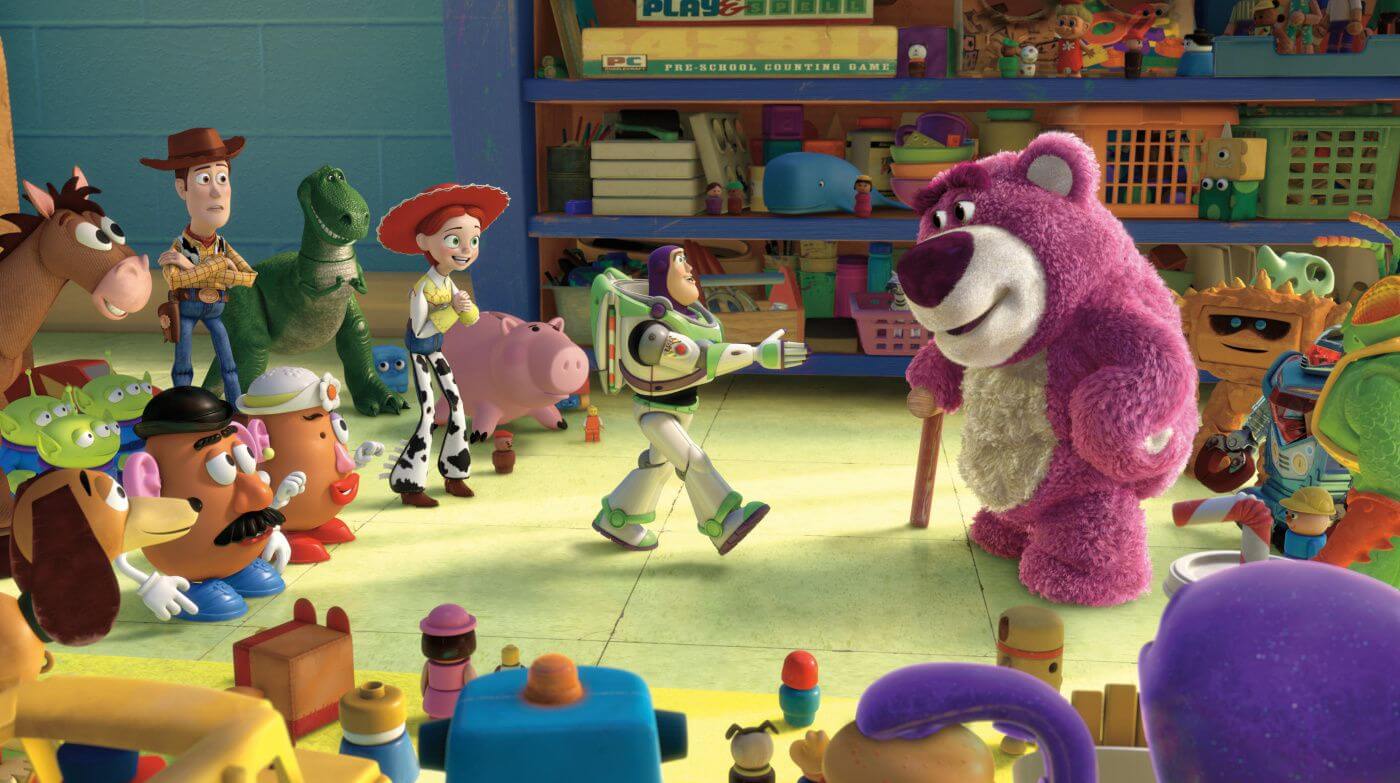 Munir: Hello and welcome to our first Pixar review from this decade. Today, we are going to review Pixar’s mega hit, Toy Story 3. Released almost 11 years after the second film premiered, it’s not exaggerating to say that TS3 was one of the most anticipated movies ever. The pressure was high on Pixar, since the first two are beloved films, and thankfully, it delivered. Audiences were crazy for it, critics loved it, and it became the first animated movie to cross the 1-billion-dollar mark. It won two academy awards for best animated film and for best original song, and it was the third and, so far, the last animated movie to be nominated for best picture.

Virginia: Toy Story was my favorite thing as a kid, and I remember wondering when they were going to make a third film. Seeing Toy Story 3 in theaters was a phenomenal experience, and I do like the movie, but I don’t love it anymore. A few years of reflection have made me appreciate the series’ second installment more and more, whereas I feel at times that Toy Story 3 borrows too many ideas from 2.

M: As you say, watching it in theaters was a fantastic experience, and I still love the film after almost 10 years since its release. I think that it’s a natural progression from the first two, and a beautiful and touching ending (at least that’s what we thought at the time) to the trilogy. While some themes can be seen in the other two films, particularly the second one, I don’t see that as borrowing, but that they are simply the overarching themes of all three films.

V: They pose the question in Toy Story 2 of what happens when Andy outgrows his toys, and then 3 answers the question. I don’t think that’s a problem, although it is a little blunt. One thing that bothers me is that Lotso Huggin’ Bear is a bit too similar to Stinky Pete from the second film. In fact, his motivation is like a mixture of Pete and Jessie’s ultimately misguided beliefs in the second one. There are also scenes in the third movie that I find difficult to take seriously, such as the incinerator scene. I just find it forced and manipulative; I can’t accept that the Toy Story gang is in an incinerator, accepting of their imminent deaths.

M: That’s fair. I, on the other hand, find those scenes really powerful. I don’t think I believed that they could die, but how they are prepared to do it as long as they are together, it’s heartfelt and touching for me. I agree that Lotso is similar to Stinky Pete, and one my gripes with the film is that, after all the hell he put the gang through, his punishment seems mild in comparison. 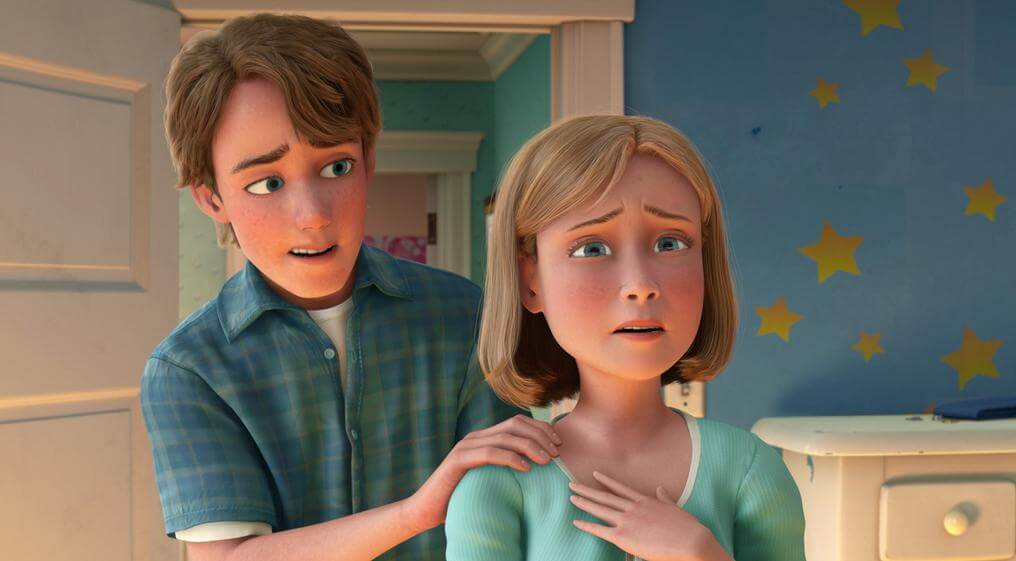 V: I have to agree there. It’s also reminiscent of what happens to Pete, for that matter; Pete gets strapped to the backpack of a young girl who wants to give him a makeover, and Lotso ends up strapped to a garbage truck because the driver remembers having the same bear as a child. Of course, the circumstances are different, but both are stuck with an owner they don’t want. It’s also weird how everyone is OK with forgiving Ken just because he and Barbie are in love.

M: I think it’s also because he rebelled against Lotso at the end. I don’t find that jarring. Now, the film has some great sequences, my two favorites being Chuckles’ story and the prison break.

V: Chuckles is truly easy to sympathize with, and I agree, the way they present his backstory is very compelling. Also of note – Chuckles is voiced by Bud Luckey, who originally designed Woody and voiced Rick Dicker in The Incredibles.

M: And Eeyore in Winnie The Pooh (2011). Animation-wise, you can genuinely see the advancements between the second and third films, while also maintaining the characters’ integrity. It’s truly remarkable, and I’m sure we are going to see the same with TS4.

V: The human characters look different, but the toys look very accurate. Each film Pixar releases is technically innovative, and that in itself is impressive. 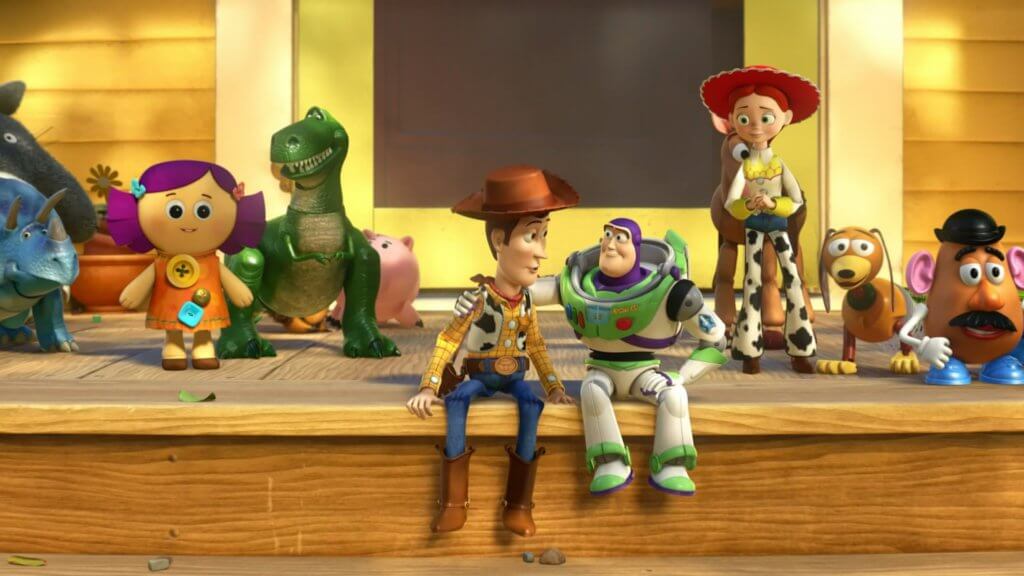 M: The goodbye with Andy is very touching, and another standout scene. I think it’s a great ending, so part of my misgivings with Toy Story 4 is that this ending was great for the whole series.

V: I agree; although I don’t think Toy Story 3 is a perfect film, I do think it’s an ending, and a really good one. It also looks like the new movie is playing back into the themes and character beats of the second.

M: Yeah, it’s not perfect, but I think it’s excellent. What do you think of the new characters? I think they were great additions, especially Trixie and Mr. Pricklepants.

V: I love Mr. Pricklepants, and the decision to have Timothy Dalton voice him was an inspired one. He’s one of my favorite actors, and he’s delightful in the part, and quite funny. I also like Trixie, Dolly, and Buttercup.

M: Yeah, they handled the new characters very well, and the film didn’t feel overcrowded, even though it had to manage a large cast of characters. They all serve their purpose.

V: I agree there. One thing that bothers me is that it feels like they sort of regress Jessie; her trust in Woody is almost immediately gone. But other than that, the characters are on point.

M: I see it more like she’s reliving her past trauma with Emily. She had some years of stability and happiness with Andy, and now it’s gone again. I think that’s why she is making rash decisions. She’s in panic mode. Everyone is.

V: And I understand that’ I just don’t like how she suddenly turns on Woody after everything they’ve been through together. There’s trauma, and then there’s character development.

M: Fair point. To wrap up, I believe that Toy Story 3 was the end of an era for Pixar. After riding high for 15 years, TS3 was the culmination of that golden period. I think it’s something similar to what The Lion King was for Disney Animation in the 90’s. After TS3’s success, it seemed that everything would be just the same for Pixar; what a difference a year would make.

V: I would definitely agree with you there. Throughout the 90s and 2000s, Pixar basked in universal acclaim and huge box office numbers. Toy Story 3 was one of their biggest hits ever, if not the biggest yet, and in 2011 they were about to get a rude awakening.

M: Toy Story 3 is one of my favorite films of all time, a great ending (regardless of Toy Story 4, it’s still an ending of the “Andy arc”), and almost 10 years later, it continues to be one of their best offerings.

V: While I like the film a little less than you, I still think it’s a solid effort overall, and as you mentioned, a fitting ending to Andy’s story.

M: That’s all for today! What do you think of Toy Story 3? Let us know in the comments and don’t forget to come back for our Cars 2 review!

Toy Story 3 borrows a few too many ideas from its predecessor, but it's also features inspired performances and gorgeous animation. Its humor and heart are sure to entertain.