A few days ago, our Facebook members voted on their top 5 favourite Star Wars movies. Over 250 votes were cast to see which of these films would reign supreme in the galaxy. So, it’s time to count down the Geeks + Gamers Top 5 Star Wars movies, as voted by our community.

*Spoilers for everything Star Wars!*

1. Episode V – The Empire Strikes Back

The sequel to the 1977 phenomenon A New Hope, The Empire Strikes Back had a lot of pressure to live up to its ground-breaking predecessor and prove that Star Wars was not just a one-off sci-fi extravaganza. And it did just that. Three years after A New Hope, the Force was still strong with the series as The Empire Strikes Back dominated the box office in 1980 to become the highest grossing movie of the year. Darth Vader revealed who the daddy was in a scene that has become iconic in cinema history, and today the film is regarded by most as the best entry in the franchise, and our community agrees. The Empire Strikes Back dominated the poll with 87 votes to become Geeks + Gamers’ number one Star Wars movie.

Second and third place came down to the wire, with one vote separating the two movies. However, it was 2015’s The Force Awakens that just squeezed into second. This movie was a monster at the box office; with a worldwide total of $2,068,223,624, it crushed records and became the highest grossing film to date in the Star Wars Franchise. The Force Awakens reintroduced us to Mark Hamill as Luke Skywalker, Harrison Fords as Han Solo and the late, great Carrie Fisher as Princess Leia. Other original characters also made a comeback, and between them and some new faces like Rey and Kylo Ren, this film managed to generate nostalgia for the original trilogy and mix it with a modern-day twist. It brought together Star Wars fans new and old, and rightly deserves its place in our top 5. 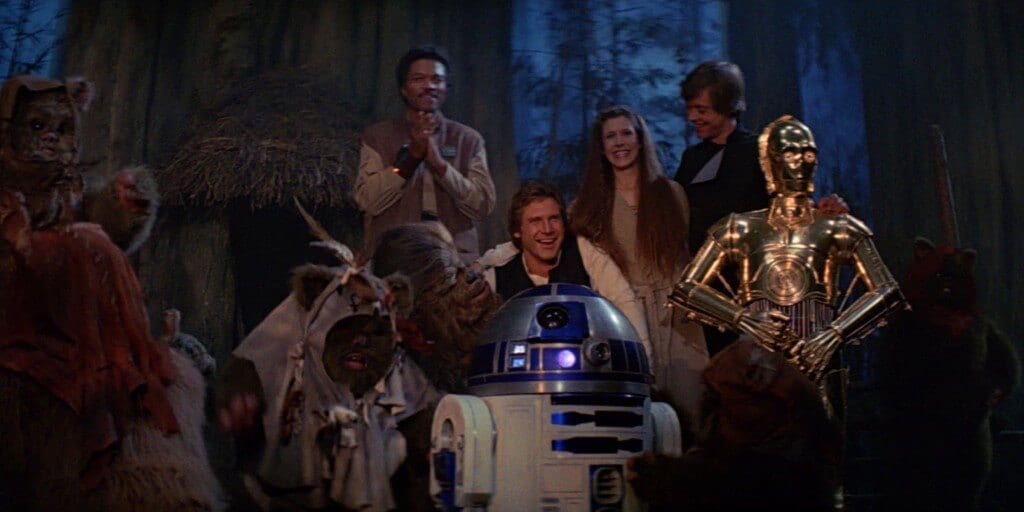 3. Episode VI – Return of the Jedi

In third place is the third film of the original trilogy. Return of the Jedi was the end of what had been an unbelievable trip to a galaxy far, far away. 1983 was the year the Jedi ruled the box office, making over $100,000,000 more than the year’s next biggest movie, Terms of Endearment. And if that’s not incredible enough, we met Ewoks for the first time! Everyone was itching to see Luke and Darth come face to face after the blockbuster “I am your father” line was dropped in Empire Strikes Back, and for the final showdown between the light and dark side of the force. Return of the Jedi was the last time we would see Star Wars on a cinema screen for 16 years, and it took another 16 years for a movie to be released that would do Return of the Jedi, along with its predecessors, justice.

4. Episode III – Revenge of the Sith

The prequel trilogy that was to follow Return of the Jedi failed to hit the sweet spot the original films did, but that’s not to say they weren’t liked at all, as Revenge of the Sith received 37 vote (not much can be said for The Phantom Menace with 10 votes, or Attack of the Clones with a sad 5). Revenge of the Sith still had something to it that fans liked, mainly the moment we saw Anakin Skywalker turn to the dark side, slay younglings and battle with his former master Obi-Wan Kanobi. We witnessed the fall of the Jedi as the Empire took control of the galaxy, Anakin transform into Darth Vader and, as with the rest of the prequel trilogy, more Yoda. To the surprise of some, Revenge of the Sith takes fourth place amongst Geeks + Gamers Top 5 Star Wars Films.

Finally, we end with the film that started it all, Star Wars: A New Hope. In 1977 George Lucas, crew and cast made cinematic history with a film nothing less than revolutionary. Star Wars proved to be a huge hit for film fans and took its place geek culture worldwide. Not only did it manage to stay in the domestic box office top 30 for the whole year without suffering a significant drop, but it saw increases within its first four weeks, and even a whopping 47.7% increase within week 13. Carrie Fisher proved to the world that a woman on screen could be sexy, smart, sophisticated, feminine and a total badass; she will be deeply missed but never forgotten. Star Wars fans owe this movie everything; it was the start of a series that would change lives across the world and the beginning of what would become the second most successful film franchise of all time.

Star Wars: The Last Jedi opens in theatres tomorrow, when we’ll continue our story from The Force Awakens with Princess Leia, Luke Skywalker, Rey, Finn, Poe and co. as they take on the First Order, led by Supreme Leader Snoke and the loathsome Kylo Ren. Get your tickets now!