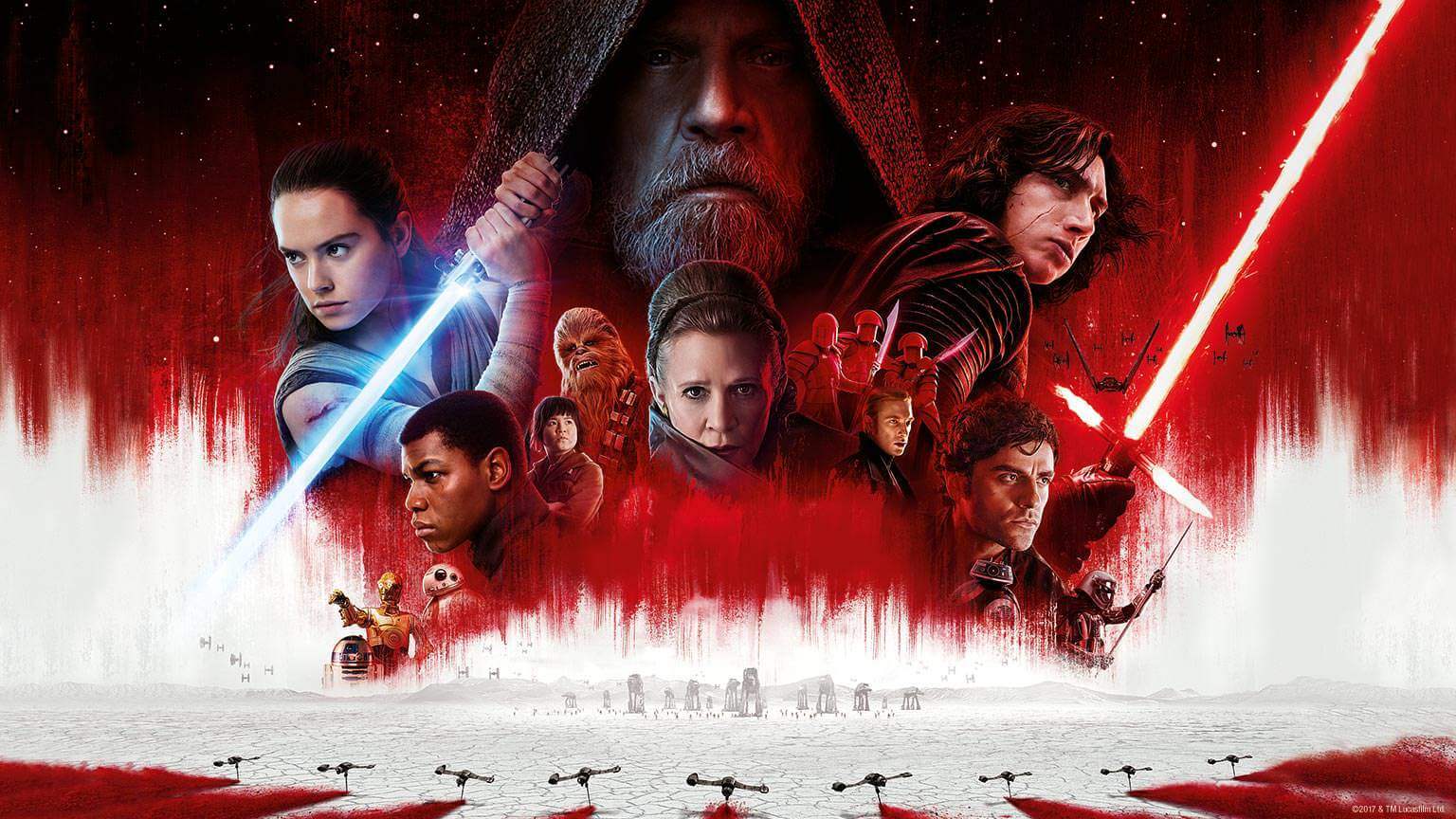 I didn’t like The Force Awakens. I hated its refusal to explain its central conflict, its misuse of – and seeming distaste for – the classic characters (one in particular), its disappointing villain, its endless dangling story threads, and, most of all, its replicating the entire plot of A New Hope. I did like the new lead characters, Rey and Finn (more for the performances than the writing) as well as the camerawork. For the most part, the fandom disagrees with me, having embraced the first in the new series of Star Wars movies, putting it on par with – even, in some baffling cases, above – the original trilogy. Well, to each his own, but the exiting of J.J. Abrams from the franchise, the promise of something other than a retread of The Empire Strikes Back and the return of Luke Skywalker managed to gin up a little bit of hope in me that this sequel would course correct as much as possible. Such is not the case; Star Wars: The Last Jedi is even worse than The Force Awakens, a movie and entry in the saga so bad it drags its predecessor down with it, surely having to diminish it in the eyes of even its most ardent supporters.

The Last Jedi begins immediately where The Force Awakens ended, with Rey handing Luke the lightsaber he lost down that shaft so many years ago. What happens next is a surprise, but not a good one, and it sets the tone for the rest of the film: forced humor, lazy attempts to make the familiar look new, a bizarre contempt for the same past they can’t stop cannibalizing, an inability to tell a worthwhile story, and absolutely nothing interesting for the protagonists to do. Any hopes that this wouldn’t be yet another retread are dashed as we watch a very boring version of The Empire Strikes Back play out on screen. They use superficial techniques to disguise this, like jumbling the order of reworked scenes or borrowing from the other two classic films as well (including a scene already ripped off in The Force Awakens; not an ounce of shame present), but once again, it’s impossible to miss. After The Last Jedi, we should all give up hope of ever seeing something new from this series.

Perhaps even worse than the pilfering of the past is the sheer boredom Episode VIII induces. Nothing much actually happens in The Last Jedi, with almost all of the major players just sitting around waiting for someone else to do something till the end. The movie cribs greedily from Empire but manages to take none of that much better film’s energy or sense of dread and danger. The main plotlines are stagnant and the subplots are unnecessary detours. Moreover, the mysteries from The Force Awakens either get really bad answers or are actually dismissed onscreen, The Last Jedi promising us that nothing that happened before, even just one movie back, meant anything. And if the movies themselves don’t care, why should we?

The characters, old and new, fare poorly. Rey and Finn feel like they have nothing to do, with Rey wandering around a barren cave planet while Finn embarks on a seemingly useless spy mission that goes on far too long and feels out of place in the plot; Daisy Ridley and John Boyega seem disinterested in their roles this time, and it’s hard to blame them. Poe – whose last-minute survival in The Force Awakens was a mistake that detracted from his sacrifice and Finn’s arc – makes use of his new lease on cinematic life by being a useless lunkhead for the entirety of the movie, causing trouble for the Rebels (or the Resistance, or whatever) at every turn. Kylo Ren continues to be a Darth Vader wannabe whose purpose seems to be to point out that no one will ever live up to the legendary villain of the original trilogy, making one wonder why we should be anything but annoyed by his presence. A couple of new characters, Rose Tico and Admiral Holdo, are not only lousy in their own right, but perform (not very interesting) functions that would have been better left to Leia and Poe, so that established characters could be fleshed out and given proper arcs. But the most disappointing of all is Luke Skywalker; as Han Solo was made a fool of in The Force Awakens, so is Luke in The Last Jedi, and while Mark Hamill admirably does all he can with what he’s given, his depiction here showcases a clear misunderstanding of one of film’s greatest heroes.

On a technical level, The Last Jedi is just kind of there; inoffensive (they saved that for the writing), but unspectacular. The Force Awakens at least tried to add some interesting visual touches, like filming the Stormtroopers in a militaristic fashion to play up their fascistic nature as they laid waste to a defenseless camp. The Last Jedi is lifeless in that regard, its only noteworthy shots memorable for their striking resemblances to ones from the first three movies. John Williams’ score hits the requisite familiar beats, but that’s about it; ditto the sound effects. The special effects are a mixed bag; the crystalized cat creatures from one of the more recent trailers are gorgeous, with lovely attention to detail that makes you wish they were in the movie longer, while the much-ballyhooed Porgs look terrible, like cartoons walking around with the actors. Other creatures succeed and fail at a more or less even rate. What was once a series known for its myriad inspired alien creations is now coal to be mined for the occasional jewel.

The Last Jedi is a mess, atrocious from a storytelling perspective and a middling effort aesthetically. The characters are pale shadows of what they were, and in some cases could have been, while the dull as dishwater plot lies comatose, almost daring the audience to take a bathroom break and see if they’re lost upon return. When it’s all over, it’s hard to care what happens next, and the notion that a finish to the story might be better left unfilmed creeps into the mind. We deserved better, Luke Skywalker deserved better, and Star Wars deserved better.

The Last Jedi is a mess, atrocious from a storytelling perspective and a middling effort aesthetically. The characters are pale shadows of what they were, and in some cases could have been, while the dull as dishwater plot lies comatose, almost daring the audience to take a bathroom break and see if they’re lost upon return. When it’s all over, it’s hard to care what happens next, and the notion that a finish to the story might be better left unfilmed creeps into the mind.