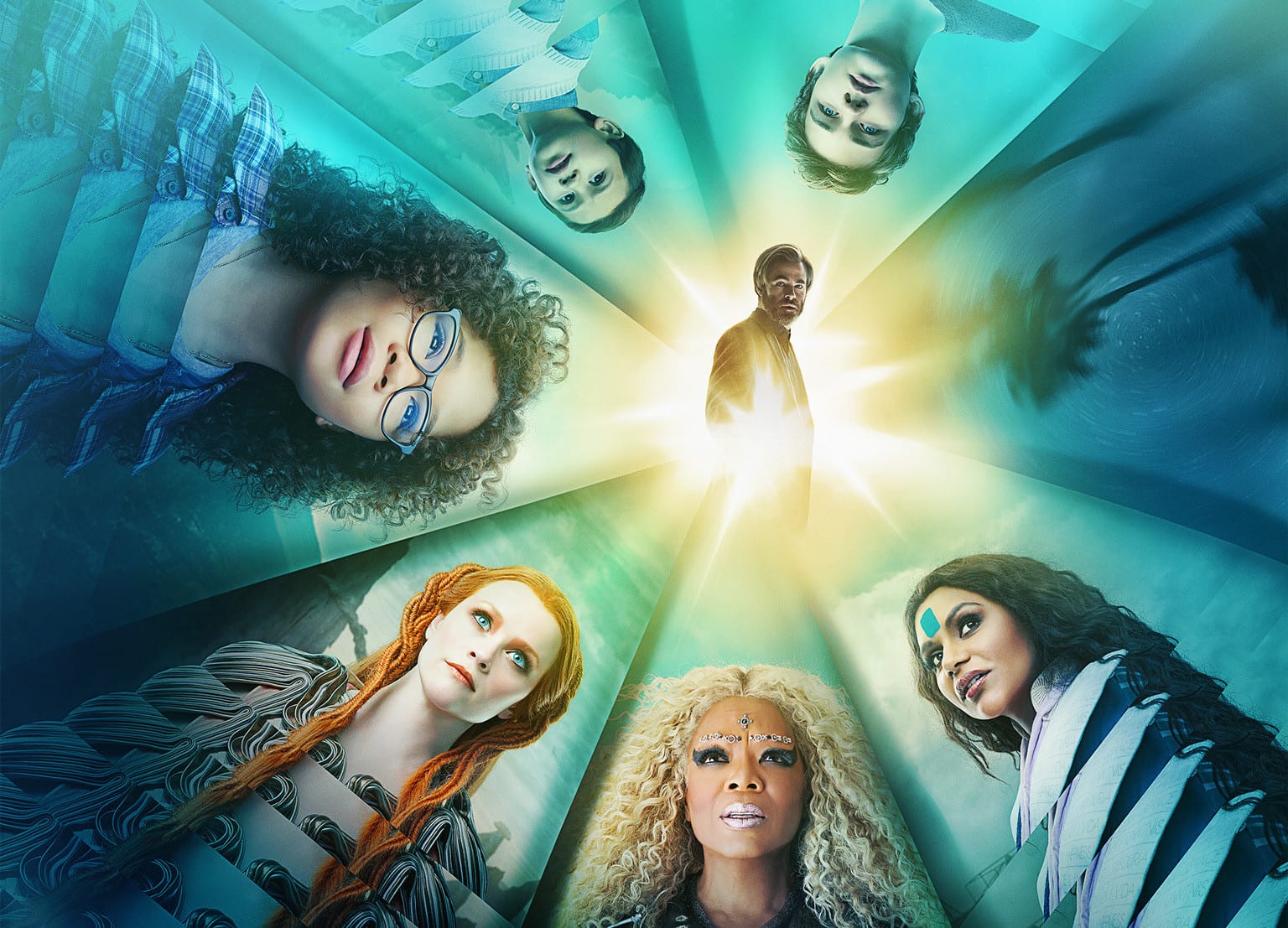 Remember that moment in Wonder Woman where, as she’s facing down Ares with fire blazing around her, she confidently proclaims to him and the world, “I believe in love,” and instead of coming off as cheesy or phony, it just works? That’s because the filmmakers believe that sentiment wholeheartedly, and we believe in our heart that Diana believes it as well, and at the end of the day, it is love that unites us and love that can save the world. It sounds corny, but in execution it feels like a necessary message that we all need to hear. And with Disney’s A Wrinkle in Time, Ava Duverney injects the film with that sentiment as well, and in return we get a movie that feels unapologetically sentimental, unafraid to portray genuine feeling on screen. It’s a welcome change of pace from those studio movies that are like adolescent boys afraid of their feelings, trying to play off their emotional confessions with a stupid joke or two.

A Wrinkle in Time refuses to play that game, and instead we are given a character who, throughout the course of the movie, learns not only to love those around her, but comes to understand what it means to love herself, to see herself as beautiful and gain a confidence in her identity. This will be a movie that connects with younger audiences, particularly younger women and women of color, for that very reason, because while we may ignore or shrug off these things in our everyday real life, sometimes we do need our art and entertainment to tell us something we need to hear in order to feel whole, in a sense, as if the specificity of our existence means something. Not in that existential meaning of life sort of way, but that we matter to those around us, and that we matter to ourselves, that we deserve to exist. And there is a profound beauty in the message that this film relays. 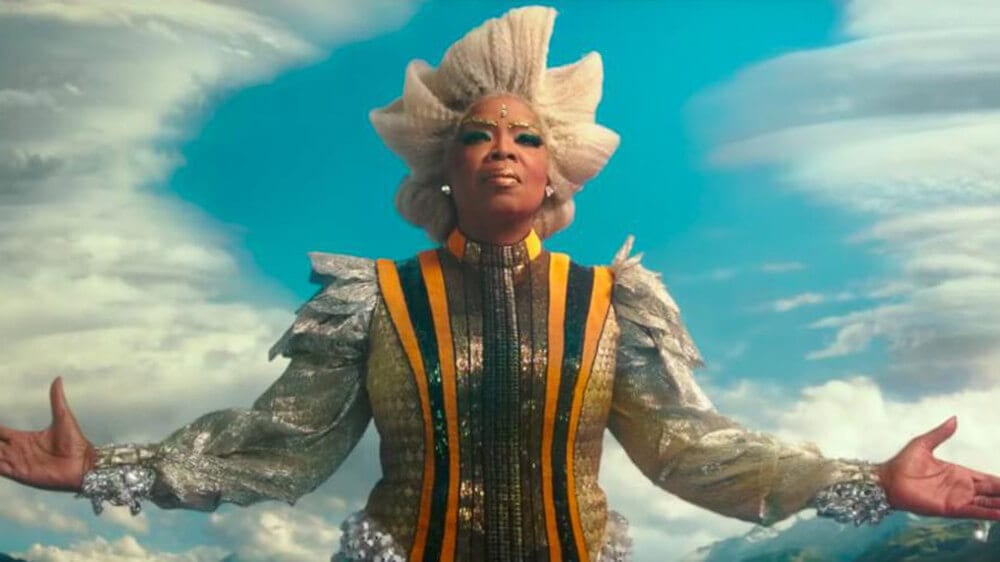 Unfortunately, in spite of its noble intentions, A Wrinkle in Time just never kicks into gear and takes off, instead getting bogged down by the laser-tight focus on the narrative, never allowing itself to just explore these interesting worlds in a way that creates a tangible connection between them and us. What we have is a film that feels tossed together like a Jackson Pollock knockoff, messy and fragmented with a bunch of colors thrown on the canvas without any conceivable idea of what to make of them.

Boiled down to its most simplistic terms, A Wrinkle in Time, based on the bestselling novel, tells the story of Meg Murry (played by Storm Reid in a breakout performance) and her search for her father, who went missing exactly four yeas ago. With the help of her genius younger brother Charles Wallace and friend from school Calvin, along with three intergalactic warriors (played by Reese Witherspoon, Mindy Kaling and Oprah), they go on a quest through the galaxy in search of him, visiting different worlds and meeting unique characters. Sounds cool, right? The problem arises in the actual execution, where these three intergalactic warriors are barely in the movie, and the worlds we explore aren’t really explored because God forbid we chill for a second and just hang out. But nope; instead, Ava Duverney was so concerned with the actual narrative and the search for her father that the fact that these worlds exist ultimately feels pointless. It’s just a lot of CG puked up on screen without ever, for one second, providing a tangible grasp of what we’re watching. Even when we’re hanging out on Earth it feels phoned in. Ava creates such a weird dichotomy with this concoction, crafting a film whose central core and ideas are empowering and resonate, yet the world surrounding it feels fraudulent.

Then again, what this film does very well is give us specific character relationships that feel whole, and through these relationships we garner character growth that provides this film with its soul. Even though Meg and her father (Chris Pine) barely share any screen time together before his disappearance, the small moment or two they do share provides the emotional core for the rest of the film, and we not only understand their dynamic, but once Pine is gone we come to understand her insecurities as a middle school black girl, and how his presence in her life provided stability. Without him nothing makes sense, and we feel her pain. There is a moment in this film where Meg announces that she hates herself most of the time, and that line stings, not only because of the delivery from Storm Reid, but also because we’ve seen that conflict within her from the beginning, and her words just make it all the more concrete. I think what this film gets absolutely right is the characterization of Meg Murry, and the way her interpersonal relationships play out with Calvin, her younger brother, and, ultimately, her father. Gugu Mbatha-Raw plays her mother, and that feels like a throwaway part, as she isn’t give much of a character. However, she does make the most of what she has. 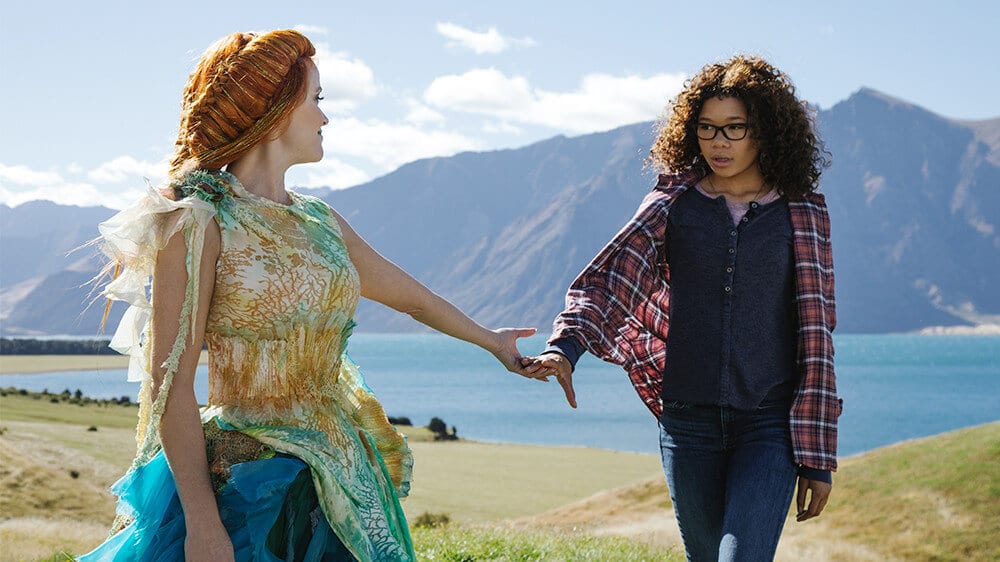 Ava Duverney, unfortunately, was not the right fit for this adaptation, simply because she was afraid to get a little more experimental, and afraid to take this film into weirder, offbeat directions, which is what was missing. Maybe she wasn’t allotted the amount of time she needed to tell this story, because the narrative feels rushed, moving without observing, more enamored with the mystery than the wonderment of exploration. For a movie about exploring the unknown, and unlocking secret keys throughout the universe, it’s pretty tame in the manner in which it presents these ideas. Its unimaginative and basic in its presentation, which is the wrong approach to source material that’s this out there.

A Wrinkle in Time is a film that will connect with a specific audience, and I love the fact that it exists because it will allow young girls to see themselves on screen, and its underlying themes of acceptance and learning to love yourself and those around you are truly empowering ideas that movies are afraid to explore because of their fear of being perceived as cheesy. And Storm Reid turns in a quietly empowering, nuanced performance, illuminating Meg’s struggle and charting her journey in a fashion that feels earned. So yes, bravo to A Wrinkle in Time for merely existing, and it will find its audience. But from a personal perspective, it just didn’t know what to do with the source material, and the movie focused on the wrong things. The central theme resonates, but the sense of wonder and excitement is severely lacking.

A Wrinkle in Time

However noble its intentions may be, Disney's A Wrinkle In Time is simply too unimaginative and simplistic to truly capitalize on the offbeat source material