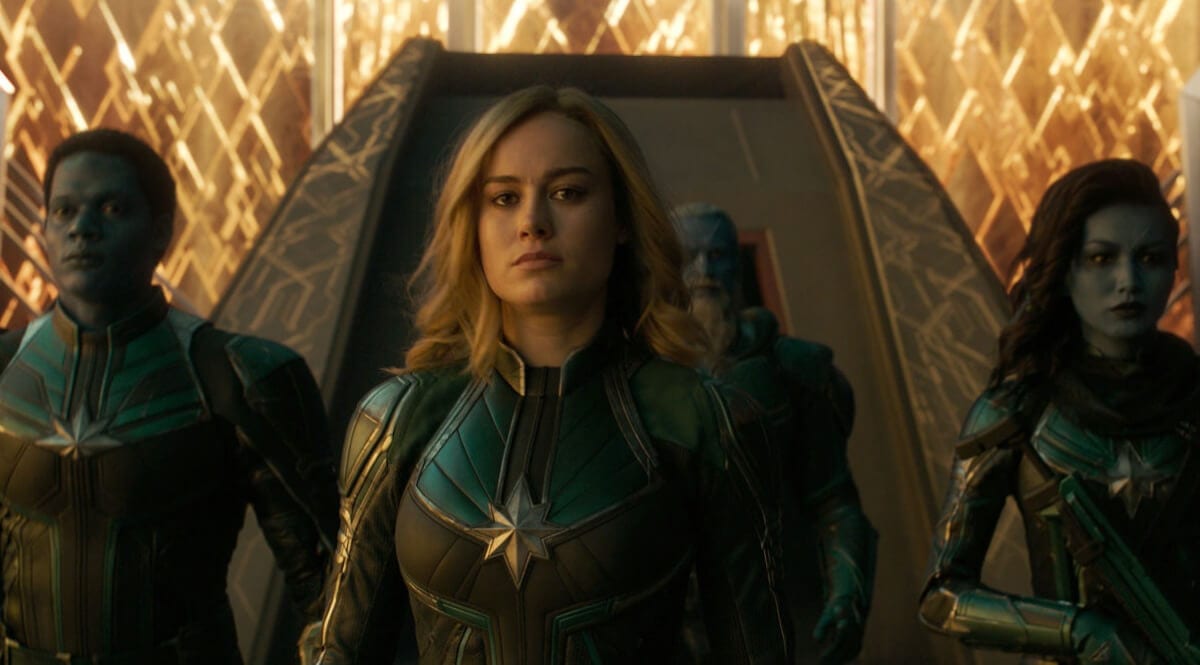 Here we are with another entry in the Marvel Cinematic Universe. Following the events of Avengers: Infinity War, MCU fans are impatiently waiting to see what happens next. Before we get to Avengers: Endgame, our last stop is introducing Captain Marvel. During the post-credit scene for Infinity War, we saw Nick Fury make contact with Captain Marvel before eventually falling victim to Thanos. Questions immediately popped up about how strong she would be and how she would help the other Avengers win this war. Captain Marvel gives us those answers. Debuting a new superhero for this massive universe is hard enough on its own, but having to convince an audience that this hero deserves to be a major player in the universe’s biggest fight puts a lot of pressure on Marvel to deliver. Captain Marvel doesn’t reach the heights that Marvel intended it to, but it’s still an enjoyable experience.

Captain Marvel follows Carol Danvers, a Kree soldier caught up in a war with the Skrulls. After a mission gone bad, she ends up on Earth, where she has to stop the Skrulls from obtaining powerful technology. While on Earth, she uncovers secrets from her past that lead her to make difficult decisions about the person she is and the person she wants to be.

Admittedly, I was a bit skeptical about this movie. The trailers led me to believe that this could be another bland entry in the MCU. I’m glad that isn’t the case. Captain Marvel excels in the typical things that people look for in blockbuster movies. The action is enjoyable, and the humor hits a lot more than it misses. Highlighting outdated technology from the 90s works for plenty of laughs during its runtime. It also helps to have a colorful portrayal of young Nick Fury from Samuel L. Jackson to play off the more stoic Carol Danvers. This is the most time we spend with Nick Fury in any MCU film, and it’s a treat the entire way through.

Brie Larson’s portrayal of Captain Marvel is a bit confusing. She’s a very talented actress who works best in roles where she has to dig deep for emotion. Her performances in movies like Room and Short Term 12 prove that this is her comfort zone. It’s odd to see someone like Larson be stone-faced for almost an entire film. Considering that this is a big departure from her usual roles, I thought she did great. There are moments where that emotional wall does start to crack and Larson really gets to perform. There’s also amusing banter with her and Nick Fury that help solidify a believable friendship between the two. Their dynamic is easily the best part of the film. 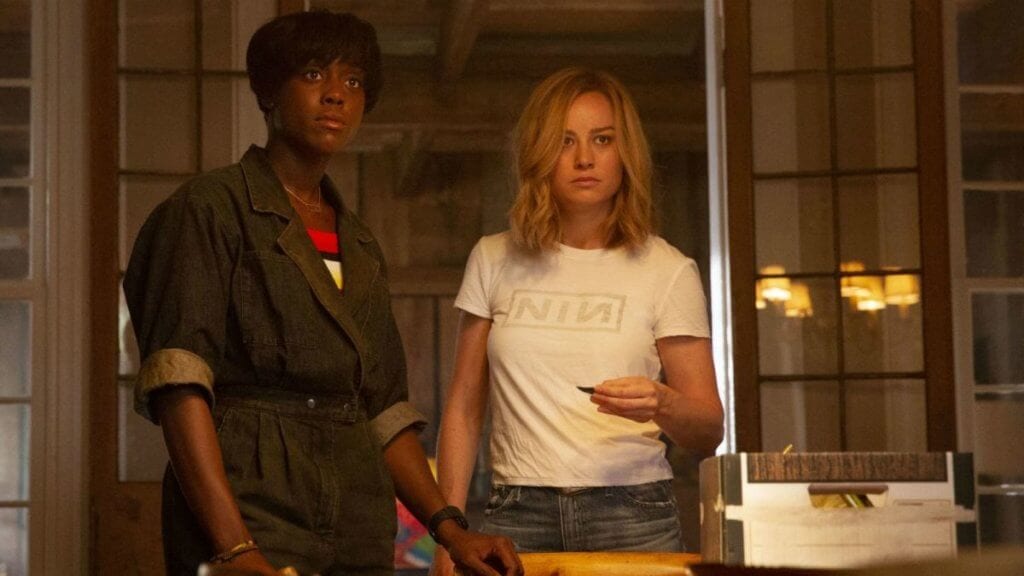 The plot of Captain Marvel is pretty simple. This is your usual story about a main character who doesn’t know who she is and finds clues to her past as the movie progresses. There is a small twist in the film that isn’t a surprise; I’m actually not sure if they were even trying to swerve the audience, considering everything we know about the Kree. This doesn’t stop the context behind the twist from being emotionally impactful, though.

I did not expect to like Ben Mendelsohn’s Talos. At first glance, there’s nothing special about the character. Once he’s given the opportunity to explain his motivations, it becomes clear that there’s much more to him. I love how Mendelsohn was able to make me feel the emotional weight of Talos’ problems. He’s also responsible for some of the most hilarious moments in the movie. My favorite joke is when Talos tries to explain that he’s not a threat to Captain Marvel and her friends. 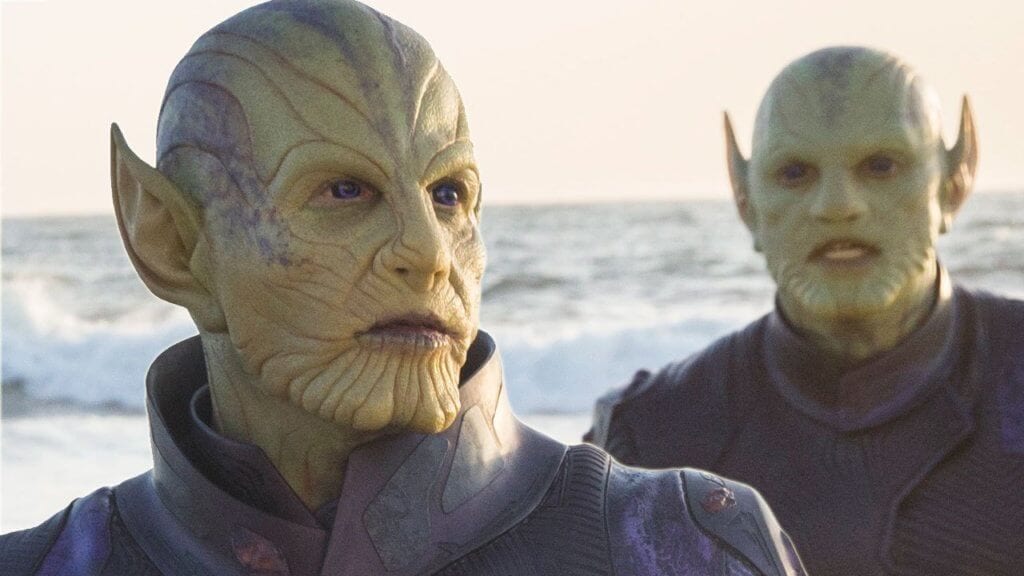 I was also a fan of the music in Captain Marvel. They really tried to capture the 90s in every way they could, and that extends to its soundtrack.  There are some songs that I couldn’t recognize immediately, but I’ll give them credit for using TLC’s “Waterfalls” during one of the scene transitions. The score is also pretty good. I’m a big fan of the main theme of the movie. It plays as this futuristic military anthem that stands out a lot more than other generic themes in the MCU.

The directing in Captain Marvel is a disappointment. I mentioned the confusion with the Captain Marvel character, but it extends past that. Some of the camera shots don’t make any sense. Having Samuel L. Jackson in camera for an action sequence looks ridiculous. Some of the smaller hand-to-hand fights also have an abnormal amount of cuts. The action is more enjoyable when CGI is involved; everything looks a lot cleaner and flows better. The ending fight, where Captain Marvel really starts to explore her powers, is genuinely exciting and cool to watch. She is ridiculously strong and can do some impressive things.

By extension, the script also had some issues. I enjoyed a lot of it, but there are some dialogue choices that just don’t feel organic. This is especially true at the beginning of the movie with Carol and the other Kree soldiers. I also don’t understand why there is so much of an emphasis on Goose the cat. I thought the gag lasted too long. By the time Goose actually did something, I didn’t care. The story itself raises some questions about the MCU timeline as well. It doesn’t create any inconsistencies, but they don’t give specifics about how certain items were obtained.

Captain Marvel is a good movie that feels like it was held back from being great. Minor changes on all fronts could’ve gone a long way toward solidifying this as a big step forward for the MCU. What we ended up getting is a perfectly enjoyable movie that is carried mostly by its talented cast. It may not be the game-changing experience that Marvel intended it to be, but it’s far from the worst thing the MCU has put out, and I suggest people go to the theater and watch it.

Captain Marvel is a worth entry in the MCU. Its talented cast delivers a perfectly enjoyable movie, despite being held back by lackluster direction and an inconsistent script.