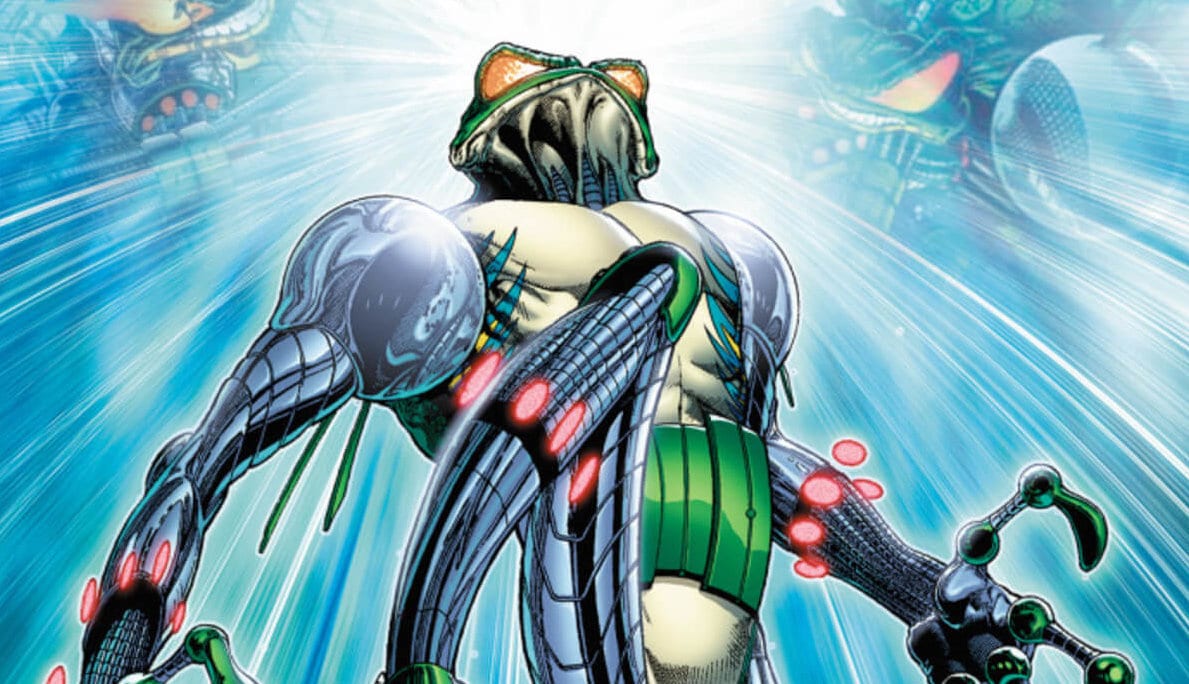 Ethan Van Sciver is far from a new face to comics. Having teamed up with multiple writers throughout his 26 years in the industry, he’s worked on the most prominent characters that the medium has to offer. Some of the very best, and my favorite, comics for a given character have been penciled by Van Sciver, including Green Lantern: Rebirth, Flash: Rebirth, Superman/Batman: Enemies Among Us, and more. Suffice it to say, I’ve been familiar with “Uncle E’s” superhero work for some time. However, I’d never heard of, or read a Cyberfrog comic prior to his announcement for the crowd-backed Indiegogo campaign that was Cyberfrog: Bloodhoney. The campaign shattered crowd-funded comic book records, surpassing even other largely successful projects that were funding around the same time by leaps and bounds. The initial idea was for a roughly 48-page book that would tell the story of what the creator-owned character’s next adventure would be and the events leading up to Bloodhoney, as well as reveal the real purpose behind his existence. That 48-page number would increase more than half again in size by the time Ethan had completed work on it. That was one of several factors that resulted in a nearly-one-year delay in fulfillment of the book from the initial estimated date to when backers finally began receiving their precious books. So, the foremost question is, was Cyberfrog: Bloodhoney worth the wait?

It necessitated only holding the weighty, chromium-covered book and a once-over at the visuals contained within to croak a resounding “Yes.” Having already been familiar with Mr. AllCAPS’s work, from his earliest panels on Impulse to his final pages on Hal Jordan and the Green Lanterns, I knew that I should expect, at a bare minimum, a great-looking book from cover to cover. Saying that this book “looks great” is a disservice to it; there’s nothing that I can say, in good conscience, that is negative about the art. Even things that aren’t ordinarily his strong suit, such as his females, have markedly improved over the years, and Heather Swain was a stunning bombshell (as any female comic character born of the ’90s ought to be). The level of detail put into every panel is nothing short of astounding (it’s no wonder the thing was nearly a year late considering how much detail is here). Bloodhoney is, without pause, Ethan Van Sciver at the top of his game, and it puts to shame even his most credible and iconic work at DC. Cyberfrog himself has evolved, just as Ethan has as an artist, over the years, and his more intricate and anatomy-conscious design is a testament to the amount of work he put into studying just how the character should look when standing, sitting, perching, and leaping. Cyberfrog’s movements and facial expressions are dynamic as hell and add to him as a character. Kyle Ritter’s colors complement Ethan’s pencils and further augment the quality of the art as a whole. Kyle is a savant with the visible spectrum, and the vibrancy that his digital brush brings makes the work pop. I’d love to see what Ethan’s initial run on Cyberfrog would look like remastered with Ritter’s colors. Simply put, Cyberfrog: Bloodhoney is breathtaking and a visual masterpiece. Both Ethan and Kyle should be immensely proud of the work they created. Something that might otherwise go underappreciated is the lettering by Somni. The flashy and intricate letters and dialogue bubbles that envelop them look and feel both sci-fi and primal. 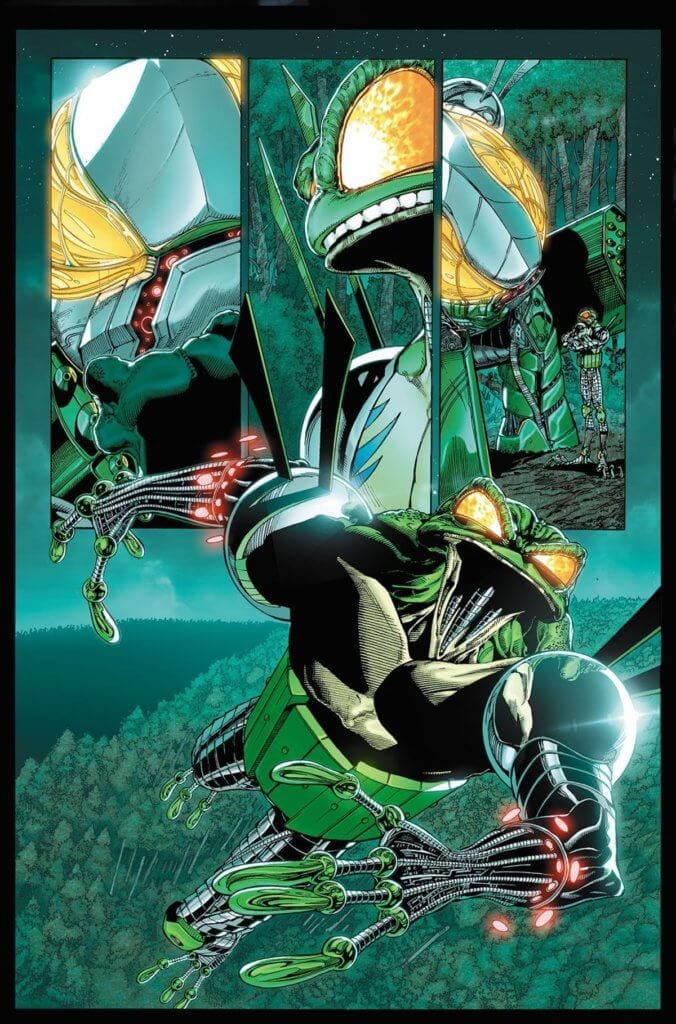 Let’s be real here; the art was never going to be in question. Anyone with even the most surface-level familiarity with Van Sciver’s work knew it was going to be beautiful. The real issue was always going to be whether or not Ethan possessed the ability to tell an engaging story, and he succeeded in that regard. From the outset, this is a comic that is a product of the ‘90s, and let me make this crystal clear: that is a good thing. Cyberfrog: Bloodhoney is not some mind-bending, introspective, character deconstruction narrative that’s going to make you question your life existentially (or fall asleep). It’s a monster book, an action book, and in some ways, a horror book. That being said, it would be both unfair and inaccurate to claim the story is non-existent or even mere surface-level stuff. There is, quite evidently, a lot of setup here for the next books. Ethan was planting the seeds of things to come, and there’s a lot to be said for that. However, and not to put too fine a point on it, the now does not suffer for it. Given that this is at least a trilogy, with each new book picking up where the last left off, one can surmise that the complete tale will elevate its individual parts.

As stated prior, I’d never even heard of Cyberfrog before the Indiegogo campaign, and therefore my expectations and predispositions were based wholly and solely on what information Ethan shared in his YouTube live streams. Even if only for frame of reference to new potential fans, Ethan described Cyberfrog as sharing similarities with the Teenage Mutant Ninja Turtles. And, honestly? That was enough to get me on board; I ate, lived, and breathed TMNT as a kid. That set the tone for the type of story I thought I could expect in terms of content and depth, as well as overall fun and entertainment value. These expectations were both met and exceeded in Cyberfrog: Bloodhoney. The setup, which served as the opening act of the book, was instrumental in familiarizing me with the characters and their purpose, as well as how they interact with one another. This painted Trikk Rhan’s (Cyberfrog) and Dadurahn Rahn’s (Salamandroid) origins, objectives, and motivations with just enough detail so as not to dwell on them for too long. Their mother, Kjell Sinn, came to our planet with the purpose of adding her biotech to a young human. Her goal was to create a protector of Earth from the future threat of the Vyzpzz, a race of gigantic alien wasps (yup, I’m out) that convert the insides of other living beings into “bloodhoney” so that they can be harvested for their offspring. This process is shown in horrifically great detail at one point in the book. Without enough time to locate a human for the procedure, Kjell Sinn instead chooses a nearby frog and salamander, and thus Cyberfrog and Salamandroid were born. Cyberfrog is the main hero tasked with protecting the Earth and all life on it, while Salamandroid is meant to be his brother’s enforcer, his lethal protector. 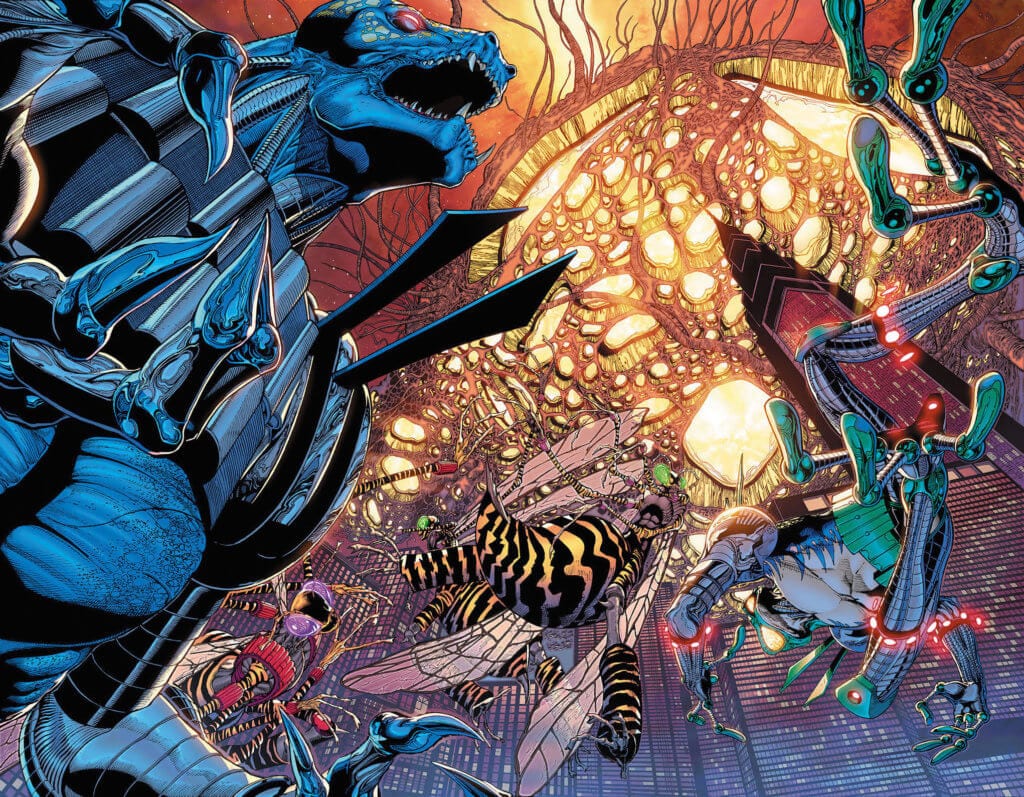 Stories, for me, should first and foremost be character-driven. I always say that world events themselves cannot necessarily be altered or avoided, but how individuals respond to those events can be. And it’s difficult not to like the cast here. Any given pair of characters has a different dynamic. Cyberfrog (or “Froggie,” as Heather calls him) and Heather Swain have one of those rare, platonic friendships that provide both of them with someone to lean on and receive encouragement from. In fact, their friendship reminds me, in a number of ways, of some of my own, and that is what draws the reader in – something to identify with, not a surface characteristic but rather from within. On the other hand, you have Cyberfrog and his brother Salamandroid. These two act like big brother and little brother, both in how they look after one another (which falls in line with the latter’s function) and in how they banter.

Once all of the setup is over, and the stage has been set for the Vyzpzz invasion, the book’s tone changes, and we get to see some seriously gruesome stuff. Then, just as things look like they’re about to ramp up, the third act ends. “Disappointing” isn’t the right word for this, because it wasn’t; in fact, it made me want book two all the more. I was left with a cliffhanger ending that made me throw my hands up in the air in frustration at unanswered questions and the onslaught of more. The cliffhanger wound up being two-fold in purpose: it built up more than sufficient anticipation for the next book, and it ensured that I received this one before next Christmas. All jesting aside, Cyberfrog: Bloodhoney blends the things that I value most in comics: gorgeous artwork from cover to cover and an engaging story that is driven by exciting characters. The story will no doubt increase in depth with each subsequent book, but what’s ultimately important is that Cyberfrog: Bloodhoney leaped off the pages at me with a strong hook, and I want more.

Cyberfrog: Bloodhoney blends the things that I value most in comics: gorgeous artwork from cover to cover, and an engaging story that is driven by exciting characters. The story will no doubt increase in depth with each subsequent book, but what’s ultimately important is that Cyberfrog: Bloodhoney leaped off the pages at me with a strong hook, and I want more.