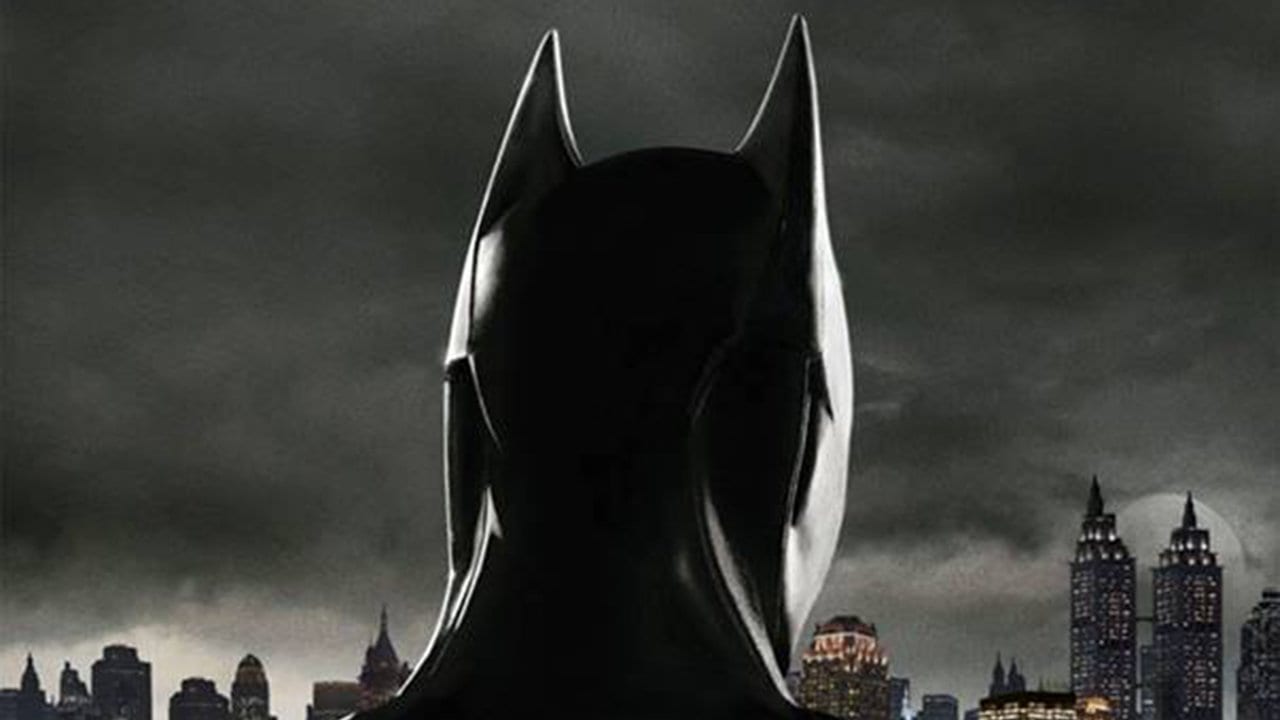 Last week, Bane was beaten, Batgirl got a name, and Bruce set off for parts unknown. This week’s episode, “The Beginning…” represents the fulfillment of a long-held promise: when Gotham aired its final episode, Bruce would don the cape. While it was initially believed that the moment wouldn’t occur until the very last scene, it turns out that producer/director Danny Cannon, episode director Rob Bailey, and writer John Stephens had one last surprise for us in the form of what Cannon referred to as a “Batman pilot” for the series finale. Ever since, I’ve been waiting for this episode, and I couldn’t wait to see what they’ve brought us on this, our final trip to Gotham.

“The Beginning…” opens with Bruce writing to Alfred to let him know he’s OK in a scene reminiscent of Batman Begins. It then cut to ten years later, when Penguin is about to finish a ten-year prison sentence. Bruce is returning to Gotham for the opening of the new Wayne Tower, and Gordon, sporting a mustache, is explaining to Mayor James why he needs to step down while the latter tries to convince him of the opposite. I also have to mention how happy I was to see that James’s portrayer, Spin City alum Richard Kind, return in this episode, thus helping to bring the show full circle, as he was in the pilot five years ago. He wasn’t able to do that on his previous series just before Gotham, the short-lived Golden Boy, so I’m thrilled he got a bit of a redemption career-wise here. After James convinces him to stay at least until after Wayne Tower opens, we get to see a glimpse of Gordon’s life as a father co-parenting our future Batgirl.

Unfortunately, Gordon isn’t the only one who’s wrestling with the release and return of Penguin and Bruce, respectively, as Riddler – who’s also been locked up – catches a glimpse of a guard’s newspaper. While this does feel a bit contrived, I suppose it’ll do to set up the episode’s plot. After all, this scene also serves to show us that Jeremiah is still revered (or is it feared) amongst the criminals, as Riddler tells an inmate to not mess with the supposedly catatonic villain before the former CSI is set loose on the city once again. After we briefly visit Lee and Gordon (who has now decided the mustache doesn’t suit him), there is an awkward transition to the new Selena (now played by Lili Simmons), who is busy stealing a diamond. We then get our first of several moments in “The Beginning…” where Batman is watching from the shadows. When Harvey is framed for murder, Gordon talks to his old partner about what happened and, in what is a callback to the early episodes of the show, tells him to let it go. Then in contrast to how it would have played out early on, everybody in the precinct stands behind Gordon and Harvey as they try to figure out what’s happening. 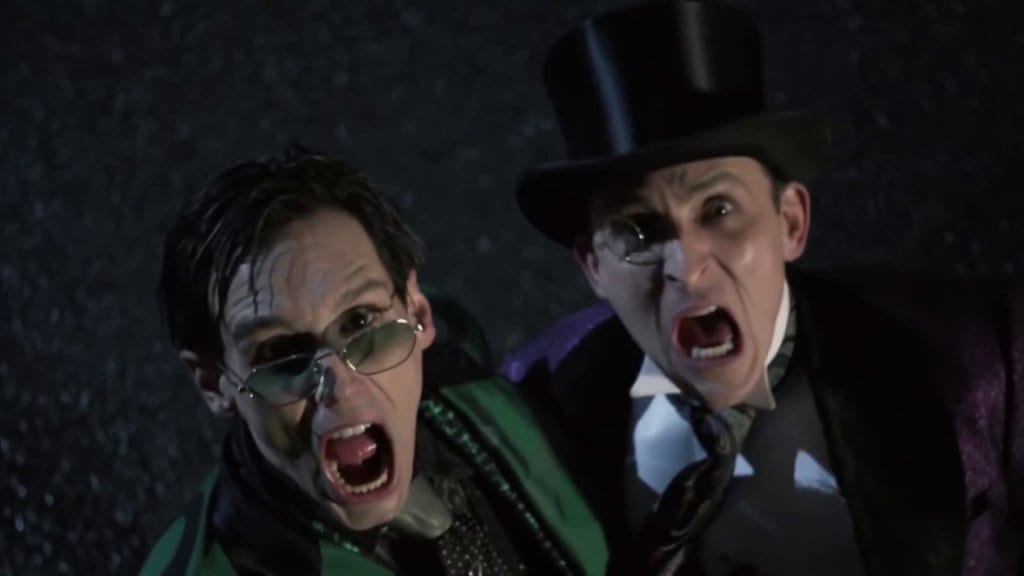 While Riddler gets some  C4 to help “remind the people of Gotham who is he is” courtesy of a just-released Penguin (or so he is led to believe), Gordon’s mission to help Harvey leads him to his first encounter with the Dark Knight. After discovering that Batman is trying to help, Gordon gets into his car, only to find Penguin in the backseat, telling him to drive back to the docks where it all began. In the course of their final scene together, Gordon figures out Penguin’s a scapegoat and dives into the water. At the party for the opening of Wayne Tower, Selena questions Alfred about where Bruce is; then she helps Barbara take out the Riddler, who has Mayor James once again strapped to a bomb (“It’s a callback,” Riddler tells Barbara). Gordon bursts in, ordering an evacuation, and quickly finds the C4 under the model of Bruce’s new Gotham. Once Gordon and Co defuse the bomb – in what I feel is a rather vanilla sequence – Gordon figures out that Jeremiah is behind everything via a model of the old clock tower Jeremiah had blown up, and goes to help Harvey, who is being transferred to Blackgate, lest he unleash Jeremiah’s wrath.

Despite Harvey’s urging to the contrary, he says Jeremiah’s name, which triggers the guards. Although Harvey and Gordon subdue him, they quickly discover he is miked, which sends Ecco to tell Jeremiah that his cover is blown. As Jeremiah laughs, it is revealed that Lucius and Alfred know what Bruce’s plans are as they look at Batman’s latest capture: Penguin and Riddler. Meanwhile, Barbara heads to her old club to get a gun, only to run into Jeremiah and Ecco. After the latter is killed in a rather gruesome manner, Jeremiah kidnaps Barbra Lee and tells her mother that Gordon must go back to where the villain was reborn, aka Ace Chemicals. When Gordon gets there, Jeremiah, who says he continued pretending while waiting for Bruce to come back, nearly kills them both, but they’re saved by our Caped Crusader.

The final scenes of the series are where I feel “The Beginning…” falters the most. After Selena and Bruce briefly talk (her back to him during the conversation), Penguin and Riddler escape again. Then Gordon, Harvey, and Alfred light the signal from last season and essentially replay the scenes with Bruce and Gordon from that finale, only this time Alfred is the one speaking Gordon’s words from the pilot. As they light the Bat Signal, they look up, and the camera zooms in on Batman, who is on a nearby rooftop. With that, Gotham comes to a close. 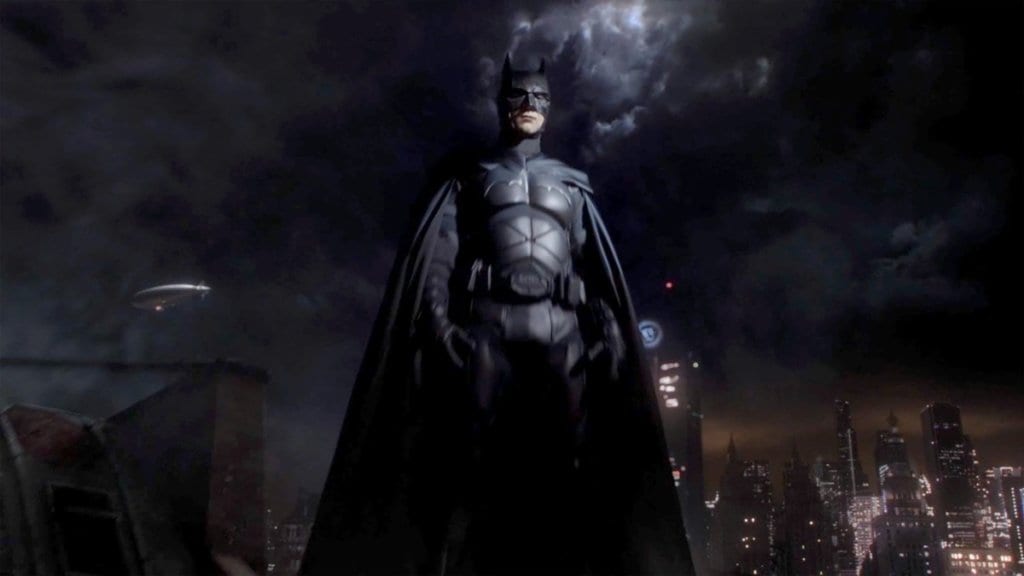 There’s a lot to love about “The Beginning…” however, it does have its flaws. Stephens wrote a pretty good capper to the series, particularly the use of the Dark Knight, with whom Bailey does a great job. You can tell they put a lot of thought into these scenes. That being said, Bruce has very much become a co-lead in the series, and while this finale reflects the original conceit of Gotham, which was only supposed to be about Gordon’s early days at the GCPD and the rogues’ gallery, I feel as though it was not reflective of the series’ evolution. Yes, it may make sense to mythologize Bruce a bit, but there really should have been at least one scene between Bruce and Gordon to speak to the relationship they’ve built over the years. Still, everybody brings their A-game to the finale, particularly Robin Lord Taylor, Cory Michael Smith, Cameron Monaghan (particularly with the nods to The Dark Knight Returns and, to an extent, The Killing Joke), and of course, Ben McKenzie. Special mention must also be given to the Lili Simmons. She doesn’t have a lot to do, but she’s extremely effective as an adult version of Camren Bicondova’s iteration of Selina Kyle, and I wish she had more time in the role.

Ultimately, Gotham was not a perfect show, yet for any fan of the DC Universe, it’s hard not to argue that it did its job. While I wish Bruce had a bit more to do outside of the cape in this final outing, McKenzie and company did a great job of honoring their characters, and I can’t wait to see what this cast does next. As for the creators of Gotham, despite some bumps in the road, they should be proud of their work on this heady brew of comic book camp and police procedural. Now, onward to Pennyworth.

There’s a lot to love about "The Beginning..." however, it does have its flaws. Stephens wrote a pretty good capper to the series, particularly the use of the Dark Knight, with whom Bailey does a great job. While I wish Bruce had a bit more to do outside of the cape in this final outing, McKenzie and company did a great job of honoring their characters, and I can’t wait to see what this cast does next.