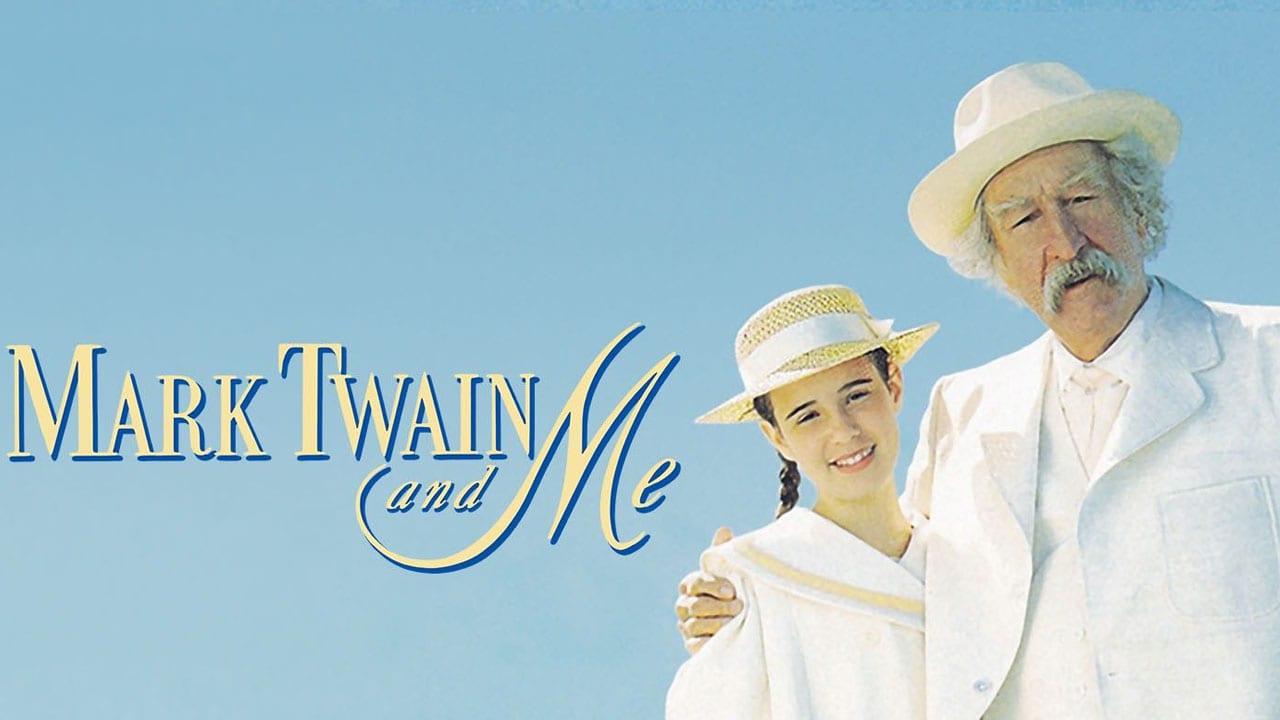 It’s pretty rare that I find something random to watch. I tend to gravitate towards sci-fi, fantasy, or anything animated. Lately, I’ve had more free time, which has led me to watch some movies and series I otherwise probably would have skipped. A perfect example of this came the other night when I was looking for The Wild on Disney+. They did have it, but it was one of the suggestions that came up with it that caught my eye. Mark Twain and Me is a movie I’d never heard of, but it looked interesting if nothing else.  The description sounded like a Hallmark movie, and, in my experience, the majority of Disney’s live-action output is best left unmentioned. But I couldn’t help being curious, so I checked it out. Let’s find out if this is yet another hidden gem lost to time or just a dud that should remain in obscurity.

Mark Twain and Me tells the true story of the friendship between the famous author and a young girl. Dorothy Quick and her mother are on a ship taking them home when Dorothy encounters her favorite author and personal hero, Mark Twain. The aging scribe takes an instant liking to the girl he will come to call “little rat.” The closeness between the odd pair frustrates Twain’s adult daughter Jean, who feels neglected by him. However, Dorothy’s influence brings life back into their home and brings father and daughter closer than ever before. When one final tragedy strikes the elderly widower, it’s up to Dorothy to comfort him.

Talia Shire is the only performer in Mark Twain and Me that I was already familiar with. She plays Twain’s spinster daughter Jean, and she’s just as good as you’d expect. Her interactions with her father are some of the best the film has to offer. Amy Stewart is also pretty good as Dorothy. This isn’t one of the best child actor performances I’ve seen, but any decent acting from a kid is a win in my book. Jason Robards is eccentric and endearing as Twain – or “SLC,” as Dorothy calls him, the initials of his real name. Fiona Reid plays Dorothy’s mother, and she serves her limited purpose. She’s not spectacular or anything, but this isn’t a particularly challenging role anyway. R. H. Thompson plays Albert Paine, a biographer shadowing Twain. They have some interesting back-and-forth, and I really liked the scene in which Twain tells him about his regrets regarding parenthood. Mark Twain’s comments on parents and children tie into a big theme of the film overall. Dorothy reminds SLC of what it was like to be a kid, and eventually Jean too. I like that Dorothy is the catalyst for improving Twain’s relationship with his daughter rather than a replacement or a substitute. The scene where Dorothy gives SLC his Christmas present was one of my favorites, even if it was a little presumptuous on her end. I’ve never heard this story before, but I hope this is how it really played out. 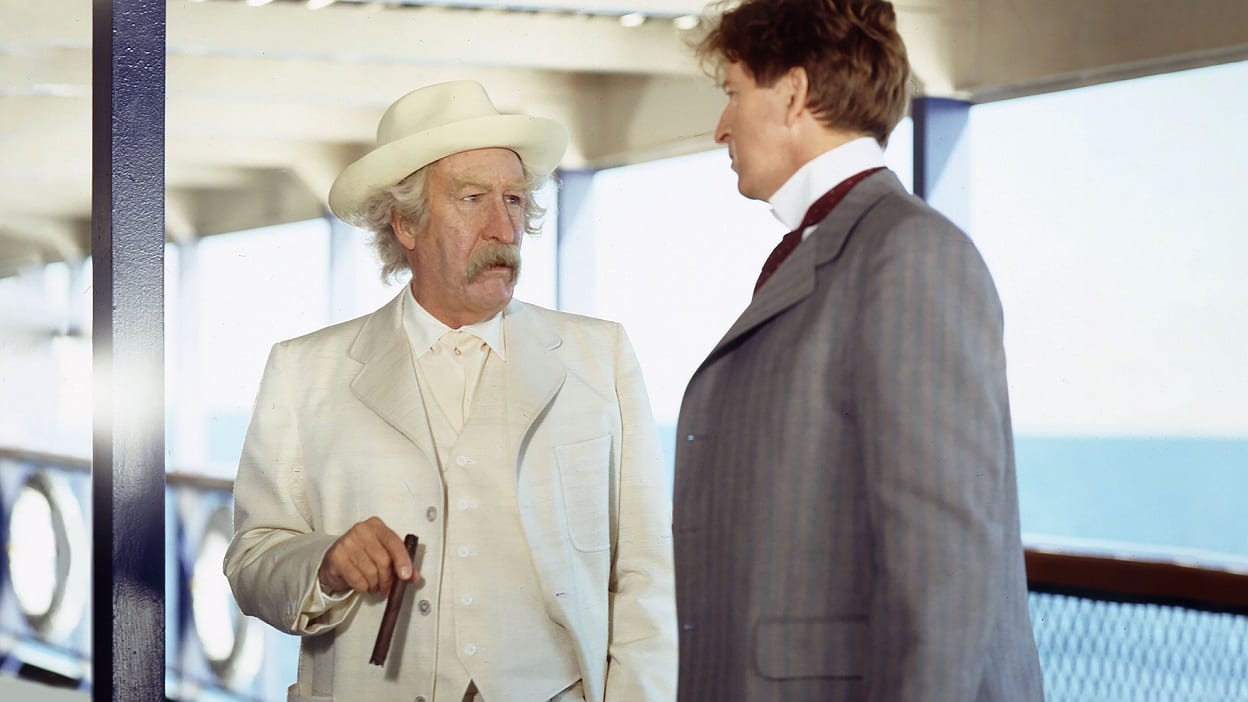 The costume design in Mark Twain and Me is excellent. The dresses and suits don’t stand out too much, but in a historical re-telling like this, that’s a good thing. The cinematography is fairly standard, and the film isn’t edited in a terribly interesting way, but this was a TV movie, so that’s to be expected. The dialogue in Mark Twain and Me is simple but effective. I doubt this is a movie you’ll be quoting all the time, but it gets the job done, and there are some good lines. The original music in Mark Twain and Me is provided by Laurence Rosenthal, and I liked it quite a bit. He really works well with the musical styles of the time. Like many elements of this film, the score isn’t an all-time great, but it’s practical and fits well with what we see on-screen.

And I guess that’s what stood out the most to me about Mark Twain and Me: it’s good. Most technical aspects of this film range from serviceable to good, resulting in a movie that isn’t perfect but still earnest and enjoyable. I think I have unrealistic expectations of movies as a whole. I was trying to explain it to my husband, and he said, “Every movie you see isn’t going to change your life.” That’s true, and while I can’t speak for anyone else, I think I spend too much time looking for great movies and miss some of the good ones as a result. Every film you see isn’t going to be your favorite or get you into a new genre, and that’s okay. If a movie is engaging enough to hold your attention for a couple of hours and you don’t regret watching it, sometimes that’s enough. I think they don’t make enough movies like this now. Smaller, more intimate stories are often pushed to the edge if they get made at all. I tend to like big, loud movies with larger-than-life stakes, but they shouldn’t be the only movies that get made, or even the majority. And that’s not to say that smaller stories are usually weaker than ones containing epic battles either. I’ve mentioned before that I don’t think any concept is destined to be a great movie or that some ideas are entirely bad. It’s all about execution for me. The scene with Mark by himself where he opens his present from Jean is a reminder of that. This movie has a humble goal to tell a simple story, and it does that well.

Mark Twain and Me is, in a word, charming. The performances, music, script, and costumes are all good. The relationships between the characters are my favorite thing about the film, especially Mark Twain, Dorothy, and Jean. Mark Twain and Me is the sort of quiet, comforting movie that we don’t often see these days. It excels at what it aims to do, and I would recommend giving it a look if you’re already paying for Disney+. There’s also a free version up on YouTube, but the quality is abysmal.

Mark Twain and Me is, in a word, charming. The performances, music, script, and costumes are all good. The relationships between the characters are my favorite thing about the film, especially Mark Twain, Dorothy, and Jean. Mark Twain and Me is the sort of quiet, comforting movie that we don’t often see these days. It excels at what it aims to do, and I would recommend giving it a look if you’re already paying for Disney+.

Never heard of it or seen it, but the intellectuals I know have a ton of respect for Twain. They say Mark Twain wrote at a third grade level and was considered a better writer than the elite.