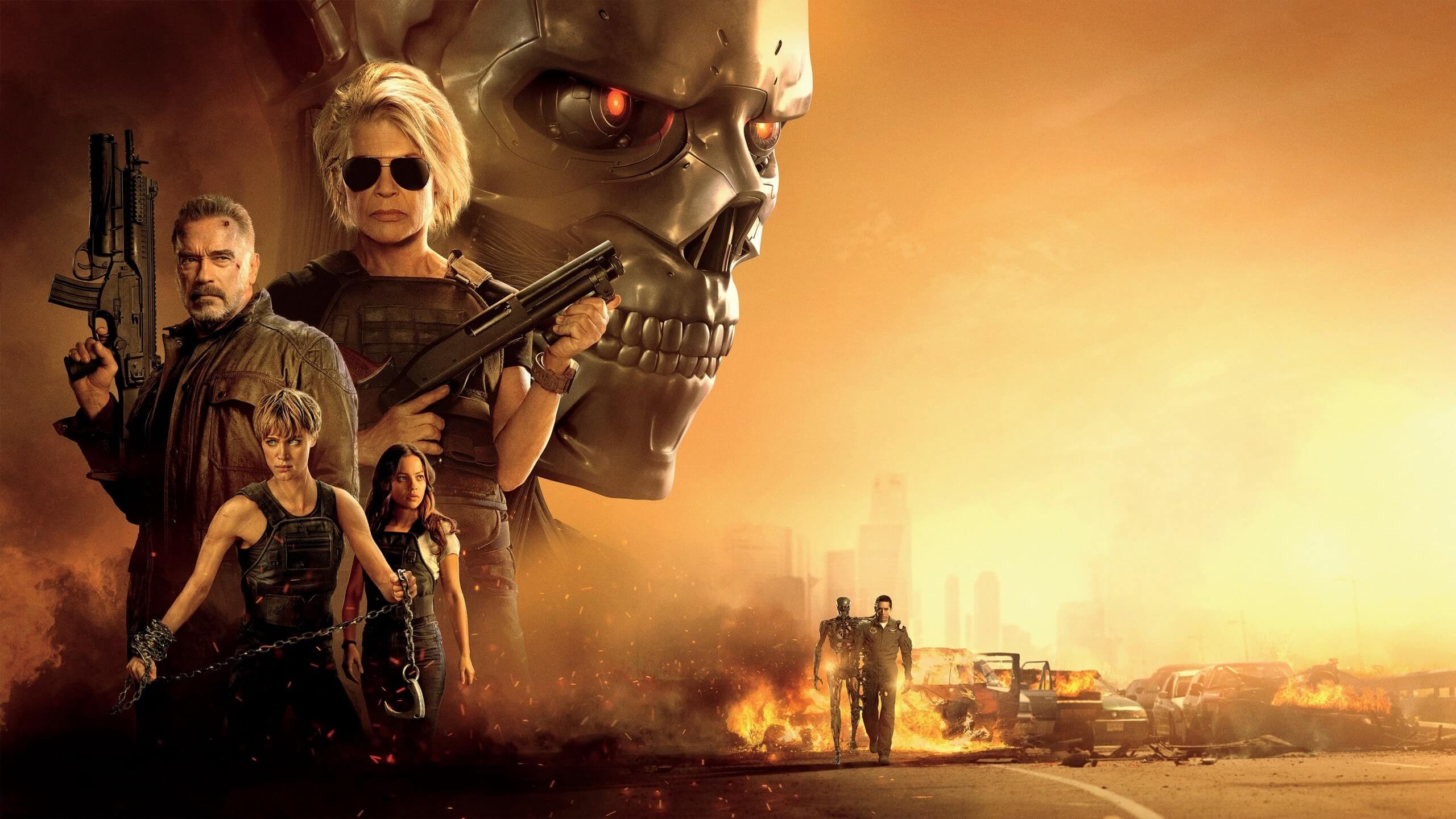 Terminator: Dark Fate is the most recent attempt to make Terminator a true franchise. The film follows a soldier from the future, Grace, as she attempts to protect a young girl named Daniella from a new kind of Terminator while a new evil AI looms overhead. I know a lot of people were not looking forward to this film, and I can’t really blame them because the trailers and marketing haven’t been impressive. Now that the film has been released, is it any good, or were the trailers accurate?

The performances in Terminator: Dark Fate are great. Mackenzie Davis is a strong lead, conveying absolute conviction in her mission, as well as a heap of badassery in the action sequences. She has good chemistry with a lot of the cast, and her interactions with some of them did garner a couple laughs. I’ve always loved Davis as an actress, so she was one of the aspects that drew me to the film. Natalia Reyes is also excellent as Daniella, the new person in need of protection. She gives some rousing speeches, and her desire to stand and fight is quite believable. Let’s be real, though; most of us came to this film to see how Linda Hamilton and Arnold Schwarzenegger were going to fare. And, performance-wise, both of them are excellent, particularly Hamilton. Seeing her back as Sarah Connor was an absolute treat, and she’s still a bonafide badass. Furthermore, Hamilton has a fair bit of emotional work to do in the film, and she doesn’t miss a beat. She’s convincing in every scene, all these years later. Arnie also does spectacular work here, and his connection to Connor, while not handled terribly well, makes for some of the best interactions in the whole film. He’s also quite funny, with some of the best jokes of the film. 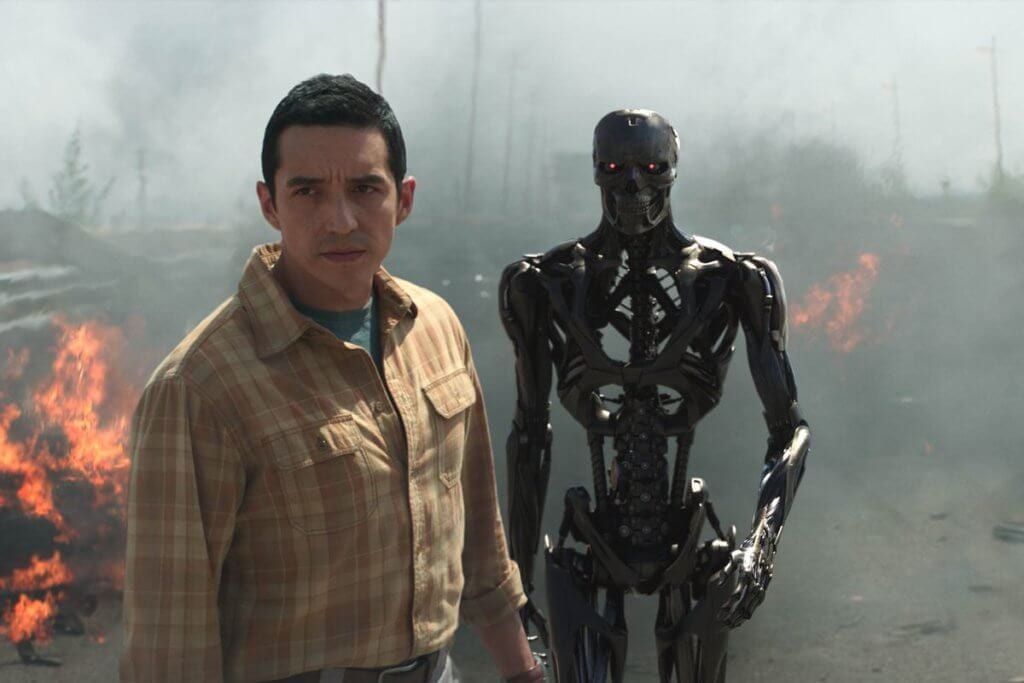 Where Terminator: Dark Fate is really going to divide people is in the story. There are choices made early on that will royally piss Terminator fans off (I’ve already seen people drop their scores to a 2/10 just for THAT scene). I thought it was a ballsy choice, one that would really set this franchise on a different path instead of being just a rehash of T1 and T2. The problem winds up being that they use that scene to tee up ANOTHER T2 redux. There is very little in the story of this film that is new, and less that ends up amounting to anything substantially different. That’s not to say that, in isolation, the plot of Terminator: Dark Fate is poorly formed. The problem is that, as a Terminator film, they never justify that initial choice, so it just rings so damn hollow. It feels like Tim Miller and the writers behind this film really wanted to do something different, but the studio or maybe James Cameron just didn’t let it go that far. I can’t blame any Terminator fan for walking out after the first ten minutes because I can tell you now, the choice is for naught. It’s tough to discuss without spoiling, however.

All that aside, there are some ideas around that choice that result in some good individual scenes, particularly between Sarah and the Carl (Arnie’s Terminator). In particular, there’s a scene in the woods between Daniella and Sarah after they meet Carl that has Hamilton acting her heart out. There’s so much soul and emotion behind her eyes. This truly stirred something within me and made me realize how much better the first two films were for having Hamilton in them. Grace’s part in the story amounts to being kind of a hybrid of Kyle Reese mixed with the T-800 from T2. She’s a soldier sent back in time to protect Daniella, and her story goes about where you think it’s going to go. She doesn’t have the most surprising arc, but Davis really sells it. She has an emotional through-line that carries through the ending, that is possibly the strongest in the film. Then there’s Carl, and it’s tough to discuss his role in Terminator: Dark Fate without spoilers, although I’ll say this: they show us what can happen when a Terminator has no purpose left. Whether you like it or not is up to you. I didn’t mind the choice, but I can totally see how people would be bothered by it. Daniella is the final piece of the puzzle, and honestly, she’s about the same as any character a Terminator protects. She’s just slightly more proactive about trying to fight back, which is an aspect I appreciate. There really isn’t much else to say about her, though. 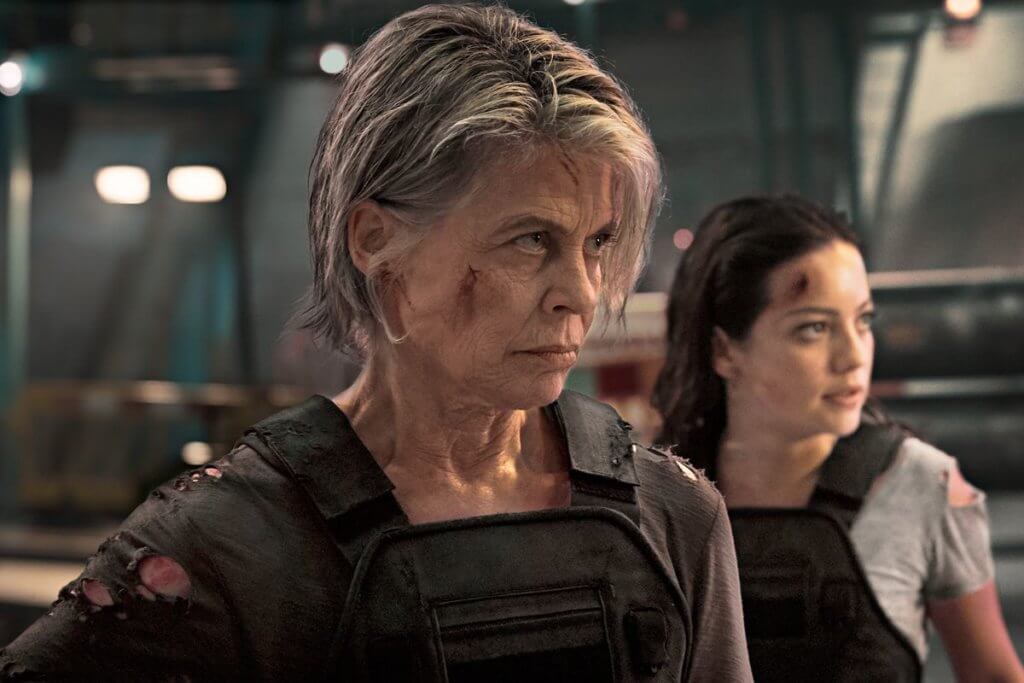 I’ll put this out there, too: if you’re worried about Terminator: Dark Fate being an overly preachy “girl power” film, as I’ve seen a lot of people talking about, it’s no more about shoving female heroes down your throat than the first two Terminator films. There’s one awkwardly written line that kind of sounds like it might be, but I just think Goyer is a very awkward writer of dialogue sometimes. Terminator has been a huge film franchise for action heroines, and this film is no different, and that’s just fine by me. Tim Miller does an okay job directing Terminator: Dark Fate. It’s a slick-looking action movie with some very well-filmed action sequences. That being said, I think he was the wrong guy for this film, especially from an emotional perspective. I don’t think Miller handled the deep emotions of a character like Sarah Connor very well. There was a lot to mine from that character arc, but we wound up getting a surface-level look at Connor’s mental state, which is disappointing as hell because Linda Hamilton is trying her best.

Miller handles the comedy and action best, and there’s a helluva lot of action in Terminator: Dark Fate, possibly to a fault. There are chases, plenty of explosions and hard-hitting fight scenes, but once we get to the plane sequence in the trailer, it gets too big. It stops feeling dangerous, it stops feeling real, and it stops feeling like a Terminator film. Think back to the Tech-Noir shootout in T1 or the Cyberdyne assault in T2. Everything feels reasonably grounded, bullets feel deadly, hits feel bone-crushing. It feels like characters could possibly die. In Dark Fate’s big marquee plane sequence, the believability gets sucked out of the pressurized cabin pretty quickly. The characters fall into CG models and survive blows and situations that should kill them. In this franchise, that just doesn’t sit well with me. There’s also a portion of time towards the middle of the film where the pacing slacks a bit.

The musical score by the excellent Junkie XL/Tom Holkenburg is powerful. His take on the original theme had my heart pumping, and he scores the actiony and quieter moments equally well. I can’t say it’s the best score in the franchise, but I can’t deny that it was great punctuation to many sequences. The sound design and editing are also very good, with some excellent sounding pyrotechnics, crunching metal, and shattering glass. I think Terminator: Dark Fate will have a hell of an Atmos track when it hits 4K.

Overall, while I didn’t hate Terminator: Dark Fate, I think it wastes its ballsy opening in service of doing the same shit we’ve seen for the past 28 years. The performances are good, some of the action is pretty strong, and it has a soaring musical score, but narratively, it’s just another redux.

What did you think of Terminator: Dark Fate? Let me know in the comments section below! Stay nerdy, everyone!

Terminator Dark Fate is a competently made action film, but revisits the well one too many times, even if the performances are strong.