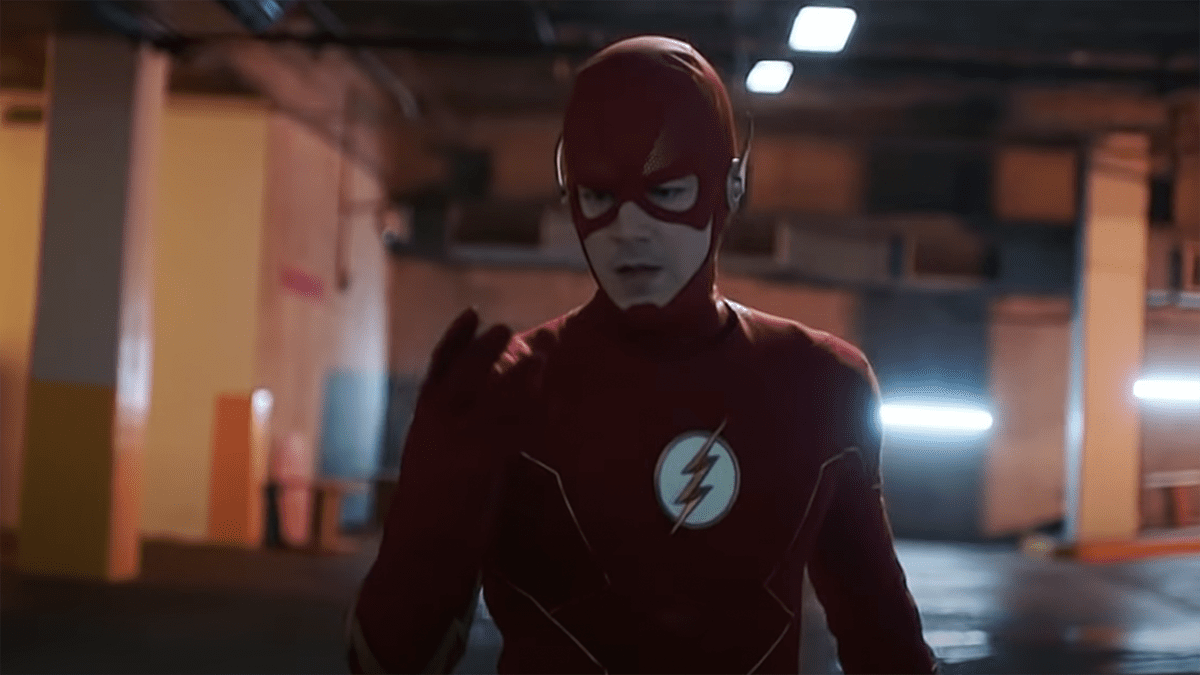 “The Curious Case of Bartholomew Allen” is a stand-alone episode… or is it? It mostly is, but parts of it will be important down the road. The plot has a big inconsistency that makes the middle feel like filler to kill time till the climax, but it’s offset by some terrific character work, particularly in the beginning.

After an encounter with a mad scientist, Barry begins to age rapidly, first at a cellular level, then outwardly. Joe feels disconnected from the young people with whom he’s constantly surrounded.

“The Curious Case of Bartholomew Allen” opens with a superhero montage, which is one trope I never want to die. Nothing captures the fun of these stories like seeing the hero rescue a bunch of people, and having a montage here and there establishes that they’re doing this on a daily basis without interrupting the story. The Flash executes them very well, using a little bit of humor to keep them light; Barry’s encounter with the old lady who gives him a butterscotch candy is perfect, mostly because of his reaction. And the capper is not the supervillain showdown we’re expecting but a game of Dungeons and Dragons, with the 20-30-somethings having a ball while Joe does what I would do in that situation, drinking a Scotch and wondering what the hell is going on around him. (If you’re a fan of D&D, check out Geeks + Gamers Tabletop on YouTube!) This intro works as well as it does, not just because it’s fun, but because it directly leads into the plot and subplot of the week.

The montage that kicks off “The Curious Case of Bartholomew Allen” illustrates how Barry relies on his speed as he zips around town, stopping crimes and saving lives in the blink of an eye, barely putting off his turn to roll the dice in Dungeons and Dragons. Of course, we know this logically, but seeing it in action is important because Barry’s initial confrontation with Pyotr Orloff – who looks uncannily like a beardless Steven Spielberg – begins with him confident, almost to the point of arrogance in his speed. He doesn’t for a second think this old guy is going to escape or give him any kind of problem, and Orloff takes advantage of that by leaving his trap for Barry in plain sight. Barry is unprepared because he doesn’t think he needs to be, and that leaves him in a state where he can’t use his speed. See, Orloff’s machine saps the youth out of anyone it zaps, and while it affects Barry slower than it probably would a normal man, his cellular structure ages, with gray hair, fatigue, and even slight dementia following.

Worst of all, though, is that Barry ages more as he uses his speed. I’m generally tired of the trope where the hero loses his powers, but “The Curious Case of Bartholomew Allen” puts a new spin on it by tying it to Barry’s choices. He technically still has his speed, but he’s losing control of it – he tries to take Cecile to a crime scene and ends up arriving at the Great Wall of China. But worse than that is his speed causing more deterioration. So now, Barry’s got to choose between stopping Orloff and living. This is mirrored by Joe, who is also living a sedentary life in his retirement, still investigating crimes the old-fashioned way, not understanding the young people or their silly wizard games, and doubting his place in an evolving world. Barry and Joe are opposite ends of the same coin: one who wants to move forward but will die if he does, and one who wants to stay exactly where he is but can’t keep up with his family and friends. 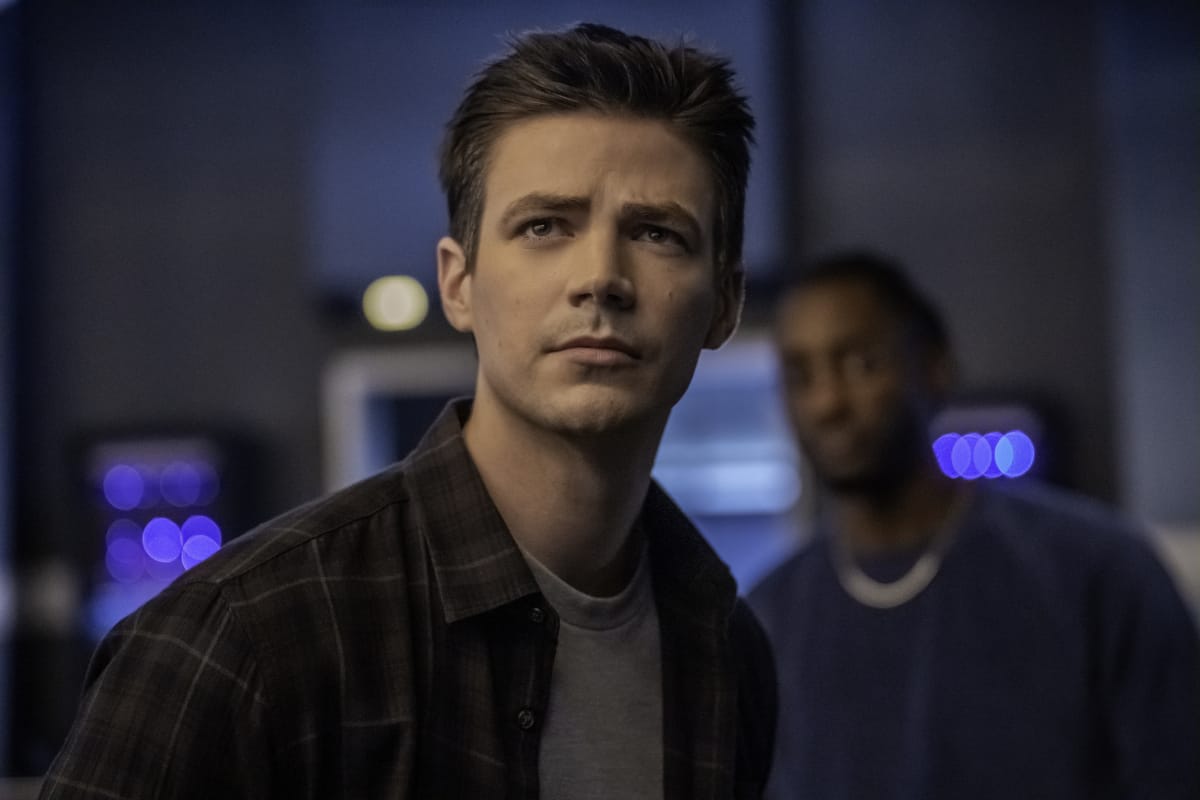 The answer for both of them is to move forward, and they arrive at that conclusion through conversations with friends. Cecile advises Barry to make the most of whatever time he has left, a lesson she learned through her grandmother, who lived life to its fullest as long as she drew breath. (Something I love about this scene is how she refers to her grandmother as a “superhero” and Barry – the Flash – simply smiles, never trying to correct or qualify the statement; it speaks to his kindness, generosity, and general lack of arrogance, despite his actions in the beginning.) And Joe, in a tremendous scene with former captain Singh, accepts that he’s always been stubborn as a mule in the face of change but that he’s also accomplished amazing things when faced with it, not the least of which is raising the world’s greatest hero. Both of these men need to keep going, Barry because his need to save others outweighs his desire to live longer, and Joe because he’s better at adapting than he thinks he is, and he’ll only enjoy his family if he does. Orloff, the villain, fits this theme as well, being a man who refuses to accept his own aging, no matter how many innocent people he has to kill to stop it.

However, Barry’s situation is marred by some character inconsistencies it creates. (Joe’s is fine on paper; I’m only bothered by my suspicion that this is here in part to facilitate his exit as a main cast member.) Once Barry learns that using his speed will accelerate his aging, he resolves to keep being the Flash, and his friends – which, in “The Curious Case of Bartholomew Allen,” consist of Cecile, Chester, and Allegra – are worried and, ultimately, flabbergasted, wondering how Barry could be so reckless with his life. All signs point to Barry having to learn to let go and let someone else take care of Orloff, sort of a general recognizing when he’s got to rely on his troops, which would gel with the season’s theme of Barry becoming a stronger leader. But after talking with Cecile, he decides to use his speed anyway, putting other people’s lives before his, and in doing this, he reverses Orloff’s device and becomes even more powerful. The result is a good one, but I don’t see how this means Barry learned anything. This is what he wanted to do in the first place, and everyone was acting like he was making a mistake; if he was right all along – and he clearly was – didn’t they learn something more than he did? Why waste all this time with the others looking at him like he’s crazy and Cecile giving him a pep talk that leads to him continuing on as he would have? That’s why I say this feels like filler, a way to pass the time in the middle of an undercooked plot. 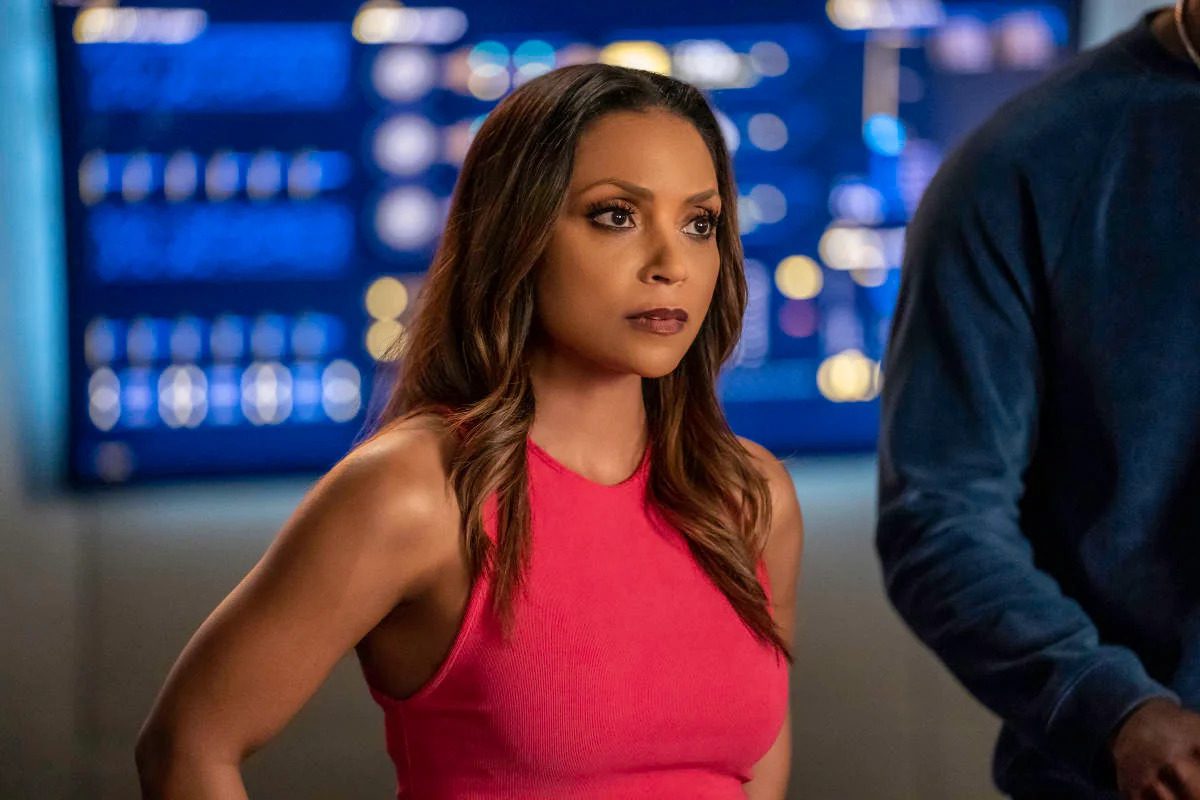 But there’s plenty good about “The Curious Case of Bartholomew Allen.” The lightheartedness of the beginning threw me, and at first, I thought it didn’t make sense considering what Iris is going through. But once Barry and Joe start talking, the meaning behind it becomes clear; Barry is playing Dungeons and Dragons because it makes him think of Iris, and it helps calm him. And Joe is worried out of his mind, comforting himself by Barry’s conclusion that, because Nora has Iris in her future, Barry must save her. But Joe also puts his faith in Barry, in the knowledge that he always manages to save Iris, no matter how bleak things look. That the show takes the time to explain all this rather than just have the silly stuff speak for itself is why it’s a cut above the rest of the non-Superman Arrowverse. Moreover, the sight of Joe dressed like Gandalf – and clearly drunk off his ass to help him get into the spirit of the game – is priceless. I’m also simultaneously impressed and disappointed that they went a whole episode that revolves around gamma rays without once making a Hulk reference. (Although I wonder if that line about facing armies was a subtle one.)  And I loved seeing Singh again and laughed a lot at his jealousy over Kramer knowing Barry’s secret.

But the real showstopper is the ending. Barry finally confronting Caitlin over her plan to resurrect Frost is perfect because it fits so well with everything else that happened throughout “The Curious Case of Bartholomew Allen.” Like Barry, Joe, and Orloff, Caitlin is at a crossroads where she can choose to move on or be consumed by a past she’s desperate to recreate. As she pleads her case, you can see how disturbed and worried Barry is on his face. (This episode has some great acting from Grant Gustin, Jesse L. Martin, Patrick Sabongui, and Danielle Panabaker; even Danielle Nicolet is a lot more fun and personable as Cecile this time.) She gets some low blows in, using Barry’s parents to try to convince him that what she’s doing is right, even something Barry would want for himself. But Barry has been through so much loss that he understands how important acceptance is, and he’s seen first-hand the horrors that come when you try to reverse the past. But he may go a step too far when he generates enough lightning to destroy Caitlin’s makeshift lab; even if he’s right about her moving on, he took that choice away from Caitlin. No good is going to come of this, and his rash decision may be what pushes an already fragile Caitlin over the deep end.

The Flash – "The Curious Case of Bartholomew Allen"

“The Curious Case of Bartholomew Allen” is a better stand-alone episode than it seems, developing Barry and Joe’s characters with fun and heartfelt moments. The middle sags with a redundant plot point that seems to linger more than it probably does, but it’s still a good filler episode.