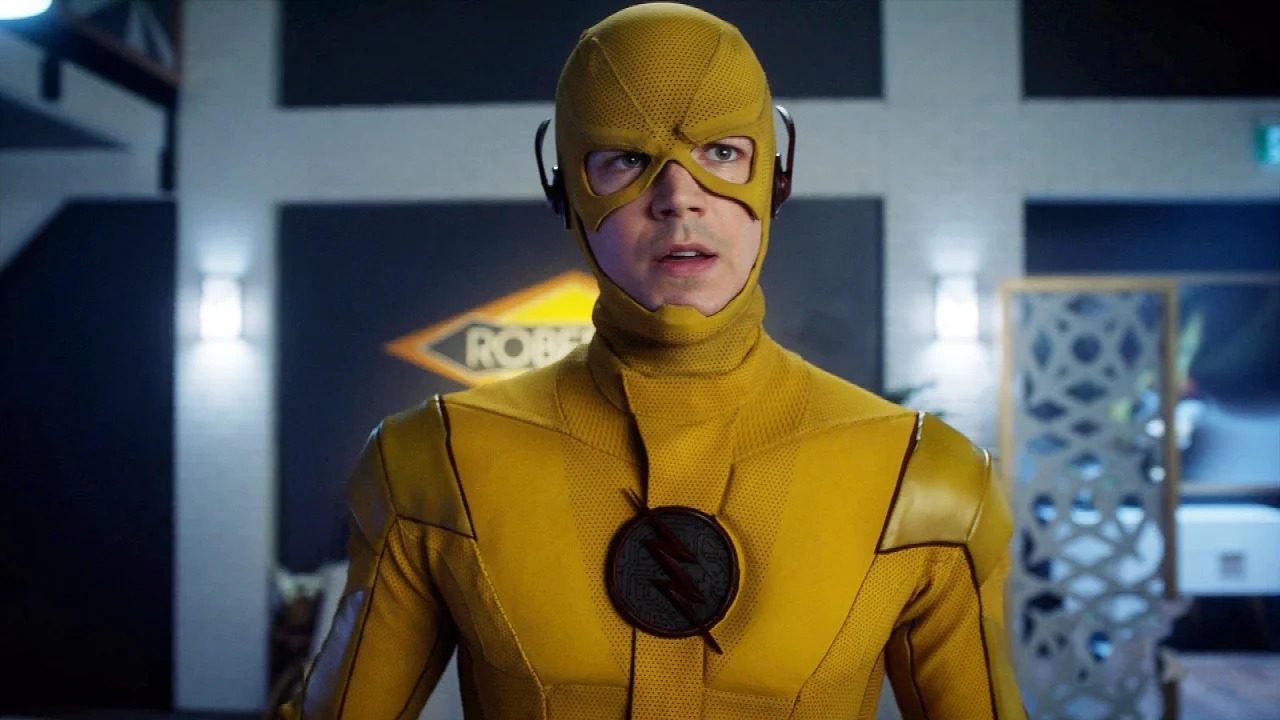 “Armageddon Part 4” is a mostly great episode that kicks itself in the shins a few times too many. The continuing Armageddon storyline takes a surprising twist, and the wacky shifting alliances of an alternate future make for some entertaining scenes between former nemeses, but it focuses too much on some of the supporting players and their relationship drama and it skips over some key story beats to do it.

Now trapped in a dark future, Barry discovers the architect of the doomsday scenario Despero is trying to prevent. Only one of the Arrowverse’s preeminent villains can help Barry save his world. Characters I can’t imagine anyone caring about talk endless of their love lives, or lack thereof.

Last week’s cliffhanger dropped Barry into one of his worst nightmares: a future where all of his friends have turned on him, and Iris is marrying his archenemy, Eobard Thawne. But the opening scene of “Armageddon Part 4” – which is really a continuation of the previous episode’s ending – throws Barry an even bigger curveball: in this world, Thawne is the Flash, and he is the devil in yellow. And when the speed-powered fighting starts, Team Flash rallies behind Thawne, resolute in their belief that Barry is the bad guy, that he killed Cisco and the Legends, among many others. The fight is okay; it establishes that Barry’s friends are now backing up his enemy, but it’s one of those A-to-B fights where people with superpowers hold back because the story needs to happen. I mean, if you know you’re fighting someone who can travel at light speed, maybe you should knock him out when he’s down instead of patting yourself on the back for zapping him with some relatively ineffectual ray gun. But it has the necessary effect on Barry: he discovers he’s completely alone.

But the why is what’s interesting, and “Armageddon Part 4” further establishes the Reverse-Flash (the real one, not Barry) as the best villain in this universe. In gleefully evil mode, Thawne explains that, after his defeat in last season’s finale, he realized that Barry was faster than he was, so he reengineered the timeline once again, this time making himself the one struck by lightning in the particle accelerator explosion – the one who became the Flash. And, to humor himself more than for any practical reason, he used Barry to create the notion of the Reverse-Flash, a villain that would lend credibility to his heroism. All those instances of violence everyone thought Barry was committing, along with Joe’s death, were Thawne framing Barry, planting the seeds for his eventual fall to evil. And here I thought it was Despero arranging the chess pieces all along.

This is brilliant; Thawne makes sense as the guy behind Barry’s “turn,” and making himself the Flash is a logical progression of his fixation with Barry. His obsession with possessing the Flash’s power is what drove him to villainy in the first place; it has now so consumed him that he has literally turned himself into the Flash. The other aspects of Barry’s life – loving Iris, befriending Team Flash, being part of whatever they call this version of the Justice League – are all peripheral add-ons to his newly claimed persona. But underneath – visible only to Barry as he gloats – is the monster Eobard Thawne will always be, the wolf in sheep’s clothing that has doomed an entire world through his vanity. While Barry and Despero debate the immediate and greater goods, Thawne casts both to the wind and serves only himself. 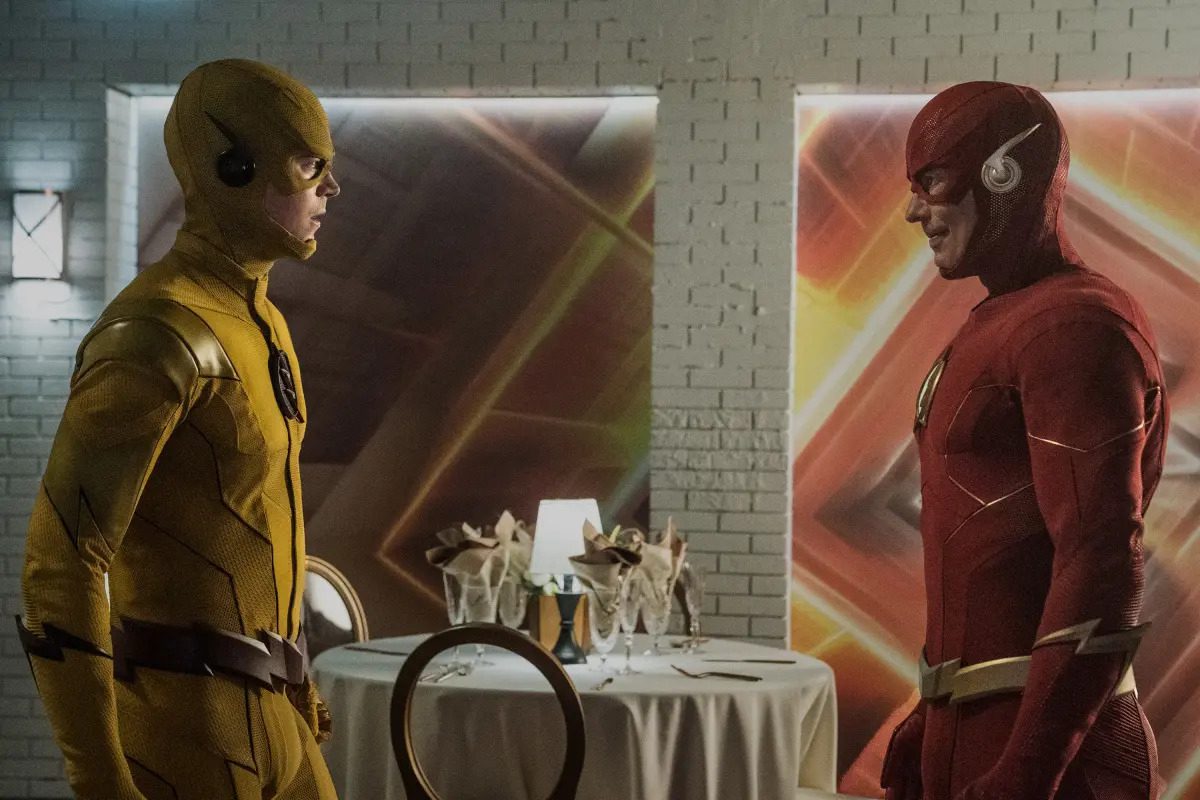 But the knife to the gut about Thawne’s evil plan is that it really does make Barry the villain, and it uses his belief in the immediate good to do it. Barry learns there’s a way to undo Thawne’s time meddling, and it necessitates him going back in time – with some special sci-fi doohickey – but Barry slipped up when he asked Black Lightning to take away his powers. While Jefferson eventually convinced Barry not to give up his speed, he’d already begun the process, and now Barry isn’t as fast as he once was. To generate the speed necessary to time travel, he’s got to run along the equator, but doing so for as long as he’ll need to will cause the Earth to blow up – in other words, he will do precisely what Despero said he would do. If Barry had listened to his friends and had a little more faith in himself, he could have avoided the entire Armageddon scenario; now, his self-doubt will make him the destructor of mankind.

So, once again, “Armageddon Part 4” presents Barry with either choosing the immediate good and shooting for the small chance that he’ll be able to undo Thawne’s machinations or the greater good and allowing Thawne’s victory to stand so that the world will be assured to live. In this case, his answer comes from an unlikely source: Damien Darhk. I was elated to see Darhk’s return; despite being ruined on Legends of Tomorrow, he was terrific on Arrow, and I’m always glad to see the great Neal McDonough pop up anywhere. In this world, Darhk is back to being his old murderous self (as opposed to acting like a high school bully; post-season-1 Legends really sucks), and at first, he agrees to help Barry because he believes he’s a fellow villain. But when he learns the truth – and I appreciate that they showed Darhk doubting Barry almost immediately instead of making him look like a moron – Barry is able to appeal to his humanity, specifically to his love for his daughter, who is dead in this world. Now, Barry and Darhk both want to reclaim a loved one, and both are ready to undo the present for a girl. This one episode, this one subplot, is better than all of last season’s villain-redeeming nonsense, and it’s because you can feel Darhk’s love beneath his evil exterior – a nice contrast to Thawne’s inner demon cracking through the heroic mask he wears. 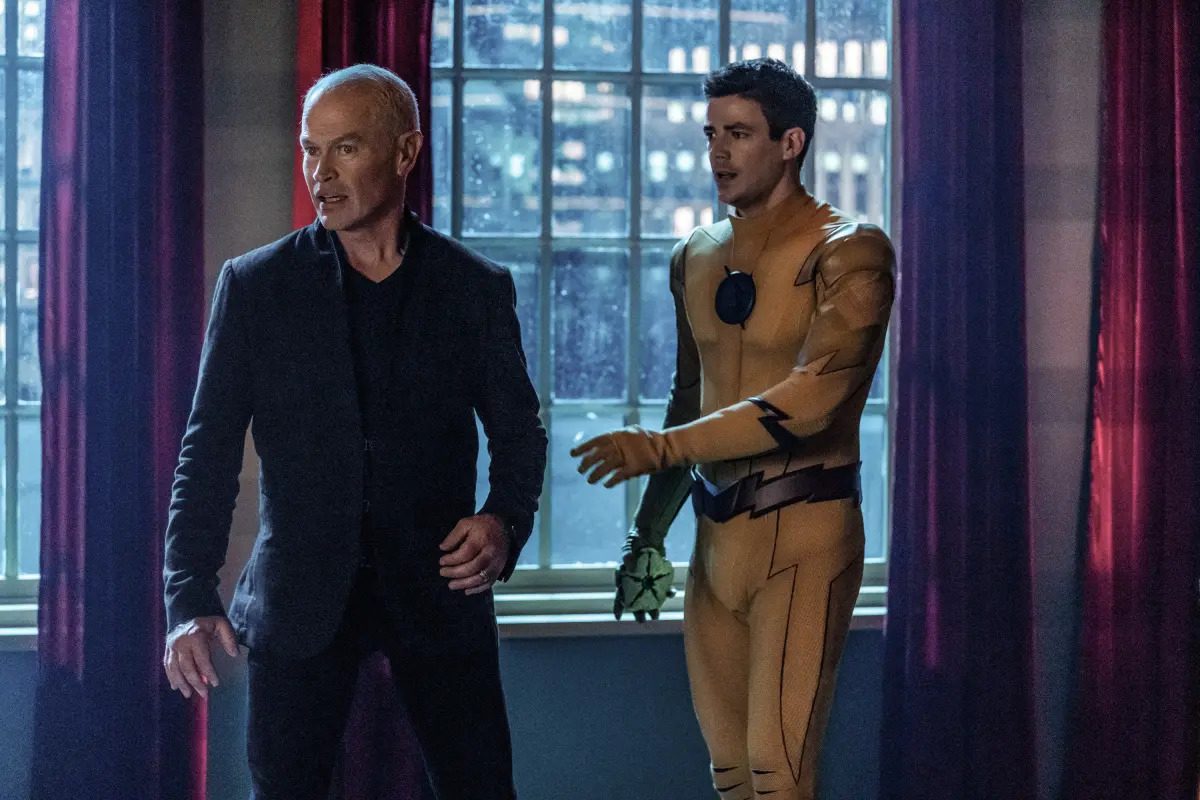 Love is the secret in “Armageddon Part 4,” and like the ethical dilemma to which The Flash returns so often, Iris as Barry’s constant is a tried and true theme that resurfaces in one of his darkest hours. When Barry’s powers aren’t enough, when Reverse-Flash is catching up to him, when the world is on the verge of destruction, the leap of faith Iris takes for him, the love a marauding time traveler can’t take away, is what saves him, what gives him the strength to pull off his impossible plan. Thawne’s plot to steal Barry’s lightning was doomed to fail because Barry will always have Iris as his lightning rod. Similarly, Damien Darhk is willing to destroy a world where he is alive and thriving as a rich and powerful figure because he has a chance, infinitesimal though it may be, to save the daughter he thought he’d lost forever; as Iris is for Barry, Nora (another Nora? There are other names, guys) is Darhk’s constant, bringing out the best in an otherwise evil man. That is why Barry and Darhk succeed while Thawne fails; Thawne doesn’t have a constant because a man who only loves himself will never truly be loved by others. He had to cheat to get Iris to fall for him, but Barry’s honesty in the face of Thawne’s lies reclaimed her. Eobard Thawne is all alone, and now he’s forced to watch his perfect world crumble around him. Not that he’s done yet, of course; there’s still one more episode of Armageddon to go.

Sounds great, doesn’t it? And it is! But there’s another subplot in “Armageddon Part 4,” one that takes up much more screen time than any responsible write would have given it, and it bogs down an otherwise excellent episode considerably. Everyone’s favorite will-they-won’t-they couple, Chester and Allegra, get their very own obnoxious love story, and all of the guest stars are swept up in it (except for Batwoman, who is now Iris’ best friend because they wanted as much crossover power as they could get but couldn’t think of anything else for her to do). According to Allegra, she and Chester slept together once, but he disappeared in the morning, so Allegra moved on with her life. This disheartens Alex Danvers because they’re, like, so totally Ross and Rachel, you guys! So she interrogates Chester as if their ten-year-old romantic entanglement is any of her business, and he tells a different story, one in which he went out to get breakfast and found Allegra gone. You get the gist; they love each other but are afraid of being together because whatever, and they get together by the end because who cares, and love conquers the caffeine struggling to keep me awake. Even Ryan Choi (remember him from “Crisis on Infinite Earths?” Me neither, but they really want us to think this is an important character) gets in on the boredom, going from a cynic who doesn’t believe in love to single and ready to mingle. The best part of this is Caitlin picking up the Allegra/Chester pairing from the periphery and looking over with a “Huh?” expression. God bless Caitlin Snow. 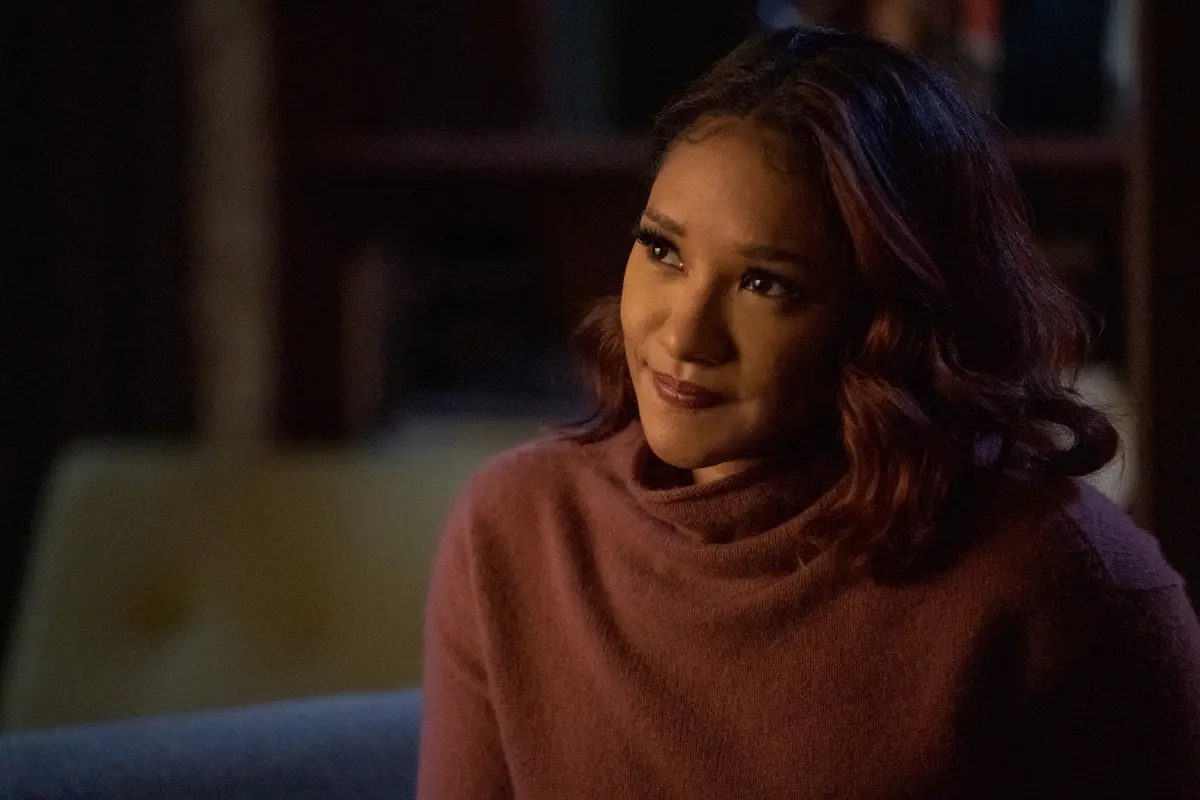 You know who would have been a better focus of this screen time? Despero. When we go back to the present towards the end of “Armageddon Part 4,” Despero has slaughtered everyone on Team Flash except for Cecile, whose psychic abilities he wants to use to find Barry. It’s a cool visual, and it helps establish the desperation of Barry’s mission, but it could have been better. Imagine if, instead of two barely-characters stammering in each other’s presence, the episode jumped to 2021 and showed Desepero hunting down Barry’s friends one by one, ruthlessly killing them and arranging them for Cecile when he took her alive. Talk about ratcheting up the tension; we’d see what Barry couldn’t and know that there’s more to his decision than just maintaining Thawne’s world. It would also help contrast the various actions and motivations of the main players, throwing Despero into the mix with Barry, Thawne, and Darhk. I know the CW loves its soapy melodrama, but it shouldn’t come at the expense of the plot.

“Armageddon Part 4” gives a satisfying explanation for the Armageddon plot, reintroduces some classic Arrowverse villains, and examines a couple of the show’s central themes in new and fascinating ways. But it also hamstrings the story’s momentum with a meaningless romantic subplot, sidelining one of the key figures in the five-parter at the same time.

“Armageddon Part 4” gives a satisfying explanation for the Armageddon plot, reintroduces some classic Arrowverse villains, and examines a couple of the show’s central themes in new and fascinating ways. But it also hamstrings the story’s momentum with a meaningless romantic subplot, sidelining one of the key figures in the five-parter at the same time.