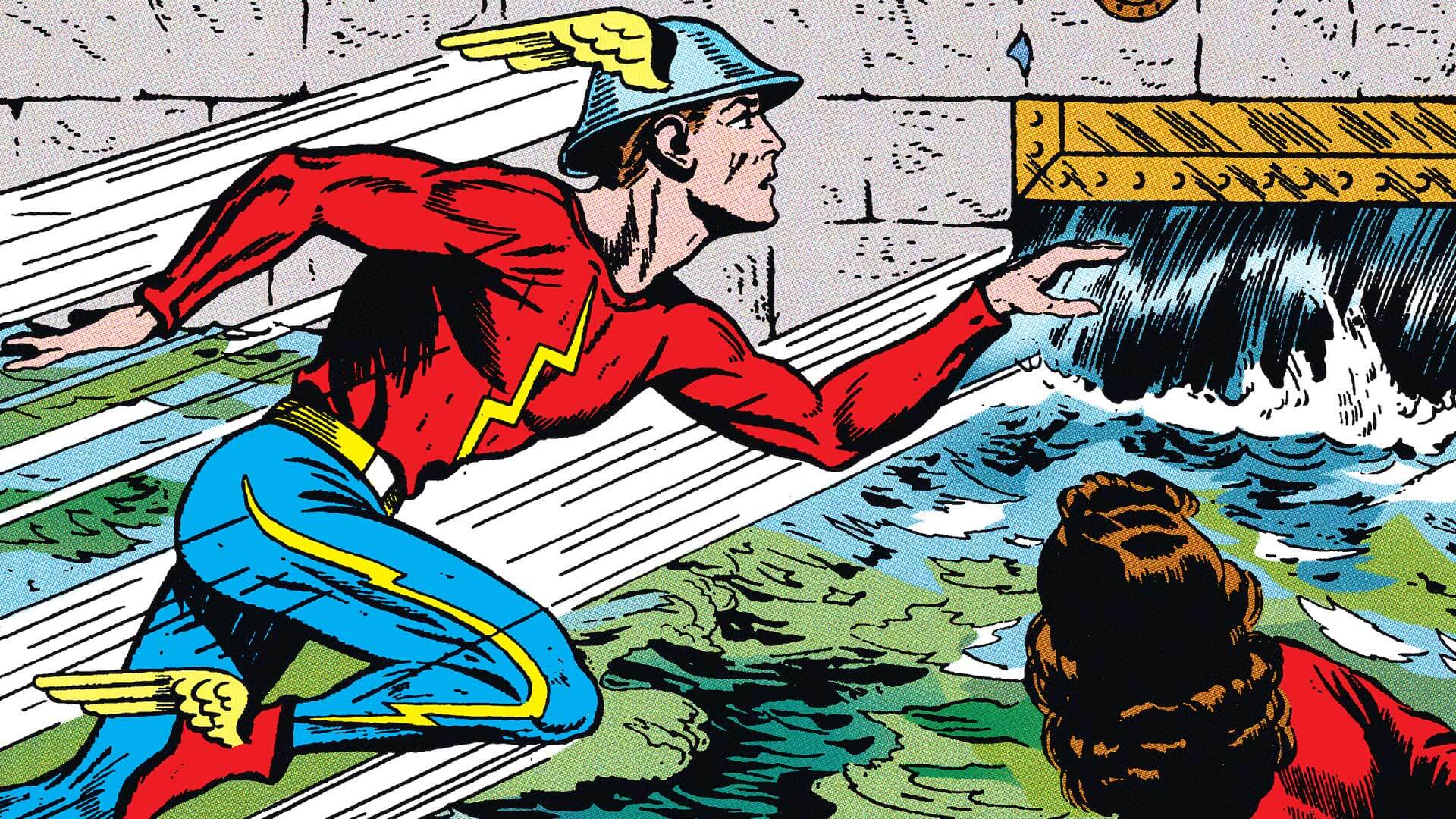 Welcome, speedster friends and family, to the first of a weekly, weekend series that delves deeper into all things the Flash: the characters’ history and lore, the source of their power, the various abilities that they receive from the Speed Force, their substantial rogues’ gallery and more! At the end of each article, when applicable, I’ll offer some reading recommendations so that you can personally beef up more on each topic to verify that I’m not just fast-talking you. With that said, let’s kick this shindig off with an introduction to the very first DC character to bear the name of the Flash, the Flash of Earth-Two JAY GARRICK.

First appearing in Flash Comics Vol 1 #1 in 1940 and created by Gardner Fox and Harry Lampert, Jason “Jay” Garrick was the first “Fastest Man Alive” in comics. His origin is among the least complicated of the speedsters on this list, as was common amongst the lion’s share of heroes created in that era. Jay Garrick was working in his laboratory and fell asleep, causing him to inhale the heavy water vapors in the lab, activating his dormant metagene. Upon waking up, he discovers that he can run at superhuman speeds and possesses equally fast reflexes.

Jay’s Flash suit is considered a tad bit “antiquated” by many readers who are new to the Flash mythos, but the simplicity of the costume is deliberate, as Jay was a former college football star and the red, lightning-bolt-emblazoned shirt and blue track pants are reflective of that past. Incidentally, using his newfound metahuman powers to help his college football team win a big game is what impressed his future wife enough to score him a first date. His winged helmet, which he has utilized as far more than headwear (some of his tricks would put Captain America’s shield-throwing to shame), is modeled after that of the Roman god Mercury and belonged to Jay’s father Joseph Garrick when he fought in the first Great War.

Garrick’s exploits stretch beyond that of his solo adventures (or his team-ups with the Green Lantern of his era, Alan Scott), as Jay is a founding member of the Justice Society of America. Following the events of DC’s massive retcon with Crisis on Infinite Earths, Jay was no longer the Flash of Earth-Two, but rather a Flash that had existed during World War II and was Barry Allen’s predecessor. While many of the original members of the JSA are now long-since deceased, Jay – along with Alan Scott and Wildcat – still maintained a presence on the historic team’s most recent incarnation prior to the DC reboot of the New 52, where he served as not only the team’s resident speedster but also as a mentor to many of the younger members, including Star Girl and the team’s leader Powergirl. His heroics continued to stretch beyond those of someone relegated to a mentoring role, as he also was the only speedster left after the events of Infinite Crisis and the Speed Force was temporarily inaccessible to the others, causing him to dust off his helmet once again.

Jay’s mentor role went even further than within the Justice Society. As the grandfather of sorts to the Flash Family, Jay stands as the voice of fatherly reason and advice to all of the younger Flashes, even to the extent of him and his wife Joan taking in young Bart Allen and raising him when Bart’s former mentor Max Mercury went missing in the Speed Force. He was absent in his known form from the New 52 continuity, with DC deciding to create an adolescent version of him with a costume that more resembled that of Johnny Quick from the evil Crime Syndicate of America from Earth-Three. His New 52 incarnation was a far stone’s throw from the original, and his powers were bestowed upon him by Mercury, as opposed to a lab accident. The departure was less than a runaway hit with the wealth of Flash fans. Since the advent of the Rebirth retcon (specifically in “The Button”), it has been revealed that the original Jay Garrick has been trapped within the Speed Force and unable to escape (as tends to happen any time MOST speedsters become stuck inside the mystical energy force). His present situation in the DC Rebirth is a source of much debate and mystery among Flash fans, and hopefully, we’ll see the full return of the original and dapper “Fastest Man Alive” in short order.

Where overall speed is concerned, Jay Garrick is the slowest among the Flashes, topping at the speed of sound (770 mph) from his metagene powers alone. In fact, when Jay was initially created, the DC writers were careful to ensure that no other hero’s powers could overshadow those of Superman, and as such Jay’s actual speed was left relatively ambiguous. However, once connected to the Speed Force – thanks to Barry Allen generating it throughout all of time and space – he was able to reliably reach speeds upwards of 20 times the speed of sound, as well as being capable of hitting speeds just short of the speed of light. As Flash skillsets go, Jay’s list of powers and abilities could be seen as somewhat generic, primarily consisting of those which are attributes of anyone who has held the Scarlet Speedster mantle. These abilities include PHASING through objects by manipulating the vibration of his molecules, DECELERATED AGING (causing him to appear in his 50’s while more accurately being in his 90’s), INCREASED PERCEPTION, which allows him to process time as though it was standing still, as well as the ability to generate numerous VORTEX CREATIONS to levitate objects, create pocket tornadoes, or suck the air out of an enemy’s lungs to suffocate them in battle. Jay also possesses SPEED FORCE EMPATHY, which allows him to sense the presence of other beings connected to the Speed Force.

Though Jay Garrick may not be the most skilled with the Speed Force or even close to the fastest Flash, he is of no less importance. His fatherly demeanor and cool head in all situations make him, in many ways, the most grounded and relaxed member of the Flash Family, as he lacks the “weight of the world” or “ominous force” mentality that is present or plaguing in the minds of the Flashes who eventually succeeded him.