The official Pokémon YouTube channel uploaded a brief video early this morning which revealed a few new details for this fall’s release of Pokémon Sword and Pokémon Shield for the Nintendo Switch. While the video itself was barely two minutes long, we did still learn a few new things. First up, and most notably, was the reveal of Galarian Forms for Pokémon. Just as its predecessors, Pokémon Sun and Moon, did before it with Alolan Forms, Sword and Shield seek to add region-specific forms to the Galar Region. As with the Alola Region, Sword and Shield are taking the concept of adaptive traits and divergent evolution with several species of Pokémon from previous generations.

The first Galarian Form Pokémon to be showcased was Galarian Weezing, giving the gas bag a new form just as its Poison-type brother Muk did in the Alola Region. The new region, as it did for Alolan Forms, gives this specific Weezing new typing in a Poison/Fairy dual-typing. Its design change fits in with the industrial setting of the Galar Region, with each of the noxious gas Pokémon’s two heads now donning a towering top hat that acts as a smokestack. 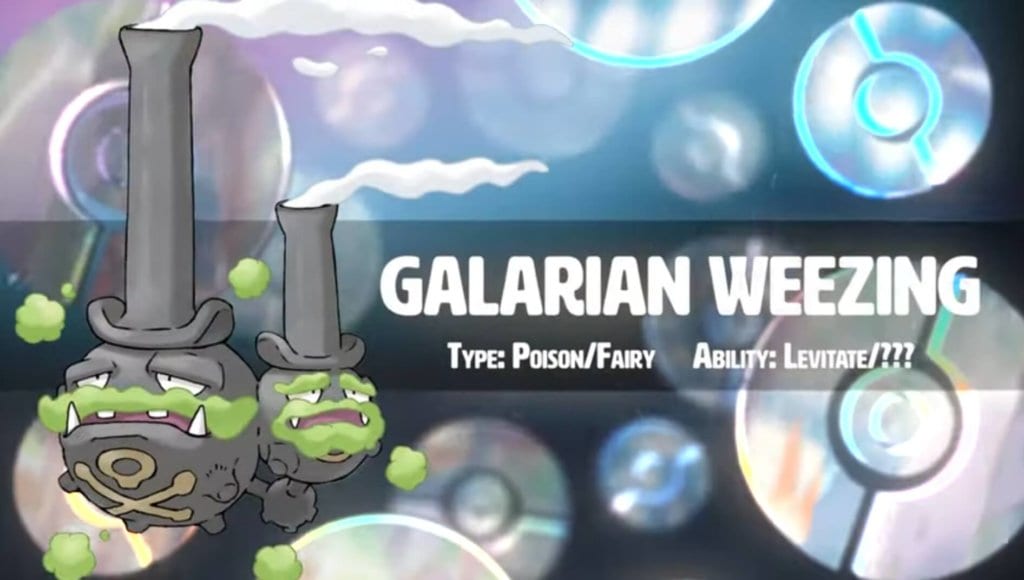 Up next is Galarian Zigzagoon and its evolution, Linoone, both of which receive new dual-typing of Dark/Normal. The Gen 3 Pokémon also gets a fresh coat of fur, with its traditionally light brown stripes being replaced by black ones. Additionally, this new form for Zigzagoon and its evolutionary line appears to have a rabid or psychotic theme to it, which is exemplified by its blood-red eyes and hanging tongue. More surprising, however, was the reveal of a third stage for the Pokémon’s line. That new stage is Obstagoon, and is a more anthropomorphic form, with it now being up on two legs and having its arms held across its chest. The tightly crossed arms may be just hiding its sharp claws or to look tough, but to me, it’s reminiscent of a straight jacket, which further solidifies the rabid and crazy theme of this form to me. 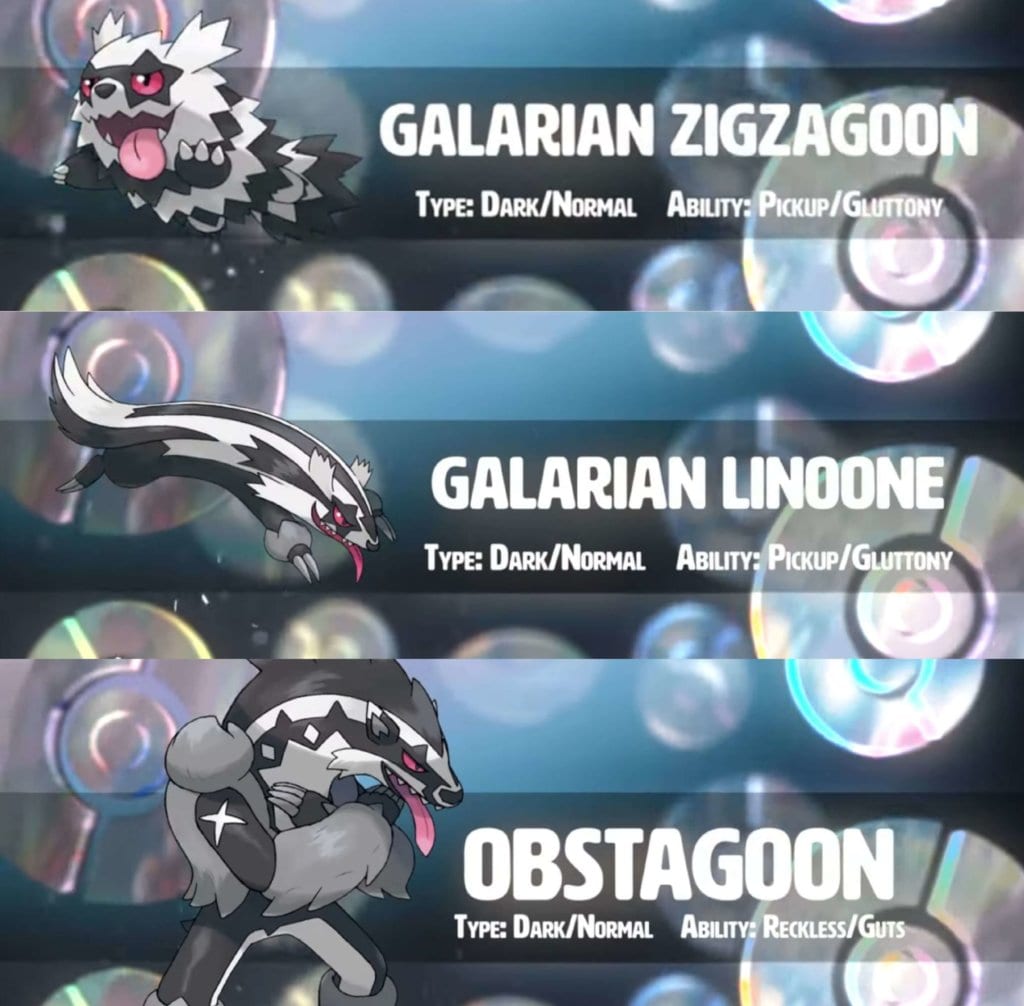 The final new Pokémon reveal is one that I can undoubtedly identify heavily with, and that’s Morpeko. This little yellow rodent is a form-changing Pokémon. While in “Full Belly Mode,” it has a cheerful demeanor and is an Electric/Dark dual-type, but when it reaches “Hangry Mode,” it becomes a red-eyed, indigo-and-black ball of rage, and its signature move, Aura Wheel, also changes from Electric to Dark. Pokémon that change forms mid-battle when specific criteria are met is still a relatively recent and untapped concept, and I hope that they play around with this a little more. 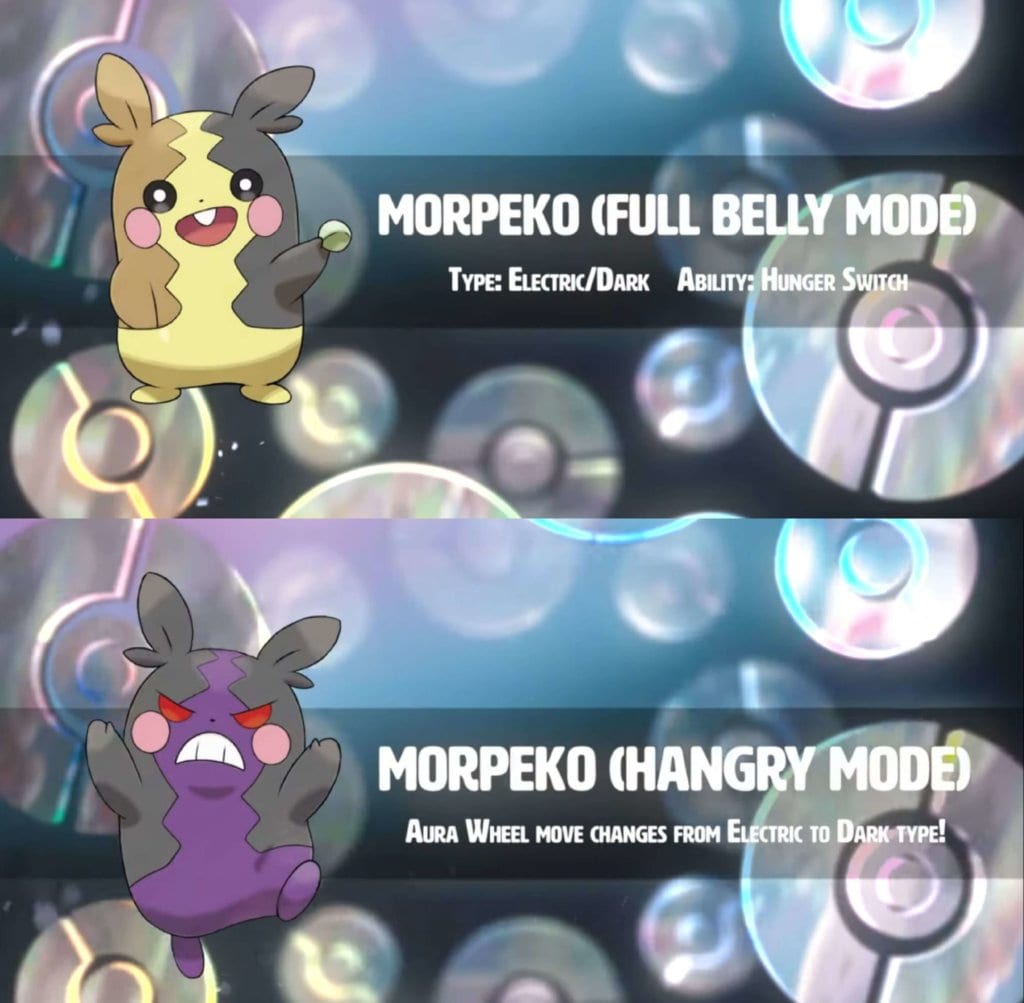 The Galar Region is bringing with it more than new Pokémon species, and new forms for existing ones; we’re also, naturally, getting new rival trainers to compete against for the top spot in the Pokémon League. The new rivals shown off in the video are Bede and Marnie. No details were given on either trainer, but we can at least speculate that Marnie is a celebrity of some sort (perhaps in a punk or rock band), and the new team we’ll be going up against, Team Yell (yeah that sounds as bad as it reads…), is described as “Marnie’s wild fans.” Today’s reveals were minor, but the more we learn about Pokémon Sword and Shield, the more we’re excited for November 15th to get here! 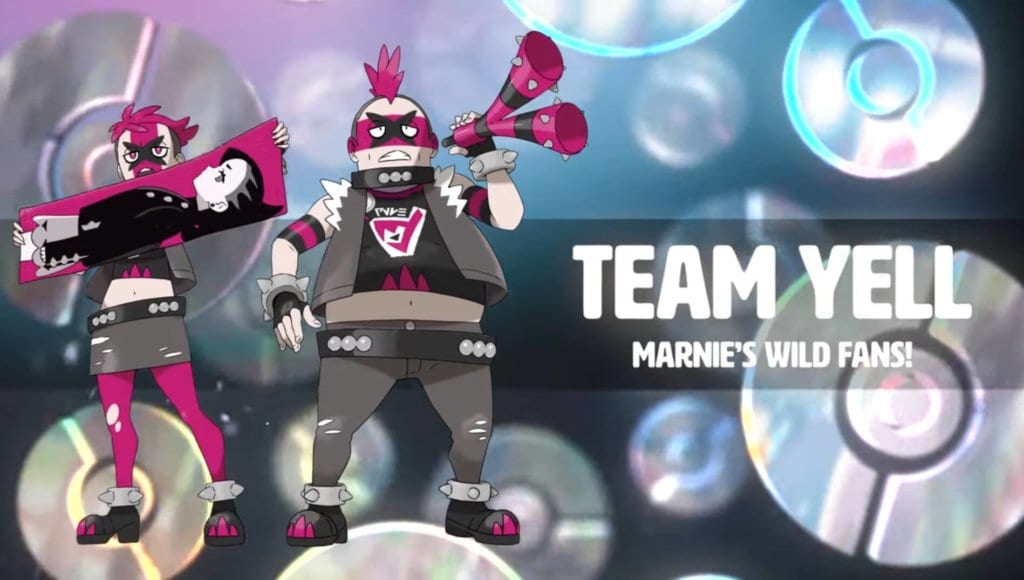