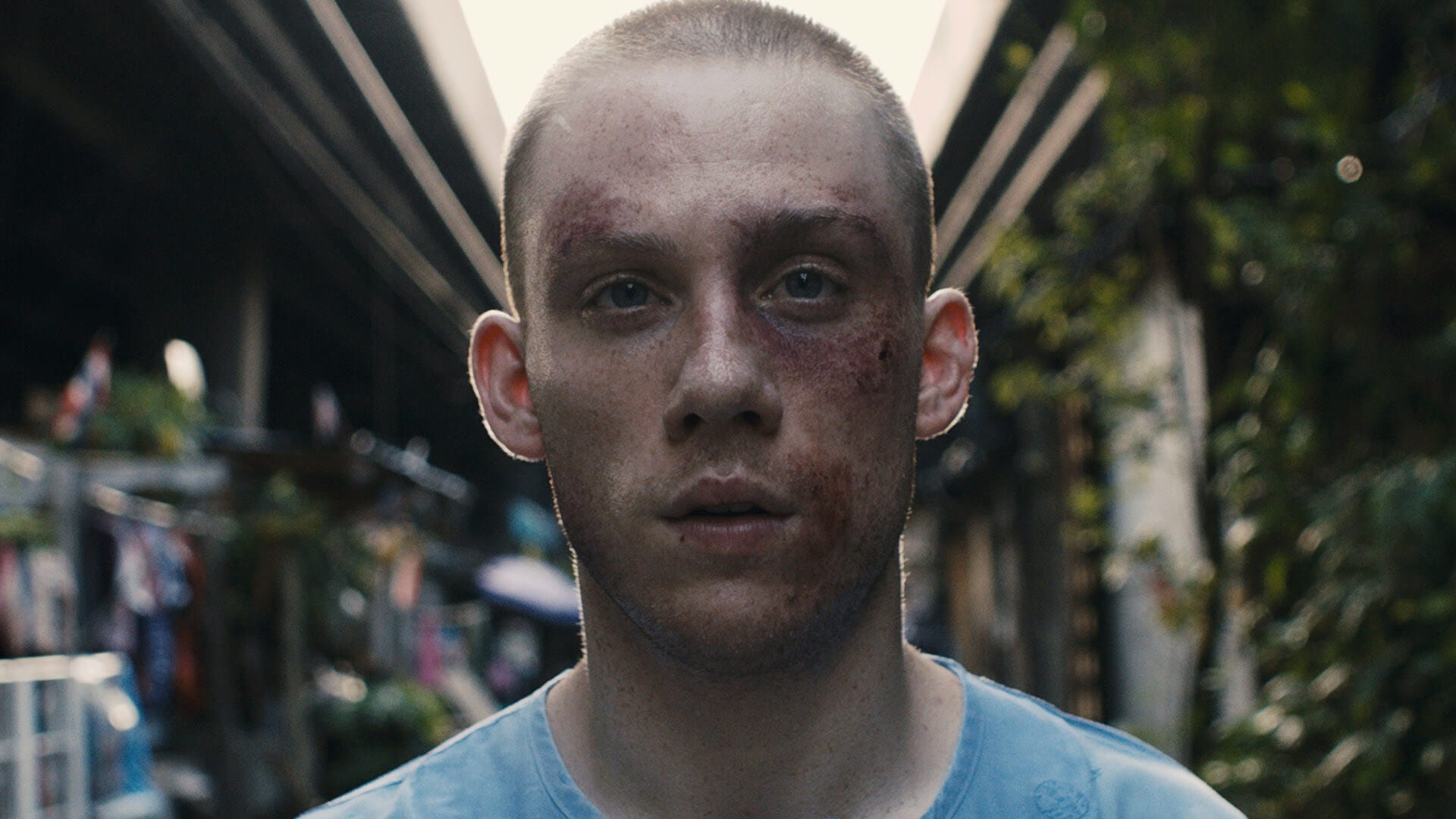 A Prayer Before Dawn is a true story that follows Billy Moore, a down on his luck boxer and drug addict who is thrown in prison in Thailand. While inside, he discovers that there is a prison boxing team and seeks to join it, hopefully saving himself through fighting. If I’m going to be completely honest, I had no idea this film existed until very recently, but I love A24 as a studio, and the risks they take on movies, so I gave this one a shot. A24 has done it again because A Prayer Before Dawn is a stellar piece of filmmaking.

The characters and performances are great, but the real centerpiece of A Prayer Before Dawn is Joe Cole, who delivers an unbelievably strong performance as Moore. The anguish, the anger, the sheer emotion that Cole shows is amazing. He 100% deserves an Academy Award nomination for this; it’s just that good. Moore himself is an interesting character. He isn’t particularly the nicest dude in the world; he’s quite quick to anger, and his volatile nature causes issues for him throughout his harrowing journey. His addiction is a pretty crucial part of the narrative, rather than just being a character flaw; it drives Moore to do the things he does, good and bad. This leads to some of the most emotionally powerful moments in the film, and Cole makes the most of the situations with which this trait presents him. 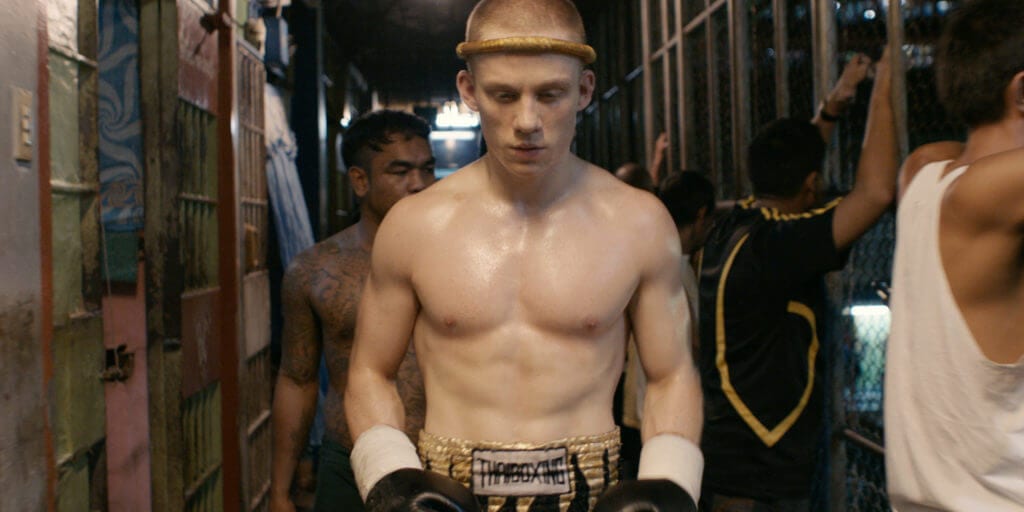 The rest of the cast is excellent as well. I obviously have no clue what it’s like to be in a Thailand prison, but I’d wager that the supporting players in A Prayer Before Dawn are a pretty accurate representation of that life. We pretty much know none of them by name, but we do learn a bit about a couple of them, and their authenticity helps build the atmosphere and, later, the camaraderie. There are a couple of actors on the boxing team that I particularly enjoyed watching, such as the main coach. I also thought it was cool that the prison warden is played by Vithaya Pansrigarm, who played the police officer/God in Nicholas Winding Refn’s Only God Forgives. He isn’t in the movie much, but he truly commands the screen. Pornchanok Mabklang is a small but important piece of the film, playing Fame. She’s given a little development, and her relationship with Moore is surprisingly strong considering how little overall screen time it gets.

Following Billy Moore through his odyssey had me on edge from beginning to end. They don’t pull any punches (pun intended) showing the life of a heroin/meth addict. You’d think it would be hard to root for Moore, but once he reaches the prison – when he begins his real journey – it’s powerful stuff. It’s truly inspiring to watch his transformation. They don’t seem to gloss over Moore’s screw-ups, even when he’s on the right path. He’s an incredibly well-realized, human character, and that’s why you eventually get behind him. Watching him form a brotherhood with his team was one of my favorite parts of the film as well, and even that is imperfect on Moore’s part. I was cheering at his successes, and I was metaphorically shouting at the screen when he was making bad decisions because I genuinely wanted to see this man succeed. The ending is truly believable as well.

A Prayer Before Dawn has an incredibly strong visual style. David Ungaro utilizes a handheld camera and doesn’t shy away from dropping the audience right in the middle of the boxing matches, as well as really invading Joe Cole’s space in a good handful of scenes. This style not only puts us in the thick of it but maximizes Moore’s perspective. It also seems that, as Moore gets a handle on his addiction, the camera calms down, almost as if it’s mirroring Moore’s internal state.  The direction of the film is fantastic. It’s also exceedingly well edited; no scene goes on too long, the film never drags, and every moment feels integral.

The musical score by Nicolas Becker is stellar as well. It’s not a super showy score, not full of these epic string swells or anything of that sort. It’s low key for the most part and drives the dangerous atmosphere home. Becker uses music to ratchet the tension up in the quieter, threatening scenes, and the ambiance he creates perfectly accompanies the images on display. The sound design is also really strong, especially in the fight scenes. The punches are powerful, and the sound of glove hitting flesh is bone-chilling and realistic. The fights feel so dangerous and more brutal than most boxing films, and the sound and visuals really compliment each other; I can’t say that enough.

Is there anything I didn’t like about A Prayer Before Dawn? If I really had to pick at it, the camerawork took some getting used to, as there are some truly dizzying sequences, but I eventually acclimated to it. I also would have appreciated spending more time with Moore and Fame, as I did like the dynamic they were going for between the two of them. I also wanted to know more about Fame in general. I wouldn’t call these major issues, as they didn’t take away from my enjoyment of the film. I’ll also add – not as a negative – that this movie is INCREDIBLY disturbing at times. The prison lifestyle they show isn’t fluffed up at all; its gritty, violent, and terrifying to witness. Certain situations almost made me sick to my stomach. Watching Moore on drugs is also really disturbing. I mention this because some people may not be made for a film like this. It’s a tough watch, but so worth it.

A Prayer Before Dawn left my head ringing and my heart in my throat. It’s violent and disturbing, yet rousing. The way it portrays addiction and violence is real and in your face. It’s difficult to watch, and it’s not for everyone, but if it sounds like it’s up your alley, do yourself a favor and watch it.

What did you think of A Prayer Before Dawn? Let me know in the comments below! Stay nerdy everyone!

A Prayer Before Dawn

Disturbing, gritty, and somehow rousing, A Prayer Before Dawn is an incredible boxing/prison drama, headlined by a career best Joe Cole.