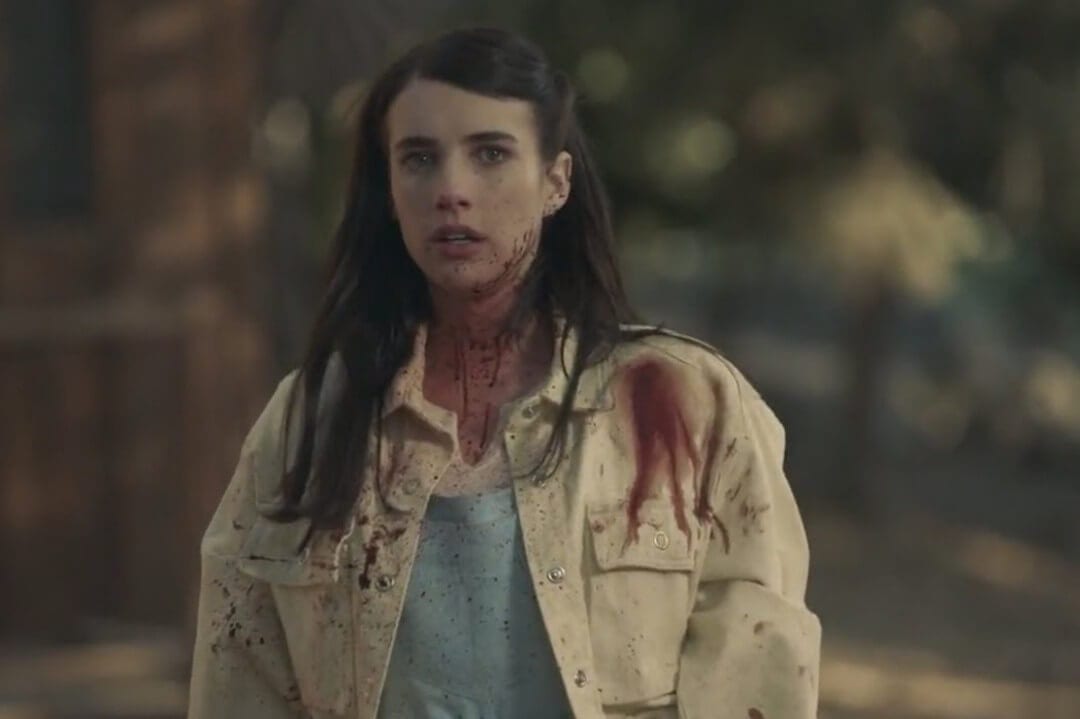 “Red Dawn” finds Donna in the year 1980, spying on her father from a car. He goes to a house, bringing a woman in with him, prompting her to go inside and investigate. To her surprise, she finds more than an affair: he has a closet in which he has been killing women. She pleads with him to let her help him change, but he kills himself, to her shock and horror. In the present, Richard Ramirez tells Donna all about Satan and reveals that he knows about her father. Donna’s father appears to her, encouraging her to follow in his footsteps and embrace the darkness within. Meanwhile, Xavier suggests that they burn the entire forest down, a notion that the others don’t take well. Margaret shoots him, saying that she had to stop him before he hurt anyone. They take him to a cabin, and Margaret decides to cross the lake to get help. Montana volunteers Chet so she can be alone with the unsuspecting Brooke. However, before she can strike, Brooke sees Ray outside and runs after him. He can’t remember anything after getting on the motorcycle, but goes with Brooke. On the boat, Margaret and Chet talk about death and the afterlife. Margaret beats Chet in the face with an oar, slices his ear off, and throws him in the water.

Meanwhile, as the two hide, Brooke tells Ray about her disillusionment with L.A. and her own plans. He sympathizes, telling her how he lost sight of his dreams. She kisses him, saying she doesn’t want to die before she’s really lived. Donna finds Montana and Xavier, who are less than happy to see her. She tells Xavier that she was the one to release Mr. Jingles, leading him to attack her. In the chaos, Montana leaves to find Brooke. Brooke tells Ray that he was her first lover, and she goes to find a drink. She finds Ray’s head in the fridge and freaks out, asking him what he is. He’s not able to provide any answers, and she runs away, back to Montana. Montana knocks Brooke out. When Brooke awakens, Montana kicks her in the gut and tells her about her plan for revenge. Brooke manages to stab Montana in the leg with a knitting needle and runs away. Mr. Jingles tells Donna that she shouldn’t have brought him here, and she agrees. She asks him to kill her, but he refuses, saying he only has one left to kill. Montana searches for Brooke and eventually finds her, pouncing on her. Mr. Jingles comes at Margaret, but Xavier fills him full of arrows, saying that he cooked up his worst nightmare in that oven. However, Margaret thanks Xavier by killing him herself. Brooke finally gets the upper hand and kills Montana, but the school bus full of campers pulls up to see her stabbing the body. Margaret blames all of the violence on Brooke, leading to her arrest. Ray rushes to one of the paramedics asking for help, but she quickly finds he has no heartbeat. She puts him in the ambulance, but he simply re-materializes outside, being stuck in the camp. Montana shoots one of the police officers, and states, “There is no Montana, only Zuul.” She tells Ray and the hiker that they’re doing purgatory wrong and could be gods in the camp. Ramirez and Mr. Jingles are shown in a car driving toward L.A.

The series’ aptly titled 100th episode surprisingly opens in 1985, with a woman in a hotel room getting up and asking her neighbor, Richard Ramirez, to turn the music down. He tries to pull her into the room, presumably to kill her, but Jingles intervenes, and Richard releases her. Jingles is tired of “living like an animal” and listening to Billy Idol all the time. However, Richard tells him to get over it and do Satan’s bidding. The episode returns to 1984, with the two driving around. Richard goes into a store, and Jingles blows his cover to the people around, leading them to chase him. The episode cuts to 1989, and a man is bird-watching near the camp. He stumbles upon a cabin covered in red paint, spelling out “Brooke wants your blood,” and Montana, who proceeds to flirt with him and then kill him. The ghosts of the original counselors are bored with all the violence, but Xavier is impressed and kisses Montana. Lifestyles of the Rich and Famous airs an episode based on Margaret, now a captain of industry and married to Trevor, who miraculously survived the stab wound she dealt him. The two argue about the ethics of what Margaret has done. They start getting ready to have hate-sex as Margaret’s assistant comes in and announces that Brooke has lost her last appeal and will be executed. In jail, Brooke is haunted by Richard Ramirez, who is being held in the same facility. Ray hates Brooke and Xavier’s violence, tries in vain to save people from them, and is indignant upon learning of Brooke’s situation. Nonetheless, the other two torment him and kill another innocent camper.

Back in prison, Richard Ramirez offers to save Brooke from the lethal injection if she’ll serve his master. However, she turns the offer down flat. One of Margaret’s deals falls through, the third in a few months, according to her assistant. Trevor storms in, announcing the deaths at the camp, and Margaret’s assistant suggests they sell the business. However, she thinks this will be good for business. Meanwhile, Jingles is feeding his baby, and tells his wife about feeling like he doesn’t deserve a family. He leaves for his job at VideoShack; he informs her that he’s up for a promotion. At Camp Redwood, Margaret announces a rock and roll festival to be held there. Jingles and his wife see this announcement on TV, and she goes to change it, but he assures her that he’s over it and feels nothing. In prison, a woman comes to meet Richard and tells him about the concert; Billy Idol is going to be there. Richard says he has to do something big so he can stay relevant instead of being left in the 80s. The guards go to get Brooke, and a priest offers to do Brooke’s last rites, but she declines, apparently blaming God for her situation. Richard again tries to win her for Satan, but she rejects that as well. In his cell, Richard performs a ritual to summon Satan while Brooke calls out Margaret in her final words, telling her she’ll burn “for wanting to watch (her) die.” Just as they prepare to inject Brooke, Satan comes to Richard in a guard’s body. Brooke is pronounced dead, much to Margaret’s delight. Jingles arrives home to find his wife dead. He leaves his son on his sister-in-law’s porch, telling him goodbye and returning to his former life to confront Ramirez. Back at the jail, Donna wakes Brooke up and welcomes her back to the land of the living.

This is a really wild pair of episodes. Donna’s backstory with her father is understandable, though it hardly justifies her choice to release an alleged serial killer. It’s an intense moment when both her father and the Nightstalker try to convince Donna that she should be a killer, though I’m glad it looks like she won’t do so. Although “True Killers” revealed Margaret as the real killer, “Red Dawn” gives her more opportunity to show just how brutal she really is. Her choices to kill the innocent Chet, Xavier, and Trevor, even though the last two saved her life, are really despicable. She’s becoming an excellent villain, and I can’t wait to see what they do with her. It was satisfying when Brooke killed Montana, but equally frustrating was what happened to Brooke as a result. This girl just can’t catch a break, and Margaret framing her again highlighted what a witch she is. I figured Ray wouldn’t be able to leave the camp, just like the hiker and other ghosts, but it was a cool reveal nonetheless. The Nightstalker and Mr. Jingles teaming up and driving away together was equal parts cool and unsettling, regardless of the events of the following episode. 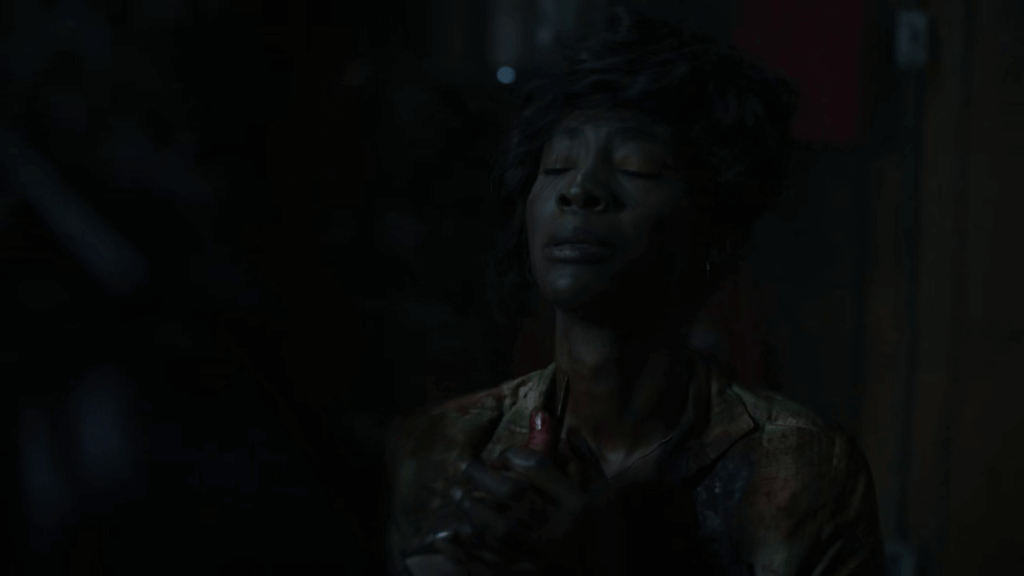 “Episode 100” is an even crazier ride, and worthy of its place in the AHS canon. Everything plays out perfectly with Mr. Jingles and Ramirez. The only thing is, I wish John Carroll Lynch was given a couple more seconds to show Jingles processing his feelings/reaction when he finds his dead wife. I feel like this scene was a little rushed, which is disappointing, since it represents the destruction of his new, perfect life, and his return to his old ways. Regardless, it’s a compelling story beat. I also liked it when Jingles warned the people at the market about who Ramirez was, with the scene after that point playing out pretty much how it did in real life. These two and their adventures are my favorite part of 1984 right now, and I can’t wait to see how it concludes. Seeing what has happened with Margaret in the intervening years is really infuriating, and at first, I thought Trevor must be a clone or someone else in his body. Surely there’s no way he’d play house with his almost-killer. But sure enough, he was just money hungry enough to do so. I didn’t expect that from this character. However, I kind of like this messed-up, toxic relationship between the two, and I’d be lying if I said I wasn’t eager to see where it leads. I think Margaret’s audacity is misplaced when it comes to returning to the camp for this bash she’s throwing. The place is full of ghosts who blame her for their deaths, and I somehow doubt that’ll go over very well for her. I imagine there’ll be some type of righteous revenge against her on Brooke’s behalf as well. I was figuring they wouldn’t kill Brooke for real, but I was surprised that Donna was the one to save her. I wonder how she made her appear dead, but I’m sure that’ll be explained next week. The coupling of Montana and Xavier is really intriguing, and I wonder if this means he’ll be a villain too now. Being that Chet and Ray are still shown as somewhat sympathetic, I’m really curious to see what’s planned for them for the rest of the season.

As usual, the music, visuals, and costumes are fantastic for both episodes. Mac Quayle’s musical score for this season just gets better and better as the story intensifies, and the hair and make-up were really fantastic in these episodes. The series’ quality has fluctuated a lot throughout its run, but the technical aspects are always on point. Overall, I think “Red Dawn” and “Episode 100” are both great episodes. At times I was wishing that characters had a little more quiet time, especially Mr. Jingles, who really shines in both episodes. However, the acting is phenomenal throughout, and the story is coming together in exciting and unexpected ways.