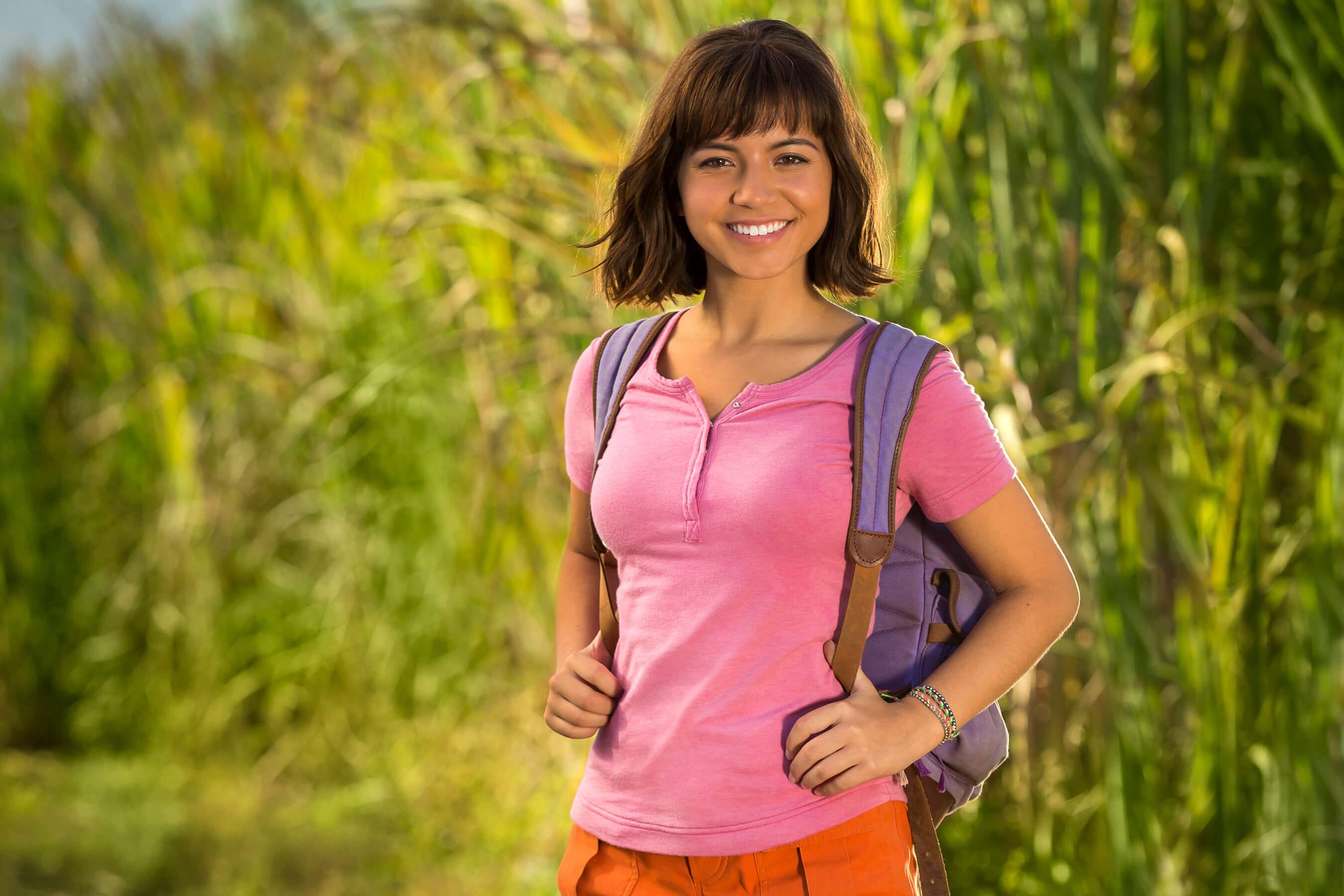 We live in an age where, if something is popular, it’s likely to get a movie, no matter how well or not it might translate. The latest example of this is Dora and the Lost City of Gold. For those who don’t know, Dora the Explorer is a popular Nick Jr. show about a little girl named Dora who goes on adventures with a monkey named Boots. She often breaks the fourth wall to get the audience involved with solving puzzles and teaching them Spanish words. This premise does not lend itself to a movie adaptation at all, but my curiosity got the best of me, and I watched it. The best compliment I can give it is that it’s better than I expected.

Dora and the Lost City of Gold follows Dora, a girl who lives in the jungle with her parents. As her parents go out on an expedition, they send Dora to the city to stay with her cousin Diego. While in the city, Dora has to navigate her way through high school for the first time. During a school trip, Dora and her friends are kidnapped by treasure hunters in an attempt to find her parents and the lost city of gold. Now Dora and her newly made school friends must save the day.

The story is as ridiculous as it sounds. I do appreciate that the writers understand exactly how ridiculous it is. The overly emotional moments are scarce in favor of showcasing how hilarious a character Dora is. My favorite part of Dora and the Lost City of Gold is the small amount of time spent with Dora in high school. She has no idea how to be anybody but herself, so typical high school behavior doesn’t mean anything to her. To the other students, she’s a weirdo, but that never stops her. “Be yourself” is a timeless moral that will always have its place in films, even if there are a million out there that execute that idea better than this one does.

Nothing in this story is going to surprise you. Dora and the Lost City of Gold is a kid’s adventure movie that, at times, feels like Tomb Raider for five-year-olds. The villains are Looney Toon levels of over the top, and there’s even a fox named Swiper that does his best Looney Toon impression. The villains try to be funny, and the humor misses 100% of the time. This would’ve been a better movie if there were no goofy villains in the jungle, and the focus remained on high school.

The one saving grace of this trainwreck is Dora herself. I enjoyed how they base most of her humor around making fun of the cartoon. This version of Dora is very similar to the animated Dora; she is overly positive and oftentimes breaks into song to get herself through a situation. There’s even a moment where she’s talking to her parents and randomly looks off to the side to address a non-existent audience. I found those moments especially funny. 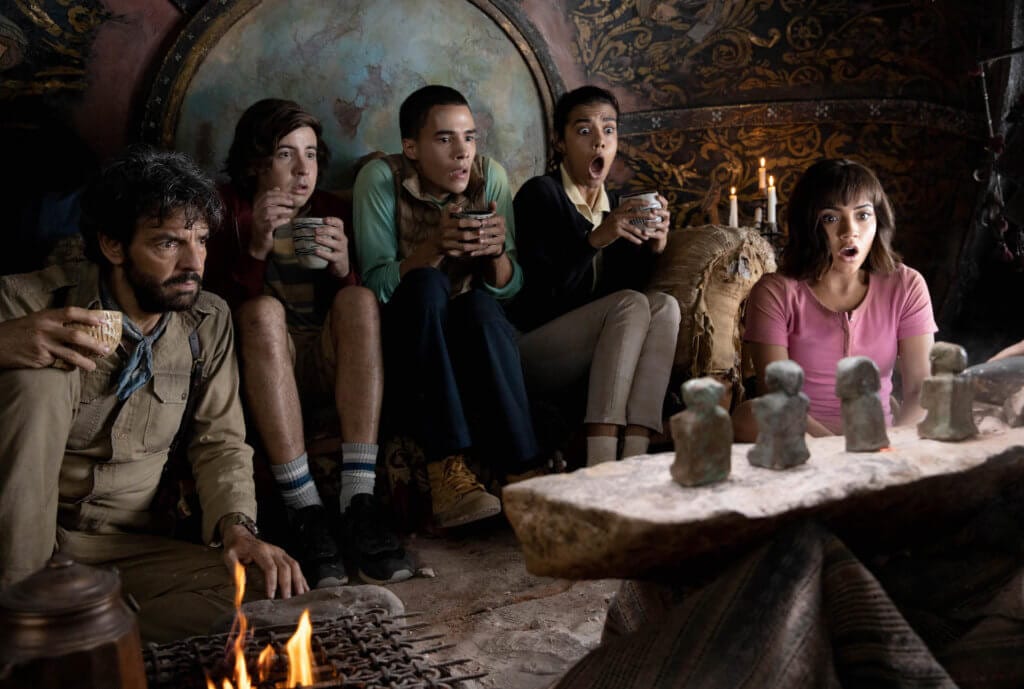 It’s effective because of the performance Isabela Moner gives as Dora. She brings so much enthusiasm to the role that I found myself enjoying parts of Dora and the Lost City of Gold I would normally hate. To maintain that level of excitement through the entire movie is impressive. She looks like she injected caffeine directly into her veins before shooting each scene. Her supporting cast ranges from mediocre to absolutely terrible, so it’s on her to make the scenes work. There is still a decent amount of cringe in her performance, but every moment of the movie I did enjoy was because of her.

It looked as if the director tried to make a competent film. A lot of Dora and the Lost City of Gold is shot fine; it’s just distracting whenever a CGI animal shows up. Some of the animals are CG when they don’t need to be. There’s a scene at the beginning where Dora is wearing a snake around her neck. Why not just get a real snake? Also, the animals from the cartoon are characters. Boots looks hideous, almost like the Aipom looked in Detective Pikachu, but with a smaller budget. The only thing good about Swiper is that he’s voiced by Benicio Del Toro. Other than that, he’s a Looney Toons ripoff that couldn’t even get a smile out of me. 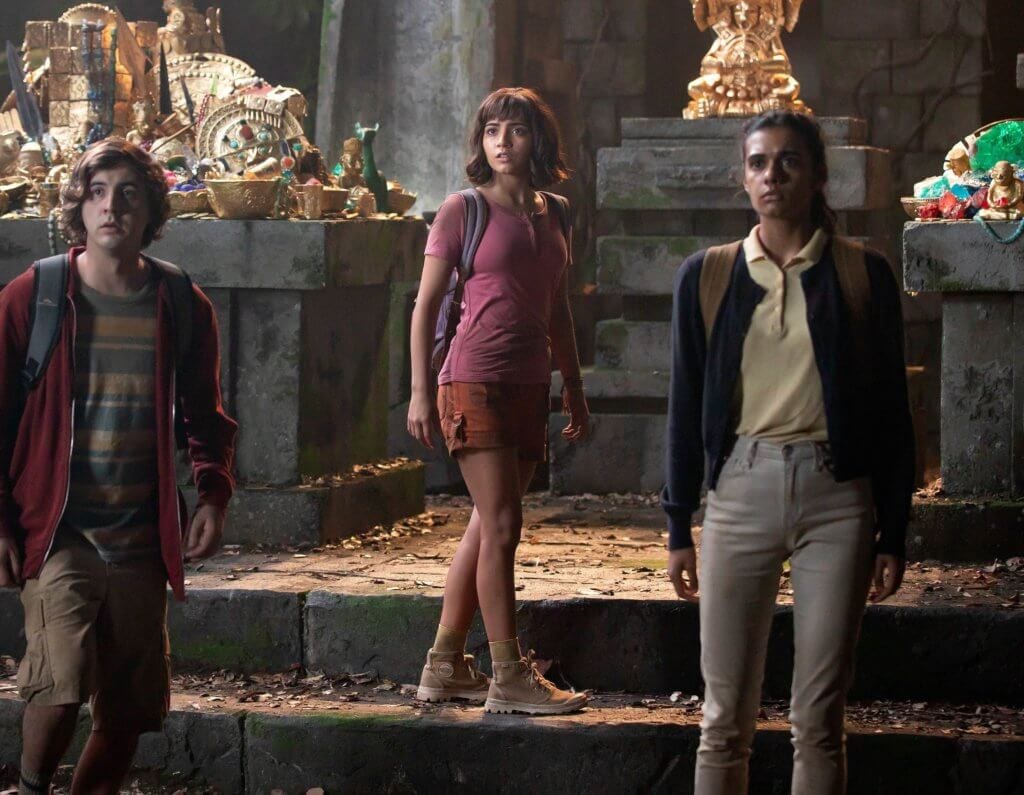 The script is also hilariously bad. I understand Dora and the Lost City of Gold is geared toward children, but that doesn’t mean you should insult their intelligence. The characters are one-dimensional high school archetypes that have no distinguishing qualities. Diego is the jock that’s embarrassed about his weird cousin, and Sammy is the bossy know-it-all that feels threatened by Dora. Then there’s Randy; Randy is your typical high school loser, equipped with an annoying voice and the ability to hold his breath for seven minutes. These are the type of characters we’re dealing with in this movie. The dialogue between them is flat and predictable. Diego tries to get Dora to stop being really weird, Sammy makes fun of Dora for being really weird, and Randy tries to get Dora’s attention by being really weird. Somehow, the villains get the even worse dialogue.

Dora and the Lost City of Gold is an example of a movie that should not have been made. I’m glad it was because I’ll be able to look back at it and say that it’s still a better movie than Hellboy. There aren’t many positive aspects to highlight besides and energetic performance from Isabela Moner. She manages to get a few good scenes out of a script that makes Michael Peña look like he has no idea how to do comedy. Despite all of my complaints, Dora and the Lost City of Gold blew away every expectation I had. It’s not the worst movie of the year, so when the end credits hit and the characters broke into song and dance (yes, I’m serious), I didn’t feel like I wasted my time. I can only recommend this to people who want to watch a bad movie they can laugh at. For everyone, please don’t.

Dora and the Lost City of Gold

Dora and the Lost City of Gold is entertaining for all of the wrong reasons. It's a trainwreck that manages to find a few moments of comedy that work.