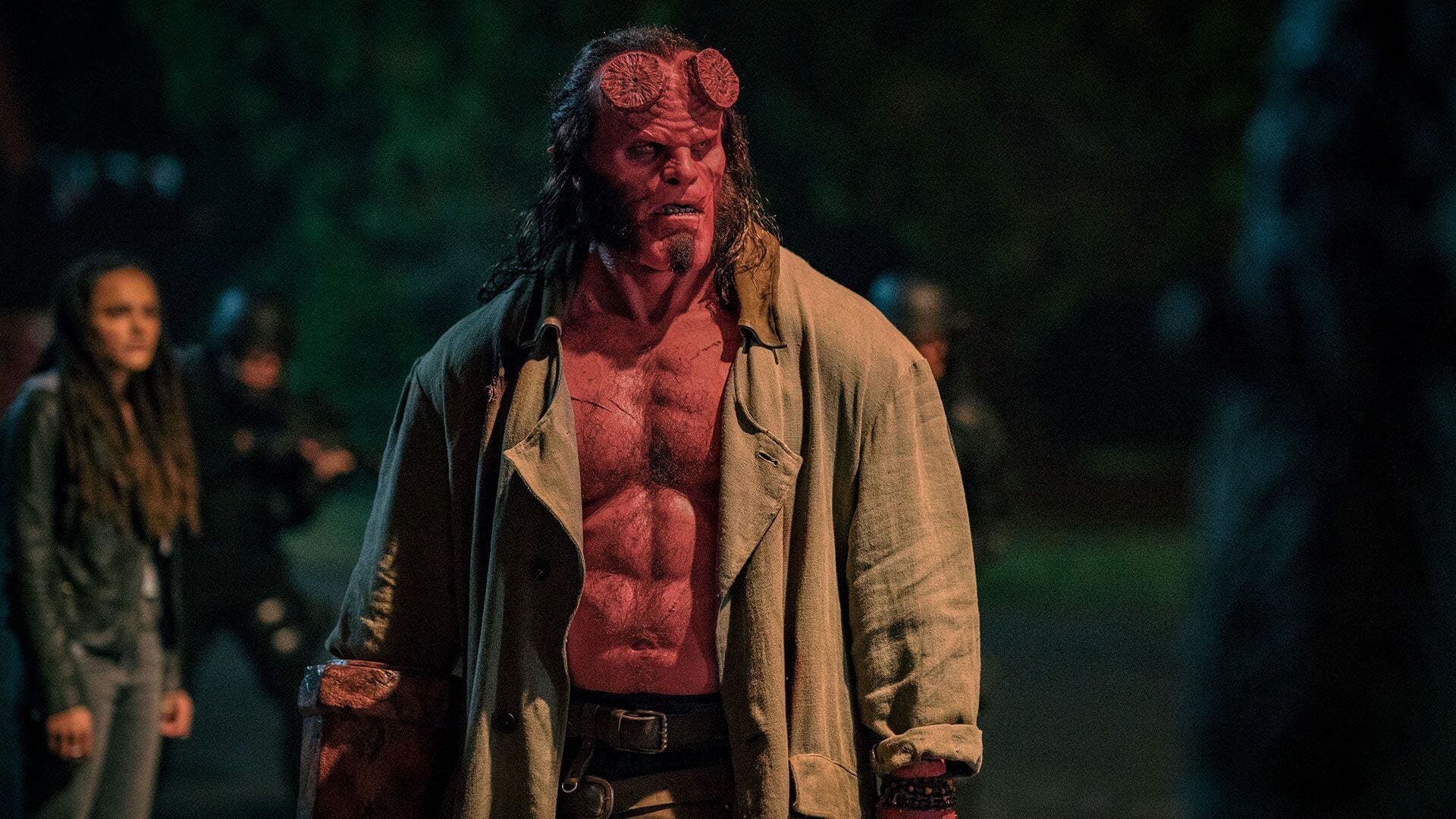 Comic book movies have steadily improved over the years. Every once in a while we might get one that falls flat, but very rarely will we one be as embarrassing as some of the comic book films of the mid-2000s. This year alone we’ve already gotten movies like Glass, Captain Marvel, and Shazam! These are three very different films that provide unique experiences for the audience. They all have flaws, but they bring something to the table that can contribute to this ever-growing genre. Hellboy is a different case entirely; Hellboy exists only to remind us how not to make a comic book movie.

The writing in Hellboy is so poor that it’s hard to make out exactly what the story is supposed to be. There are at least three different plot lines this movie could’ve followed, but they decided to go with the least interesting one. A long time ago, King Arthur and Merlin stopped the Blood Queen by dismembering her body and scattering it across the land. In the present day, a pig monster is attempting to gather her body parts to revive her. Hellboy works for the Bureau of Paranormal Research, which means he eliminates occult, paranormal, and supernatural threats to humanity. Now, he must stop the Blood Queen while preventing the prophecy of him causing the end of the world from coming true.

From the very first scene of this film I knew I was in trouble. Hellboy starts off showing how King Arthur defeated the Blood Queen. It reminded me of Transformers: The Last Knight, which is a movie to which you never want to be compared. From there, it doesn’t get any better. A lot of the film is spent sending Hellboy to different locations to handle situations that have almost no significance to the main story. This wouldn’t be so bad if they didn’t completely fail at showing us the passage of time. It’s like the writer knew that he wanted Hellboy to be somewhere, but had no idea how to get him there realistically.The writing is one of the weakest aspects of the film. The dialogue is shallow, and the exposition is often dumped on you randomly. There are also reveals that don’t feel earned at all. Alice is a character with the ability to channel spirits; during a fight, she magically realizes that she also has the ability to punch the spirits out of her enemies. There’s no explanation other than Alice casually mentioning that weird stuff happens to her all the time. It’s an awkward moment and a plot convenience that doesn’t make any sense.

The direction is basically non-existent in Hellboy. The camera shots are ugly, the CGI looks like it could’ve been generated from a PlayStation 2, and the action is uninspired. I don’t know why they used so much CGI when it’s such low quality. There’s a fight between Hellboy and three giants that looks atrocious; the director clearly wanted this to be a fun action sequence, but it falls flat because the camera angles don’t make sense and the CGI is distracting. The other fight scenes aren’t much better; there’s an overabundance of gore in these fights that feel like a crutch the director is using because he couldn’t choreograph coherent action sequences. It saddens me to say that because Neil Marshall has proven himself to be a competent director in the past. The Descent is a great horror movie that uses claustrophobia as a way to scare its audience. Hellboy doesn’t feel like it was made by that director.

A special award goes to the Hellboy editing team for doing the worst editing job of 2019 so far. This movie was butchered in the editing room, to the point that it’s completely incoherent at times. The action sequences have so many cuts that I got a headache midway through. I was baffled by how many cuts there are during the dialogue scenes. A lot of times it was easy to tell that this was done to mask the mediocre ADR dubbing. The pacing is also all over the place. Most of the movie feels rushed, and the moments that aren’t drag on for way too long. The third act, in particular, has a lot of these moments. There’s a scene where Hellboy is supposed to be struggling with an inner conflict, but it’s edited together so poorly that none of his struggle translates to the screen. It’s the most important scene to get right, and it ends up being one of the most uneventful scenes in the entire movie.

Most of the acting is also mediocre. A lot of the fault goes to the writer and director for not giving the actors much to work with. David Harbour as Hellboy has moments where it’s obvious he was the right choice, and I enjoyed his performance for the majority of the first act. As the movie progressed, Hellboy just starts cracking a lot of jokes that don’t land. David Harbour is not good at delivering comedy; only a handful of jokes even got a chuckle out of me. Sasha Lane and Daniel Dae Kim as Alice and Ben are extremely forgettable. Even Ian McShane is underwhelming as Professor Broom. Milla Jovovich as the Blood Queen is horrendous. She’s so over the top compared to everyone else that it reminded me of Elizabeth Bank’s performance as Rita in Power Rangers. I wanted to skip every scene she’s in.

Hellboy isn’t ready to be shown to audiences. This is a botched project that deserves to flop. There’s no excuse for the number of issues this film has; it feels like three different movies stitched together by an editing team that didn’t care. They saw what they had and created a Frankenstein monster. Del Toro’s Hellboys are a lot of fun because of the charismatic performance from Ron Perlman and the visual flair that Del Toro often brings to his films. A lot of the visuals in Marshall’s Hellboy look like they were trying to tap into that aesthetic and completely failed. It’s laughable to think that they expect Hellboy to get a sequel. Don’t waste your money on this; it’s not worth the disappointment.

Hellboy is a throwback to comic book movies we hope to forget. Poor direction, editing, and writing makes this movie unwatchable.