2019’s Knives Out was a surprisingly enjoyable follow-up from the guy who killed Star Wars. The all-star cast, witty script, and whiplash-inducing twists made for a unique viewing experience. I don’t usually feel strongly one way or another about mysteries, but a really exciting one can hook me. There’s something electrifying in the way Knives Out uses comedy to enhance the plot’s turns. The cast was also utilized in interesting ways, such as Ana de Armas playing the timid nurse or Chris Evans as the asshole trust fund baby. Naturally, I was excited about the prospect of more adventures with Daniel Craig’s Detective Benoit Blanc. Like director Rian Johnson, Craig should be steered away from franchise fare and towards more quirky work. He owns this role and is very adept at physical and verbal comedy! I was somewhat surprised when the series’ continuation was picked up by Netflix, and made sure to book a ticket for the limited theatrical run. Grab your puzzle boxes because we’ve got a murder to solve!

Eccentric billionaire Miles Bron (Edward Norton) sends puzzle boxes to his closest friends, inviting them to his private island for a weekend getaway. When they arrive, it becomes clear that there’s more at play here, and none other than Benoit Blanc shows up! Who will die, who did it, and why? Can Detective Blanc solve the case in time?

It would be a challenge for anyone to follow up a cast as stacked as that in Knives Out. How do you go on after Christopher Plummer, Jamie Lee Curtis, and Michael Shannon? I get the impression that, in casting for Glass Onion, they aimed for talented but less-iconic performers. This pays off in spades, as every actor is perfectly suited to their role. Dave Bautista plays the big dumb guy, but don’t worry; there’s more to Duke than that. Kathryn Hahn is Claire DeBella, a local politician with admirable platforms hiding less-than-honorable aspirations. Leslie Odom, Jr. (who I was thrilled to see!) plays Lionel Toussaint, a scientist in the pocket of Bron’s corporation. Kate Hudson is Birdie J., a former fashionista who now makes headlines for being racist – and I mean actually racist, not the Twitter “microaggression” kind. Her assistant Peg (Jessica Henwick, Game of Thrones) tries to keep Birdie out of trouble, to middling results. Daniel Craig is even funnier in Glass Onion than in Knives Out, but I think Janelle Monáe steals the show as Andi Brand. Brand is Bron’s former business partner who got shut out when she opposed a new product. I won’t get into that much here, but the point is that she got ripped off because she wouldn’t play fast and loose with safety and the law.

Monáe’s role as Andi is a highlight of the film because she gets a couple of big “mic drop” moments, usually at Miles’ expense. She has to display a lot of versatility in this role which really surprised me; I know Monáe more for her music than her acting. The dialogue is clever and lightning-fast, just like the first one. I think I still like Knives Out more, but my husband (who absolutely loves Knives Out) thinks Glass Onion is on par with it. The visuals are to die for, especially Bron’s mansion when they get to the island. It’s gorgeous and a little bit absurd, too, which goes along with his character perfectly. We also briefly see the inside of Benoit Blanc’s home, and hilarity ensues. I also appreciate the film’s unique cut and split-screen effects. This is especially neat near the beginning. The original musical score by Nathan Johnson isn’t going to be stuck in your head, but it serves the story’s emotional beats well enough. Johnson is the cousin of director Rian Johnson and also composed for Looper and Brick. I waited the whole movie to hear “Glass Onion” by the Beatles, and of course, it plays over the end credits. By the way, don’t wait for an end credits scene because there isn’t one, although I still like to watch the credits and see who was involved in the production. 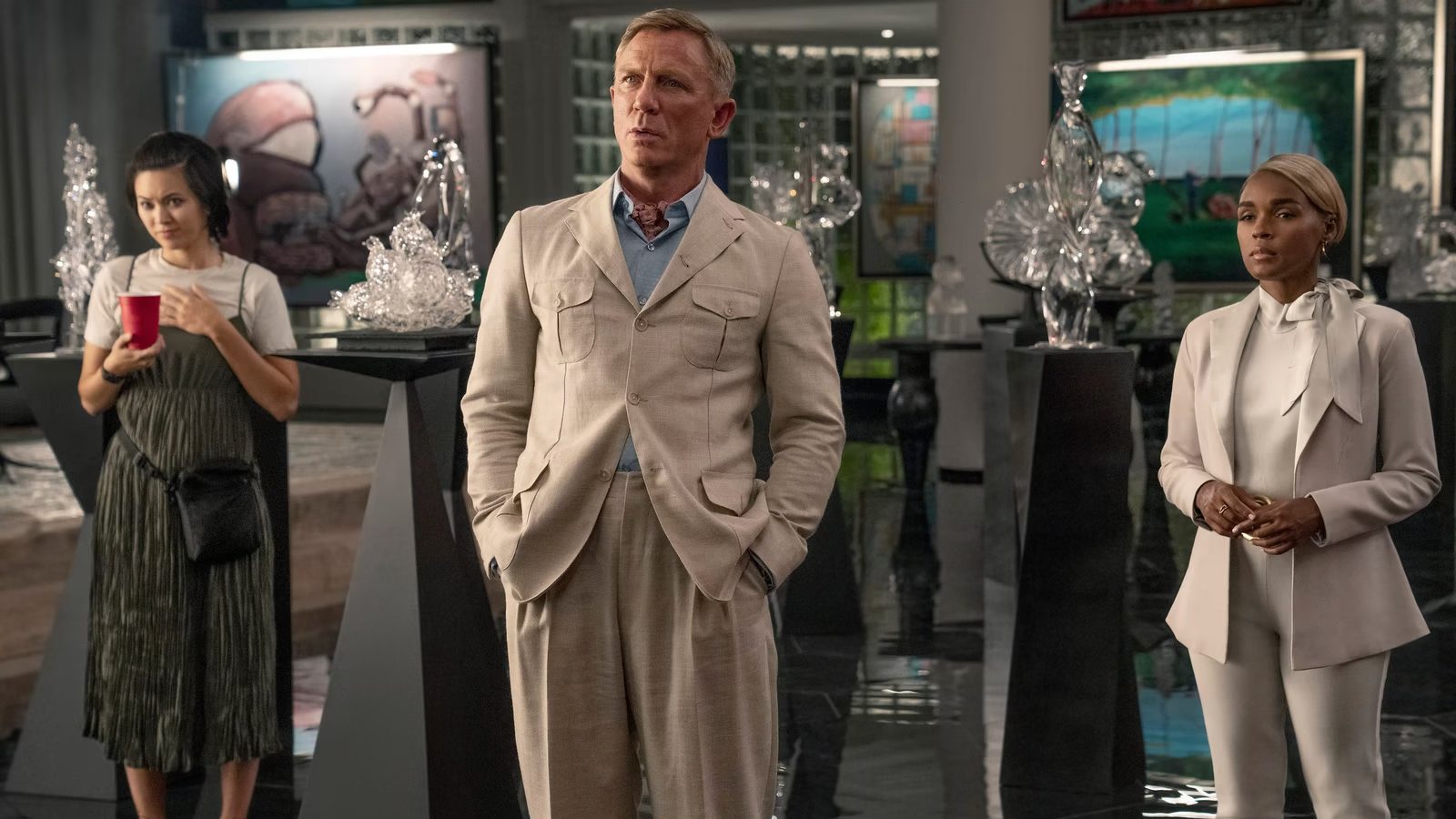 As for the central mystery, it’s just as twisty as the murder in Knives Out. Not only was I unable to identify the killer, but I was also wrong about who ultimately got killed. Rian Johnson needs to be kept away from Star Wars and similar series at all costs, but the guy can write a book and a shocking mystery. It’s not all that relevant, but every time I talk about Knives Out or Glass Onion, everybody mentions The Last Jedi and how much they hate Johnson. I detest that movie and never want to watch it again, and I totally get why people feel that way. I have mixed feelings about Johnson as a filmmaker, and I fault Lucasfilm for looking at his rap sheet and thinking there was anything there that indicated he was the man to direct a Star Wars feature. Regardless, I thought Knives Out was a superbly crafted mystery-comedy, and I refuse to let The Last Jedi run my life. I want to enjoy movies above all else, and a turd I saw half a decade ago isn’t about to stop me; it hasn’t even stopped me from loving Star Wars when done right. I understand the opposing point of view and don’t want to convince anybody of anything. I just hear this come up often enough that it seems worth exploring. Am I alone here? Any other Knives Out fans who hate The Last Jedi? A director doesn’t have to be all good or all bad; in fact, most are mixed bags.

Glass Onion: A Knives Out Mystery is a ton of fun at the movies. It’s only showing in theaters for a week, but I highly recommend getting out to see it if the opportunity arises. If not, it hits Netflix on December 23rd. This movie is funny, fast-paced, and packed with charismatic performances. It starts out a little slow and builds consistently from there, a great kick-off to the holiday movie season.

Glass Onion: A Knives Out Mystery is a ton of fun. It's funny, fast-paced, and packed with charismatic performances. It starts out a little slow and builds consistently from there, a great kick-off to the holiday movie season.