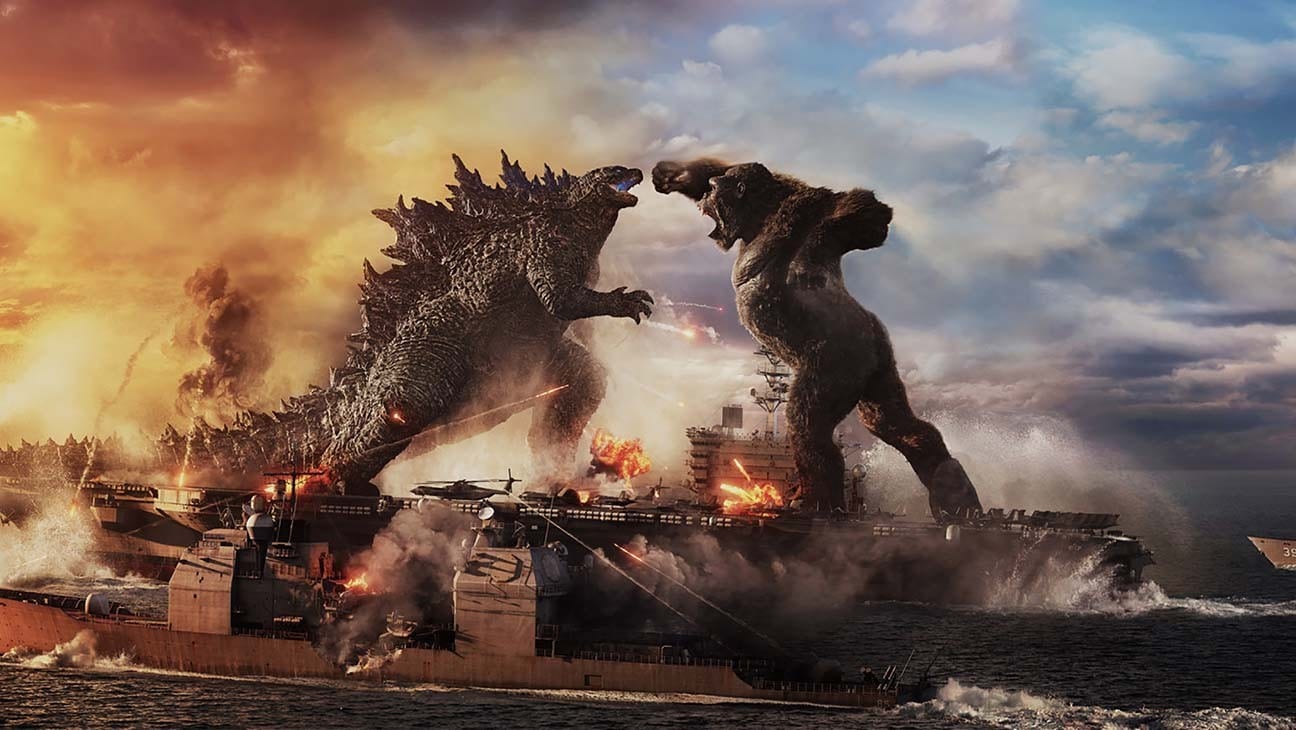 Godzilla vs. Kong is the best movie in Legendary Pictures’ MonsterVerse.  It isn’t great, and it gets some of the same things wrong that its three predecessors did, but it gets the most crucial aspect of these movies dead right. Go elsewhere for compelling characters or a decent story, but if you want some satisfying action and special effects, beautiful imagery, and a melding of a few different science fiction subgenres, buckle up.

An ominous corporation (do they come any other way in these pictures?) called Apex enlists disgraced geologist Nathan Lind (Alexander Skarsgård) to help them locate the entrance to the Hollow Earth and find the source of the Titans’ powers. For this, he convinces Ilene Andrews (Rebecca Hall), a Monarch anthropological linguist who leads a team that contains King Kong, to allow him to use the giant gorilla as a guide. Meanwhile, Godzilla attacks an Apex facility in Pensacola, leaving Monarch to assume humanity’s protector has turned on us.

The opening ten minutes of Godzilla vs. Kong establish what this movie will be, and they set the tone perfectly. The first scene is King Kong roaming Skull Island, effectively going through his morning routine. Then, after some humans who range from lifeless to pull-your-hair-out annoying deliver exposition and try pitifully hard to be funny, Godzilla rises from the sea and destroys stuff. This is how the rest of the film goes; Kong is endearing, Godzilla attacks, people signal it’s time to look at your watch. On its face, it’s the same as the other MonsterVerse movies, but Godzilla vs. Kong understands that the monsters are the main attraction, so the human side-trips are mostly integrated into the Titan action. It isn’t perfect; the narrative gets sidetracked with scenes featuring characters that don’t add much to the story and would have been better off cut from the film. And man, are these people dull.

For example, Nathan and Ilene are the new lead humans in Godzilla vs. Kong, and there’s nothing to either one of them. A glance at a magazine cover suggests they were once romantically entwined, but this is dropped even quicker than it’s alluded to, and they talk about nothing more than plot details for the rest of the movie. Ilene also has an adopted daughter named Jia, played by Kaylee Hottle, a deaf girl who is the last survivor of Skull Island’s native tribe. Jia has some kind of connection with King Kong and uses sign language to communicate with him; what this connection may be is never explained, and her kinship with Kong has no heart as a result. Certain moments between them are clearly meant to be touching, but they did nothing for me, and I’m a sucker for that kind of cinematic emotional manipulation. It’s also difficult to like these people because of the way they use King Kong like a tool, chaining him up and forcing him to participate in their quest while insisting that they love him. 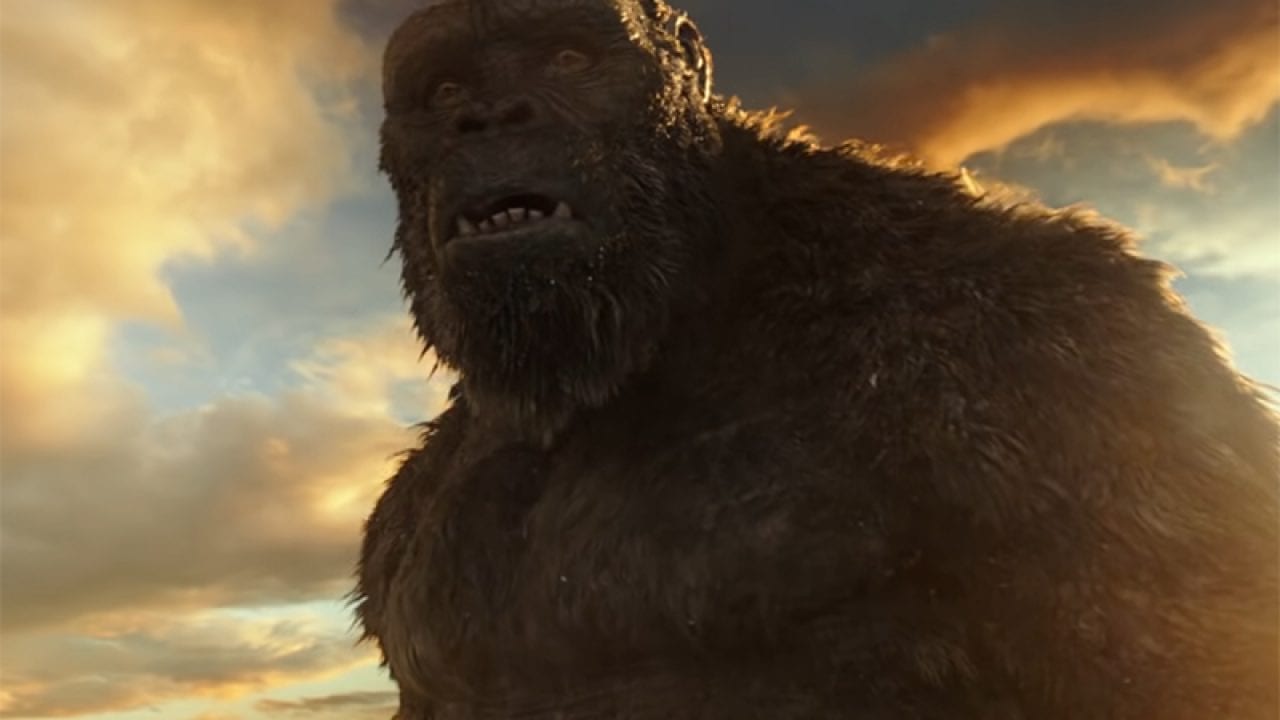 Elsewhere in Godzilla vs. Kong, there’s Millie Bobby Brown’s Madison Russell, returning after her tangle with him of the nuclear breath in Godzilla: King of the Monsters. She lifts right out of this movie, as do her obnoxious sidekicks, played by Julian Dennison and Brian Tyree Henry. Dennison is her best friend, who’s around to be a nerd and make Madison look cooler by default; Henry is a conspiracy theorist podcaster who has turned initiating eye rolls into an art form. These three function to uncover some plot points that are more naturally revealed through action. Kyle Chandler also shows up as Madison’s dad, who has now completely traded places with the idiot bureaucrats he chastised in his previous appearance. And there are the requisite corporate bad guys thrown in for good measure, as bland and forgettable as you’d probably guess. I like some of these actors, especially Rebecca Hall, but they have nothing to work with here.

But, thankfully, Godzilla vs. Kong is much more interested in its title characters, especially Skull Island’s resident champion. Godzilla fans may walk away disappointed because King Kong is the protagonist of the movie and gets the lion’s share of the screen time. It makes sense, as he’s heavily outmatched by his nemesis and needs to use his brain at least as much as his brawn when faced with the destructive force of the King of the Monsters. Kong is more of an audience surrogate than the humans, a guy who just wants to help but who’s in over his head despite having the best of intentions. And, remarkably, both Kong and Godzilla have character arcs; it’s a funny thing to say, but it’s true, and it’s more than can be said of the people. It’s that appreciation for the monsters that was missing from Legendary’s two Godzilla movies, and it’s done better here than it was in Skull Island (though that film had better human characters, if only marginally). 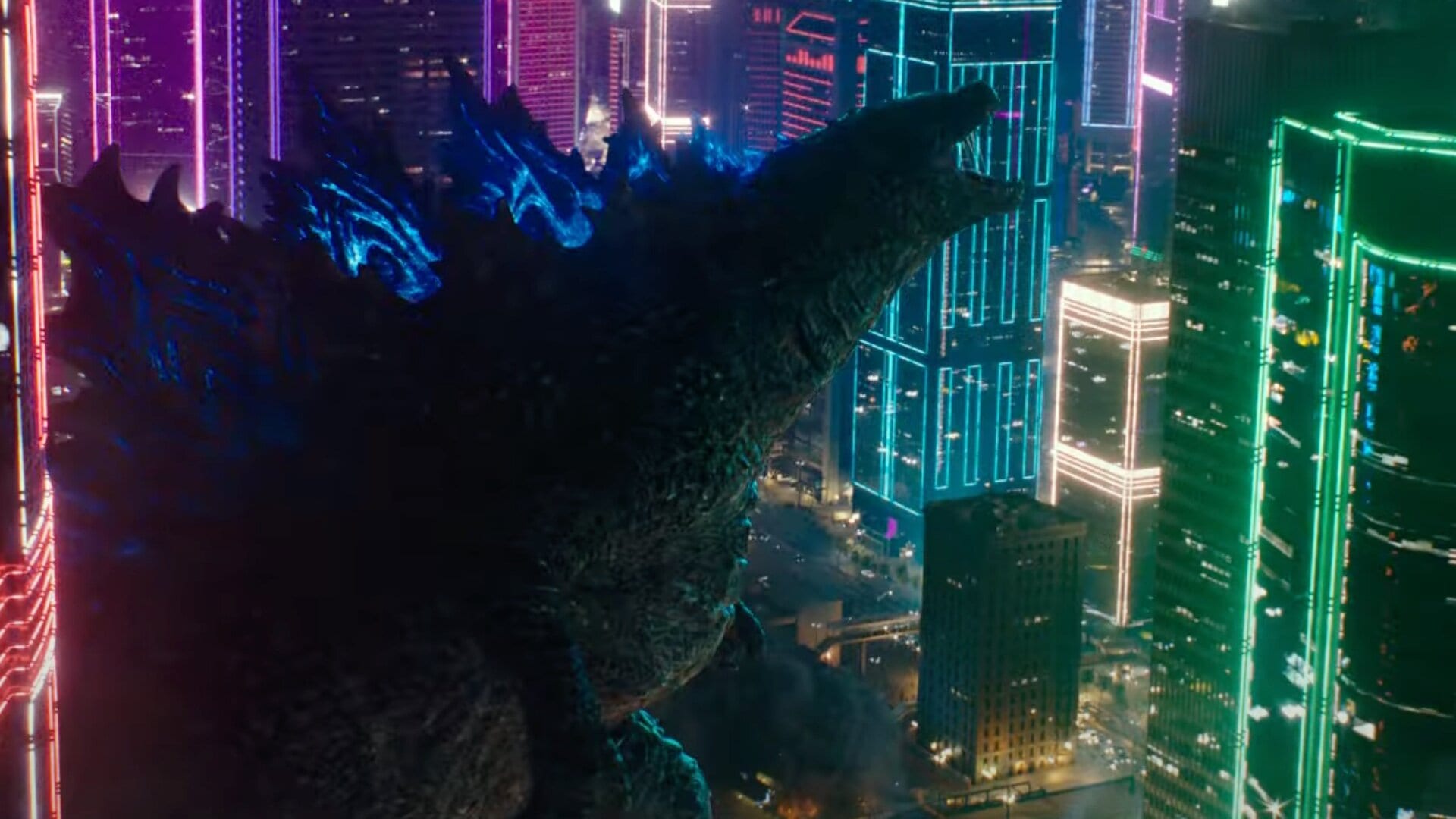 That appreciation is felt in the action as well. Godzilla vs. Kong has some fantastic monster fights, and unlike the pretentious Godzilla movies that came before, director Adam Wingard doesn’t cut away from the destruction to focus on a high school dance or some similar nonsense. There is one scene where he shifts to some humans, but they’re doing something related to the battle; I’d have much preferred they be ignored – and they easily could have been – but aside from that blip, the Titan rumbles are handled much better this time. The fights are tough and mean, with neither monster pulling any punches or going easy on his opponent, and Wingard gets some fascinating angles on the destruction; one shot is through an office building’s window as a creature is slammed through it (and a few other floors), and it’s both inventive and exciting. He shows great attention to detail as well, and it’s captured in the excellent special effects. Things like Godzilla’s breath changing with his mood or King Kong vomiting water after surfacing from underwater make the monsters feel real. There are also some beautiful shots of different locations that bestow majesty to the Titans’ world and emphasize their godlike stature, both literally and in the hierarchy of the animal kingdom. I’d love to see a movie in this world that takes a Lovecraftian approach to them; not that they need to be dark and bleak, but that they present mankind as insignificant and immaterial to the monsters.

But this is what we’ve got now, and it’s pretty good. Godzilla vs. Kong has a stock, predictable plot, and unlikable characters, but it scores big with the monster action that should be the draw of these films. The special effects are fantastic, and the filmmaking is the strongest this series has had yet.  You won’t feel any kind of human connection, but you’ll have fun.

Godzilla vs. Kong has a stock, predictable plot, and unlikable characters, but it scores big with the monster action that should be the draw of these films. The special effects are fantastic, and the filmmaking is the strongest this series has had yet.  You won’t feel any kind of human connection, but you’ll have fun.

As long as the human parts isn’t as unbearable as King of the Monsters, I’m good. It didn’t help that it was woke and 2 hours long.

The parts with Rebecca Hall and Alexander Skarsgård are just bland; they’re mostly inoffensive, but they barely qualify as characters. The parts with Millie Bobby Brown and her two idiot sidekicks are obnoxious. But this movie is definitely better than King of the Monsters. The monster stuff is a lot of fun, and well filmed.

I could not bare to watch anymore of this movie than i did. The level of “wokeness” was way overboard from the start (excluding the few minutes of the intro with Kong waking up).

By the time that the female (Young Girl) took over the car from the male (Young Boy) and knotted up her hair i was done with the intended subliminally (obviously those did not work on me) since they made such a big stink not long go about female character in movies and games having to have their hair knotted up “or else”, they were to feminine of course, by that time i already had more then my fill of this indoctrinating piece of junk.

I was unable to enjoy any of this and i did not finish it and i never will.

It’s terrible. None of the characters have charisma.