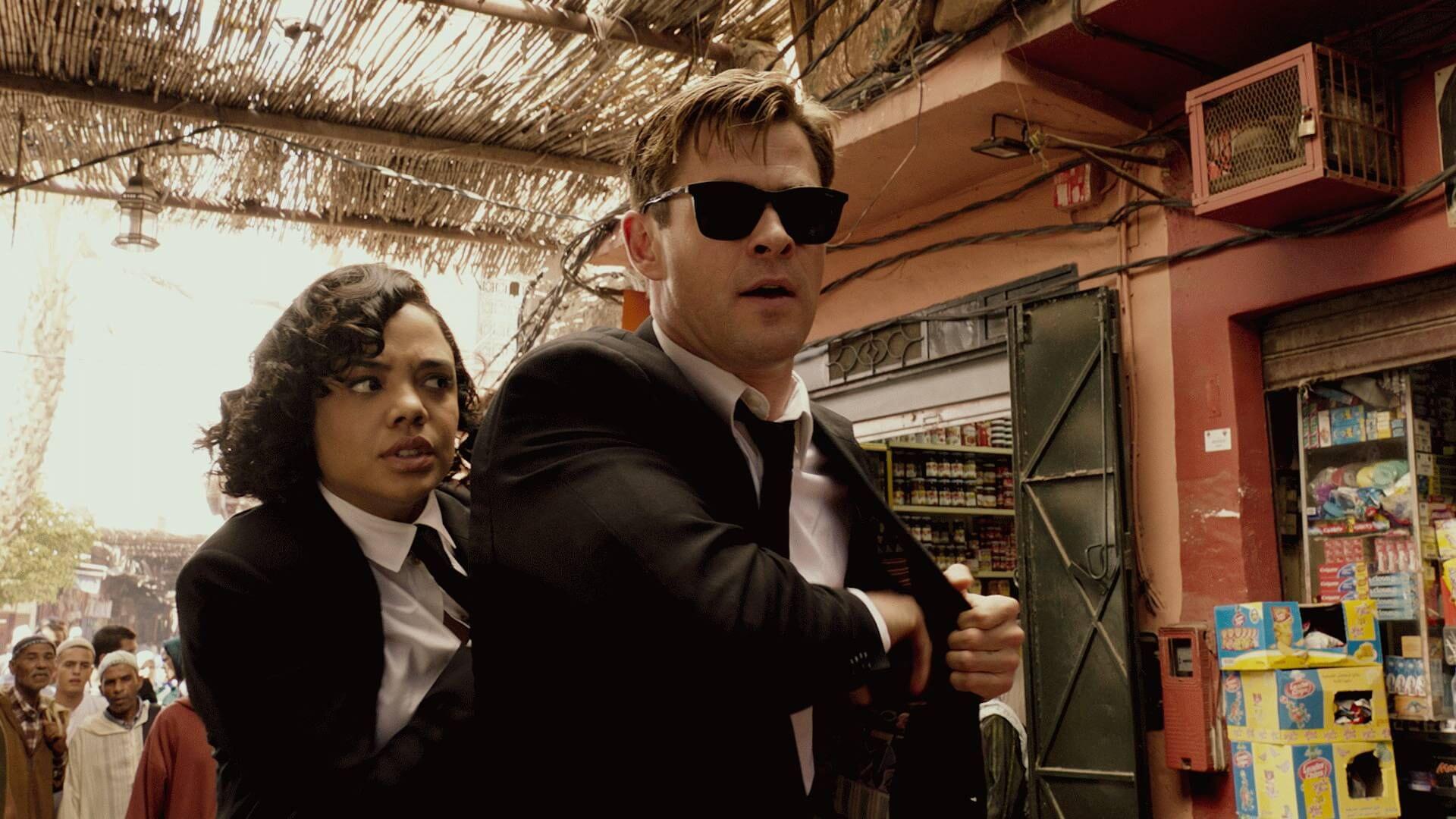 Men in Black: International is an unfunny comedy, a thriller that doesn’t thrill, a mystery with an obvious answer, and a science fiction movie with bad special effects. On top of all this, it manages to sap all the considerable charm out of Chris Hemsworth, a likable and charismatic star who deserves much better than this dreck. But the ticket taker gave me a complimentary pair of junky sunglasses, so I guess it wasn’t a total wash.

Ever since she learned of their existence as a child, Molly (Tessa Thompson) has been determined to join the Men in Black. As an adult, she finally tracks down their secret headquarters in New York City and convinces Agent O (Emma Thompson) to recruit her on a provisional basis. Rechristened Agent M and assigned to the London branch, she teams up with hotshot veteran Agent H (Chris Hemsworth) for a fairly routine mission that turns into a race to save the planet and uncover a possible traitor in the agency.

Men in Black: International is a comedy first and foremost, and at that, it fails miserably. None of the jokes land, with the exception of one line from H and M’s alien sidekick Pawny, and while I chuckled at the time, I don’t even remember what it was. This is the death knell for a movie that is determined not to take anything seriously. There’s a scene where H and office rival Agent C (Rafe Spall) trade barbs, and while it seems like inept improv at first, the rest of the dialogue is so bad that it could very well have been scripted. There’s nothing duller than a comedy that can’t make you laugh, and I don’t see anyone busting a gut at Men in Black: International.

It’s tempting to wish the bad jokes had just been eschewed for a more serious sci-fi mystery/thriller, but those elements of Men in Black: International don’t work either. H and M (Get it? Because, like, they’re in London) never feel like they’re in any danger because everything is so silly. They’re told by their boss, High T (Get it? Because, like, they’re in London) that Earth will be annihilated if they don’t show an alien diplomat a good time and get him home safely, but the weight of that doesn’t come across because it’s said in an off-handed manner, like it isn’t that important. And when everything goes wrong, nobody mentions Earth getting destroyed again; even the steep recompense the aliens demand is dropped. The action looks like a bunch of kids shooting each other with water pistols because all the guns are so over-stylized that they don’t even look like weapons, and they make goofy noises when fired. The special effects, on the whole, are subpar; they look like they came out of a twenty-year-old movie, with CGI aliens that don’t blend in with the actors or sets at all. In one scene, H has a tentacle dragged across his back and you wonder if he was spliced into a Disney animated film. And the central mystery is a bust because the identity of the traitor is so obvious only people who’ve never seen a movie before won’t figure it out as soon as the idea is floated. (And if Men in Black: International is your first movie, please come back. They get better; I promise.) 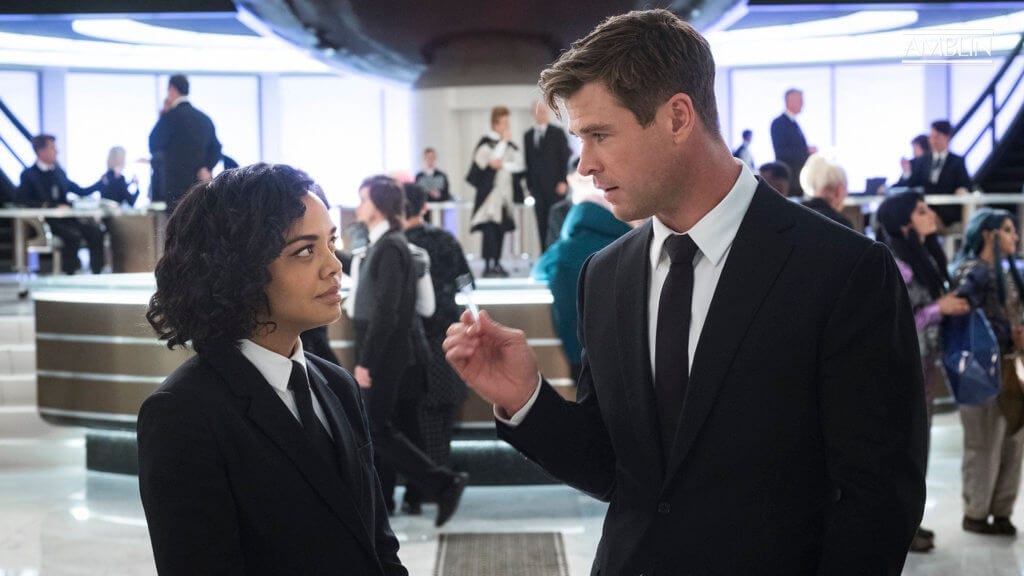 The characters in Men in Black: International are a bunch of cardboard bores. Chris Hemsworth does everything he can to make H a fun lead, but lifting Mjolnir is a cakewalk compared to running with this material. He has a sort of devil-may-care attitude that’s right for the part, but the movie can’t decide if that’s a good thing or a bad thing, and he’s constantly made a fool of so M can solve every problem. Speaking of whom, Tessa Thompson plays M all wrong, but it’s not entirely her fault. M, and Molly before her, has been obsessed with the Men in Black for years (despite her eye-roll-inducing issues with their name); she should be in a constant state of awe when she sees their inner workings, the ray guns, the aliens running around, the celebrities who are secretly from another world – the audience surrogate, in other words. But Thompson is too cool for school in every scene, and there’s no wonder or excitement to any of it. The star power of Liam Neeson and Emma Thompson as the elder statesmen is never capitalized on, and they mostly just deliver rote lines and lend their names to the poster. Neeson’s High T is supposed to be like a father to H, but they never have a scene where they relate to each other in that way; T is just every superior officer in every action movie.

In fact, Men in Black: International demystifies the entire MiB organization, making what should be an elite, intimidating government agency look like a pack of idiots. Molly finds the New York headquarters by getting in a taxi and saying, “Follow that car.” That’s right; the Men in Black can’t pick up on a yellow cab following them through Manhattan in broad daylight. They try to have the MiB save some face once she reaches their base, but why did she ever get that far? Later, when H and M go rogue, a veritable army of agents shows up to apprehend them, and a wild chase through the streets of Marrakesh ensues. Not once does it feel like our heroes could be caught, and that’s because the MiB are a bunch of clueless morons who are so obvious in their sting operation that a rookie who’s not even a full agent spots them. And for people who try to maintain a low profile, they sure do come out in force in a crowded marketplace. Much is made of what an embarrassment H has become, but are the rest of them really any better? The villains aren’t intimidating either; they’re complete ciphers who are supposed to be scary because none of the MiB’s weapons can hurt them, but they never do anything to demonstrate their powers or skills (except on the dance floor, because that’s what we want to see our bad guys do). 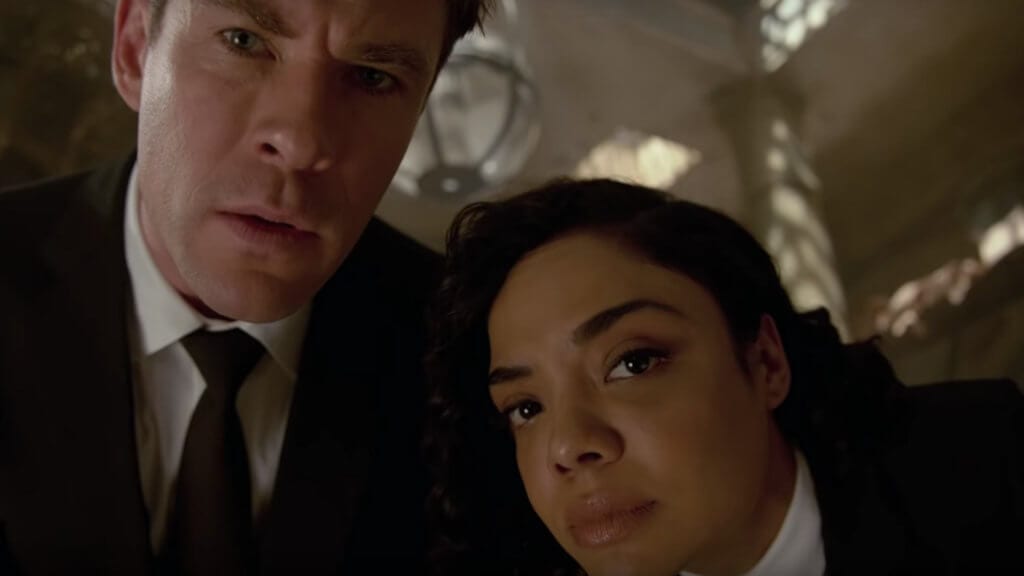 Thematically, Men in Black: International is a mess. It sets up an arc for M, where she realizes that the personal connections she avoided in her zeal to become an agent are the most important things in life, but she never seems to learn that. She’s all business right to the end. Other things happen in service of that theme, but they never gel. H talks about a woman he loved and throwing logic to the wind to follow your heart, but when she shows up there isn’t an ounce of chemistry, passion, or regret between them, and the whole thing is played for laughs (which never come). An early scene with Molly as a child has a nice payoff, but she learns nothing from it. I’m still not sure what H learned about his abilities as an agent, either. The movie tries to give an arc to Pawny, but it isn’t set up properly because of the insistence on having everything be a joke, so the payoff doesn’t feel earned. Every inch of Men in Black: International is disposable.

If Men in Black: International isn’t the worst movie of the summer, we’re in for some real trash in the coming months. The laughs are nonexistent, the action is boring, the characters are flat and inconsistent, the mystery is a no-brainer, the special effects are unconvincing, and poor Chris Hemsworth looks like he’s drowning in misery. If you pick another movie at random when you walk up to the box office, I can’t imagine you’ll have a worse time.

If Men in Black: International isn't the worst movie of the summer, we're in for some real trash in the coming months. The laughs are nonexistent, the action is boring, the characters are flat and inconsistent, the mystery is a no-brainer, the special effects are unconvincing, and poor Chris Hemsworth looks like he's drowning in misery.