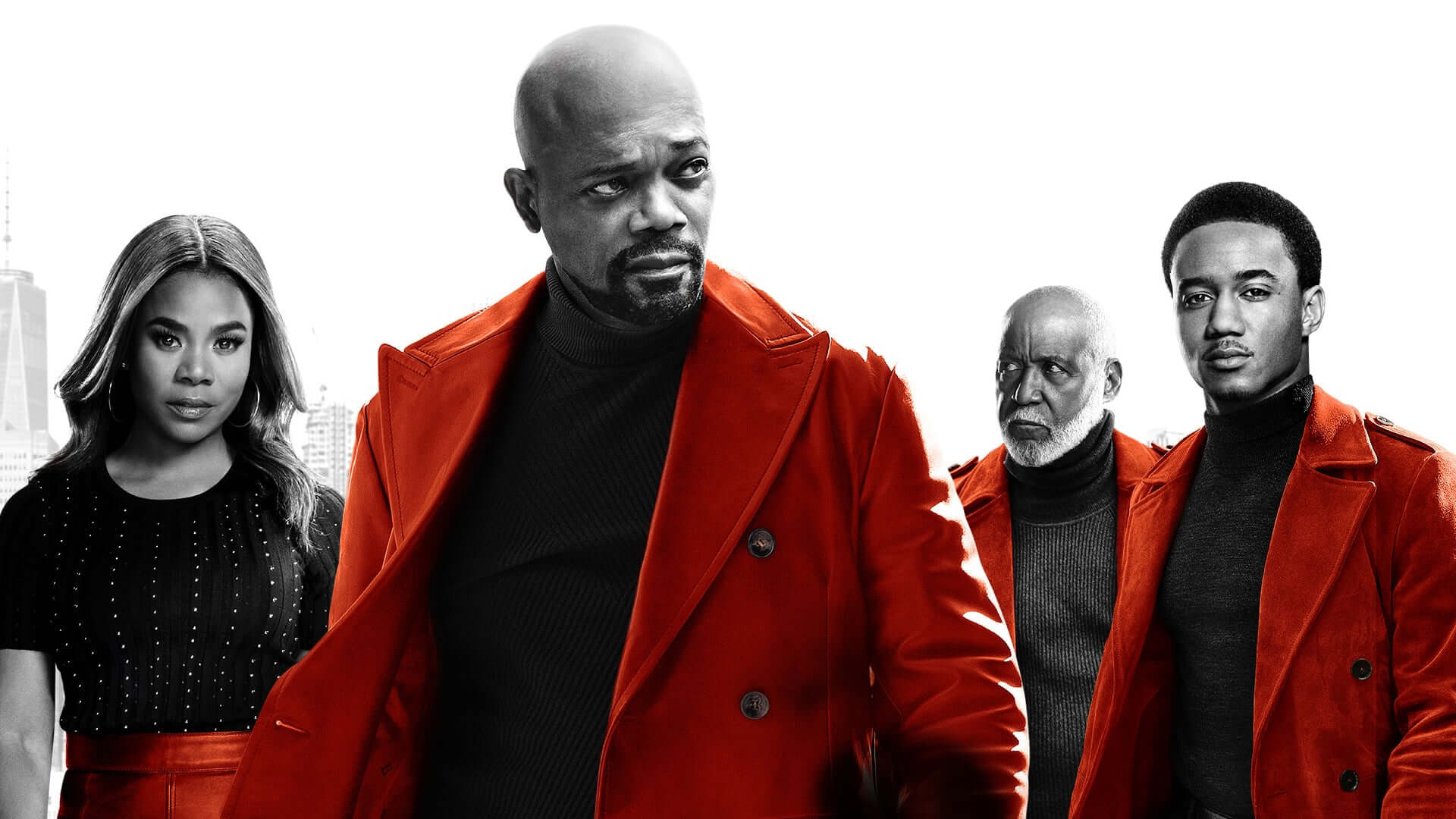 Shaft (not to be confused with Shaft or Shaft) is the type of movie you don’t expect to see anymore. Not only is it a celebration of traditional masculinity that tends to be absent from modern Hollywood’s output until S. Craig Zahler or Jason Statham decide to make a movie, but it suggests that boys need their fathers and that society’s over-feminization is destroying that crucial relationship. In other words, it takes risks in its themes, and it’s sure to receive a critical drubbing for daring to question the accepted party line. (Fun idea for a drinking game: scour the Rotten Tomatoes page and do a shot every time you see my new least favorite word, “problematic.”) But its message isn’t a lecture; it’s wrapped in a fun action-comedy with plenty of big laughs and Samuel L. Jackson owning the camera in the way only he can.

John Shaft Jr. (Jessie T. Usher), who goes by JJ, is a techie specialist for the FBI. When his former junkie friend dies of an apparent heroin overdose, JJ suspects foul play. Finding the police disinterested and himself ill-equipped to navigate the criminal underworld, he enlists the help of his estranged father, Harlem PI John Shaft (Jackson), to investigate the murder and bring the killers to justice. Bullets fly, barbs are traded, and Shaft tries to repair his fractured relationship with his son.

Shaft does what most movies featuring old-school characters do nowadays; it takes the archaic figure and drops him into the modern world. The difference here is, instead of beating us over the head with the notion that the world has left our hero behind, this film says that the world hasn’t changed as much as everyone thinks it has. JJ’s millennial sensibility – the one that he and everyone he knows believe is the way things are now – is a mask, a velvety veneer covering a world that wants its men to be men, that responds to strength and confidence, and that can’t hide what it really is when the going gets tough. Kids like JJ consider themselves evolved and scoff at what came before, but they’re so afraid of their own shadow that they can’t even cross the street without tripping over themselves, let alone get respect at work or, God forbid, talk to a girl. JJ works for the FBI and has no idea how to get information out of a low-rent punk. He’s utterly emasculated.

Once he tries to rectify the situation, however, his role in the story is revealed. JJ is the embodiment of the dishonesty inherent in woke modernity. He may wag his finger at his dad, but he knows Shaft can get things done when he can’t. He insists Shaft doesn’t know how to talk to women, yet gorgeous ladies are always fawning over him while JJ shuffles his feet in front of a girl and goes home alone. He argues for FBI protocol and going through proper channels, but he seeks Shaft’s help at the onset because he knows that will get him nowhere. And it’s when he begins embracing and practicing Shaft’s manliness that he starts getting what he wants. The kicker is that JJ’s ineptitude is really his mother Maya’s fault; if she hadn’t kept JJ from his father for fear of a masculine influence, he would’ve always been the man he needs to be. Shaft isn’t making up for lost time; he’s getting back time that was stolen from him. This is an angle of the absentee father you rarely see portrayed, but it’s an important one, and I’m glad Shaft went there. 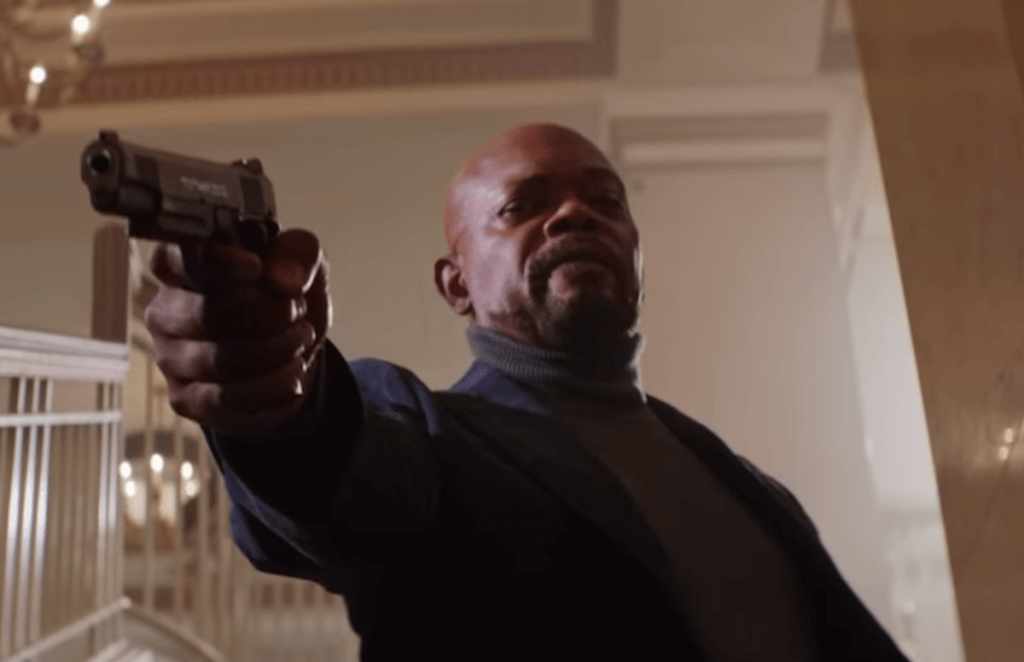 Shaft is essentially a buddy not-quite-cop movie with Shaft and JJ as the buddies, and they both lead the film well. Shaft is the standout character, of course, and Samuel L. Jackson is just as much a force of nature as he was in the previous movie. He commands the screen like few others, and Shaft becomes the urban legend everyone says he is through Jackson’s performance. Even his more human moments never step on his larger-than-life personality, and Jackson doesn’t once waver.  JJ is the contrast, a guy living in the shadow of an icon who could never hope to measure up, to such a degree that he doesn’t even want to. Jessie T. Usher walks a tightrope, keeping JJ feeling very beta while not making him annoying. This doesn’t feel like a passing of the torch, which is good, because I don’t think JJ could carry a movie by himself. But I would definitely be up for another Shaft father/son adventure.

They have to have better villains next time, though. The bad guys in Shaft are lightweights with no personality or compelling motivation. Their deficiency is felt more than it normally would be because one can’t help but compare them to Walter Wade and especially Peoples Hernandez from Jackson’s last Shaft. Those were real characters who felt like they were more than just adversaries for Shaft. They had arcs, aspirations, human frailties, and were played by two stupendous actors. When these guys are on screen (which doesn’t happen often), you’re mostly just waiting for Shaft to dispose of them. Maya is well-played by Regina Hall, but the character is a grating nag; I think that’s the point – she’s another person playing the role she believes she’s supposed to, but it runs antithetical to her true desires – but you still can’t help but feel Shaft dodged yet another bullet. Alexandra Shipp fares better as Sasha, the girl JJ won’t admit he loves; she wears the mask of modern propriety – to her detriment – in the same way Maya does, but she’s much easier to tolerate and has some funny lines too. And, the original Shaft, played once more by Richard Roundtree, is a lot of fun. He’s another dinosaur who remembers the way things used to be, and he’s a delight when he shows up. Everyone else is just kind of there; nothing bad, but nothing special either. 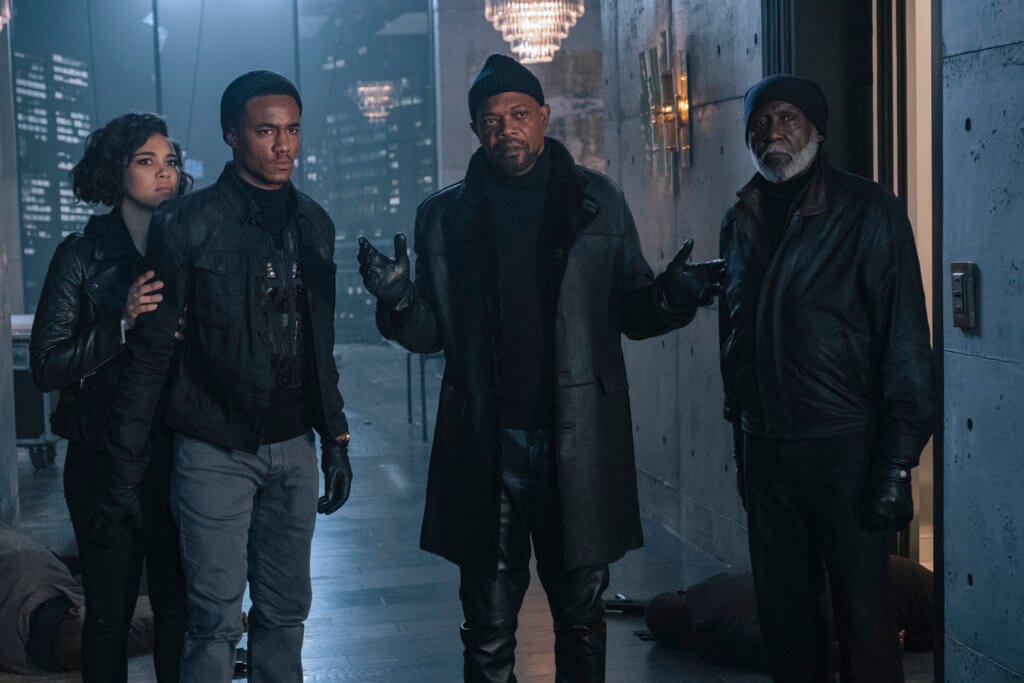 The technical aspects of Shaft are also fine. The action is unspectacular, but that feels right for this kind of movie. Shaft shouldn’t be dodging explosions will dangling from a helicopter; he should be breaking bones and shooting gangsters. Some better camerawork would’ve been appreciated later on, but there are one or two great shots nonetheless. The music is mostly bland, with one or two well-placed songs. Isaac Hayes’ immortal “Theme from Shaft” plays here and there, of course, but at the end, there’s an updated version that’s just terrible and never should’ve been recorded (despite it being called “Too Much Shaft”). Shaft isn’t a marvel, but it works.

And how well it does likely depends on your feelings about the series. If you’re a purist who wants something in the vein of the Roundtree films, you’ll probably hate this. If you liked Jackson’s other Shaft, you’ll probably like this one too, though I’d wager not as much. But if you just want a fun, manly time at the movies, I think you’ll enjoy yourself. Shaft doesn’t reinvent the wheel, but I wouldn’t want it to; I want to see more workmanlike action movies, and Shaft comes through ten times out of ten on that score.

While not groundbreaking or technically strong, Shaft is a fun and funny action-comedy that champions masculinity and fatherhood, and lets Samuel L. Jackson loose to rule the screen.