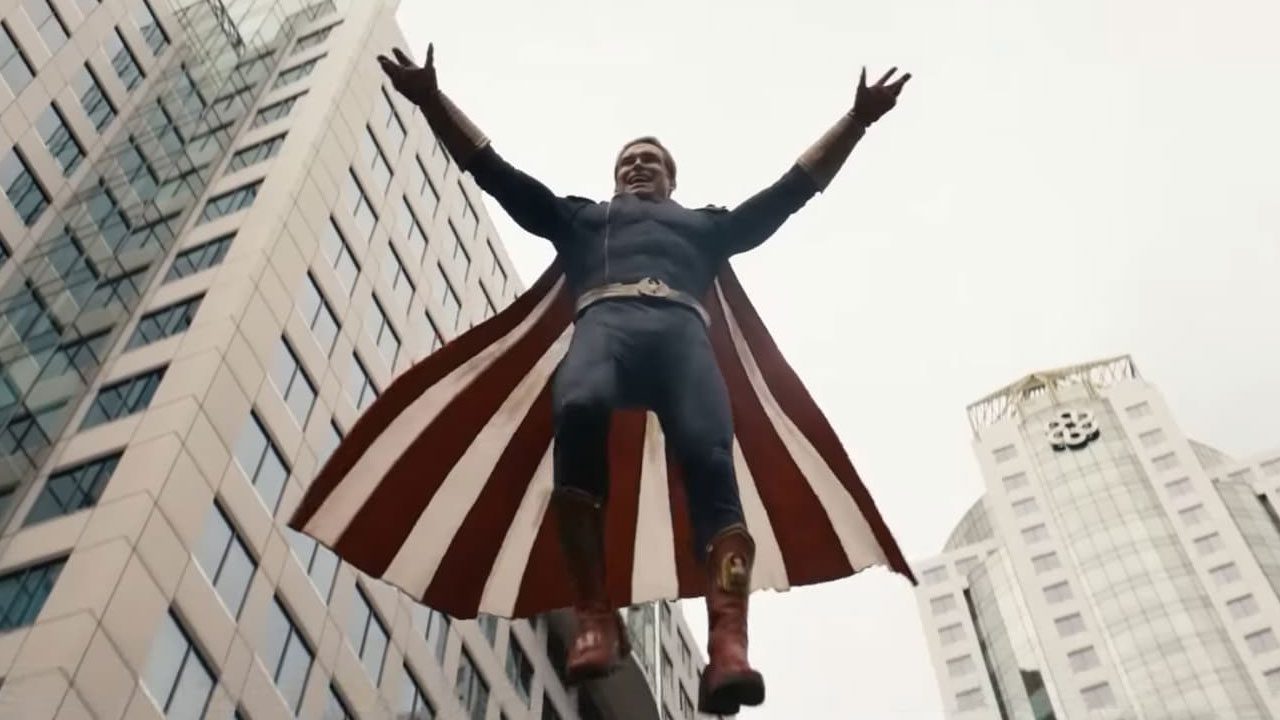 “Glorious Five Year Plan” finds MM reminiscing about his father’s death and Soldierboy. Hughie finds out Butcher is on temporary V and is ordered to keep it to himself. Homelander gives an interview about the dark forces at play behind the scenes, and Stan Edgar plans to strike back. Butcher meets with Nina; she demands Cherie despite the money Butcher gives her. Homelander leverages his manufactured relationship with Starlight to intimidate her and Hughie. The Boys leave on a private plane courtesy of Nina. Starlight and Maeve talk about taking Homelander down. Butcher reveals Nina’s real play: having Kimiko kill one of her enemies. Starlight recruits Supersonic to help kill Homelander. In a meeting of the Seven, A-Train suggests they look into Bluehawk, a hero over-policing black communities. The Deep says Homelander can’t do that because he shares a fanbase with Bluehawk. Homelander sides with the Deep, prompting Supersonic to recruit A-Train. Kimiko is dropped off and kills the man. At Victoria Neuman’s press conference, she reveals that Homelander has presented evidence of Stan Edgar’s crimes, and he’s arrested. Frenchie and Kimiko plan to leave after the next job. Homelander tells Victoria that Edgar was prepared to betray her too. He also gives her a bag. Butcher takes another shot of V. Victoria gives her daughter a dose of compound V, which is what Homelander gave her. The Boys bust into the military base Nina directs them to. Hughie and Butcher punch through the guards, having taken V. They find Soldierboy, and he emerges from a container, emitting a deadly blast. Kimiko is hit and doesn’t heal. A-Train tells Homelander about the mutiny, and he kills Supersonic. 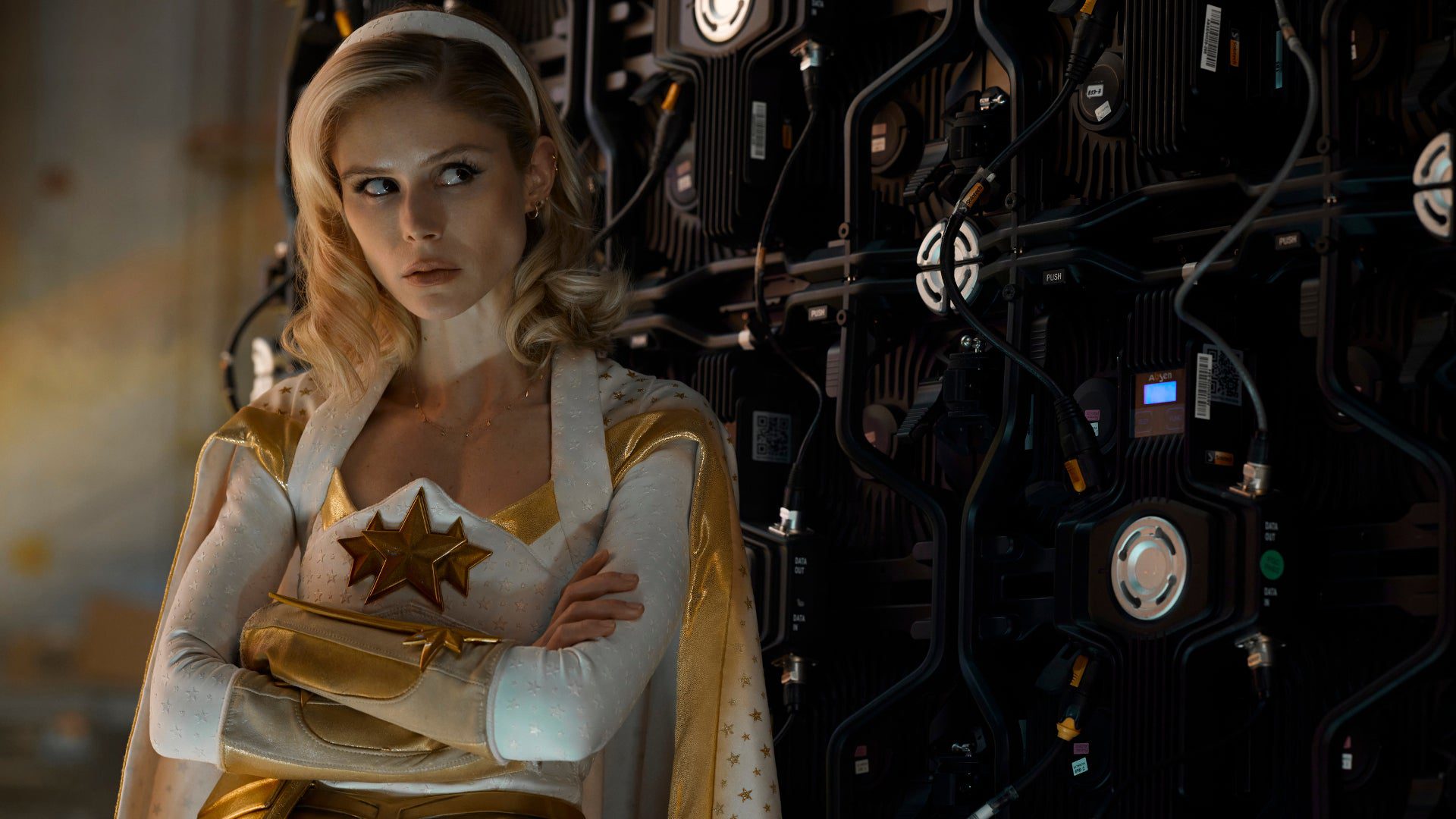 I have to admit, I didn’t expect Stan Edgar to lose control completely like this. He’s been the one character able to consistently reign Homelander in, and with Edgar gone, the other superheroes and regular workers at Vought are much less safe. He’s also one of the most interesting characters, so I hope and assume this won’t be the last we see of him. Giancarlo Esposito is a fantastic actor, and Stan Edgar’s intimidating presence is one of the main factors keeping the supes in check, even if he isn’t a wonderful person himself. The means of his downfall also shocked me; Stan’s interactions with Victoria Neuman in previous episodes have shown a mutual love, if not the healthiest or most conventional adoptive relationship. Granted, if she’s willing to blow people’s heads up, I guess it would be silly to consider a little corporate backstabbing to be over the line. This also helps keep Victoria’s cover as an honest congresswoman standing up to the big guys. 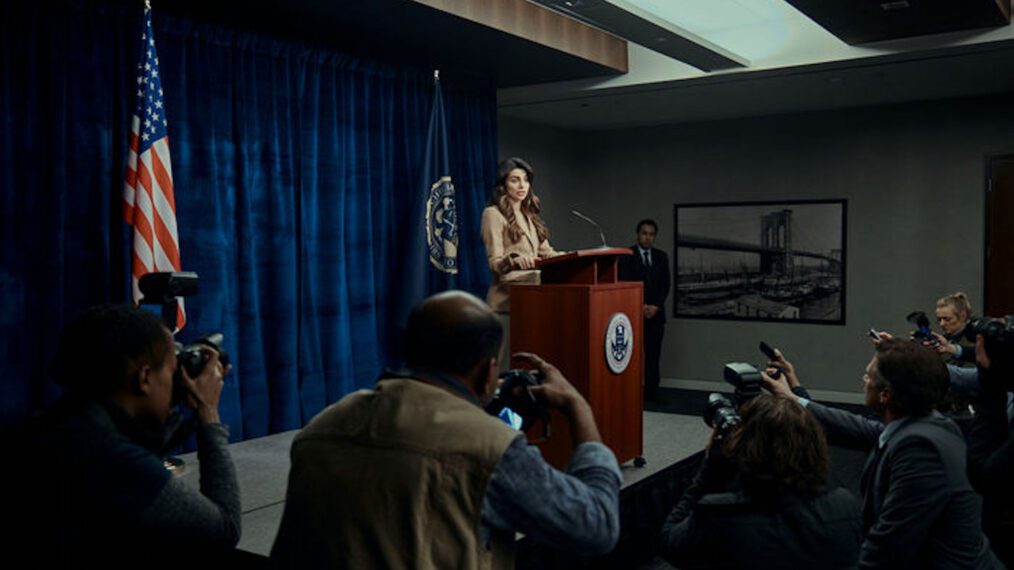 Giancarlo Esposito gives a particularly strong performance in “Glorious Five Year Plan,” and my favorite scene is entirely dialogue-based. When he speaks to Homelander in the Seven boardroom, it’s electrifying. All he does is tell Homelander things we all know; Stan was a protective shield for him, he has no soul, etc. But it’s so well acted you can feel the tension emanating from the screen. It’s rare when an episode of The Boys has a standout performance from someone other than Antony Starr as Homelander, and I think we can safely count “Glorious Five Year Plan” among them. Giancarlo Esposito is such a fantastic villain, and it’s always a treat to see him talk down to people, especially Homelander. 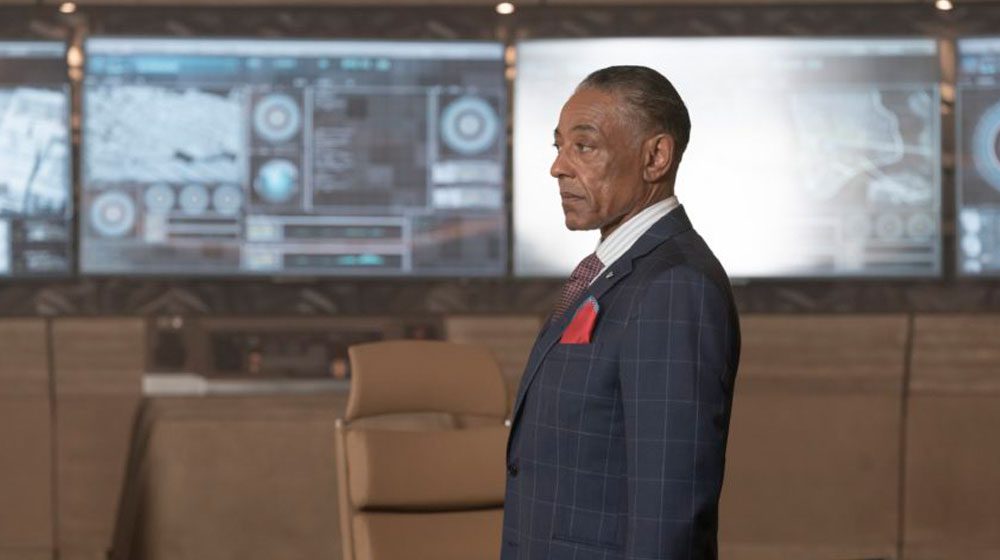 It’s understandable for Annie to want to take Homelander down, but man, this plan was poorly handled from the start. Couldn’t she have maybe given Alex/Supersonic a list of people not to trust? A-Train seemed like an obvious ally to him because of his treatment from Homelander; he doesn’t know these people! But A-Train is inconsistent and can’t be counted on for support on much of anything. As more of an insider, Annie could have given Supersonic this information. After everything she’s been through with Vought and the Seven, I’m surprised she didn’t think to do so. Now, rather than joining their virtuous cause, A-Train has gotten Alex killed and used it to climb the proverbial ladder. The sight of his body is most gruesome and perpetuates the notion that Homelander really is the most formidable supe out there. Did anyone else kind of believe Supersonic earlier in the episode when he confessed his undying love to Annie? I thought that was totally sincere until he started laughing. 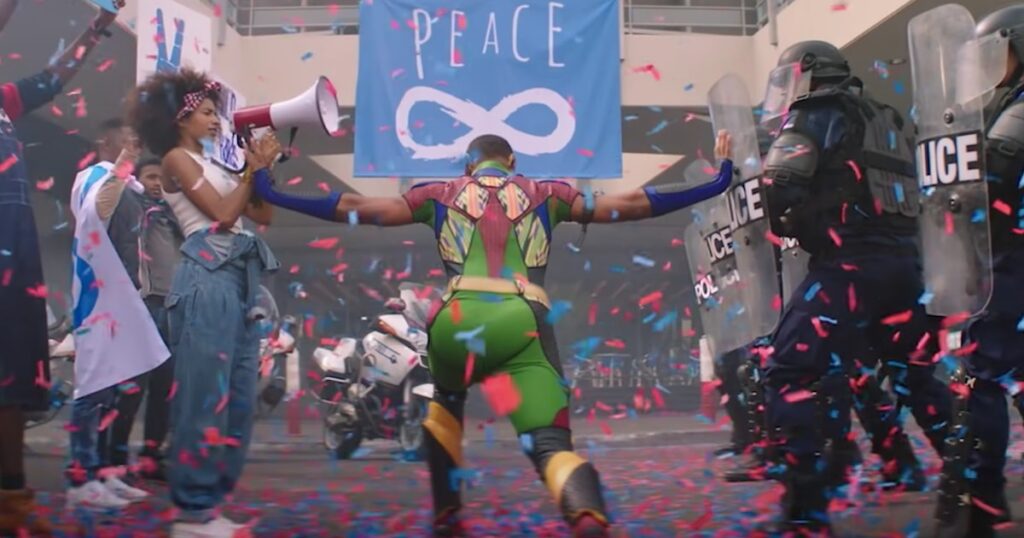 I also liked the conversation between Starlight and Maeve a lot. Maeve is more than willing to take Homelander on by herself, even though she would surely die in the process. This inspires Starlight to play therapist, asking if Maeve really cares so little about herself. It’s easy to see where the self-hatred comes from, and pretty relatable as well. Despite not getting a ton of screen time (especially this season so far), I find Maeve interesting, and I like her a lot. When Frenchie talked to Kimiko about leaving the Boys, I assumed one of them was going to die, but I really thought it would be him. They surprised me again here by having Kimiko take that blast from Soldierboy. I have to assume she won’t die; she’s one of the main characters and a major asset to the team. But Frenchie’s reaction, in particular, was heartbreaking. I guess Soldierboy is just out on the loose since the team clearly doesn’t have him in their van; it’ll be interesting to see what he does and how they encounter him again. I liked the housing he was in and the creepy vibe of the military base; this gave major Winter Soldier vibes, and I somehow doubt that was a coincidence. 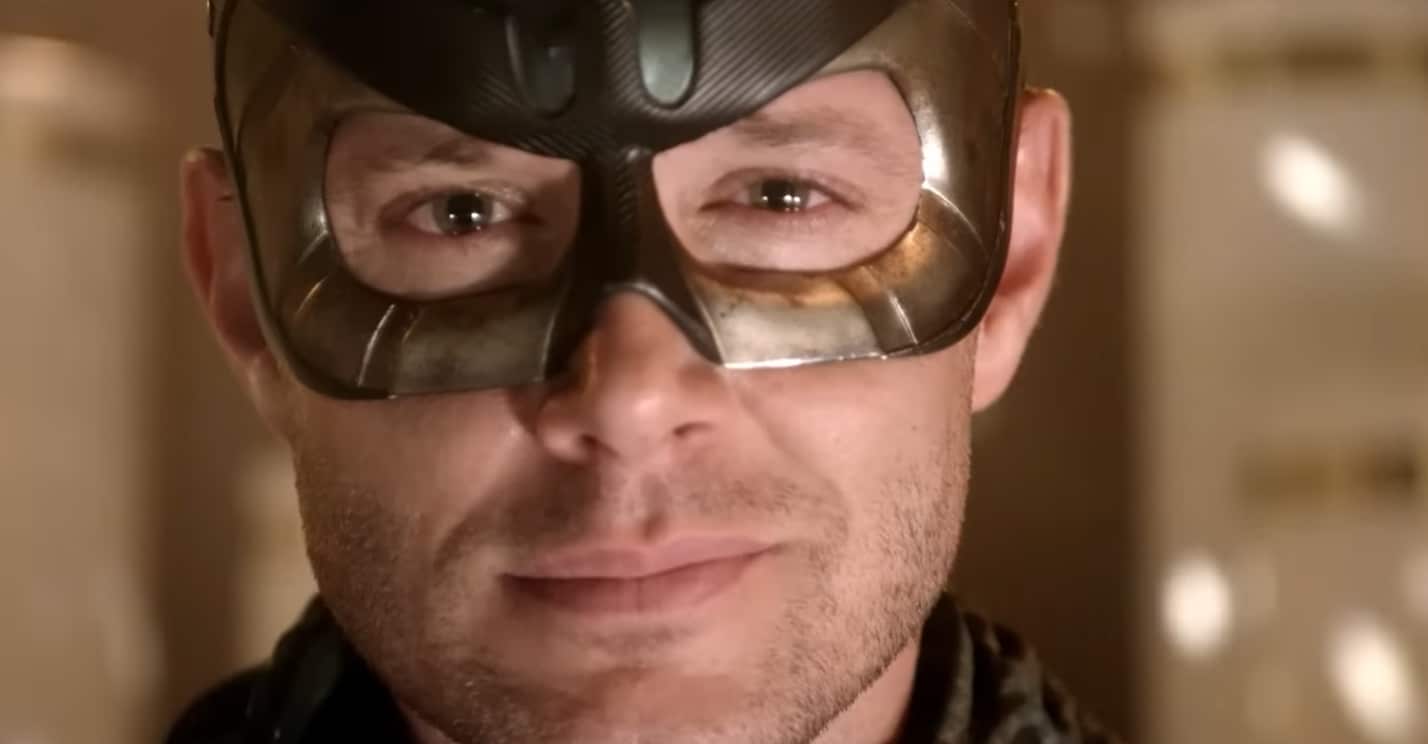 On the lighter side, the hero-based sex toys got a chuckle out of me. That’s totally something that would exist if it doesn’t already. The way Kimiko used them to kill her target and his guards is hilarious, too. I also liked the man-murdering hamster once the Boys infiltrated the base. Overall, I like “Glorious Five Year Plan,” though it may be my least favorite episode yet due to the lack of Homelander rants.

Overall, I like “Glorious Five Year Plan,” though it may be my least favorite episode yet due to the lack of Homelander rants.