REVIEW: The Flash – Season 6, Episode 2 “A Flash of the Lightning” 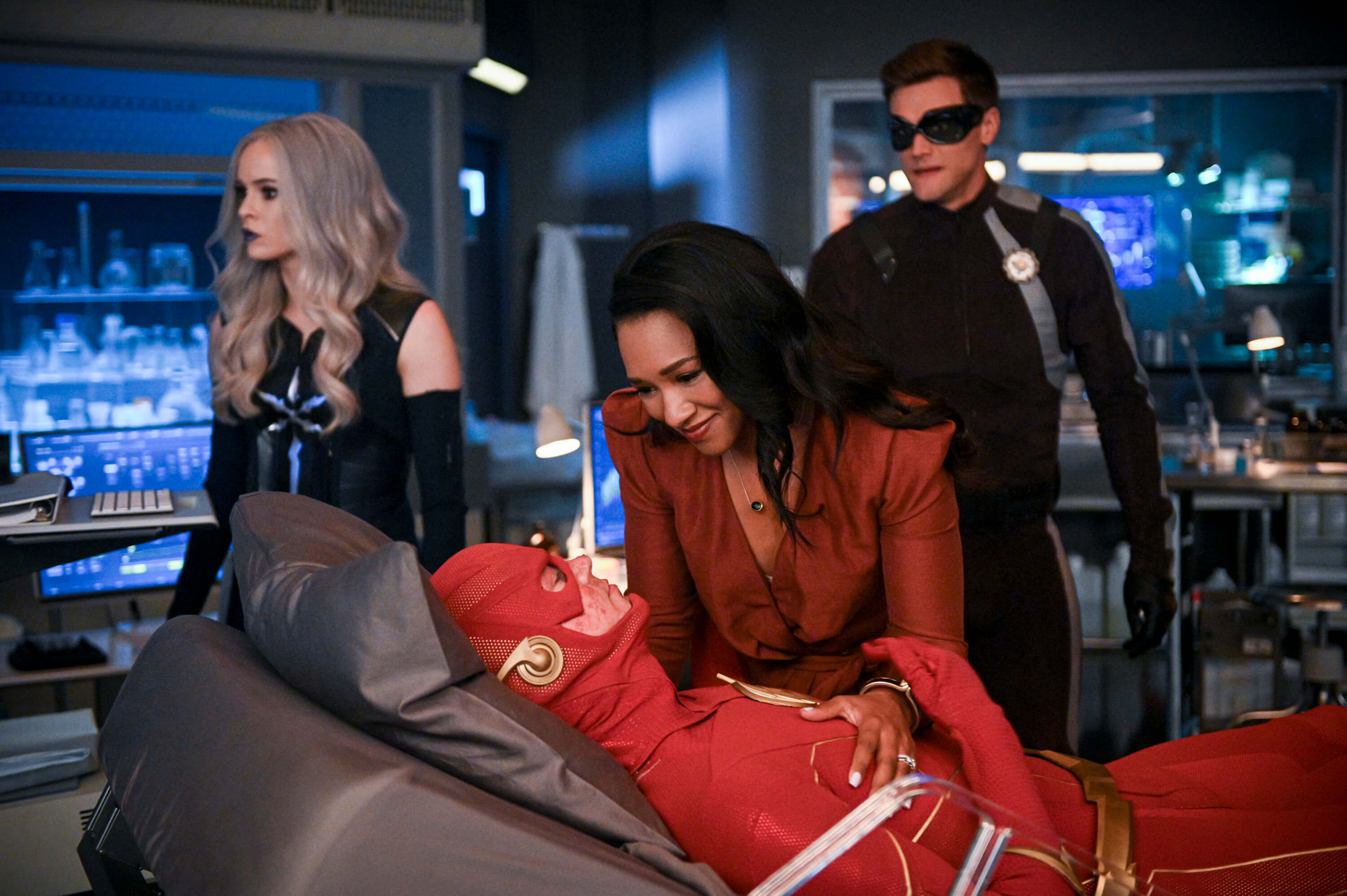 The road to “Crisis on Infinite Earths” continues on The Flash, with “A Flash of the Lightning” affording a glimpse of what to expect from the apocalyptic event. Barry’s prophesied death is the main thrust of the episode, which moves Dr. Ramsey Rosso’s dark turn to the back burner. Some familiar faces return, and once more, Barry’s resolve is tested, in a good but fairly light connective installment.

Barry seeks more perspectives on his fated death. Killer Frost tries to forge her own identity, with Cisco’s encouragement. Cecile finds a slam-dunk prosecution case is more complicated than it seems and draws Iris, Joe, and Ralph into the investigation. Ramsey has some trouble furthering his research.

“A Flash of the Lightning” begins with Iris pushing Barry not to accept the Monitor’s declaration and try to change his future, as they’ve done in the past. I love the role reversal in this plotline; in season 3, it was Iris that was destined to die, and Barry refused to accept it. Now that the shoe is on the other super-fast foot, Iris is no more willing to sit back and watch her husband die than he was her. The bond between Barry and Iris is one of the show’s cornerstones, and despite their differences, at heart, the two are very similar, finding strength in their love for each other. Their refusal to give up on each other fuels them, and together neither will give up on themselves either. The Flash is far enough along that it doesn’t have to make a big deal of this when it comes up; when Iris tells Barry they’re going to fight, we know what it means and accept that Barry is up and running almost instantly.

Where he’s running is through the Speed Force, and through the Multiverse, till he gets blocked by a dose of Anti-Matter that injures his leg. Gideon sends Barry to Earth-3 in the hopes that Jay Garrick can provide him with some answers. “A Flash of the Lightning” reinforces what a wise move it was to make Jay Henry Allen’s doppelganger; from who else would Barry seek guidance than his father? And the closest proximation to Barry’s dad is a man who not only looks just like him but is a more experienced Flash and in a unique position to impart wisdom, similar to a father’s. (It’s also such a delight seeing one of the other Earths again; while the glimpse is minimal this time, the futuristic blimps flying around are way cool.) And Jay has a device in the vein of the one Cisco’s building, allowing Barry’s mind to traverse the Speed Force and bypass the Anti-Matter. What he finds isn’t helpful, however; Barry not only sees but feels billions of people across billions of potential futures vaporized in the coming Crisis, as well as his own death in preventing it. This is a confirmation of the Monitor’s warning: Barry has to die to save the Multiverse.

It’s another father, this time from his own world, who gives Barry the perspective he needs to face his doom. Joe goes to work as a policeman every day knowing it could be his last, just as Barry becomes the Flash knowing he may not make it home, but they take that risk on because others depend on them. It’s the culmination of everything Barry’s been told: Iris reminding him that the future is never set in stone, the Monitor telling him the consequences of inaction, Jay showing him the lack of alternatives. Joe doesn’t know what will happen, and neither does Barry; he only knows what will happen if good men do nothing. And that’s what Barry needs to face what will come and to be at peace with whatever outcome results. Barry’s acceptance is demonstrated when he fights Esperanza at the end of “A Flash of the Lightning,” facing what could be his death to save others. And he lives! Esperanza isn’t exactly a Crisis-level threat, but she’s enough to show Barry the virtue of resilience, as Joe put it. As great as Jay is, Barry’s got a dad right beside him who always seems to know what he needs to hear.

The Deontological ethics vs. utilitarianism theme is present once again in “A Flash of the Lightning,” this time in Barry’s attitude toward his own death. He won’t sacrifice anyone else, even someone evil, for the greater good, but he’ll readily sacrifice himself. It’s Iris who takes on Barry’s traditional ethics and won’t accept the sacrifice, insisting that there is a way to save Barry and the Multiverse. We won’t know what the answer is till “Crisis on Infinite Earths,” but for now, Barry’s open to anything, so long as he can save everyone. Seeing his mother’s doppelganger on Earth-3 is a manifestation of Barry’s shifting perspective on the matter. At first, she’s a symbol of unalterable fate, reminding Barry that he could never save her without risking innocent lives. But later, she’s the embodiment of a second chance – one Barry gets through Jay as well. There is a world where his parents are alive, and if that’s true, maybe there’s a world where Barry can live and still stop the Crisis. 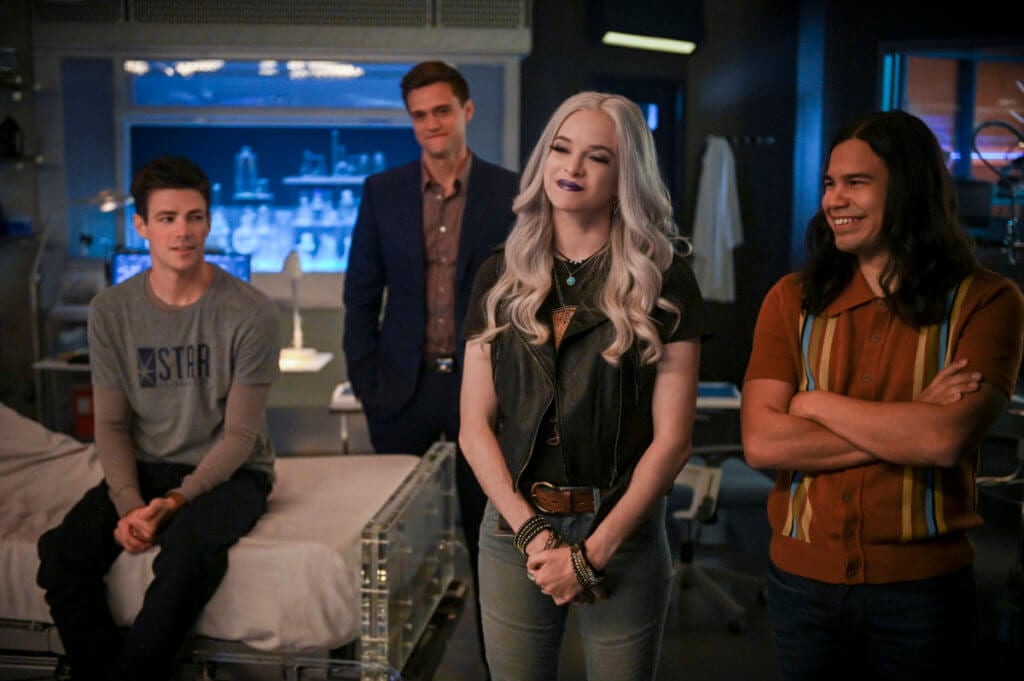 The B and C plots of “A Flash of the Lightning” aren’t nearly as compelling as Barry’s journey, and while they effectively tie Cecile’s investigation into that, it feels like it serves no other purpose. It’s kind of silly that everyone doubts Cecile’s powers despite having seen how accurate they are; this is the idiot plot in full effect, and for characters who are smart throughout the rest of the episode too. Cecile’s change from one side of the courtroom to the other makes sense, although I guess this means she’ll continue to play a significant role in The Flash, and I imagine she won’t do something crazy like give her clients the option of having their privacy invaded. Killer Frost’s interest in art is fairly boring, and while her critique of modern art early on deserves a fist-pump, these scenes are little more than an excuse to give her and Cisco something to do and lift right out of the episode. I really hope we shouldn’t look forward to these two getting bumped for Cecile. In light of all this wheel-spinning, it’s a shame Ramsey Rosso is relegated to a quick couple of scenes at the beginning and end. Why not tie that in with Barry’s inner turmoil rather than Cecile’s case? The acting is good all around, with Grant Gustin the standout, conveying Barry’s wrestling emotions as expertly as he has since the beginning. As excellent as The Flash typically is (not you, season 4), it wouldn’t be nearly as great without Gustin. Even Danielle Nicolet isn’t too bad this time.

“A Flash of the Lightning” is a decent episode that has strong performances and a resonant exploration of how a hero faces death, but the subplots aren’t as interesting, and Cisco and Caitlin/Killer Frost have almost nothing to do. There have been worse, but this isn’t a hall-of-famer.

The Flash – "A Flash of the Lightning"

“A Flash of the Lightning” is a decent episode that has strong performances and a resonant exploration of how a hero faces death, but the subplots aren’t as interesting, and Cisco and Caitlin/Killer Frost have almost nothing to do. There have been worse, but this isn’t a hall-of-famer.