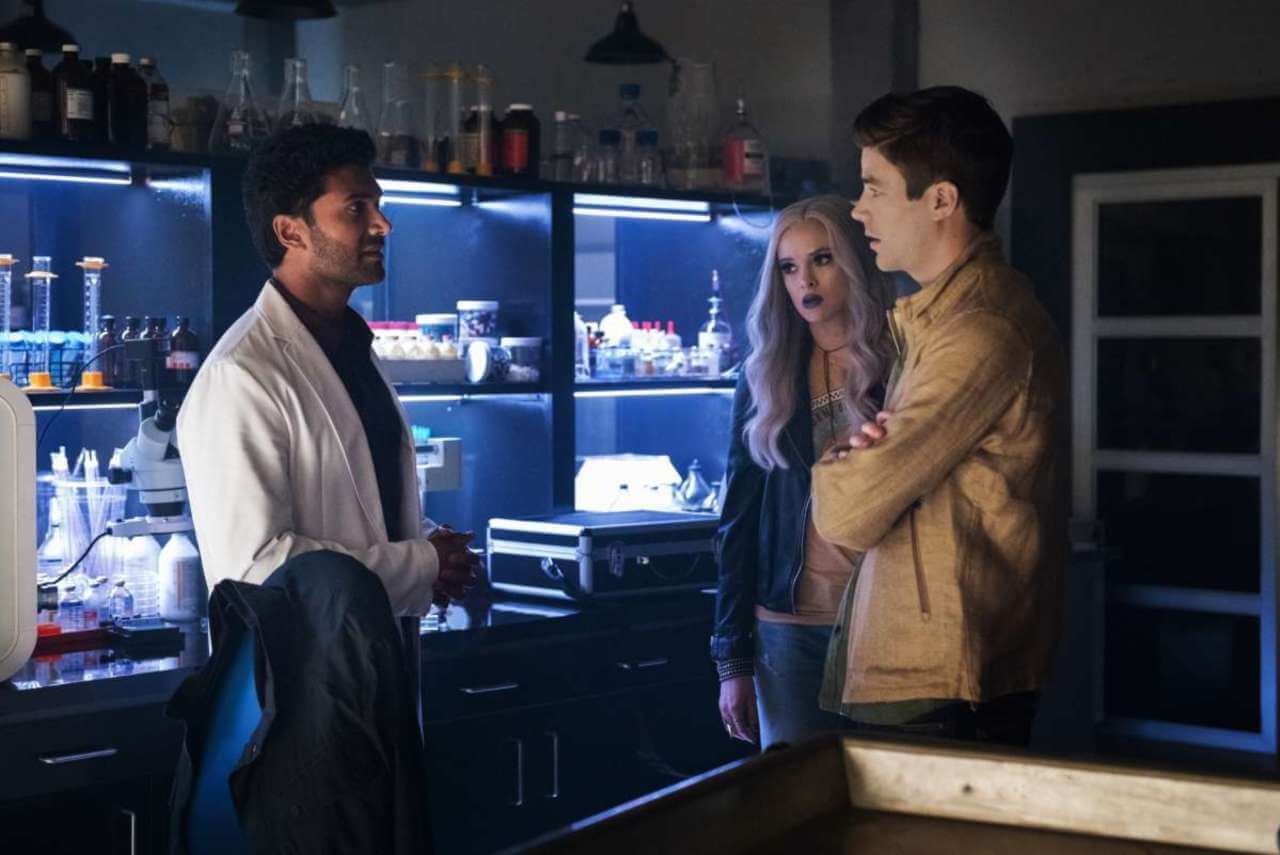 Three episodes in, season 6 of The Flash is shaping up to be something special. “Dead Man Running” lives up to its title, showing how several characters deal with their impending demises, and how Barry has become a hero capable of helping others face the inevitable. It’s also fun and heartwarming, it moves the season’s plot along, and it introduces someone we’ve been waiting to see for the past couple of weeks.

Barry prepares his friends for the coming Crisis but leaves out an important detail. A metahuman tears through Central City looking for Dark Matter. Iris and Allegra experience some employer-employee growing pains. Ralph’s mother needs his help.

“Dead Man Running” begins with a scene right out of Batman Begins, albeit with a dark twist. A gang of arms dealers – those formerly led by last week’s victim of Ramsey Rosso’s new meta abilities, Mitch Romero – are making an illicit weapons sale in a warehouse when a mysterious figure starts picking them off one by one. But the intruder isn’t Batman, and he isn’t even the Flash; he’s Romero, pale as a zombie (Is that why they named him “Romero”?) and leaving no survivors in his assault. Barry brings along Killer Frost – who now just goes by “Frost” (“I’m rebranding”) – to help him investigate, teaching her the finer points of crime-fighting, and once she’s done speculating about animal attacks, they discover that the guns left behind are powered by Dark Matter, and they’re all empty. That’s all Frost needs to narrow down her list of suspects to Caitlin’s old friend Ramsey Rosso. This is good, efficient storytelling; “Dead Man Running” moves right to Ramsey without beating around the bush or sending Barry and Frost on a wild goose chase. Frost isn’t stupid and thinks of the one guy she knows desperate for Dark Matter. Their encounter sets up the episode’s central (city) conflict, and it’s classic Flash.

Barry knows his run is coming to an end, and he’s now got to leave his superhero duties in capable hands. That means teaching Frost how to be a hero, and despite the great strides she’s made, that’s easier said than done. When she finds Ramsey in “Dead Man Running,” her investigative approach is to hold a jagged ice shard to his throat and demand answers. After Barry calls her off, they learn that Ramsey is also a victim of Romero, his lab ransacked for the Dark Matter he acquired last week. When Rosso offers his help in recovering the Dark Matter, Frost believes accepting help from someone they can’t trust would be a mistake, but Barry reasons that it’s a worthwhile risk if it helps them save lives. In both instances, he is imparting on Frost his philosophy of doing the immediate good; don’t hurt someone to get answers, and don’t put people’s lives in danger because of a potential threat down the road. When they track down Romero and Frost blasts him out a window, Barry forcefully imparts what he thought was his rather obvious rule against killing. Frustrated with Barry’s seeming unwillingness to act, Frost calls him a bad teacher and storms away.

“Dead Man Running” is more complex than just having Barry lecture Frost on the ethical lines for superheroes, though, because she has a point. When Barry tells the team about the dangers of Crisis, he only lets them know about their deaths; he keeps his own to himself, instead encouraging them that they can change their futures. But in trying to protect them, he’s robbing them of the opportunity to face the real danger, and putting them through unnecessary stress in doing so. Frost, who was once determined to be better than her previous moniker suggested, is now taking Barry’s moralizing in stride, not caring about being a better person because she thinks she’s fated to die soon. She’s just started carving out a life for herself, choosing who she wants to be; what’s the point if it’ll all be taken away in a few weeks? Once Barry understands what’s causing her aloofness, he’s able to help her decide to live as long as she can instead of die early. She even gets a birthday party out of it. This is also the impetus for him to tell his friends that he’s the one who has to die, not them. 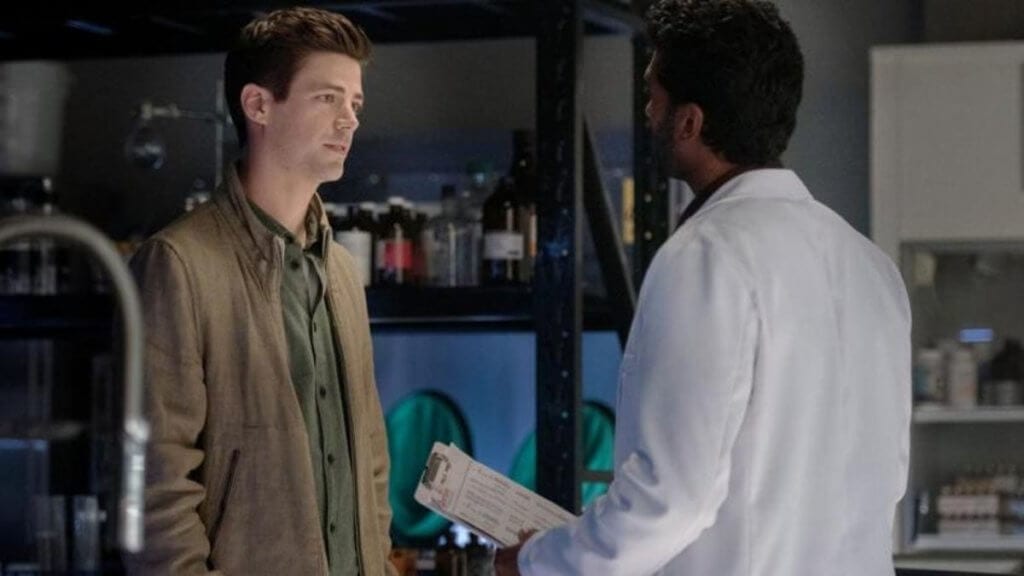 It’s Ramsey who helps Barry see Frost’s pain by revealing his own. “Dead Man Running” is the beginning of The Flash delivering on the promise of “Into the Void.” Ramsey isn’t a bad guy; in fact, he’s quite noble in his ambitions. He honestly wants to help people, and when Barry pushes him, he sets aside his personal quest and helps stop Romero. But just like Frost, Ramsey is also a man afraid to die. He wants to save himself, and to save many others, too, but the good guys are trying to stop him at every turn. Unlike Barry, Ramsey believes in the greater good, and he’s tired of being told he isn’t even allowed to try to find a cure for his disease. On the surface, this seems entirely reasonable, but “Dead Man Running” introduces the first consequences of Ramsey’s experimentation. Not only is Romero dead because of Ramsey, but he’s a reanimated corpse who is killing still more people. And while it’s easy to shrug off a bunch of criminals, the security guards at the lab are innocent victims. On top of all this, he’s controlled, purposely or not, by Ramsey, a physical manifestation of Ramsey’s single-minded crusade. Now Ramsey’s utilitarianism is put to the test: what losses are acceptable to benefit mankind? How many people can be sacrificed to cure cancer? Does it matter who they are, or how many? Barry would argue that one loss, no matter who it is, is too far. What about Ramsey? I guess we’ll find out as the season goes on, but the breadcrumbs along the path are already tantalizing.

The subplots tie into “Dead Man Running’s” main theme. In helping his mother Debbie out of a jam, Ralph learns she’s been lying to him his whole life, protecting him from the pain he felt when his father left by telling him the men he’d accepted as family all died. As with Frost and Ramsey, Ralph’s anger is a mask for his hurt, and it’s in having an honest conversation with his mother that he’s able to heal, and to help her heal as well. Iris keeps the truth about Allegra’s investigation from her because she doesn’t want to introduce a girl just getting her life started to the concept of infinite Earths and the Crisis that threatens them, but she ends up losing the trust of someone who needs her. Iris’ answer isn’t quite as forthcoming as Barry’s and Debbie’s; she just asks for some faith. The only one who refuses to trust others with the truth is the newest version of Harrison Wells. This time, Wells is an adventurer from another Earth, and he’s looking for something called Eternium. And despite a barrage of questions and offers of help from Iris and Cisco (and, to be fair, some threats), Wells disappears in a literal puff of smoke. What he’s really up to – outside of debunking religions – isn’t yet clear, but it’s a safe bet he’ll need to let Barry and friends in if he’s going to pull it off. 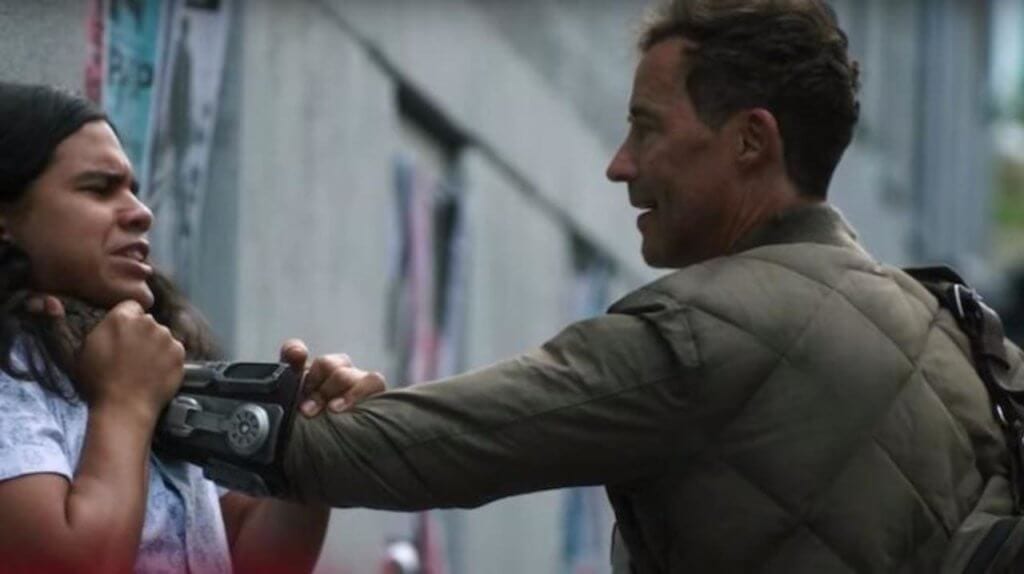 “Dead Man Running” features some stellar acting, particularly from Grant Gustin. He’s become an even stronger actor than he was when The Flash started, and he uses subtle tics to let us know what Barry is thinking, such as his quick eye movement when Ramsey mentions his dead mother, or the slight tilt of his head when he pretends to leave Ramsey alone with the Dark Matter. Sendhil Ramamurthy is also great as Ramsey, keeping the burgeoning villain relatable and sympathetic as his methods grow murkier. The scene between these two at STAR Labs is terrific, and they both feel eminently human as they debate their philosophies. Danielle Panabaker continues to stretch her muscles as Frost, a character completely different from Caitlin, but just as compelling. I’m also glad Ralph has moved on from his silly persona in season 4; he’s still funny, but he feels like a real person, and his adventure with his mom (who’s played by Amy Pietz from Caroline in the City, a show which I may be the only one who remembers) will afford him even more room to grow. I have to admit, though, that Debbie telling Ralph every one of her boyfriends died is a bit farfetched; he really believed this, even into adulthood? And the masterful Tom Cavanagh returns, at last, portraying yet another Harrison Wells doppelganger, and once again a Wells different from any we’ve seen before. This one, nicknamed “Nash,” is already fascinating, and I’m looking forward to seeing much more of him. (That he thinks the Council of Wells is stupid automatically puts him in my cool book.) It still irritates me that Joe is being sidelined in favor of Cecile; Ralph and Debbie’s con at the gambling bar would’ve been better if it was Joe with them instead of Cecile. And, in an episode where ethics are integral to the theme, Cecile’s mindreading is once again simply accepted. But still and all, “Dead Man Running” is excellent.