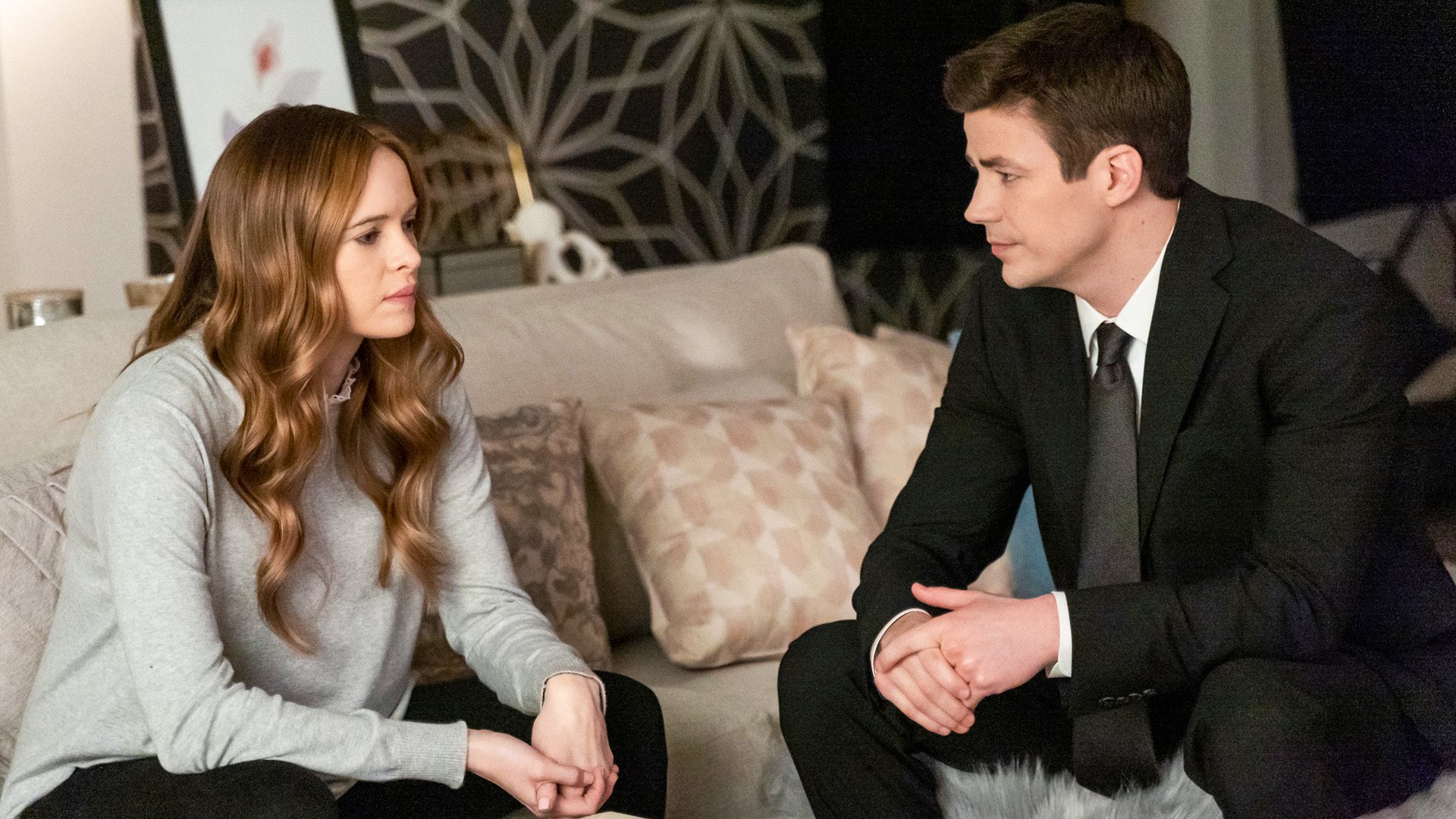 “Funeral for a Friend,” a reference to the comic book story that chronicled the aftermath of “The Death of Superman” (as opposed to the Elton John song), is the inevitable follow-up to Frost’s death in “Death Falls.” It’s a quiet episode with very little superhero action, focusing on the grieving process and how best to honor a loved one after they’ve passed. If you’ve ever seen a TV show or movie before, the answer probably won’t surprise you.

In the days leading up to Frost’s funeral, her friends and family look for ways to cope with losing her, as well as finding ways to honor her memory. A villain named Blockbuster is using a super suit to rob banks, but Team Flash isn’t in the right headspace to stop him. A hot-dog-eating contest is involved; seriously.

The opening montage of “Funeral for a Friend” is one of its strongest moments, showing each team member experiencing different aspects of the grieving process, specifically the ones that creep up on you as you’re getting through the day. Chester orders a coffee at Jitters and notices one of their specialty drinks, the Killer Frost. Allegra leads a meeting at the Central City Citizen and zones out while the writers are talking. Iris freezes at a crosswalk when the pedestrian light tells her to go. (This one is kind of melodramatic and ridiculous; I’d understand if it was Caitlin or Blaine, but I find it hard to believe Iris is this paralyzed after losing Frost.) And finally, Barry looks at the bed where Frost died, remembering watching her slip away while he stood there, helpless, a hero who couldn’t be one. But there are no respites for the Flash, and when a bank robbery turns dangerous for the responding police, Barry needs to get his super on.

The bad guy is Blockbuster, someone I actually remember from an old Batman comic I read years ago. His Arrowverse interpretation is almost nothing like the comic version; this Blockbuster has a metal suit with a Nolan-Bane-like mask. His movements, emotions, and pretty much anything else connected to his body give the suit more power, so he’s hurling cars at cops when the Flash arrives. But as Barry rushes to save an apartment building from collapsing on its tenants, Chester devises a battle plan for Allegra and Cecile… and Frost. Momentarily forgetting that Frost is no longer with them, Chester screws up the strategy and allows Blockbuster to get away while Allegra is left with no backup. The fight scene – the only one in the episode, unless you count some arguments – is the impetus for Joe to establish the theme: Team Flash needs to take a short sabbatical so they can process their loss. This moment is great; it’s a rote scenario you’ve seen done a million times on a million shows, but Jesse L. Martin is so perfect as Joe, so human and caring, guiding and comforting the others while struggling to hold it together himself, that he makes it work.

Now, “Funeral for a Friend” has its setup: everyone has to come to terms with Frost’s death. Each subsequent segment (save the final one) focuses on one character – or pair of characters, in Chester and Allegra’s case, and bully for that – and how they grapple with their grief. Iris wants to use her newspaper to honor Frost but struggles with writing an obituary; Chester comes up with a memorial idea similar to the one for Oliver Queen, incorporating Frost’s costume and powers, but Allegra shoots it down; Barry uses his powers to complete Frost’s bucket list, but finds the tasks unrewarding upon completion. Caitlin withdraws from her friends and the outside world, even spurning attending Frost’s funeral, preferring to escape inside herself, as she always does. All of these tributes are, ultimately, empty. Iris can’t bring herself to write Frost’s obituary, so she passes the assignment to an employee who didn’t even know Frost. Chester and Allegra would rather argue over hummus than think up a good way to honor their friend. Barry is doing a bunch of things he doesn’t care about because he feels like it’s his duty. And Caitlin is dealing by not dealing, keeping herself from accepting Frost’s death by ignoring it until it goes away – which, of course, it won’t. 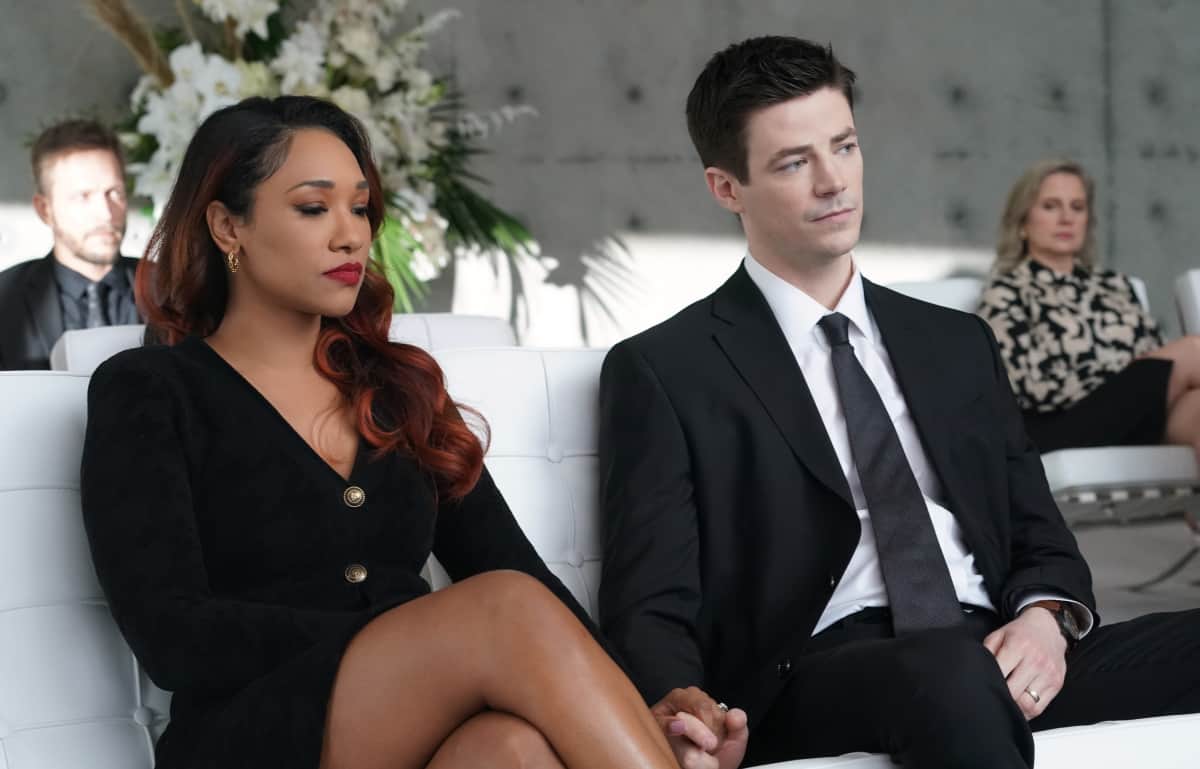 The solutions to their bungled attempts at grief come from outside perspectives. Iris gets her initial idea to use the Citizen from Cecile, who is taking on more metahuman pro bono cases to help those falsely accused of crimes in Frost’s honor. This is good, but Iris learns the wrong lesson from it; using the Citizen is the right idea, but a simple obituary is not something that would make Frost happy. Through a visit from Frost’s “mother,” Carla Tannhauser, Iris realizes that Frost would prefer Iris to use her death to help others, so she sets up a podcast episode with interviews with people Frost saved, and she creates her own little pay-it-forward movement. Through Blaine’s drunken ramblings, Chester and Allegra stop arguing over nonsense and put their heads together to make Frost’s memorial meaningful by using her old clothes instead of her costume. Barry stops trying to be a hero and acts as Caitlin’s friend, helping Frost’s wishes for her sister be realized rather than her silly bucket list. And, through Barry, Caitlin finds the strength to face her sister’s death (or so we think).

The unifying theme among all these tributes is that they have to do with honoring the dead by living your own life as best you can, helping others instead of dwelling on your loss. And that’s a fine message; the thing is, it’s expected, having been done to death elsewhere, and while the execution isn’t necessarily bad – in some places, it’s quite good – it still feels old hat. We can see it coming a mile away, so as we watch “Funeral for a Friend,” we’re already on that page, waiting for Barry and the others to get there too. In the meantime, there isn’t a lot of fun stuff, no resolution to the villain’s antics outside of a Central City Citizen headline. That’s fair enough, and I don’t mind a slower episode here and there (although I would have preferred to either see them take down Blockbuster or for them to have shown it at the top of next week’s episode), but this one feels like it’s going through the expected TV motions. That’s what makes the stinger at the end so refreshing; not only was Caitlin pretending to accept Frost’s death, she attended the funeral – and gave the eulogy – solely to acquire the necessary components for an experiment to bring Frost back to life. Unlike the grieving this week, there are a lot of ways this can play out, and I hope they do something unexpected with it. 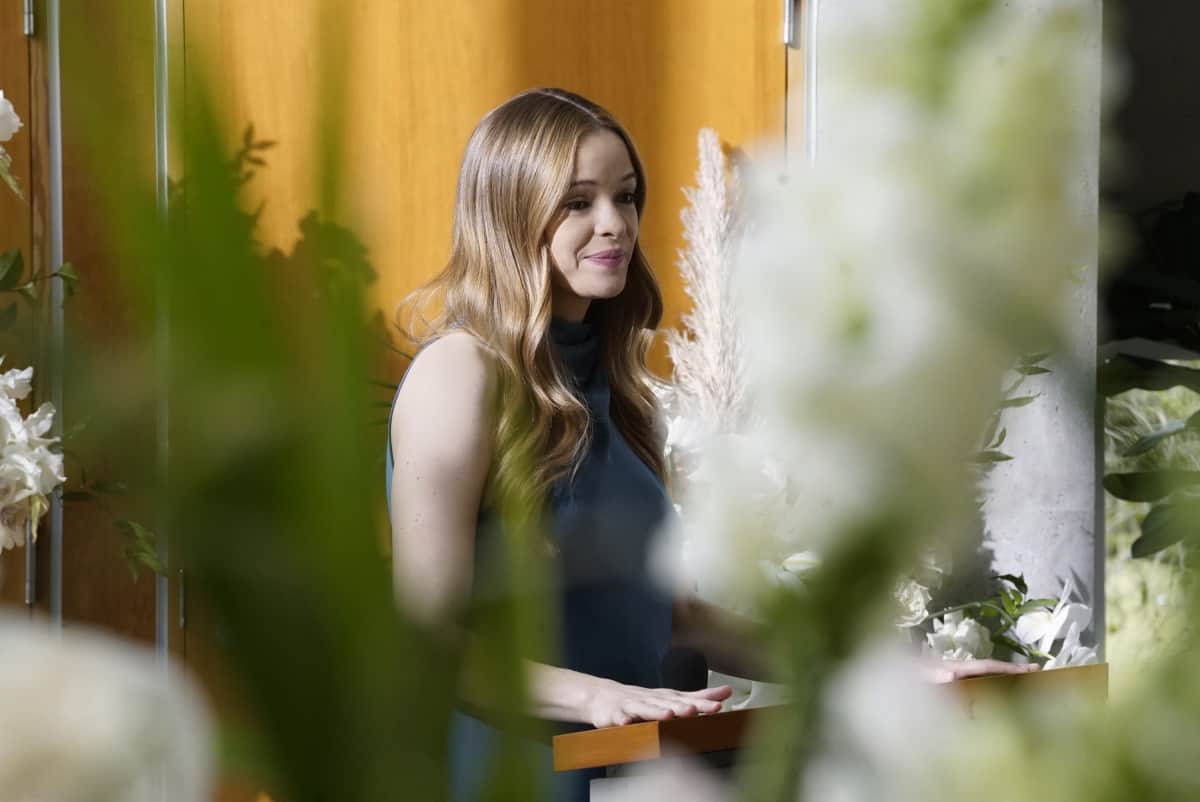 The minutia of “Funeral for a Friend” is hit and miss. Like her freezing at a crosswalk, Iris’ heart-to-heart with Carla feels wrong. Has this woman said more than three words to Iris in the entire series before this? Why would she seek out someone she barely knows to check on her? It would have made more sense if Iris sought out Carla to get her opinion on the obituary rather than vice versa. And Chester and Allegra are unbearable once again, especially her sniping at everything he says. (I have to admit to laughing at a couple of his comebacks, though. “Well, then, call me ‘hummus.’”) Blaine vacillates between his more likable self from last week and the old, intolerably corny version of himself. I liked seeing him tell Chester and Allegra that they’re fighting because they care about each other the way he and Frost did – but then, of course, the most infuriating non-couple in fiction don’t get the message and continue to be total besties. I also enjoyed seeing Blaine and Barry help each other grieve properly, putting aside their childish early methods and remembering what made Frost special. (By the way, take a look at some of the items Barry crosses off the bucket list; one is “Swing dance with Judd Nelson.” We need this scene, CW.) Blockbuster isn’t exactly a classic villain, although Chester making a Blockbuster Video reference was appreciated. I was also glad they brought back Iris’ disappearing acts in the end (not to mention that office rivalry between Allegra and Taylor); I was wondering how her “condition” just disappeared all of a sudden. This one is fine; nothing special, but nothing to sneeze at either.

The Flash – "Funeral for a Friend"

“Funeral for a Friend” is a slower episode that delivers the requisite TV grieving themes in ways that are sometimes effective and sometimes a bit hard to swallow. But some interesting seeds are planted for the future.