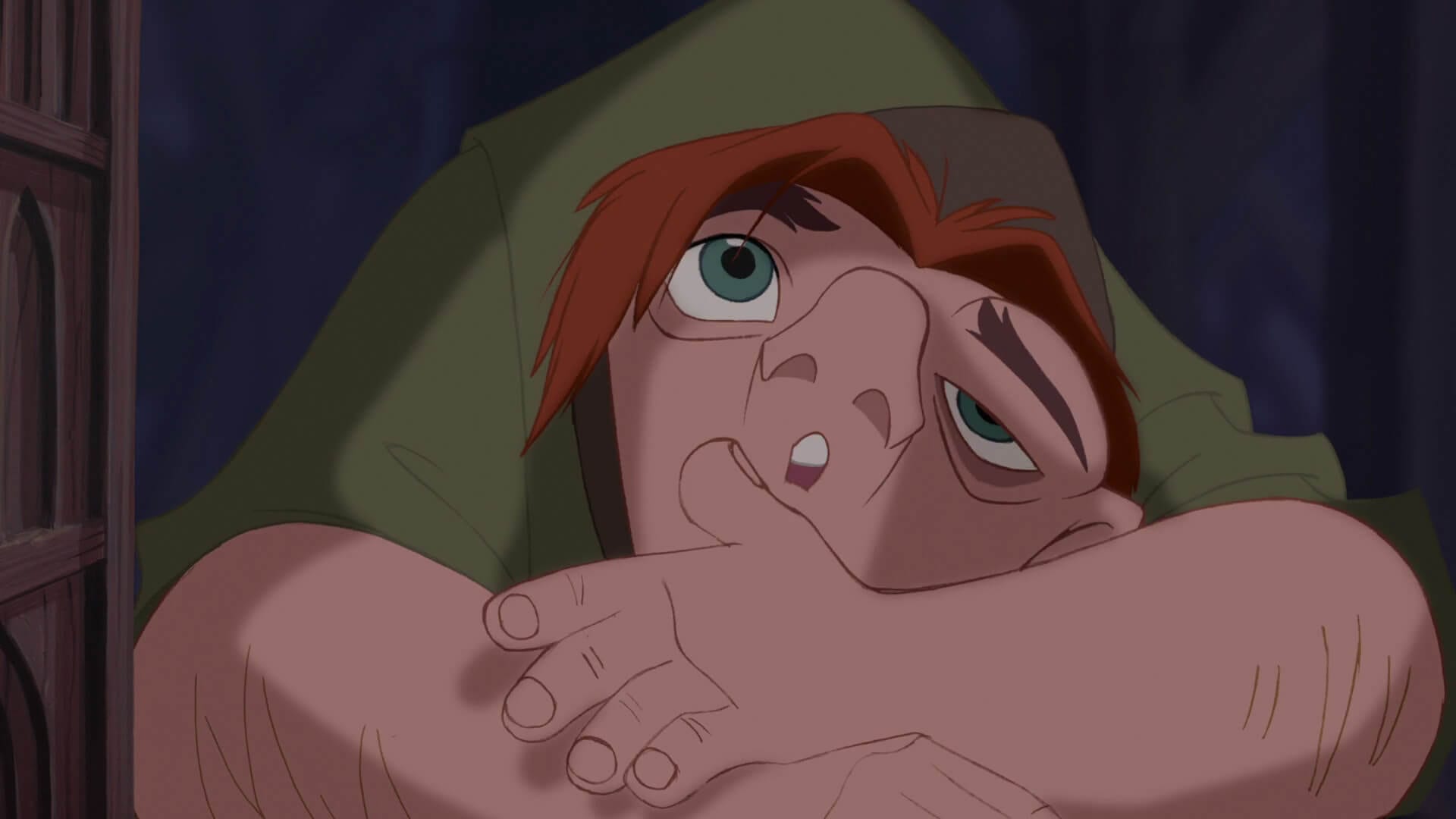 A year after Pocahontas, Disney released a film with a higher budget that would earn a lower box office return, The Hunchback of Notre Dame. Like so many Disney animated features, Hunchback was based on a novel. But this novel was a little different from The Fox and the Hound and Tarzan of the Apes. It was long, wordy, philosophical and most of all, not for children.

Orphaned Quasimodo is raised in Notre Dame Cathedral to ring bells and fear God, but as he grows up he yearns for the outside world. His caretaker Frollo is a controlling hypocrite, but when Quasimodo meets Esmeralda, a good-hearted Gypsy woman, his flawed upbringing is challenged. The film culminates in a literal battle between ideologies of persecution and hatred, love and tolerance.

The Hunchback of Notre Dame is unique because it deals with religion, but not in the same implicit way as showing Snow White praying to a Christian God. The oldest Disney films had Christian iconography and ideals in them, but this is more a result of the time in which they were made as opposed to some kind of “message” within an individual movie. Hunchback instead deals with Christianity not as a given, but as a way of thinking to be considered and challenged. We also see the good and the bad personified in the Archdeacon and Frollo, respectively; the Archdeacon has compassion for the lowliest of souls and serves as the voice of reason, compared to Frollo’s frustration and contempt for the less-than-holy. 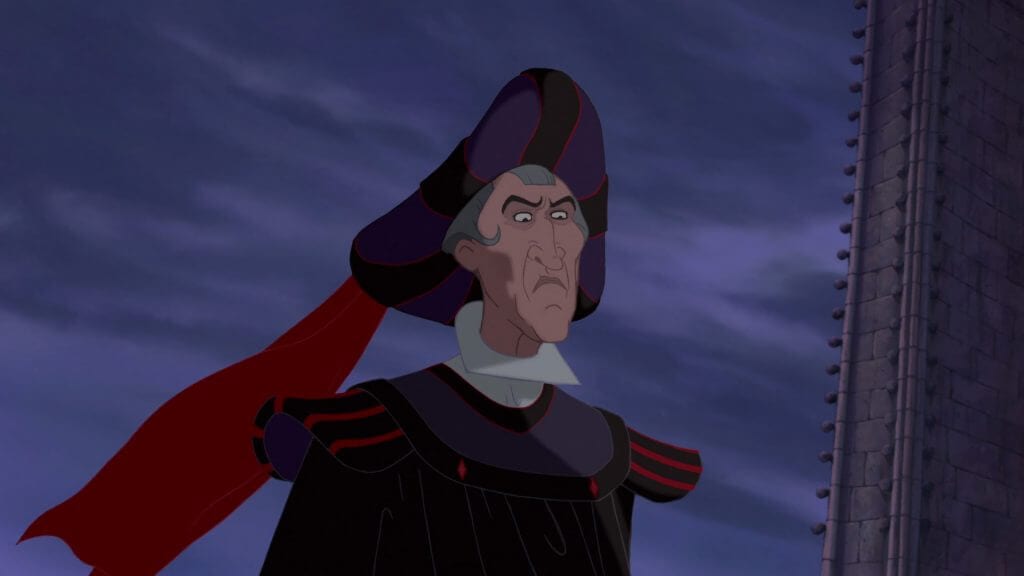 Frollo, the villain of The Hunchback of Notre Dame, shares his racist motivations with Ratcliffe from Pocahontas. Interestingly, both films also feature an interracial couple. However, they handle their themes and villains wildly differently. In Pocahontas the characters continually say, in no uncertain terms, that they’re racist and the other side is “barely even human.” There’s no doubt that Frollo is racist, but this is shown more through internal conflict and action than dialogue. For example, he has no misgivings about chasing or even killing the Gypsies in the film’s opening. He also has an incurable lust and obsession for Esmeralda, to the extent of fantasizing about raping her. This comes to a head first with one of the film’s best songs, “Hellfire,” and finally when Frollo threatens to burn her if she doesn’t “choose” him.

In terms of the film’s better angels, Quasimodo learns the usual Disney hero lesson of accepting yourself, and it’s not that particularly interesting. However, I do like that he learns about the outside world and that everyone isn’t like Frollo. Phoebus is likable and funny, and I love Kevin Kline in the role; that being said, he is the least interesting of the protagonists. I think most people would agree that Esmeralda is the best character in The Hunchback of Notre Dame. Esmeralda is beautiful, of course, and she’s smart and fast on her feet. But her best quality is something that sets her apart from Disney’s other female leads: she’s defined by seeking justice. She always stands up for and protects oppressed people. It makes perfect sense that every guy in this film is enchanted by her, because she’s amazing in nearly every way.

The music in The Hunchback of Notre Dame is absolutely amazing. The score and songs are both powerful and epic. The only bad numbers are sung by the gargoyle characters, but I’ll come back to that. It’s very hard to choose a favorite song. “The Bells of Notre Dame” and “Hellfire” have a grand, beautiful darkness to them that’s just astoundingly powerful; “God Help the Outcasts” and “Heaven’s Light,” on the other hand, are sung respectively by Esmeralda and Quasimodo. They’re not as dark in timbre but there’s certainly a sadness in saying that God values some people more than others or that suddenly, after years of lonely misery, you’ve found one person who is kind to you. The animation is also beautiful, and some parts are among Disney’s finest work! The point is that this is a pretty dark and serious movie overall. 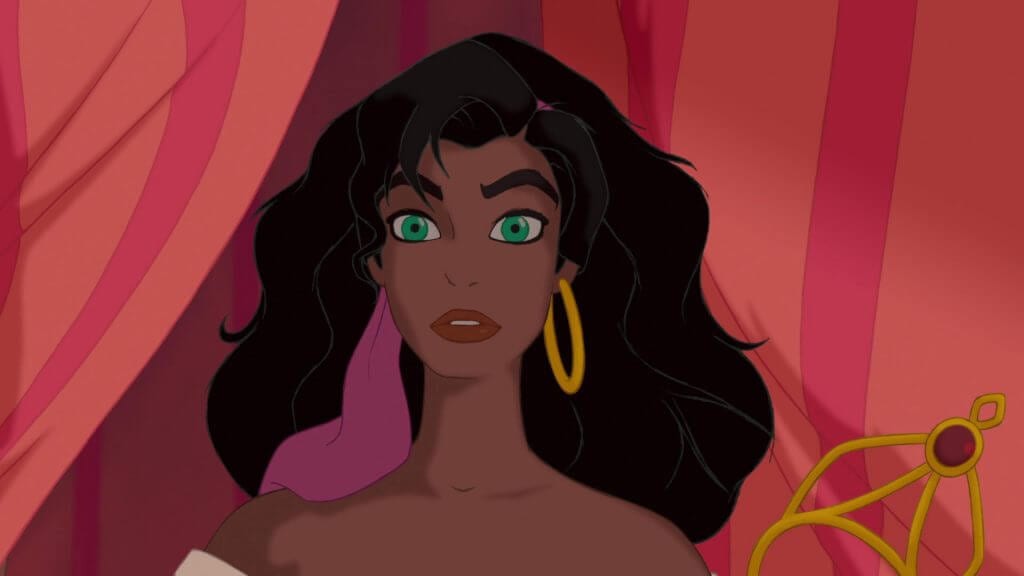 Except for the gargoyles, who nearly ruin the whole thing. I mean it; these guys are ridiculous. And I don’t find them funny; I find them annoying. Their scenes are strategically placed to release tension at key moments in The Hunchback of Notre Dame, and their songs are the film’s low point. The most redeemable one is Laverne, who actually offers advice to Quasi. But Victor and Hugo (Get it? Get it?) are just goofs obviously designed to keep the film at a G rating.

I love The Hunchback of Notre Dame. It’s a source of frustration, because without the gargoyles this would be one of Disney’s better movies. It feels like in the end, Disney was just too afraid to make a movie that wasn’t childish enough. I think that’s ultimately why the film wasn’t a huge financial success; it tries too hard to be silly for the kids and substantial for the adults, and audiences didn’t know what to make of it. But, then, most people don’t see Disney movies for genocide and criticisms of extreme religion, so call me a weirdo.