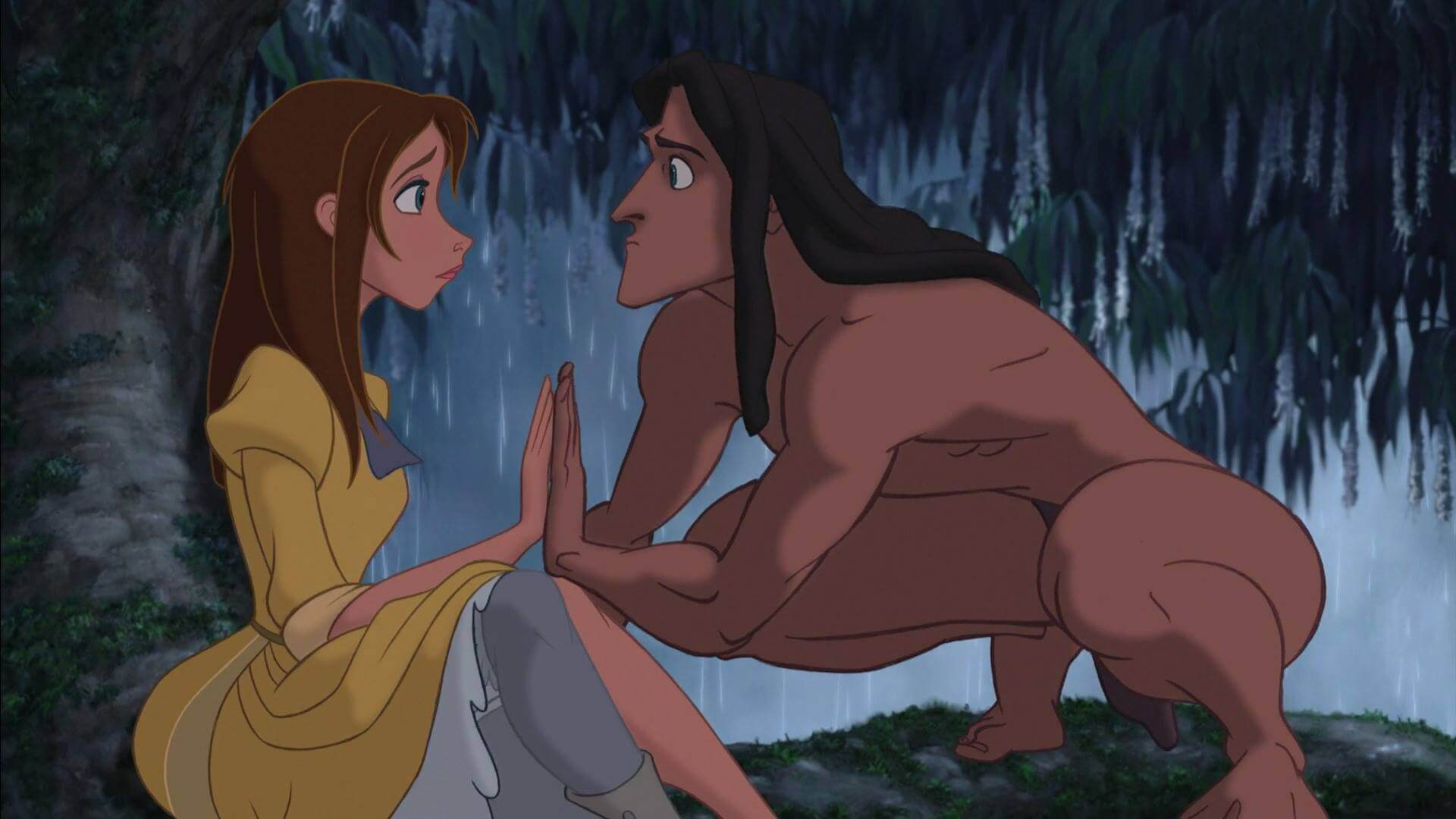 “No matter where I go, you will always be my mother.”

Edgar Rice Burroughs’ Tarzan novels may be among the most frequently adapted literary works of all time. Games, comics, movies and TV shows have been spun off from the books since almost the very beginning. Disney’s Tarzan is one of many such adaptations, this one of the first in the series of stories about the Ape Man. In this movie, an infant Tarzan is rescued and raised by a gorilla named Kala after Sabor, a leopard, kills his parents and Kala’s baby. While most of the apes grow to accept and love Tarzan, he is considered weird by some of his peers, and Kala’s mate Kerchak wants nothing to do with him. As he grows, Tarzan uses his ingenuity and flexibility to keep up with the apes, but even defeating and killing Sabor isn’t enough to win Kerchak over. Then Englishwoman Jane Porter and her father arrive on an expedition to find gorillas, and after getting to know them, Tarzan feels torn between the apes who raised him and the humans who look like him. 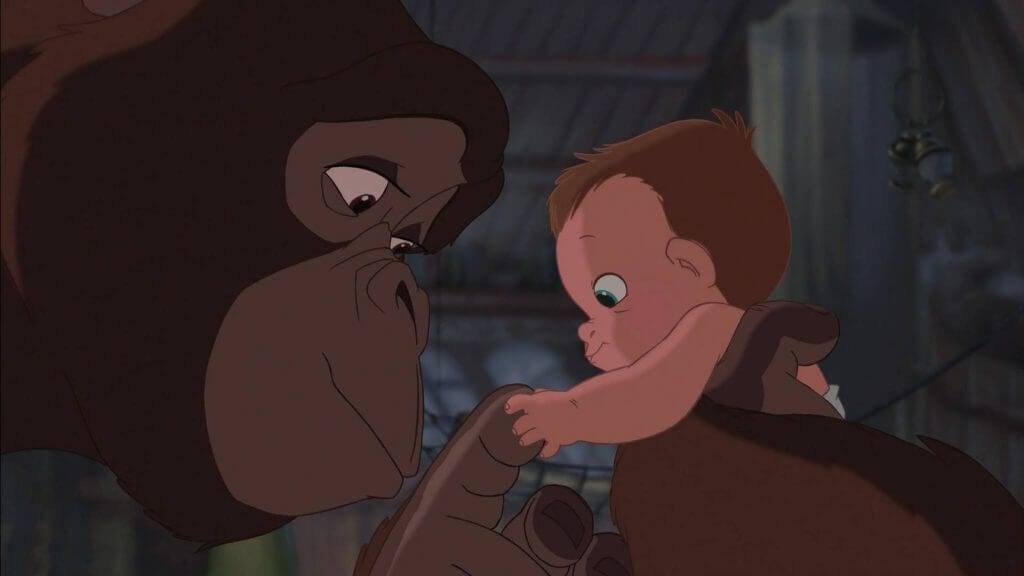 This adaptation makes a lot of changes to the original story. In the novel, Kerchak and Kala were not a couple, so Tarzan didn’t seek Kerchak’s acceptance as his son. Jane and Archimedes are American, not English, in the novel, and Jane is supposed to be a blonde. Clayton was not only friendly in the novel, but he is Tarzan’s cousin. Sabor is a lioness in the original book, while in the, film she is a cheetah. Suffice it to say, Disney took the usual creative liberties in adapting the story. Some of the choices, like making Clayton evil and not engaged to Jane, are almost required to fit the Disney formula. However, changing Jane’s appearance and nationality was probably just done for aesthetic reasons, as it doesn’t add to her character or the plot. Overall the film gives the audience exactly what one should expect: the Disney version of the story, not really ERB’s Tarzan of the Apes.

Disney usually opts for the emotional and focuses on the relationships between the characters, and that’s certainly the case here. Kala is one of the best mother figures in any Disney movie, and I like that they explore the mother-son bond through her and Tarzan. That’s unique, as Disney usually focuses on a father-son or father-daughter relationship, with the mother either dead or in the background with little dialogue. And Glenn Close really nails the role; you can hear her love and protectiveness towards Tarzan in her voice.

Tarzan’s romance with Jane is handled really well too. It’s not the film’s main focus, unlike a lot of Disney movies, but it’s worked in effectively. Tarzan’s getting to know Jane leads to some of the best scenes in the movie, like when he touches a human hand for the first time, and when Jane shows him pictures on the projector. He also shows her the wildlife and different areas of the jungle, and they bond over a shared kinship with animals and what each can teach the other. I really like Minnie Driver’s quirky performance here. Jane is vulnerable, awkward, anxious, and completely useless in the jungle. She’s an artist and a lady, and as such she tends to be a damsel in distress, particularly earlier in the film. I really admire that, though; one of the best things about Disney is how different their characters are, and after the fiesty and hyper-sexual Esmeralda and Megara, and China-saving Mulan, I think it was a really interesting choice to have such a timid leading lady. It works for this movie, and Jane’s faults make her more believable and endearing as a character. Tony Goldwyn plays an understated and emotionally complicated Tarzan; I count him alongside Tom Hulce as Quasimodo for under-appreciated lead performances in Disney movies. You constantly forget it’s just a performance, and that there’s even an actor there. 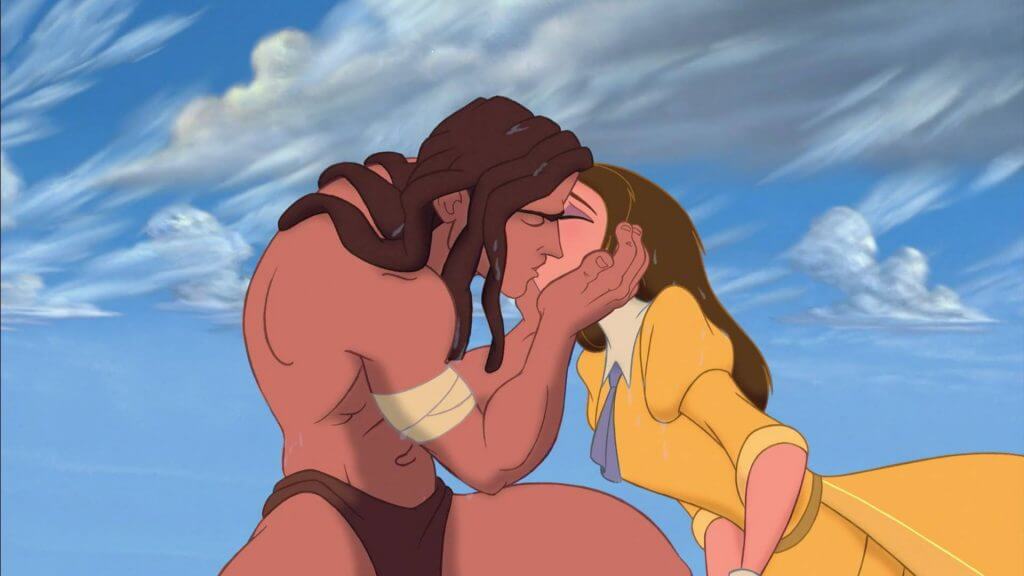 However, one element that sticks out is Tarzan’s desire for Kerchak’s approval. This subplot doesn’t work as well because Kerchak is barely in the movie, and up until the very end he is at odds with Tarzan. All we really know about him is that he wants to protect his family and that he sees Tarzan as a threat to that. Kerchak doesn’t soften towards Tarzan until he’s literally dying, telling him he is one of them and that he is Kerchak’s son. This is really weird timing; Tarzan has spent the entire movie proving himself worthy, but Kerchak doesn’t accept him until he saves the gorillas from a threat Tarzan is directly responsible for: Clayton and his thugs. They had a good idea here but the execution is just wrong. Speaking of Clayton, Brian Blessed is hilarious in this movie, but once he’s revealed as the film’s antagonist he gets boring fast. I really like how they handled his death scene, but greed just isn’t a fun motive for a villain. And like Kerchak, Clayton isn’t in the film a whole lot. With these two characters I feel like they either should have added more screentime and background or gotten rid of them entirely.

The music in this movie is absolutely gorgeous. The score by Mark Mancina is lush and emotionally provocative to match the setting and story. It’s not all that distracting and may not even be noticed, but I think it’s good enough to listen to on its own. The songs by Phil Collins are also excellent and flow well with theplot. My favorites are “Son of Man” and,l most especially, “Strangers Like Me,” which accompanies one of the film’s best scenes.

The animation is not only visually stunning but technically groundbreaking. A new animation program called deep canvas was created to allow the three-dimensional look of the jungle. Tarzan’s design was done by Glen Keane, also responsible for designing Ariel, Beast, Aladdin, Pocahontas, Long John Silver, Rapunzel and many more. Having already designed many of Disney’s most beloved characters, Keane studied human anatomy obsessively to give Tarzan realistic muscles and movements. The results are amazing; Tarzan looks human without being too realistic and becoming creepy. The blues and greens of the film are beautiful and visually interesting, with Jane’s yellow dress and Sabor’s fur adding splashes of variety. I’d go so far as to say that, along with Sleeping Beauty, Beauty and the Beast and The Lion King, this is one of the most gorgeous films they’ve ever made. 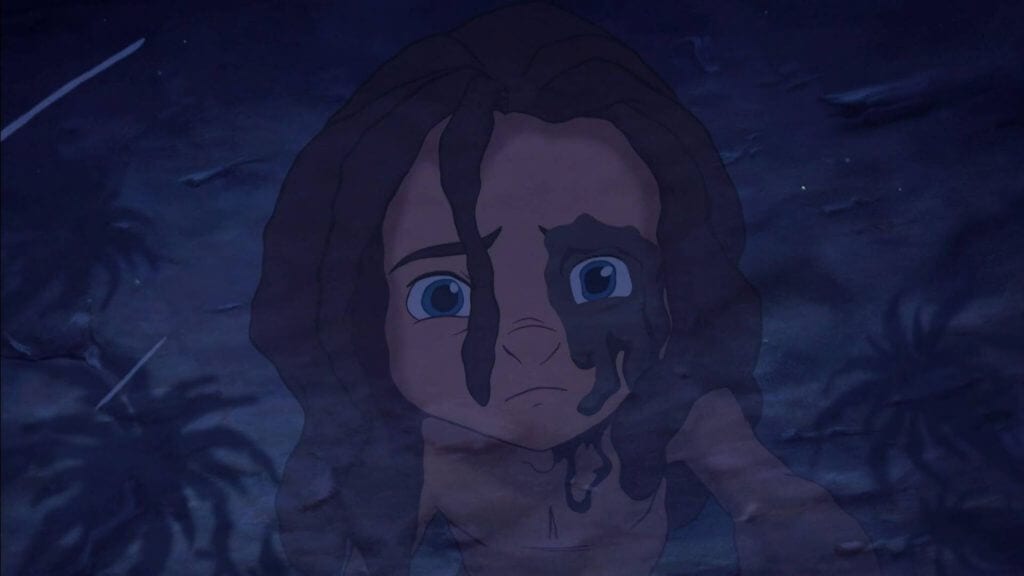 I have a few problems with Tarzan, but I still consider it a winner. It packs an emotional punch, the main characters are memorable, and visually it’s to die for. In some ways it would be better if they hadn’t stuck so close to the Disney formula, but for Disney’s version of the Tarzan story it’s pretty damn good.

I have a few problems with Tarzan, but I still consider it a winner. It packs an emotional punch, the main characters are memorable, and visually it’s to die for.