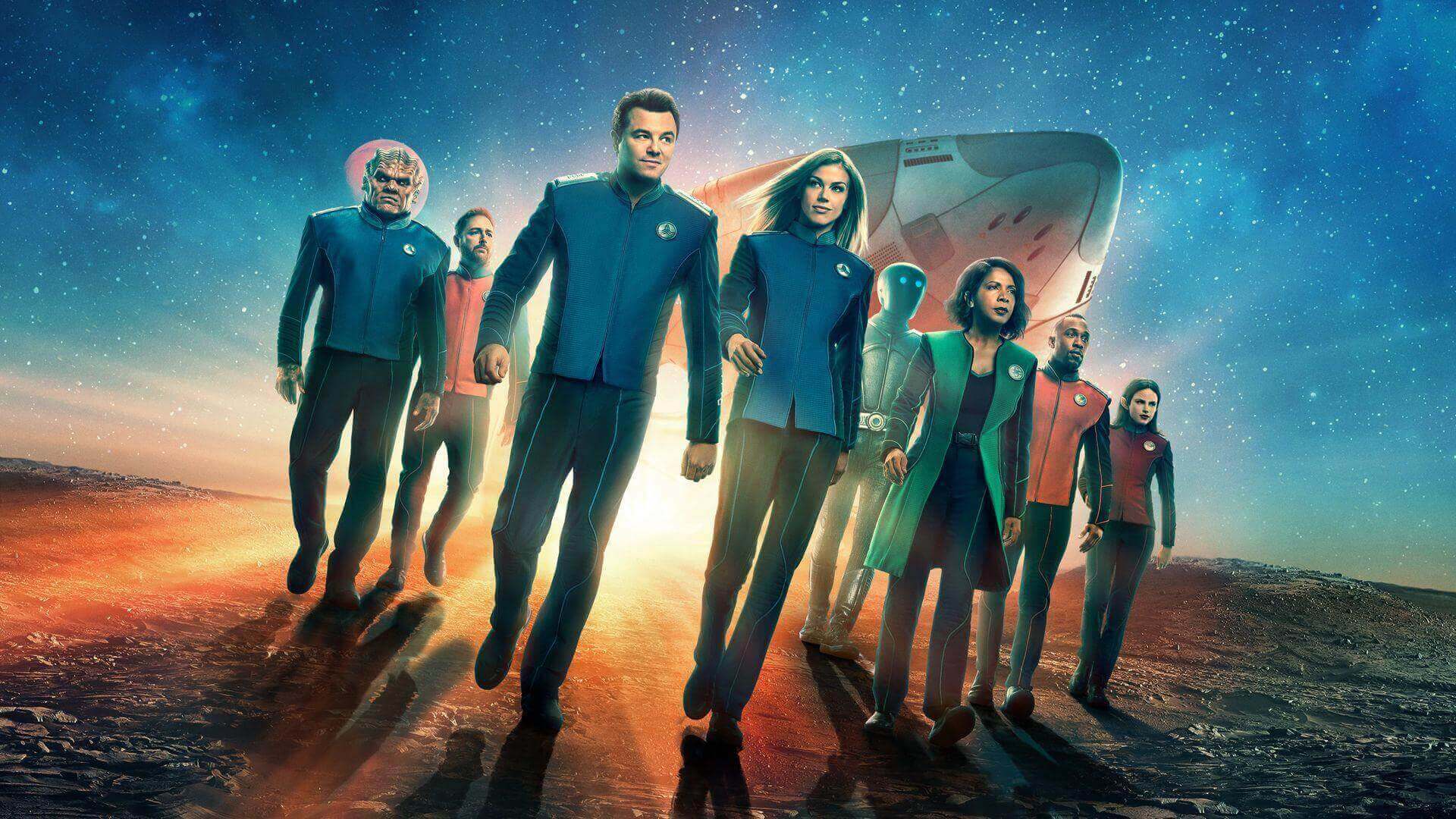 After a year-plus-long wait – a tough pill to swallow when the show in question is on network television – The Orville has finally returned. I watched the series premiere last September expecting a Star Trek spoof with Seth MacFarlane’s particular brand of humor (which many have soured on, I guess, but it still appeals to me). And that’s what The Orville delivered – or, at least, that’s half of what it delivered. The other half was a loving homage to Gene Roddenberry’s vision, a look into a future that, while far advanced and approaching utopic harmony, still gave way to moral quagmires and ruminations on the nature of humanity and civilization. Almost as quickly as it began, The Orville became one of my most anticipated series, if not the show I looked forward to most of all. (It helped that The Flash was having an off year.) I was convinced it would never last; the premise seemed too niche to really catch on with viewers, most of whom, I assumed, wouldn’t know what to make of the tonal shifts. But here we are, beginning season 2 with the low-key, character-driven “Ja’loja.”

Bortus requests that Ed set the Orville on course for his home planet of Moclus, where he must perform a yearly ritual called Ja’loja. Ed tries to cope with Kelly’s rejection of him when she tells him she’s started seeing someone else. As Isaac grows closer to Claire’s family, older son Marcus begins a rebellious stage of adolescence. Alara considers broadening her horizons to keep from being alone.  A new dark matter cartographer beguiles Gordon.

In another brilliant marriage of drama and absurdity, “Ja’loja” uses a ridiculous premise – Bortus having to return home for a yearly urination – as the vehicle through which to explore the characters and their lonely hearts. (I imagine MacFarlane and his writers had the pon farr ritual from the Star Trek episode “Amok Time” in mind when they came up with “Ja’loja;” interestingly enough, “Amok Time” was also the second season premiere of its sci-fi show.) While he serves as the catalyst to bring out the rest of the crew’s heartache, Bortus actually has the least to do in this episode, with the possible exception of John. He does, however, serve as the lightning rod for some of the better comedy bits, most revolving around the crew trying to act like an annual ceremony centered on peeing off a cliff is not amusing. But the real meat of the episode belongs to Bortus’ friends.

Ed is taking Kelly’s new relationship about as well as you’d expect him to; he’s drinking a lot, being passive-aggressive, and doing the science fiction equivalent of standing outside his crush’s window. The Orville wisely chose to keep Ed and Kelly apart at the end of last season, but “Ja’loja” doesn’t push the characters backward. Ed makes no secret of his feelings, telling Kelly several times that he loves her. Kelly is being cagey, refusing to give him a definitive yes or no when he asks if she reciprocates his feelings (which is an answer in itself). In fact, Kelly seems unnecessarily cruel towards Ed, threatening to leave the Orville if he doesn’t get over his infatuation and pushing for Ed to be friends with her new beau. Even the boyfriend, school teacher Cassius, thinks she’s being too hard on Ed, which ends up putting him in the doghouse. The thing I probably like least about The Orville is the need to seemingly always make Kelly right, even when she’s clearly wrong. They went so far as to take away her adultery last year by suggesting Darulio was controlling her mind (although it hasn’t exactly been confirmed, and Darulio seemed like he might’ve been lying to them to spare their feelings), and every step of the way Ed is made out to be the villain. Now the same is happening to Cassius, who seems like a genuinely good guy. And the lesson Ed imparts on him is to just give in to Kelly’s unreasonable tantrums, no matter what? That doesn’t sound like a healthy relationship to me.

But maybe that’s the point “Ja’loja” is making. On the surface, we see Ed displaying that he is the perfect match for Kelly by knowing exactly how to disarm her foul mood and make her feel better (including advising Cassius to be an idiot every now and then so she’ll feel better – good God, what a nightmare she must be in a relationship). In turn, Kelly sees in Cassius all of Ed’s virtues, as well as his shortcomings, like a dedication to his career. What if the real moral is that people like Ed and Kelly are better off apart? There is some evidence at the end that Ed is about to attempt moving on with Lt. Tyler, but the real connection I noticed is the one he makes with Alara in the beginning, noting how they’re both more alike than anyone else on the Orville. There were hints of this in season one as well, such as Alara saying Ed was the only guy on the ship not threatened by her super strength, and Ed’s refusing to let Alara give up on herself when she thought about leaving. I doubt it, but part of me wonders if the Moonlighting setup between Ed and Kelly has been misdirection and what Ed really needs is someone who can open a jar of pickles for him.

Speaking of my other favorite character, Alara’s inability to get a relationship off the ground resurfaces in “Ja’loja.” (Are all the men on the Orville crazy or something?) Bortus informs her that it is preferable to attend the Ja’loja with a date, something Alara can never seem to land. To help her, Bortus offers to fix her up – to put it mildly – with a member of his team who is also single. Alara agrees, mostly out of curiosity, and finds herself set up with Dann, the giant-craniumed green alien. She’s put off at first, but he convinces her to give him a shot in the hopes that trying something new might let her discover the happiness she’s found so elusive. The date goes horribly and hilariously wrong (that poem!), but perhaps it still sets her on the right track. Maybe Alara does need to consider someone she never has before. But not Dann.

The other major relationship explored in “Ja’loja” is not a romantic one. Claire and Isaac are still figuring out the dynamics of their growing kinship. Isaac continues to form a fatherly bond with Ty and Marcus, but he remains something of an outsider to the Finn family, despite being let in to the extent he has. When Claire and Marcus butt heads over Marcus’ misbehavior, he criticizes from a logical standpoint, once more failing to grasp the emotional angles of the family dynamic. Yet, in the end, it’s his logical approach to problem-solving that saves Marcus, as he coolly and methodically shows the parents of Marcus’ bad seed new friend who the real troublemaker is. Isaac, Claire and the boys are all learning from each other, and Claire’s request that Isaac attend the Ja’loja as her date is not romantic, but a further acceptance of Isaac as family.

Gordon’s crush on Lt. Tyler is played more for laughs than anything else (and it brings about some great comedy with John), but it looks like it’ll lead to a serious conflict down the road now that Tyler seems more into Ed than his goofy best friend. Once more, The Orville strikes that perfect balance between humor and humanity, with several belly laughs amid all the lovelornness. The cast hasn’t missed a step during the hiatus, with everyone playing their part perfectly (any issues I have with Kelly aren’t the fault of the excellent Adrianne Palicki). I also love seeing great actors turn up in small roles; this time, Jason Alexander makes an unrecognizable appearance as the bartender who notices another link between Ed and Alara. (The character’s name is Olix; an allusion to Star Trek: Voyager’s Neelix?) The Orville itself continues to look suitably like a Star Trek ship, albeit with somewhat lighter color tones to highlight the show’s humor. The only scene outside the ship is the quick one on Moclus, which looks like a volcano; this is a step up from the courtroom we saw in season one, but nothing spectacular. A sight gag involving a shuttle is expertly filmed, though.

“Ja’loja” is a strong season premiere, reacquainting us with the Orville characters we’ve missed for a year and showing us how far they’ve come – if they’ve come anywhere at all. Personal conflicts are brewing, and new relationship directions are teased, all with the backdrop of Bortus having to urinate. Outside of a quick mention of the Krill, no bigger story arcs are present. The focus is solely on Ed and crew, and after a seemingly interminable wait, I’m glad to have them back.

“Ja’loja” is strong season premiere, reacquainting us with the Orville characters we’ve missed for a year and showing us how far they’ve come – if they’ve come anywhere at all. Personal conflicts are brewing, and new relationship directions are teased, all with the backdrop of Bortus having to urinate. Outside of a quick mention of the Krill, no bigger story arcs are present. The focus is solely on Ed and crew, and after a seemingly interminable wait, I’m glad to have them back.