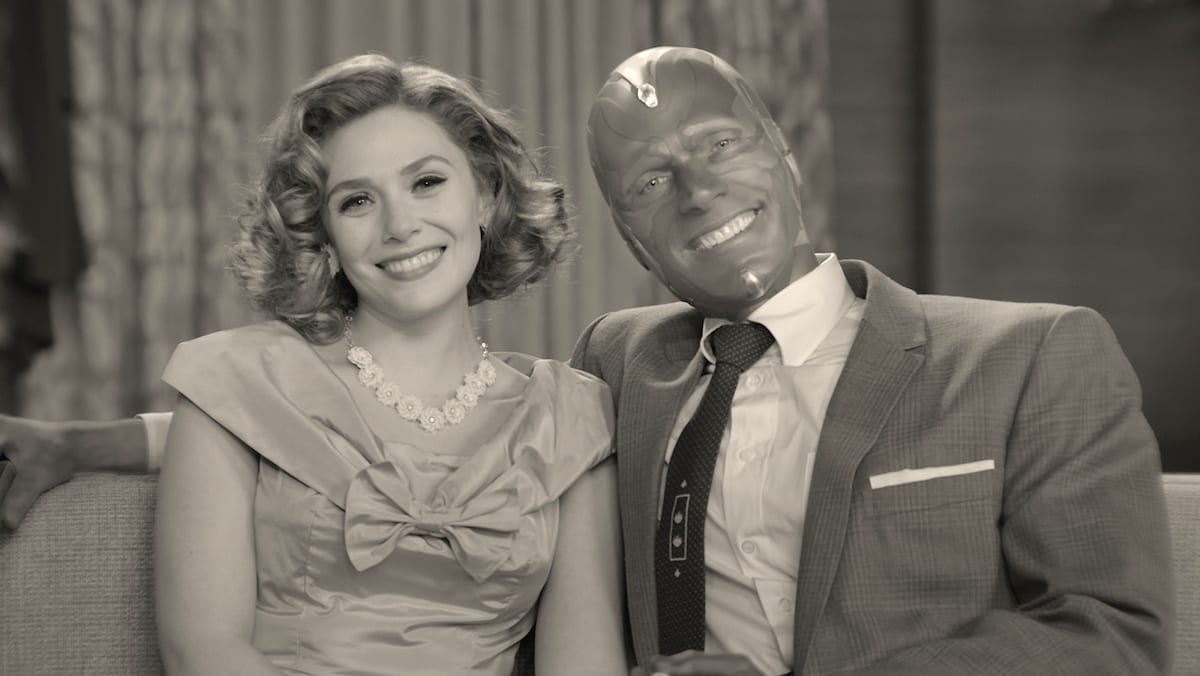 Marvel kicked off its Disney+ shows – and what they must hope will be a more financially stable year – with WandaVision, their ode to television history.  The first two episodes arrived on January 15, with a weekly rollout planned moving forward. I’ll be reviewing them separately to preserve the sequential experience Marvel is going for, so I’m writing this having not yet watched episode 2. WandaVision is clearly an experiment, and while it’s too early to tell how successful it will be, the first episode is a lot of fun and captures the feel of classic television with a slight Marvel flair.

Episode 1 (apparently, they’re not giving each entry a title) dives right into the sitcom world the trailers teased. It is essentially an episode of a 50s TV comedy show, with Wanda and Vision as a married couple – with superpowers – navigating a prototypical sitcom plot. After a few silly references to their powers, they both notice a heart drawn on that day’s date on the calendar, but neither remembers what it means. A wacky neighbor, a stern boss, and the boss’ quirky wife will help them figure it out in 22 minutes.

And I’m not kidding; the “episode” ends at exactly 22 minutes, in keeping with the usual length of a half-hour program, minus commercials. This is a nice touch and one of many elements WandaVision incorporates to maintain the feel of a real sitcom. If you want to nitpick, this is technically inaccurate; the 22-minute time length didn’t start till the 90s, when corporate greed led to the networks selling more commercial time and cutting down the standard episode length. In the 50s, an episode of I Love Lucy or The Honeymooners would be closer to 27 minutes. But there’s no reason to be a jerk; 22 minutes is more widely known as the length of a sitcom today, so it works. There are other flourishes like this: the aspect ratio, the outfits, the jaunty music, the idea that neither one of them would assume that a heart on the calendar on a day that isn’t February 14 would indicate an anniversary.

And that’s all besides the characters, each of whom is perfectly portrayed. Kathryn Hahn is their new neighbor, Agnes, and she’s what passed for sassy back then, the more experienced voice that head-in-the-clouds Wanda needs to fix her situation-comedy mixups. Fred Melamed is Mr. Hart, Vision’s boss (at an office the purpose of which Vision can’t figure out), perpetually angry and constantly looking for reasons to fire people. And Debra Jo Rupp – forever Kitty Forman, and God bless her for it – is Mrs. Hart, the boss’ more open-minded and friendly wife. Each actor is just right for their character, and the sitcom world comes alive as much through their work as through the cosmetic trappings.

At the center are Wanda and Vision themselves. Elizabeth Olsen and Paul Bettany could probably play these characters in their sleep by now, but the rub is that, at least in the first episode of WandaVision, they aren’t playing the same versions of Scarlet Witch and her cybernetic soul mate that they played in the movies. These are those characters fit into sitcoms. Wanda is a little bit June Cleaver by way of Lucy Ricardo, while Vision is kind of a husband archetype from the era, very generic and doofy while his more colorful wife gets the big laughs. Both actors adapt to the setting very well; Olsen overacts just enough to feel authentic without making the comedy too broad, and Bettany convincingly plays the straight man, even when he has to make a fool of himself. The ways their powers fit into their surroundings are funny too and give the episode a bit of a Bewitched vibe (wrong era, I know, but maybe they have to be economical about it), and some of the special effects even feel like they could have come from times past. 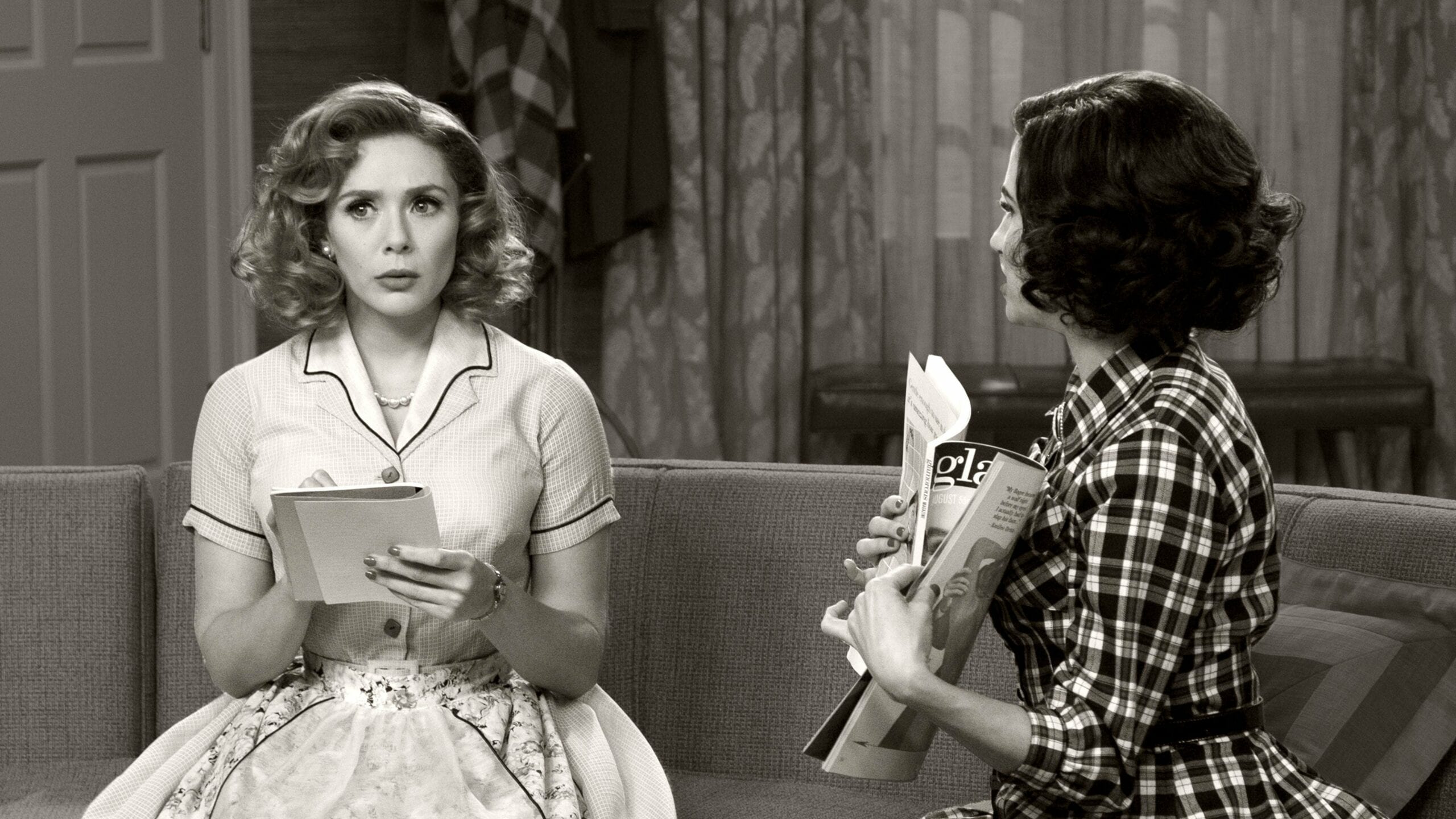 Of course, we know something must be going on beneath the surface, and there are very slight hints at that throughout  WandaVision’s pilot. The ridiculous plot – the super couple has to throw a dinner for Mr. and Mrs. Hart that impresses them, or Vision will be fired instead of promoted – allows for a few reveals. For one, neither Wanda nor Vision knows when they got married or from where they moved to their current home. In fact, they don’t even have wedding rings. And they seem to know this, as Wanda uses her magic to make them a pair of gold bands at the end. And those antiquated special effects give way to more modern cinematic technique when Vision suddenly has to phase through a blocked esophagus and save his boss. Then there’s Mrs. Hart, who acts like a malfunctioning robot when Mr. Hart begins choking; is that because she is some kind of automaton that sprung a gear, or was whatever program they’re in giving them time to resolve the situation?

And the final scene as the credits on the “sitcom” roll confirms that they are in some kind of program, being watched by people who are taking notes about their behavior. This would appear to kill my assumption that this was all an alternate universe Wanda created for herself to cope with Vision’s demise. We don’t know who these people are, what they want, or why they’ve turned Wanda and Vision into regularly scheduled programming, but their Cabin in the Woods vibe will surely permeate the remaining eight episodes, injecting a sense of dread to what will likely be more fun.

And it is fun, at least so far. The first episode of WandaVision is funny, well-acted, and a pleasurable tribute to television history, just as the producers intended it to be. I suppose each week will tackle a different TV era, at least at first, and there’s plenty of fertile ground to mine in that respect. If they’re all this good, WandaVision may just expand the parameters for what we think Marvel can do with its film – and now television – properties.