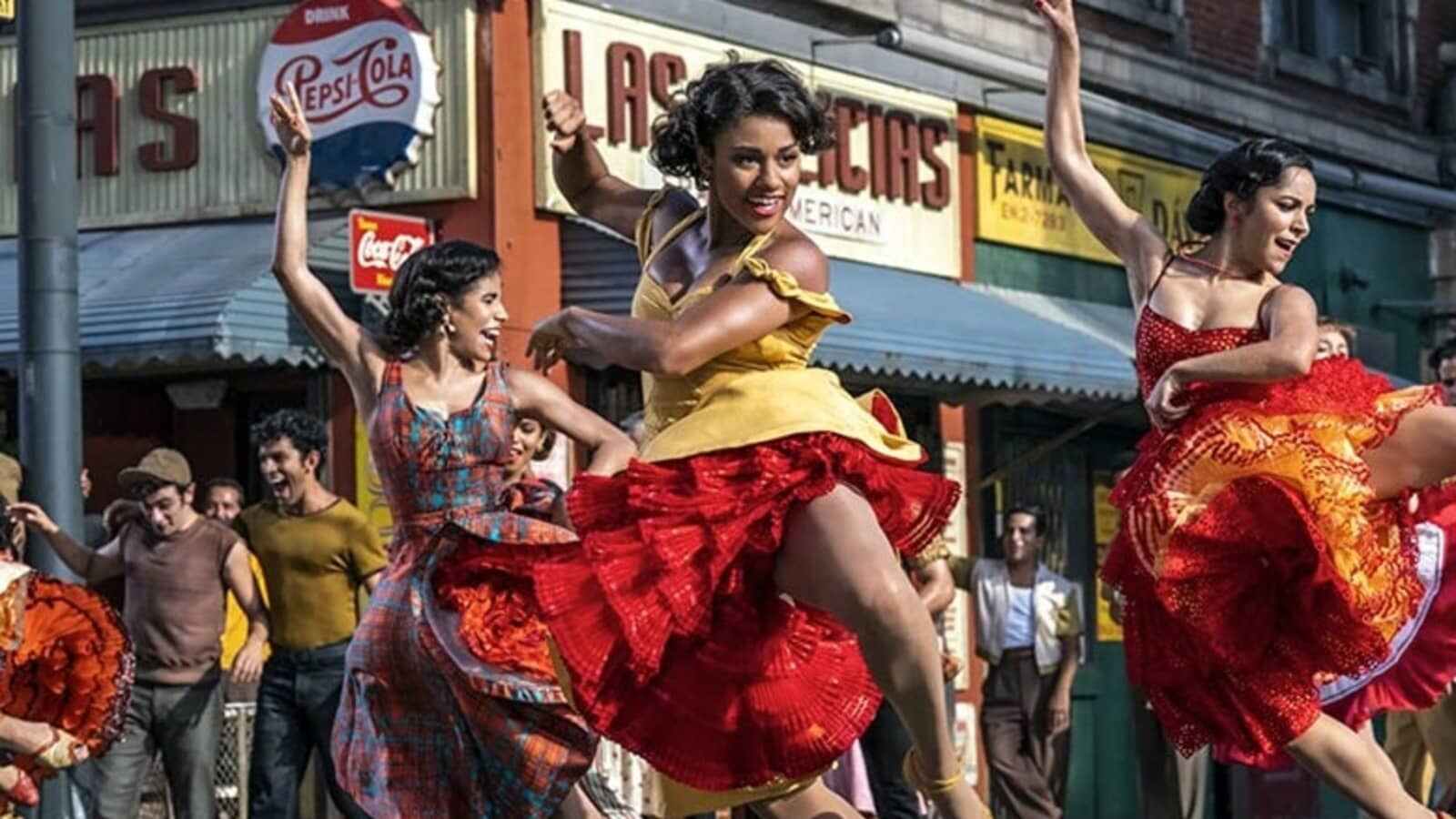 I wasn’t planning on seeing West Side Story. I’ve never seen the 1961 original all the way through, and the subject of racial tensions in 20th century America is well-worn at this point. It takes a lot to make a story like this interesting to me these days, and usually, they don’t even try. Most movies I see about racism and prejudice are boring, failing to analyze where racism comes from and how to truly address it. Furthermore, while I appreciate Steven Spielberg’s filmography and titanic career, I wasn’t familiar with most of this movie’s cast. West Side Story’s closest thing to a draw would be Ariana DeBose (Anita), who I knew from Hamilton, or songs by great American lyricist Stephen Sondheim. I won’t be referring to the original movie much for comparison since I’ve only seen parts of it, and I’ve never listened to/seen any stage productions. Let’s take a look.

Based on Shakespeare’s Romeo and Juliet, West Side Story follows Tony and Maria, a former gang leader and young Puerto Rican immigrant. Tony is cleaning up his act when his old gang buddy Riff asks him to attend a dance designed to bring the white people and Puerto Ricans together. There, Tony’s life changes forever when he sees Maria, the younger sister of Bernardo, the leader of the rival Sharks gang. Is true love enough to overcome prejudice and family loyalty?

This movie is superbly directed, full-stop. The dance sequences are fast-paced and stunning, and the acting is terrific for the most part. The look and feel of this movie make it abundantly clear why Spielberg wanted to revamp the source material; updates in technology and film techniques are everywhere. In “Maria,” when the lights shine on the wet pavement behind Tony, this is particularly noticeable. I wish I had a picture of that scene for an example, because I actually gasped at the visual effect. This film displays small, intimate moments like the fire escape meeting just as effectively as the bombastic musical numbers. Rachel Zegler is absolutely the movie’s breakout star as Maria. She has a lovely voice, and the timid sincerity she brings to the role makes her character the most likable. DeBose is also very good as Anita. In keeping with Spielberg’s bold direction for the material, the acting is excellent all-around. While I haven’t been following this movie closely, I have heard some complaints about Ansel Elgort (Baby Driver, The Fault in Our Stars) as Tony. I’m not sure how he compares to the original actor, but I think he’s very good. He isn’t as impressive as Rachel Zegler, but he does the job and shines during “Maria” and “One Hand, One Heart,” in particular. Those are also among my favorite songs in the movie, along with “America.” 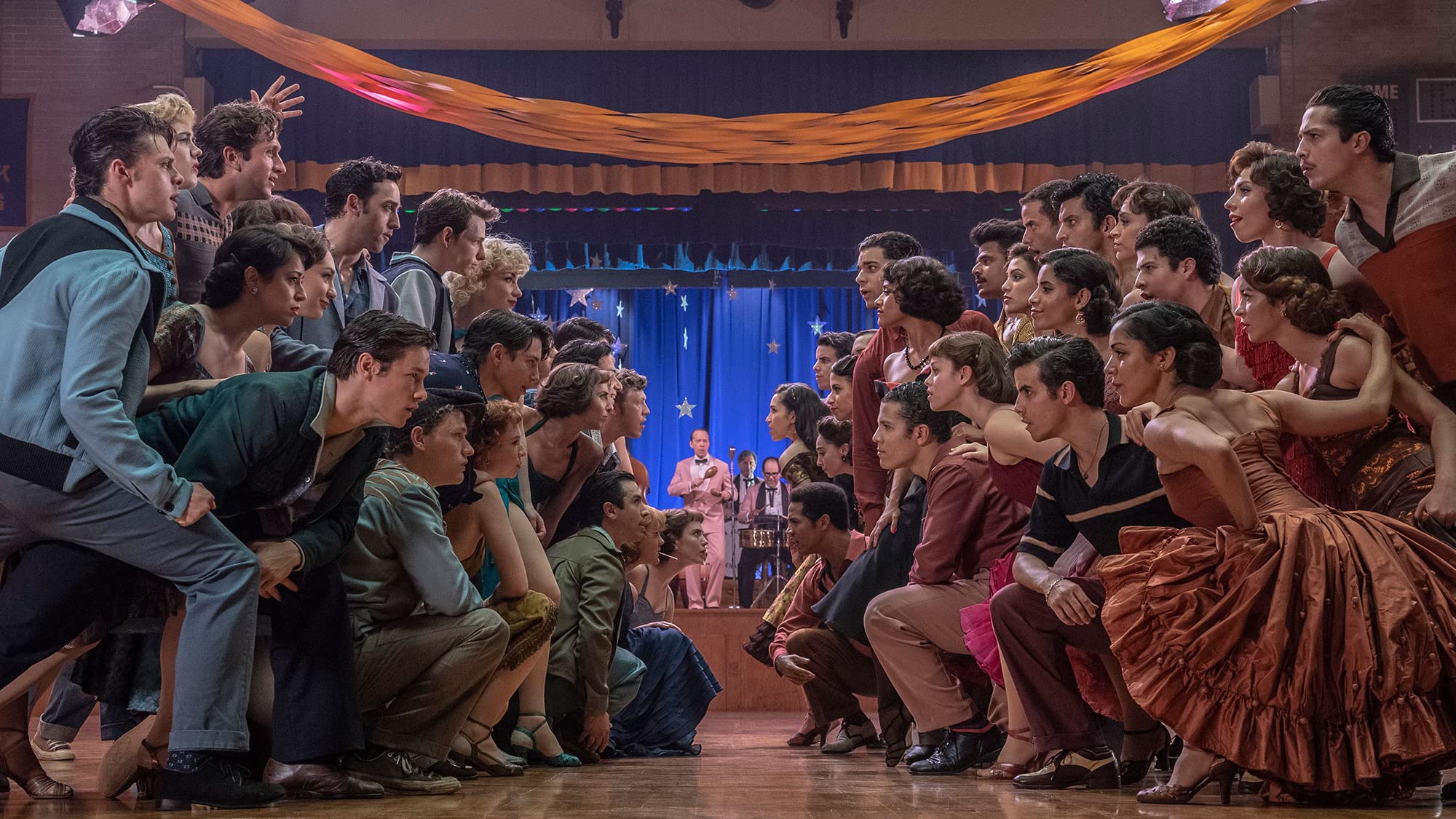 West Side Story is a frustrating movie. The film is a technical marvel with a dedicated cast and a seasoned director’s vision guiding it. I’d normally love a movie like that, but this is where I suspect the limitations of the source material are taking over. The short synopses of West Side Story I’d heard over the years never appealed to me. Knowing Pocahontas was Disney’s attempt at their own West Side Story, for example, wasn’t encouraging. I’m not saying this movie is as bad as Pocahontas, but it has many of the same faults. There isn’t one character in this movie I would describe as interesting or fleshed-out. Tony is probably the closest, a former gangster seeking a better life and finding love along the way. But the movie doesn’t really delve too deeply into this, probably because of when the original was written. I struggle to reconcile the violent killer who led the Jets with the tender songbird who falls for Maria. Rather than writing a multi-faceted, complicated man, it feels like the writers chose one extreme character trait to give a guy who otherwise seems normal and even sweet. We don’t understand Tony, so his behavior makes little sense. 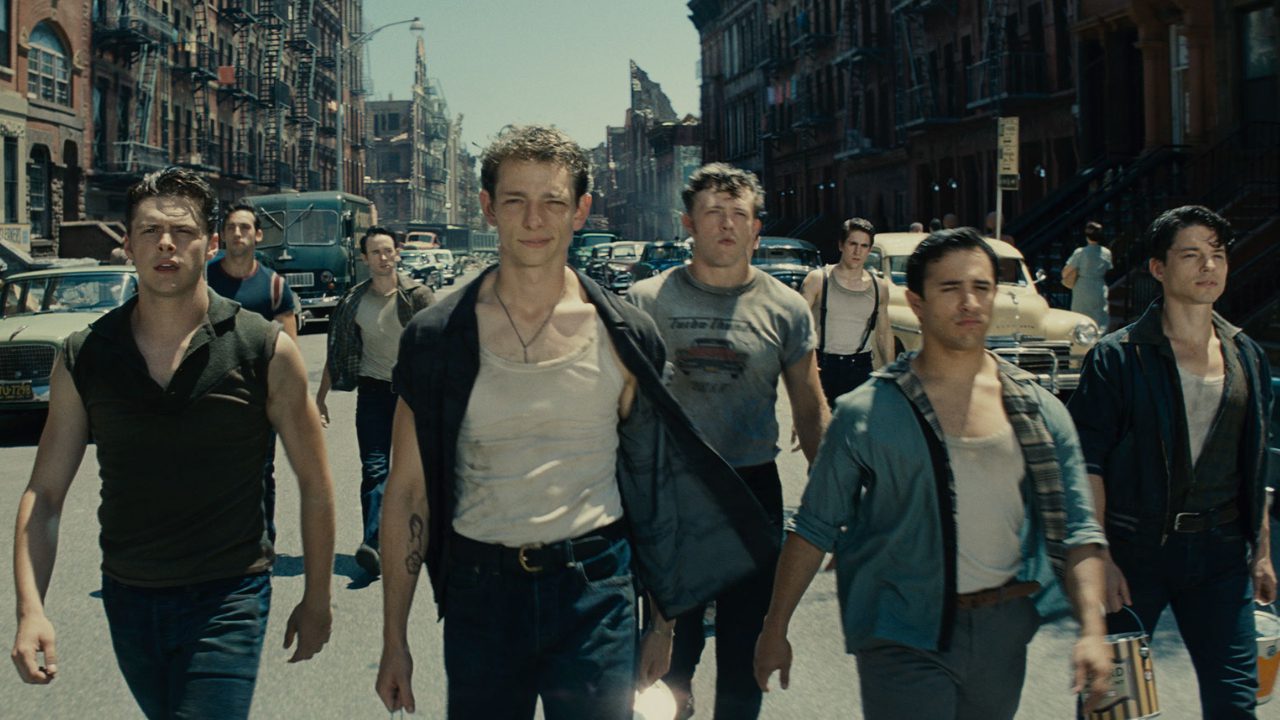 Many of the characters in this movie simply don’t behave in ways that make sense for their situations. I don’t necessarily think movies should be realistic, but characters’ actions should make sense for their surroundings and personalities. When Maria finds out Tony has killed her brother, she doesn’t seem upset enough with him. Although it’s a different kind of movie, I think of El Cid (1961), in which the protagonist is forced to kill his lover’s father in a matter of honor. She still loves him but, naturally, feels conflicted and enraged after what happens. Maria is devastated by Bernardo’s death but forgives Tony far too quickly, insisting he not turn himself in for it. As the audience, we know there were mitigating circumstances in the fight that led to Bernardo’s fate, but Maria doesn’t know that. She has no reason to be so soft towards Tony at this moment. The only character who makes any sense at all is Anita. Her actions are infuriating and cause a lot of problems in the end, but at least she’s reacting to what’s happened in a logical way. I still don’t like how Bernardo’s death changes all of her beliefs about America, though. That seems a little cartoony. 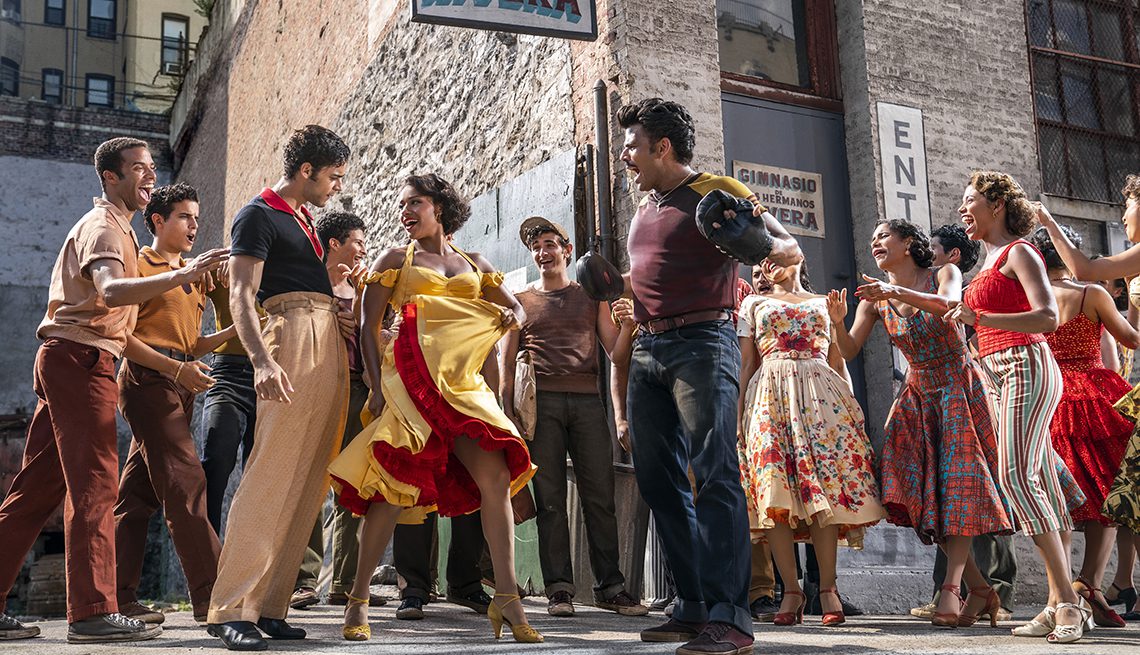 And that’s how I would describe West Side Story: cartoony. I love musicals, and I love a movie with a strong sense of style, but wow, this is not for me. The romance between Tony and Maria feels incredibly forced because we know so little about them. It feels a lot like a fairy tale; they meet at the dance, and Tony is immediately smitten. It doesn’t work in this setting, though. Almost all of the major male characters are criminals, and the ones who aren’t are racist cops. Whose side are we supposed to be on? Tony is a boring character with a dark past we learn too little about. No gang members on either side come out great in the end, and their final decisions aren’t set up or earned in any way. Maria is the movie’s most likable character, and Tony comes nearest to being interesting. Still, neither the dialogue nor the songs seem interested in building their relationship or developing them as individual characters. I really don’t think juxtaposing fairytale logic and emotions with a realistic, recent setting like this works at all. What is the story saying about the medium? Why envision racism in America as a Shakespearian fairy tale? It all just comes off as shallow and empty. 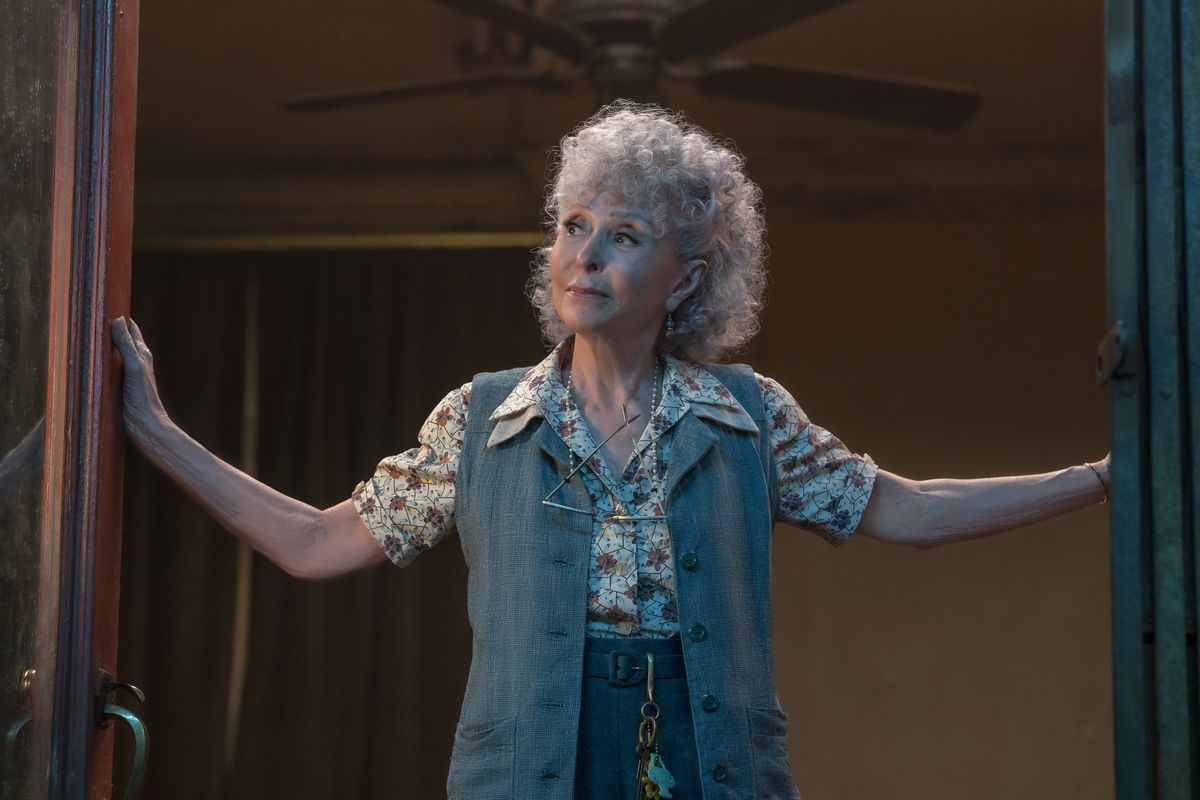 Great musicals, and especially subversive ones, use the medium as an advantage. Les Miserables uses the melodrama of the stage to delve into the thoughts and feelings of its characters in ways a novel can’t. In Hamilton, the contrast between the narrative devices and musical styles creates much of the experience. Stephen Sondheim was a brilliant playwright, and I love a lot of his work, but seeing/hearing this one for the first time, I feel like I’m missing something. This film is visually stunning, and some of the songs are seriously catchy, but the story and characters are simply dull.

West Side Story highlights the technical prowess of a master director and displays the talents of numerous deserving performers. However, all the glitz and passion can't cover a well-worn story with dull characters.