Home  /  Social  /  Scientific American: Why the Term “JEDI” is Problematic

Scientific American: Why the Term “JEDI” is Problematic 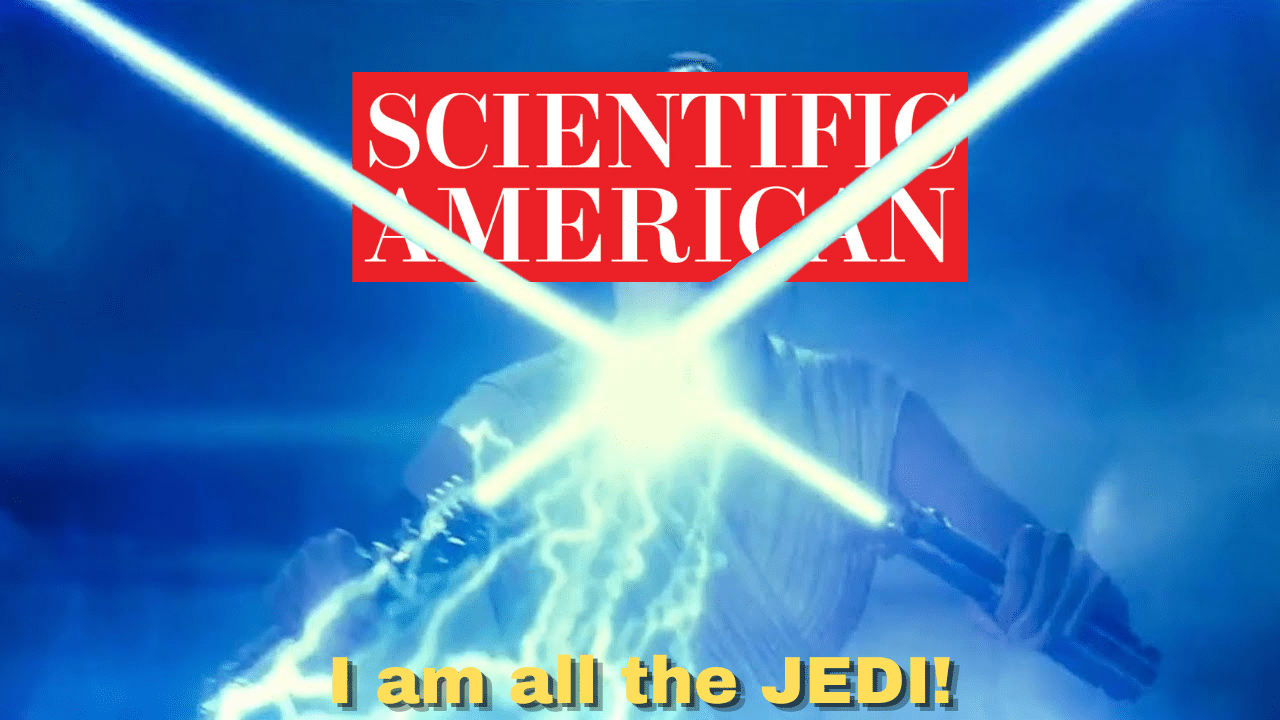 When asked, “How do you define Jedi?” do you immediately leap to reference the social justice literature? If you don’t, perhaps you are doing it wrong.

Fresh off their successful endorsement of a presidential candidate for the first time in their 175-year history, Scientific American is taking the opportunity to have the difficult discussions and thoughtful debate about what it means to be a Jedi. Scientific American… Star Wars… peak 2021.

Co-opted by weirdos in academia and industry, J.E.D.I. now means Justice, Equity, Diversity, and Inclusion, because of course it does. If you seek clarification about how these words are used in the proper context, just manifest the most ideological positions possible, and you can approximate something close enough to the nauseating reality.

According to the fine folks over at Scientific American, the term “JEDI” is too problematic in its current form; ergo, it requires social justice appropriation to make it more inclusive for those who wish to wield the moniker. Obi-Wan, Qui-Gon, and Luke are simply “inappropriate” for the new, reformed, and repurposed JEDI Order. Just when you thought the franchise was sufficiently dead and buried…

JEDI is not the only term that gets a reformatting in this article; in fact, the colloquial characterization of the science, technology, engineering, and mathematics fields of higher learning get morphed into STEMM (adding on “medicine,” because that’s different than “science”?) in the first sentence. We are off to the races.

By the logic of J.W. Hammond, one of the authors of this “piece” (Hammond is a postdoctoral researcher and teacher of rhetoric, writing, and racial justice. Very important work. He is also a “[nearly] lifelong Star Wars nerd”), it was important for the audience to know that JEDI had more than just an elitist usage; in fact, it shares a name with famous characters in the 5th highest-grossing franchise of all time (behind Pokémon, Hello Kitty, Winnie the Pooh, and Mickey Mouse & Friends), Star Wars. How insightful. Jedis are known for being paragons of goodness and principled guardians of the innocent, per the authors, but that is not the direction these people wish to take the word. The term JEDI, as they continue, can “inadvertently associate our justice work with stories and stereotypes that are a galaxy far, far away from the values of justice, equity, diversity, and inclusion.”

There are five major points the collaborators of this nonsense wish to discuss. We shall break them down accordingly.

“The Jedi are inappropriate mascots for social justice.”

The argument for the hypothesis is that the Jedi, the actual ones, not the language subverters’ desired reframing, are “inappropriate mascots for social justice.” Couldn’t agree more. Their rationale is that they are a religious order of “intergalactic police-monks, prone to (white) saviorism and toxically masculine approaches” to getting their tasks accomplished. Citing clashes with “phallic lightsabers” and gaslighting through “Jedi mind tricks.” I’m unaware of any sword that isn’t cylindrical in nature, so weird complaint. And it’s called brainwashing; get it right. Using the allegory of midichlorian counts to other similar immutable characteristics is a bit of a stretch too far; just use Force Pull.

I’d say the past ten years or so, but I doubt that’s what is meant here. Apparently, the Slave Leia costume alone dabbles in sexism (obviously) and engaging in an “Orientalist subplot”? How about conflating “alienness” with “nonwhiteness”? But Chewie always rode in the front; I don’t get it. Also, capping off the sexism, racism, and ableism trifecta, portraying Darth Vader as inhuman and a moral deviant by, get this, “presenting his technology-assisted breathing as a sinister auditory marker of danger and doom.” I’ll tell you what; when I hear those noises in real life, I’m not threatened by a 2-pack a day chain smoker attached to an iron lung, but if the panting after a light jog freaks you out, that must suck.

Without being the biggest Star Wars fan in the world, it’s tough to rationalize the thought process behind thinking that most of the characters, in a historical context, have been white men. That is a hilarious argument to make if you simply watch any of the films or anything from the Extended Universe, but hustlers gonna hustle. Speaking of which:

I think we know who is being referenced in the most glowing of terms.

What an interesting case study in mental gymnastics. By subverting the meaning of JEDI and repurposing it for social justice terrorism, the ghouls in academia are somehow doing Disney a favor? It’s apparently a form of free advertisement (something one of the richest franchises is gagging for, certainly) to use the term completely differently. That’s like saying you’re going to “hammer” your hot date tonight and giving props to “Stanley Tools.”

As the segment winds down, in doing Disney a favor such as this, they already know that Disney is “an overtly political entity,” something that can definitely be agreed upon. But by forging a relationship over the multivariate use of Jedi/JEDI, it’s a “dangerous co-branding strategy for justice advocates and activists.” Okay, the only people who would have known about this acronym before this redundant thinkpiece were those who had been indoctrinated into the Church of the Woke, so how dangerous is it really to preach to the choir about the benefits of social justice?

Apparently, the visual manifestation of memorabilia in computer science classrooms can reinforce masculinist stereotypes about computer science; ergo, women most affected. But according to the United States Census Bureau, in 2021, 27% of STEM workers are female, so it’s not a very big group to be pandering to, to begin with. Also, how much intersectionality work gets done in a research lab?

“The abbreviation JEDI can distract from justice, equity, diversity, and inclusion.”

Once again, why not just stick with “DEJI” or “JDIE”? Much more the latter, if your name is John, Jason, Jennifer…

Instances such as this subversion attempt seem to be coming up more and more lately. Clearly, it’s a sign that bullying needs to come back into the world. Pretending to be a Jedi was reserved for playtime with your friends in grade school or a costume for Halloween; not a label for the mentally compromised academics that want nothing more than ruin everything once lauded as exceptional in the world, knowing they aren’t good enough to accomplish anything of note on their own.

If that’s what their selling, sign me up. Plus SITH have cooler force powers.

The word Jedi comes from Sengoku Jidai, a period from the japanese history.
Obi Wan Kenobi once said “only the Sith deals in absolutes” and I don’t think that none of the Dark Lords of the Sith would want to be associated to the Social Justice Warriors.

All of that’s really cool, but Scientific American told me it’s ‘ackshully’ Justice, Equity, Diversity & Inclusion. I follow the Science.

The word Jedi comes from Sengoku Jidai, a period from the japanese history.
Obi Wan Kenobi once said “only the Sith deals in absolutes” and I think that none of the Dark Lords of the Sith would want to be associated to the Social Justice Warriors.

I put together a video response to this if anyone wants to watchhhh https://www.youtube.com/watch?v=OSTM2q7ljZM&t=315s