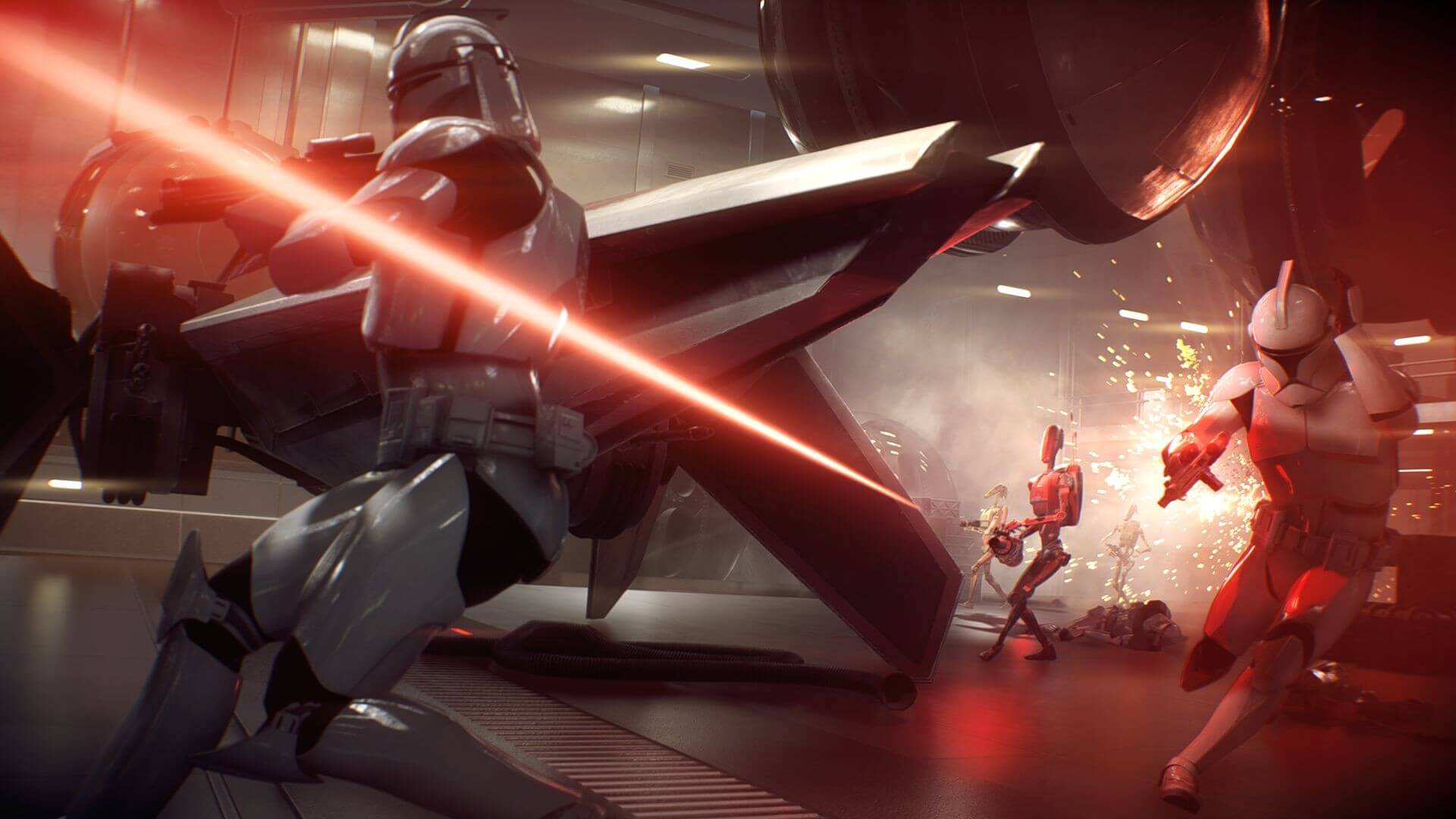 When EA and DICE put out 2015’s Star Wars Battlefront reboot, some were disappointed by the lack of a story-driven single-player mode, criticized its weak progression system and how its season pass DLC model separated the player base. I, personally, had a blast with the game. Up until that point, I had never experienced a game that truly dropped me into the world of Star Wars the way DICE’s game had. I had a blast taking down Rebel scum and blowing AT-AT’s to a smoldering pile of scrap. With that in mind, Star Wars Battlefront II (2017) improves on everything that DICE did right and added a bunch of new content for Star Wars fans to sink their teeth into.

The multiplayer returns, better than ever, with impressive 40 player matches, epic space combat, and a retooled Heroes Versus Villains mode. For me, Galactic Assault is my favorite mode. Galactic Assault apes DICE’s Battlefield 1’s Operations mode, pitting the two teams against each other with one side attempting to complete objectives, the other trying to throw a wrench into their plans. It’s fun stuff, and the scale of these battles really accentuates the “war” in Star Wars. The map design is great, from the jungles of Kashyyk to the chaotic Death Star II. There’s variety, and it all looks stunning in DICE’s Frostbite engine. The fire effects, lighting, and texture work here make for an absolutely gorgeous and authentic environment to live out your battle fantasies. After many hours, I haven’t gotten bored of blasting away Separatist Battle Droids or Resistance fighters.

On top of that, we have Strike mode, which features a varying objective played out between two teams. These objectives usually range from retrieving an object and bringing it back to base or destroying an objective. This is my second favorite mode, mostly because it focuses the battles into closer quarters without losing that tactical and objective based gameplay. It’s fun to gamble and try and discern where the enemy has posted up around the objective and try to take them out, and the intensity I feel when an objective is nearing completion is addictive. Mos Eisley and Takodana are my two favorites for that mode, as their map design really lend well to Strike’s gameplay.

Starfighter Assault plays out a lot like Galactic Assault with starfighters. There’s an objective that you must accomplish with the opposing team attempting to stop you. It’s not my favorite mode, although I definitely like it more in this game than the previous. The flight controls feel a lot smoother and more responsive, so dogfighting feels appropriately quick and fluid. Flying around giant Star Destroyers, duking it out with Tie Fighters and Darth Maul’s Scimitar is so tense and exhilarating. I definitely recommend checking this mode out, even if you didn’t like the dogfighting in the last game, it’s definitely improved. 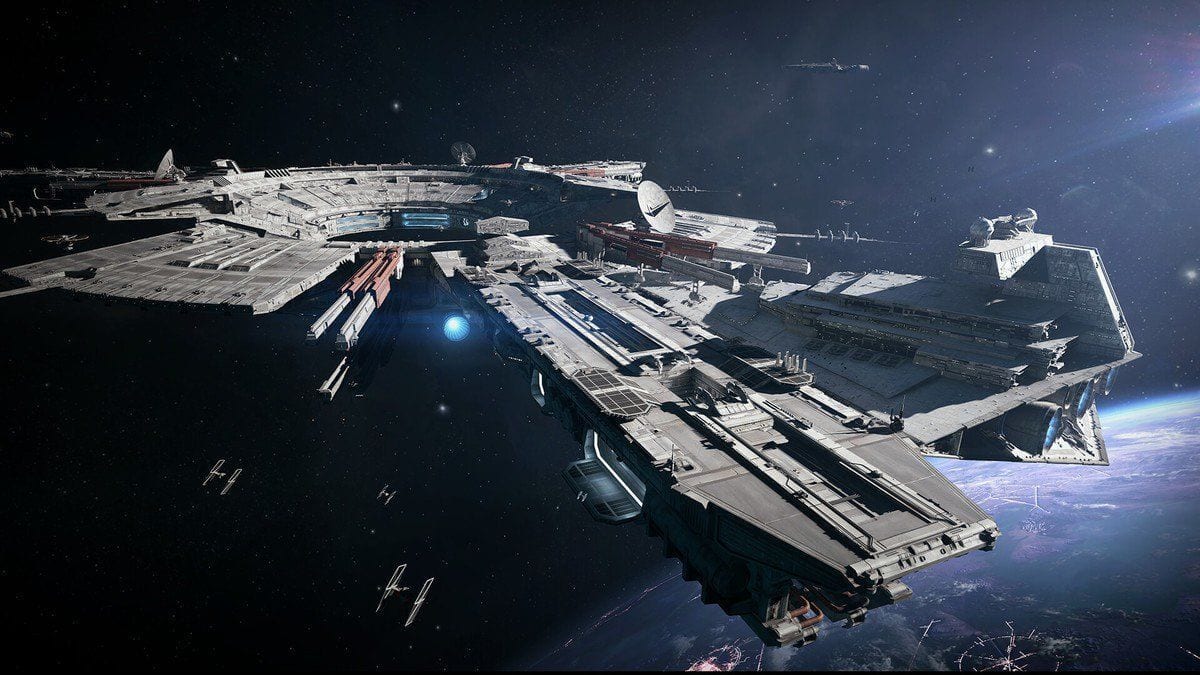 Heroes Versus Villains is a returning mode, although it has been retooled pretty effectively. In Battlefront (2015), you’d have a set number of heroes in a larger match, the players who got to use these heroes was determined at random, and those who were unlucky had to play as normal foot soldiers. In Battlefront II (2017), it’s only hero characters versus villain characters in 4v4 battles. Not only is this more fun, but it also allows everyone to play as a villain as long as you have them unlocked.

Speaking of unlocks, let’s talk about the progression system in multiplayer. The previous game was straightforward. Perform in matches, get XP, level up and gain mostly cosmetics and credits. You used said credits to purchase star cards and used those star cards to level them up. In this game, that progression system has changed, and I don’t particularly think its an improvement. Now you level up in order to reach a level cap, and the only real purpose that serves is to allow you to craft higher quality star cards. You complete milestones and compete in matches to earn credits, crafting parts, and even loot crates. The only way you get star cards is through these loot crates, and the only way to level them up is through crafting. Weapons are earned through milestones, generally an allotted number of kills. This is the most straightforward aspect of the progression. You also have a separate level for your class, which is only progressed by collecting more star cards, which is the only way to expand your allotted star card slots. Bringing in the class system makes this all the more puzzling, as it might have just been simpler to link the progression to your overall level and your class level like in Battlefield. Performing as your class to earn star cards for that class as well as weapons. This is an odd issue to have, as the skeleton of the progression in the previous outing was a good foundation to build off of, not practically throw away entirely. 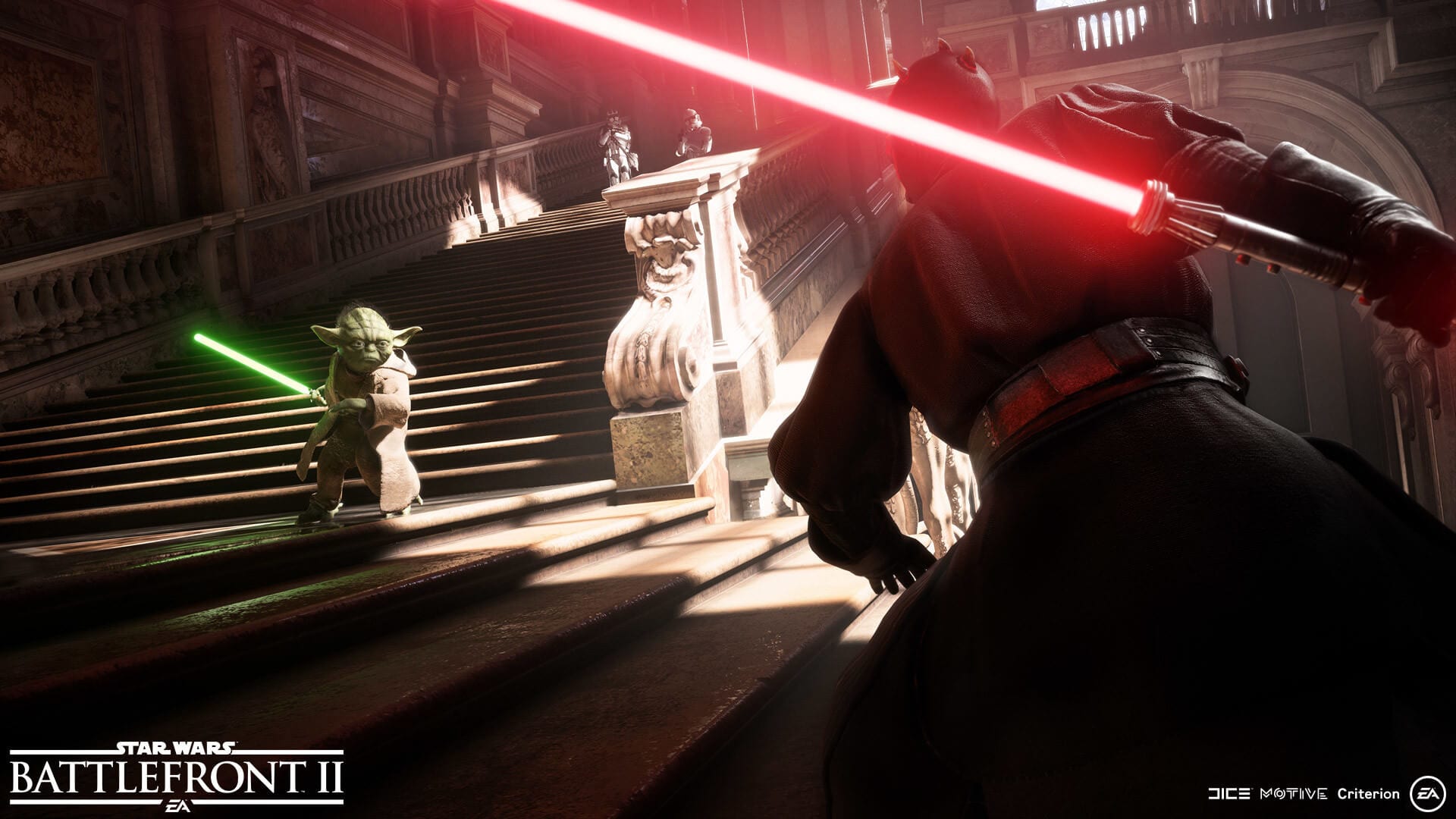 Another new addition is Arcade Mode, in which players are given a set of tasks and handicaps with a reward of credits waiting for them on the other side. I’ve dipped my toes into the mode a couple of times and had a good time with it, though more than likely it’s not a mode I see myself coming back to beyond the monetary reward. The various missions allow you to take control of enforcer units and hero characters such as Kylo Ren and Darth Maul. In the matches I played, it tended to be a “kill X amount of enemies in X amount of time.” It’s a nice addition, and for those who are completionists, it will definitely give you a challenge. The third tier of the missions I have played are extremely difficult.

This brings us to the campaign. The story centers on Iden Versio, an Imperial commander, and leader of Inferno Squad, an elite special forces unit. After the destruction of the second Death Star, and the death of Emperor Palpatine, she must battle to maintain order over the empire…at least that’s what the story they sold in the trailers was. The reality was entirely different. No spoilers obviously, but the story takes a pretty predictable turn an hour or so in. I’m fine with that turn, but my main issue with this campaign is the lack of tangible character work with Iden or the Inferno Squad. Before you come with your torches and pitchforks, I’m aware that there is a canon novel that serves as a prequel to the game and I’m actually in the process of reading it now. The problem is that I shouldn’t have to read that book to get the full picture here. There are several plot points that I found myself disconnected with because the writers didn’t take the time to truly tell Iden’s story, rather than fill the campaign with a few too many hero missions. Look, I love playing as Luke Skywalker, Han Solo, and other amazing heroes from this galaxy, but I booted up the campaign to play IDEN’S story. The story they sold to me in the trailers. If they had removed the hero missions, or added in more character development for Iden, Brask, and Del instead, I’d have been much more pleased with the campaign, especially given that Iden is interesting and well acted by Janina Gavankar. The ending is also incredibly jarring despite ending on an AMAZING final two missions. I’m aware that we’ll be getting more story content as soon as next month, but this doesn’t excuse a campaign that feels unfinished to me. I will say, however, that there are some fantastic set pieces in the campaign, such as mounting the turret of an AT-AT or taking down gigantic ships in starfighter battles, large-scale firefights in locations we haven’t seen before or in quite a while. As it stands, the campaign is a solid, if disappointing Star Wars experience.

Beyond the disappointing campaign and misguided progression, the only other gripes I really have are pretty small. This game looks and sounds amazing, but there are moments when some of the effects don’t look up to snuff. There are some explosions that don’t look like they belong on this generation of hardware. There’s pixilation, and at times it doesn’t look like the effect meshes with the environment very well. There are a couple of scenes in the campaign that are in game that featured some odd looking faces on some characters. Finally, every time I leave a match, the game tells me that I disconnected from EA’s server. The only reason this doesn’t bother me all that much is that it thankfully doesn’t cancel out any progress I made in my matches, it’s just an odd occurrence. 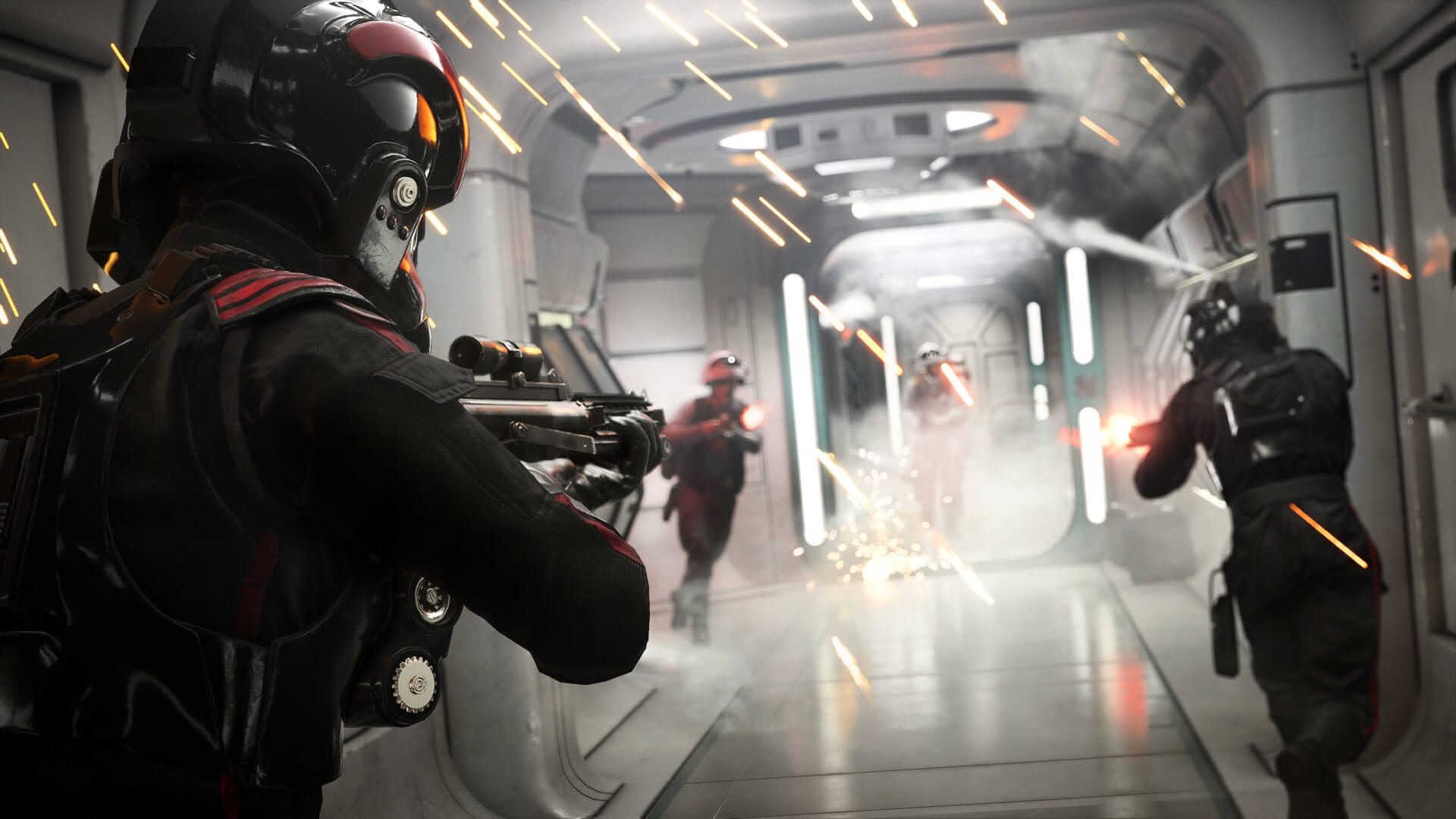 One final aspect of the game worthy of discussion is the loot crate system. In game, there are three types of loot crates: Trooper, Starfighter, and Hero crates. Each of these crates provides star cards, emotes, and victory poses for their respective areas. Pre-Launch, there was a big hoopla about the microtransactions, as you could purchase crates with real money and, by chance, get yourself an elite star card that made you hilariously overpowered to those of us who either abstain from purchasing loot crates or those of us who don’t have money to spend. As much as I understand everyone’s anger over this, and I’m glad that DICE and EA have temporarily removed these microtransactions from the game, I didn’t find any situation in which I felt slighted because I didn’t purchase loot crates. The majority of the time I died, which was frequently, I was killed by players with lower tier cards. Skill generally won out over star cards. That being said, that was before the full launch of the game. For all I know, in the hands of a much larger player base, this could have been a big issue. I’m glad we currently don’t have to find out until DICE retools the system to balance it out.

Overall, Star Wars Battlefront II (2017) is a great multiplayer experience that truly drops you into the universe you know and love. Is it perfect? No, the campaign is rather disappointing, wasting an interesting lead and actor on a lot of fan service, as well as a somewhat confusing and overcomplicated progression system. But for every negative moment, I felt during my hours of play; I’d have another moment where I’m on fire taking down Rebel scum or destroying First Order Flametroopers that felt so good that I can’t help but recommend this game to every single Star Wars fan I can.

What did you think of Star Wars Battlefront II (2017)? Let me know in the comments below! Stay nerdy everyone!

Star Wars Battlefront II is an improvement over its predecessor, with fantastic immersion, great gameplay, and strong map design.